The Minnesota Breeding Bird Atlas (MNBBA) used two complementary methods for gathering data on breeding birds of the state: 1) traditional, volunteer-based sampling, and 2) breeding bird point counts.  The primary purpose of the volunteer network was to identify the breeding bird species present and their breeding status within the selected northeast quadrat (priority block) for each of approximately 2300+ townships in the state of Minnesota. Volunteers could also gather data from any block within the state. With volunteer sampling, it is difficult to standardize the gathering of data on time of sampling, level of effort, and observer ability. Each of these requires a more rigorous, systematic approach to better assess habitat relationships, species relative abundance, and to detect bird population change over time.  Each individual gathering point count data were also expected to record their observations outside of the point count periods both within the priority blocks and in transit between priority blocks.  These observations were entered in the same fashion as the volunteers.

Two examples highlight the importance of these complementary approaches.  Volunteer efforts are of immense importance in gathering data for an atlas because it allows for extensive coverage of the state by participants with high skill levels. These efforts also allow individuals to gather data close to their homes and in their backyards. In contrast, volunteer efforts can result in uneven coverage of the state because they focused on urban centers or data gathering may be center on the “best” birding places. In addition, the skill levels of volunteers can vary considerably.

The goal for including a network of point counts to gather breeding bird atlas was to insure equal and consistent coverage across the state of Minnesota. This included a random sampling approach and standardization of effort in gathering data within each township.  Individuals participating in the gathering of point counts were also required to pass a test of 86 bird species songs or have more than 5 years of field experience in counting birds with point counts in Minnesota. Those gathering data on point counts were also tested by audiologists to insure their hearing ability was in normal ranges and they participated in three days of “standardization” in point count data gathering with an experienced field ornithologist.

Specific objectives to be addressed by the point count protocol for the Minnesota Breeding Bird Atlas included the following.

The basis for the systematic, point count protocol is a 10 minute observation/listening period with observations divided into 1 minute intervals.  The basic technique has been developed and used by our group over a 20 years [e.g., National Forest Bird Monitoring Program (Hanowski and Niemi 1994, 1995; Howe et al. 1998; Hanowski et al. 2005, Niemi et al. 2016)]. The point count method of gathering data on breeding birds has been incorporated into many standard protocols across North America (e.g., Ralph et al. 2005, Knutson et al. 2008). We have also completed an extensive analysis on detection for breeding bird species that have differences in their detectability in which excellent results using this technique were achieved (Etterson et al. 2009). The method is an effective technique for gathering standardized data in a time-efficient fashion.  Most importantly, it allowed systematic data to be gathered from the entire state of Minnesota.

During a 10-minute point count, all birds seen or heard are recorded (e.g., unlimited distance) but distances from the point are estimated to allow habitat-specific data to be used (e.g., observations within 25, 50, 100 m, and > 100 m of the census point).  Point counts were completed from the last week of May (in southern MN) to the second week of July (northern MN), but most counts were be completed in June.  Point counts were completed from approximately 0.5 hour before to four hours after sunrise on days with little wind (< 15 km/hr) and little or no precipitation. Extensions from sunrise to 6 hours were allowed for counts in western MN due to the high proportion of windy days and based on the experience of ornithologists in that region. All points were located and marked with a geo-positioning system (gps), cover type of vegetation visually estimated, and pictures taken in the two directions perpendicular to the road.  In addition, incidental breeding evidence was recorded using the MNBBA breeding evidence codes.  All data and pictures were entered into an online database. In cases where the point count was not gathered from a road, four pictures were taken in each of the four major cardinal directions (North, South, East, and West).

Prior to the field season, tapes of MN bird songs were provided as a learning tool, and all observers were required to pass an identification test of bird songs for 86 species.  In our previous efforts, a standard for number of correct responses was established by giving the test to observers who were trained in identifying birds by sound and who had four to five years of field experience. This was done to identify songs that were not good representations of songs heard in northern Minnesota or Wisconsin. Based on the results of trained observers, the standard for passing was set at 85% correct responses. Songs on the tape were grouped by habitat (e.g. upland deciduous, lowland coniferous) to simulate field cues that would aid in song identification.

Observer field training was also conducted in late May. Observers completed simultaneous practice counts at several points used in the monitoring program. Data were compiled for each observer. These species lists and numbers of individuals recorded on these counts by each observer were compared to those of an experienced observer. Deviations in the number counted or species missed were noted and discussed in the field.  In addition to field training and testing, all observers were required to have a hearing test to ensure that their hearing was within normal ranges, as established by audiologists, for all frequencies (125 to 8000 hertz).

The overall goal was to sample within the priority block from each of the approximate 2300 townships in Minnesota over a five year period (2009-2013).  A restricted, random process was used for selection of regional areas and within these regional areas townships were selected for sampling (Figure 1).  Restricted random sampling was used because a purely random sample would be unrealistic due to logistical and practical considerations.  For instance, it was unrealistic and too time consuming to force samples to be gathered too far from suitable access points, especially in areas with few roads.  It also was not reasonable to gain permission and access to points on private lands.  In most cases, we strived to have points sampled on smaller roads or trails as long as there was minimal interference from the road (Hanowski and Niemi 1995).

In the initial 2009 field season, three-two person field crews were used.  Each team was selected to sample each of three broad regional areas of Minnesota: the northern forested regions, the western agricultural-grassland region, and the southeastern urban-transition forest region (Figure 1). These three regions provided initial information on any problems with this design that we may encounter throughout Minnesota during the initial 2009 season with the exception of the extensive roadless areas of the Boundary Waters Canoe Area Wilderness (BWCAW) and the Red Lake Peatland (RLP). Sampling in the BWCAW and

RLP were delayed until 2010.  Based on the 2009 sampling effort, it was determined that 3-5 townships could be sampled by one individual in a morning.  For instance, in areas when there was an extensive road network within a township, five townships could be sampled in a morning.  However, it was also necessary to visit each site the previous day or earlier so sampling in the morning could be accomplished in an efficient manner.  In 2009 the crews sampled over 540 townships.  Given this level of effort, it was estimated that we could sample all of the accessible townships within a five year period.

As described above, within each priority block of a township the goal was to sample three points per township. Sample points were identified using a two stage process.  Geographic information system (GIS) analysis w

as used to identify candidate points for all townships before entering the field.  Once in the field, protocols were followed to determine if the point needed to be moved based of field level observations.

Every survey point was verified for accessibility and appropriate habitat representation during site reconnaissance periods that occurred a minimum of one day ahead of the actual survey day.  Field maps were printed which showed the GIS generated points on aerial imagery.  The GIS generated points were also downloaded onto gps units.  Points could be identified as unacceptable in the field for the following reasons:

If a random point had to be moved, the following rules were used IN SEQUENCE to locate a new random point position, but the random point must remain within the prio

If the dominant and subdomina

nt habitat points were not located in the appropriate habitat type to which it was assigned, the point was moved to the appropriate habitat type.  Sample target habitat types were defined as a minimum of 40 % or more of the survey area (100 m radius circle).  Moving these points relied on the counters judgment, but the following rules were followed IN SEQUENCE and the points remained within the boundaries of the priority block.

Inaccessible priority blocks were sampled differently than those with roads.  An inaccessible block was defined as a priority block with no public roads. This was a common situation in the Boundary Waters Canoe Area Wilderness (BWCAW), Red Lake Peatlands (RLP), and a few other areas in Minnesota.  In these situations, access via water (canoe or boat), trails (ATV or bike), or in the case of the RLP we used MN DNRs “Marsh Master” were used to gain access to the block.  The most convenient access point within a priority block was identified.  The random point was selected from the closest foot-accessible location where observers started their morning survey (e.g., along a trail or portage).  Dominant and sub-d

ominant habitat types were defined based on the NLCD data base and were selected a priori from the access point with the same distance restrictions as described above. These locations were usually re-located based on ground reconnaissance.  In some cases the habitat types identified a priori were unsuitable, so the same criteria were applied to identify another suitable habitat type for the point; however, instead of using public roads, considerable latitude was given for the use of portages or other access venues (e.g., canoe, boat, bike, etc.). 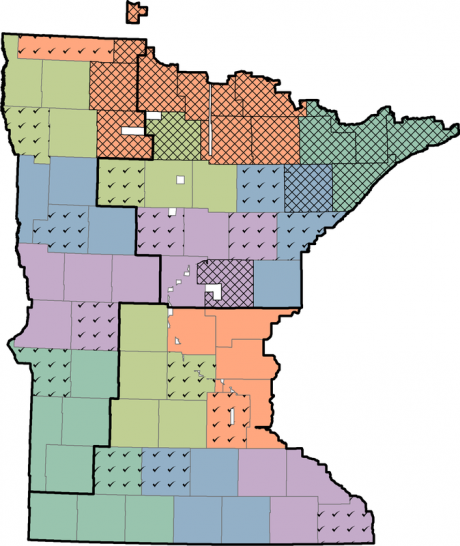 Figure 1. Three broad regions were identified in the state to distribute the effort for gathering point counts over a five year period. These areas were the northeast, southeast, and western regions. Each region was divided into approximately equal 36-township clusters with each cluster including five regional strata (e.g., those with similar color). The five-36 township clusters were selected to represent the five years (2009-2013) in which sampling would occur in the Minnesota Breeding Bird Atlas. Those randomly selected for sampling in 2009 within each region are identified as those with check marks. Areas with too many inaccessible townships were identified with cross-hatching and were defined as those with 5 or more inaccessible townships out of the 36 possible townships within a cluster. These areas were sampled over four years from 2010 to 2013. 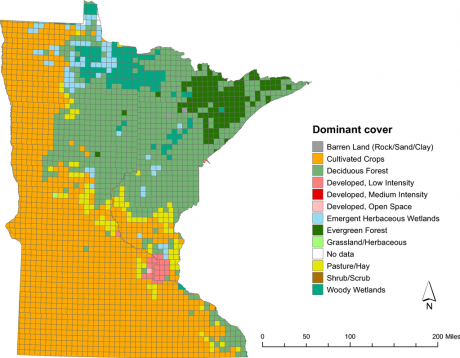 Figure 2. Dominant habitat types within each township in Minnesota. 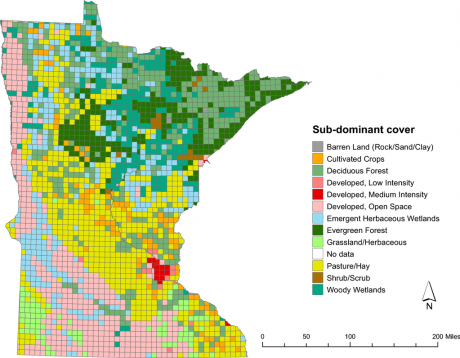 Figure 3. Second-most dominant habitat type within each township in the state of MN.