A regular breeding resident and migrant; one winter record in Minnesota in 1994. The hummingbird was a common species during the Minnesota Breeding Bird Atlas (MNBBA).

Although many hummingbird species are found in the western United States, the Ruby-throated Hummingbird alone occupies the eastern United States and southern Canada, its range closely mirroring the distribution of the eastern deciduous forest. The species is sparsely distributed throughout its breeding range, with some of its highest densities found in Tennessee, southern Missouri, and northern Arkansas (Figure 1).

A medium- to long-distance migrant; most birds winter in Central America.

Open-cup nest usually placed in deciduous trees and shrubs; often near or directly above water. 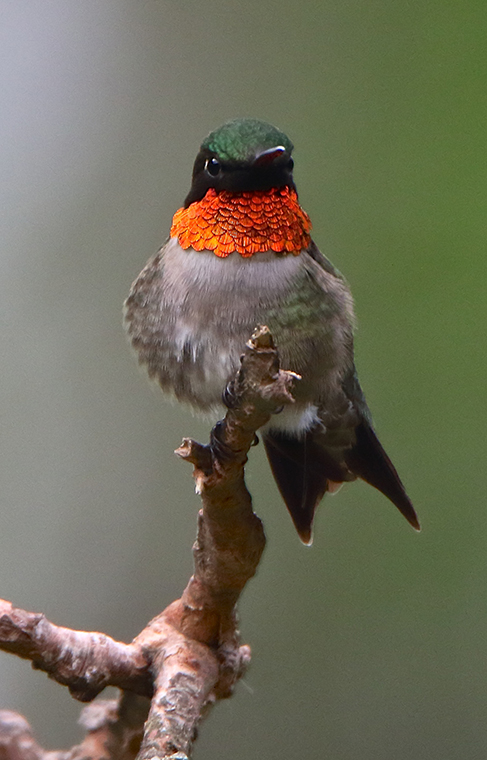 Breeding distribution and relative abundance of the Ruby-throated Hummingbird in North America based on the federal Breeding Bird Survey, 2011–2015 (Sauer et al. 2017).

“This gem among Minnesota birds, the tiniest of them all,” Roberts (1932) wrote, “is a common, at times abundant, summer resident in all parts of the state It is present alike in the groves of the prairie region and the open glades and the burned-over areas of the heavy forests.” Confirmed nesting records (nests with eggs or young) were available from 6 counties: Fillmore, Hennepin, Kittson, Ramsey, Scott, and Sherburne. Reports of nests were available from Cass and Goodhue Counties and Itasca State Park. Roberts’s account went on to marvel about the rapid beat of the hummingbird’s wings, the “fantastic performance” of the male’s courtship flight, and the architectural accomplishments of the female in constructing a “marvelous and exquisite little nest.”

Forty years later, Green and Janssen (1975) confirmed the Ruby-throated Hummingbird’s status as a statewide resident, reporting that the species could be found breeding in all regions of the state. Janssen (1987) would later add that it was most abundant in northern Minnesota, gradually becoming less common as one moved further south, and becoming “rare to absent” in the south-central and southwestern counties. Nesting was confirmed in 18 counties since 1970, largely stretching from the southeast corner of the state northwest to Koochiching and Roseau Counties and in southwestern Minnesota in Brown and Cottonwood Counties. Hertzel and Janssen (1998) added 7 more counties to the list of confirmed nesting.

Field biologists working with the Minnesota Biological Survey (MBS) have reported a total of 276 Ruby-throated Hummingbird breeding season locations. The largest number of reports was in the Laurentian Mixed Forest and Eastern Broadleaf Forest Provinces. Absent from the Red River Valley Section, there were scattered reports in the Tallgrass Aspen Parklands Province, along the Minnesota River valley, and in southwestern Minnesota (Minnesota Department of Natural Resources 2016).

During the MNBBA, observers reported 1,575 Ruby-throated Hummingbird records in 24.2% (1,146/4,744) of the surveyed atlas blocks and in 32.9% (769/2,337) of the priority blocks. Breeding was confirmed in 114 blocks (Figures 2 and 3; Table 1). The birds were found in 81 of Minnesota’s 87 counties and were documented breeding in 38 counties. Once again, the hummingbird was most abundant in the Laurentian Mixed Forest and Eastern Broadleaf Forest Provinces. There were a far greater number of records in the Tallgrass Aspen Parklands and in the Prairie Parkland Provinces, particularly in west-central Minnesota, than reported by the MBS. Common throughout the eastern half of Minnesota, its distribution became sparse heading westward. Although the extensive peatlands of north-central Minnesota and the agricultural landscape of western Minnesota provide less suitable habitat, small scattered woodlands and residential areas provide a haven for the species, especially when backyard feeding stations are provided.

MNBBA data were used to develop a model that predicts the probability of encountering hummingbirds throughout the state (Figure 4). Although it is a reasonable depiction of where the atlas reported many of its observations, it emphasizes the species’ relatively low breeding density throughout its summer range.

Almost one hundred years ago, Roberts (1932) specifically noted the Hummingbird’s presence in the prairie regions of the state; fifty years later Janssen (1987) commented on its rarity and near absence in the southwest and south-central regions. Today, it again appears to be a regular but quite uncommon species in the region. The small‑scale farming operations of the early twentieth century may have provided limited but suitable habitat for the species that disappeared as the intensity of agricultural practices increased and residential development expanded. The reappearance of the species in these regions may reflect more interest on the part of landowners to provide hummingbird feeding stations.

Throughout its breeding range, local populations likely have benefitted from landscape plantings that attract hummingbirds and the placement and maintenance of hummingbird feeders. Apart from small-scale changes in the species’ abundance and distribution, however, there is little evidence of any large-scale distributional change (Weidensaul et al. 2013). Atlas work conducted in neighboring states and provinces, such as Ontario (Cadman et al. 2007), Iowa (Iowa Ornithologists’ Union 2017), and Wisconsin (Cutright et al. 2006) also have not detected any distributional changes. 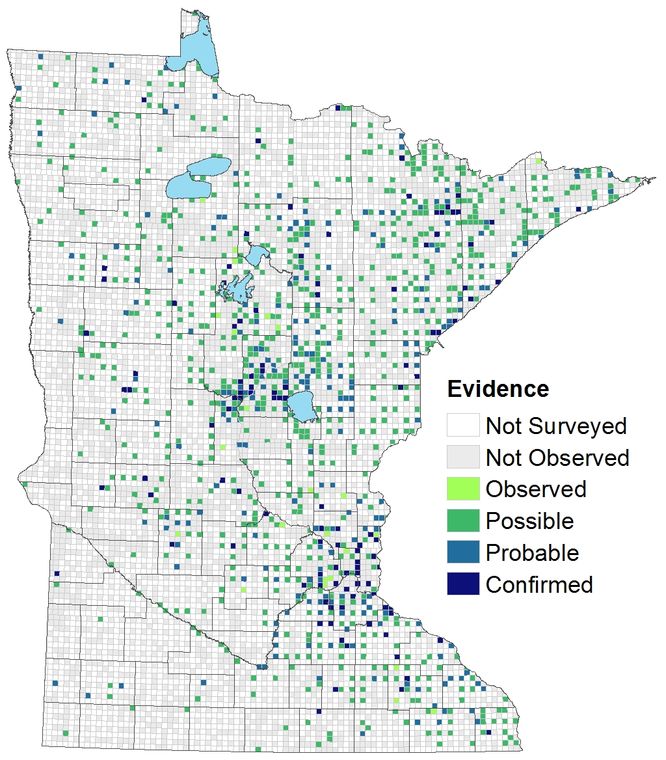 Breeding distribution of the Ruby-throated Hummingbird in Minnesota based on the Breeding Bird Atlas (2009 – 2013).

Summary statistics of observations by breeding status category for the Ruby-throated Hummingbird in Minnesota based on all blocks (each 5 km x 5 km) surveyed during the Breeding Bird Atlas (2009-2013).

Summary statistics for the Ruby-throated Hummingbird observations by breeding status category for all blocks and priority blocks (each 5 km x 5 km) surveyed during the Minnesota Breeding Bird Atlas (2009-2013). 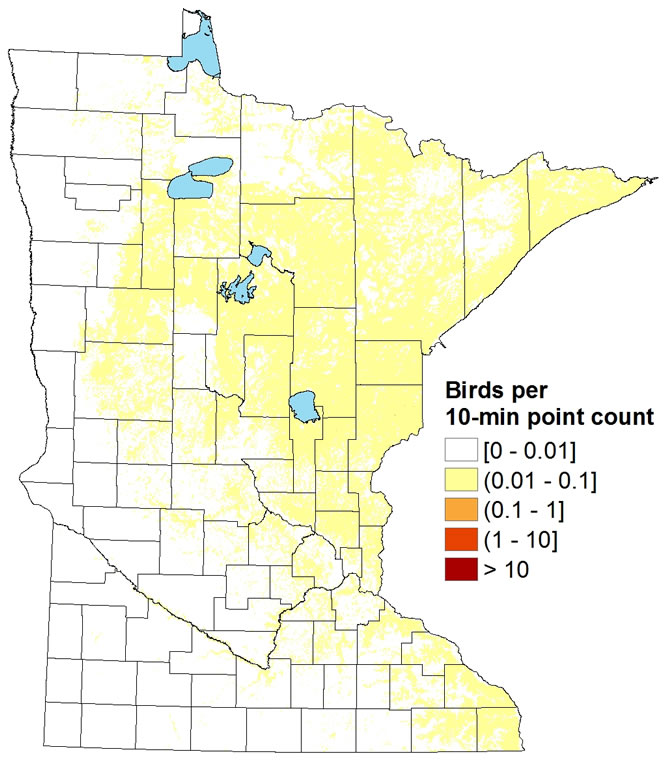 Predicted breeding distribution (birds detected per 10-minute point count) of the Ruby-throated Hummingbird in Minnesota based on habitat, landscape context, and climate data gathered during the Minnesota Breeding Bird Atlas (2009-2013) using the General Linear Modeling method without an adjustment for detectability.

Generally characterized as an inhabitant of open woodlands, the hummingbird occupies a variety of habitats ranging from mature deciduous or mixed forests to more open woodlands, parks, orchards, and gardens (Figure 5). It is also found in woodland groves in predominantly agricultural regions. Proximity to water may be an important habitat requirement (Natural Resources Conservation Service 1999). In Minnesota it has been documented in mature aspen, mature maple-basswood, and mature elm-ash-cottonwood stands (Danz et al. 2007).

In the long-term National Forest Bird (NFB) Monitoring Program on the four national forests in northern Minnesota and Wisconsin, the hummingbird was more closely associated with small towns and communities scattered across the forested landscape. As a confirmation with the 1999 observation about water proximity, the species was also closely tied with water on the national forests as well as with dry open oak forests (Niemi et al. 2016).

Habitat data collected within 200 m of MNBBA point counts where the Ruby-throated Hummingbird was detected enable a broader characterization of the species’ habitat preferences across the state. Although the strongest association was with oak forests, northern hardwoods, and northern mixed forests, the species was associated with a variety of other habitats as well (Figure 6). 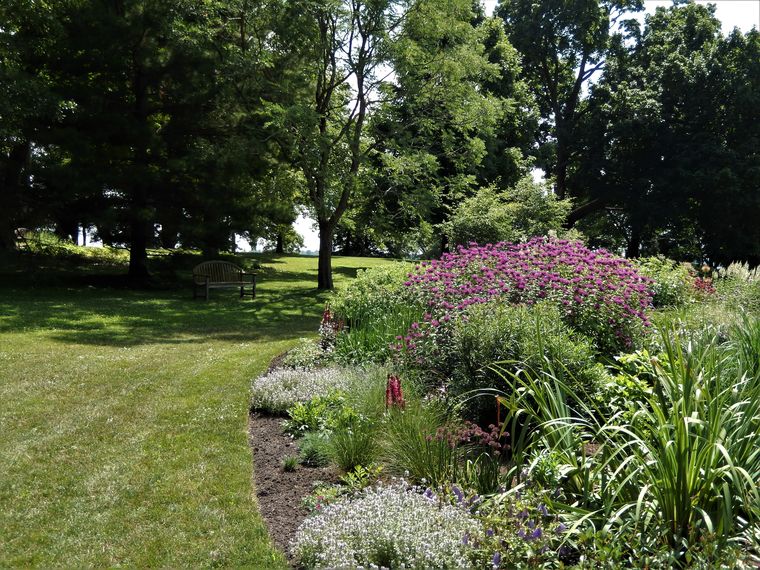 Typical breeding habitat of the Ruby-throated Hummingbird in Minnesota (© Lee A. Pfannmuller).

Habitat profile for the Ruby-throated Hummingbird based on habitats within 200 m of point counts where the species was present during the Minnesota Breeding Bird Atlas (2009-2013).

Data collected by the federal Breeding Bird Survey (BBS) have been used to generate a 2016 continental population estimate of 34 million breeding adults (Rosenberg et al. 2016). In 2013, Minnesota was estimated to support 1.5% of the continental population (Partners in Flight Science Committee 2013). Applying that percentage to the current population estimate suggests that Minnesota supports approximately 500,000 breeding adults.

Because the hummingbird has such a low relative abundance on BBS routes, the population trend line lacks precision at both the national and state level. North Carolina is the only state where the trend line is statistically robust, demonstrating a relatively stable population. Survey-wide, data that are available suggest a significant and steadily increasing population trend since 1966 (an average annual increase of 1.44% per year). Local populations are stable or increasing in every region with the exception of the lower Mississippi River Alluvial Plain. In Minnesota, the BBS data show a nearly identical trend line to that observed at the national level (Sauer et al. 2017). The hummingbird, however, is not a species that is well detected by the field protocol of the BBS, so trends need to be interpreted with caution.

More intensive monitoring in the Chippewa National Forest further corroborates these national and statewide trends. From 1995 to 2015, the species increased an average of 2.06% per year (Figure 7). The species was not common enough in the Superior National Forest to detect a trend (Zlonis et al. 2015; Niemi et al. 2016).

States that have conducted more than one atlas, particularly in the New England region and in Ontario, have consistently reported an increase in records for the Ruby-throated Hummingbird between the first and second atlas. Pennsylvania, for example, saw an 11% increase in the number of atlas blocks where hummingbirds were reported between the first atlas, conducted between 1983 and 1989, and the second atlas, conducted between 2004 and 2009 (Weidensaul et al. 2013). Ohio, however, documented a 5% decline in block occupancy that researchers believed was “driven by blocks within southern counties, where forest maturation has been extensive” (Rodewald et al. 2016). Greater interest in backyard landscaping and bird feeding likely has contributed to the observed increase in many regions. 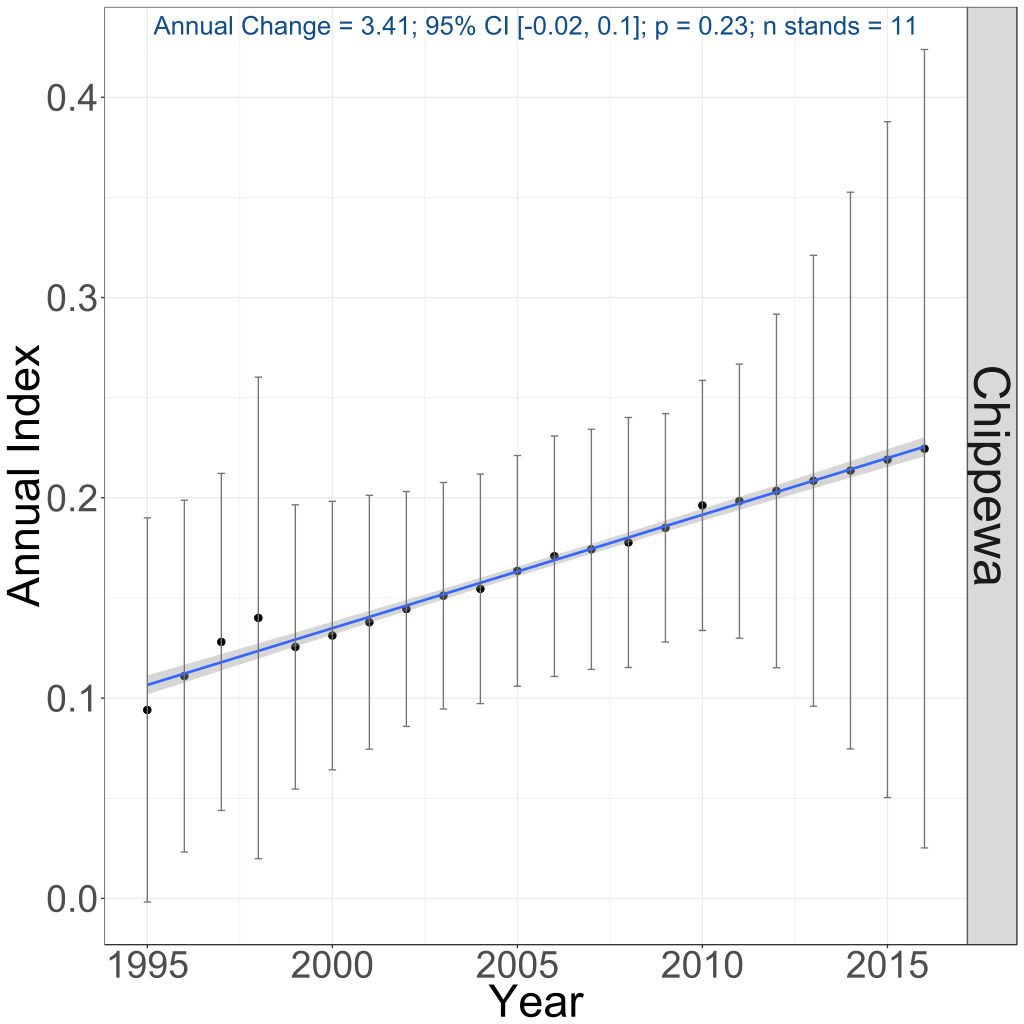 Given its overall stable population status, the Ruby-throated Hummingbird has not been the focus of any concerted conservation effort at either the federal or state level. Its Continental Concern Score reflects this low concern 8/20 (Rosenberg et al. 2016).

Predictions about how the species will respond to warming temperatures are mixed. The State of the Birds 2010 Report on Climate Change rated the species as having a medium vulnerability to warming temperatures (North American Bird Conservation Initiative 2010). A 2004 assessment, using two different climate models, predicted that populations would increase in the Midwest but decrease in southern states (Matthews et al. 2004).

An abundance of resources are available to encourage and instruct homeowners on methods to attract hummingbirds, including specific plants to incorporate in the landscape and guidance on establishing feeding stations (e.g., Natural Resources Conservation Service 1999; Henderson 1994; Stokes and Stokes 1989). Although some have claimed that feeding hummingbirds in the fall may delay migration south, no evidence supports this theory (Weidensaul et al. 2013).

This little jewel of the sky, with its iridescent feathers, hovering flight, and remarkably long bill, is a wonderful example of natural adaptation. Beloved by backyard bird enthusiasts, it is likely to remain a common member of Minnesota’s avifauna for years to come.