A regular breeding resident and migrant that occurs in open forests throughout much of the state. The Warbling Vireo was a common species during the Minnesota Breeding Bird Atlas.

A medium- to long-distance migrant that spends winters in western Mexico and northern Central America.

A compact open-cup nest usually placed high within a deciduous tree or shrub and some distance from the tree trunk. 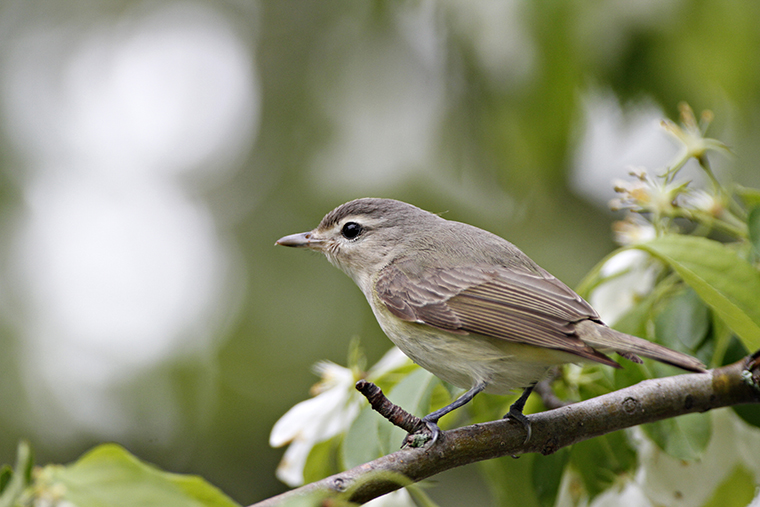 Breeding distribution and relative abundance of the Warbling Vireo in North America based on the federal Breeding Bird Survey, 2011-2015 (Sauer et al. 2017).

Roberts (1932) considered the Warbling Vireo to be a common species throughout much of Minnesota in the late 1800s and early 1900s. It was “most abundant in open woodlands, preferring small groves of poplars and elms, in orchards or on tree-bordered country roads, and is one of the common birds of city parks and shaded streets.” In the grasslands of southern and western Minnesota, “every grove and tree-claim has its quota of Warbling Vireos.” Roberts wrote at length about the species’ history in Minnesota’s northern forest region, documenting a long list of early explorers and naturalists, including himself, who failed to find the species in the region in the late 1800s. The earliest report was in 1902, when a single bird was encountered in the town of Walker, on the west side of Leech Lake. In the years that followed, reports began to document the species’ gradual appearance in small settlements and cleared areas as far north as Crow Wing, Itasca, Lake of the Woods, and Pine Counties. Roberts predicted that it would be only a matter of years before the Warbling Vireo would likely become a more common inhabitant of the north country. At the time of his publication, however, confirmed nesting reports (nests with eggs or young) were limited to just 6 counties south and west of the boreal forest region:  Goodhue, Hennepin, Polk, Sherburne, Traverse, and Wright.

Indeed, more than 40 years later, Green and Janssen (1975) documented summer records for the Warbling Vireo from nearly every county in the state. Nevertheless, it remained rare in the far north-central and northeastern counties, where breeding records were virtually absent. A few years later, Janssen (1987) included a distribution map in his updated account that depicted the species as a breeding resident everywhere except the Arrowhead region north and east of Duluth and in much of Koochiching and eastern Itasca Counties. He identified 22 counties where nesting had been confirmed since 1970. Records indicated the species was most abundant in east-central and southeastern Minnesota. By 1998, Hertzel and Janssen had identified a total of 26 counties where nesting had been confirmed since 1970.

Beginning in the late 1980s, the Minnesota Biological Survey (MBS) documented 744 breeding season locations for the Warbling Vireo. Included were several records in St. Louis County and 1 along the North Shore of Lake Superior in Cook County. Elsewhere the species was relatively common in all but the most intensively cultivated regions of the Red River valley and the upper Minnesota River valley (Minnesota Department of Natural Resources 2016).

During the MNBBA, participants reported a total of 2,409 Warbling Vireo records in 34.2% (1,624/4,754) of the surveyed atlas blocks and in 47.1% (1,101/2,337) of the priority blocks. Breeding evidence was documented in 42 blocks (Figures 2 and 3; Table 1). The birds were reported from all but 2 of Minnesota’s 87 counties: Lake and Cook. Breeding was confirmed in 28 counties. Eighteen of the counties were additions to the list published by Hertzel and Janssen (1998), and most were located in western and southern Minnesota. Although the species was least common in the northeastern forests and north-central peatlands, it was reported throughout much of the remainder of the state, including the intensively cultivated regions of western and southern Minnesota.

The predicted distribution map for the Warbling Vireo suggests that the core of the species’ breeding range lies within west-central and northwestern Minnesota, from Lac qui Parle and Yellow Medicine Counties north to Kittson and Roseau Counties (Figure 4). Small pockets of relatively high breeding densities are found scattered throughout the Tallgrass Aspen Parklands Province. The open, park-like landscape of this region provides ideal habitat for this obscure little vireo. Outside of this core area, moderate densities can be found along the Mississippi River valley south of the Twin Cities and throughout central Minnesota. Relatively low breeding densities are predicted throughout much of the Laurentian Mixed Forest Province.

Roberts’s (1932) prediction that the Warbling Vireo would become a more common inhabitant of the north country was correct. This is especially true in the recreational communities near the cities of Brainerd, Grand Rapids, and Bemidji (Figure 2). It remains a rare species, however, in the densely forested landscape of Lake and Cook Counties and in the north-central landscapes dominated by extensive peatlands.

Elsewhere in its breeding range there have been few large-scale changes in the vireo’s distribution. This is attributed in part to the paucity of historic information on the species (Gardali and Ballard 2000). The vireo has expanded along the northern periphery of its’ breeding range in Quebec and Ontario, facilitated largely by forest clearing in the late 1800s and 1900s. Other Great Lakes states, including Wisconsin, Michigan, and Ohio, have seen little change in the species’ historic distribution (Gardali and Ballard 2000; Cutright et al. 2006; Chartier et al. 2013; Rodewald et al. 2016; Cadman et al. 2007). In Wisconsin, Robbins (1991) predicted the species would be negatively impacted by the loss of American elms to Dutch elm disease, but the species’ acceptance of a wide variety of habitats has enabled it to adapt to many regional landscape changes. 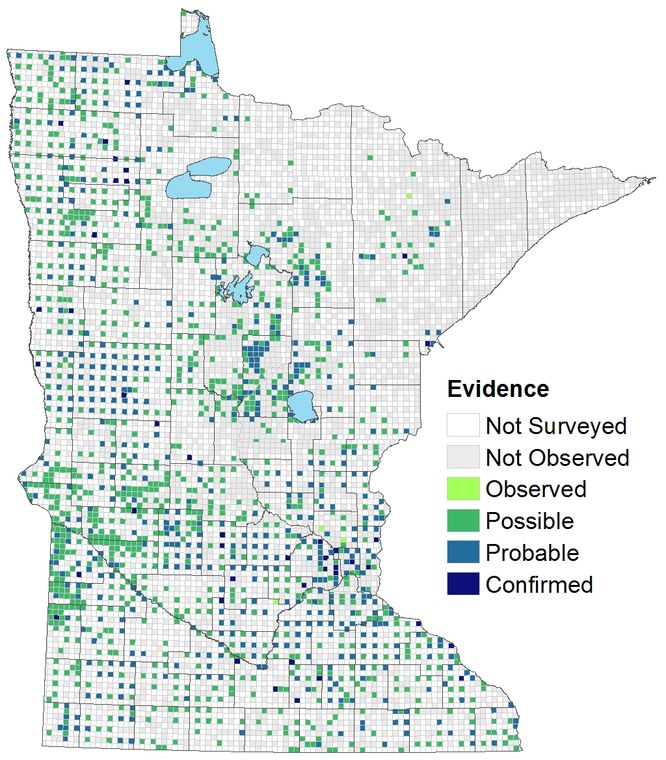 Breeding distribution of the Warbling Vireo in Minnesota based on the Breeding Bird Atlas (2009 – 2013).

Summary statistics of observations by breeding status category for the Warbling Vireo in Minnesota based on all blocks (each 5 km x 5 km) surveyed during the Breeding Bird Atlas (2009-2013).

Summary statistics for the Warbling Vireo observations by breeding status category for all blocks and priority blocks (each 5 km x 5 km) surveyed during the Minnesota Breeding Bird Atlas (2009-2013). 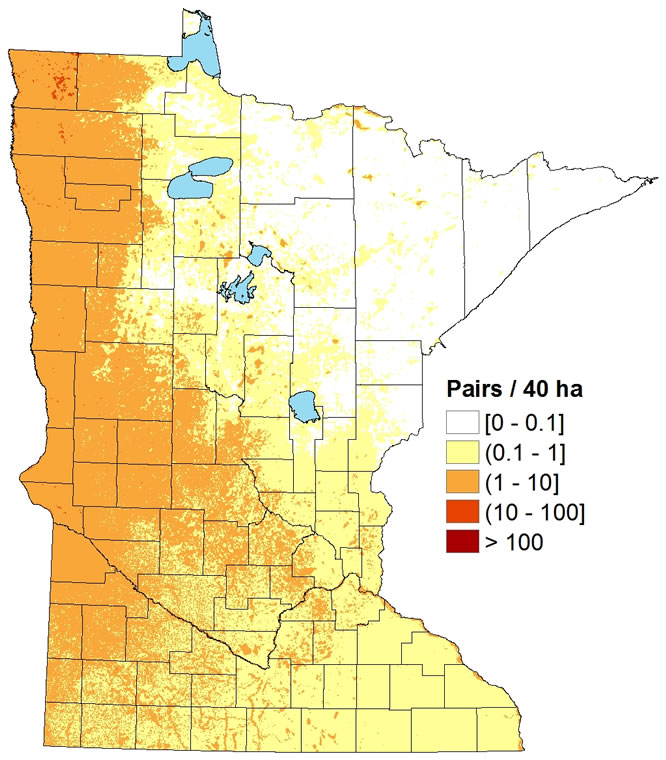 Predicted breeding distribution (pairs per 40 hectares) of the Warbling Vireo in Minnesota based on habitat, landscape context, and climate data gathered during the Minnesota Breeding Bird Atlas (2009-2013) using the General Linear Modeling method with an adjustment for detectability.

The Warbling Vireo is strongly associated with mature deciduous trees, often in open, fragmented habitats bordering wetlands, lakes, and rivers. Open parklands within suburban neighborhoods, orchards, or city parks provide ideal habitat (Figure 5). Small woodlots, far from water, also may be used. The primary requirement is the presence of tall trees embedded in an otherwise semiopen canopy. The structure and composition of the understory vegetation seem to be less important. The birds are rarely found in mixed deciduous or coniferous forest stands (Danz et al. 2007).

In Minnesota’s dense northern forest landscape, Warbling Vireos are most commonly associated with small towns and cities. The species was rarely encountered during the forest songbird monitoring program conducted on the Chippewa and Superior National Forests by the University of Minnesota (Niemi et al. 2016). Habitat data collected at the MNBBA point count locations where Warbling Vireos were reported demonstrate a strong preference for open habitats, including grasslands, wet meadows, and cropland, all habitats where small scattered woodlots are a common feature (Figure 6).

Today the vireo’s association with cityscapes and parklands is so strong that biologists have speculated about its habitat preferences in presettlement times. Its affinity for water may be the strongest clue, suggesting that it was largely a riparian species, drawn to the open canopies of mature trees that line many wetlands, rivers, and lakes (Bent 1950). 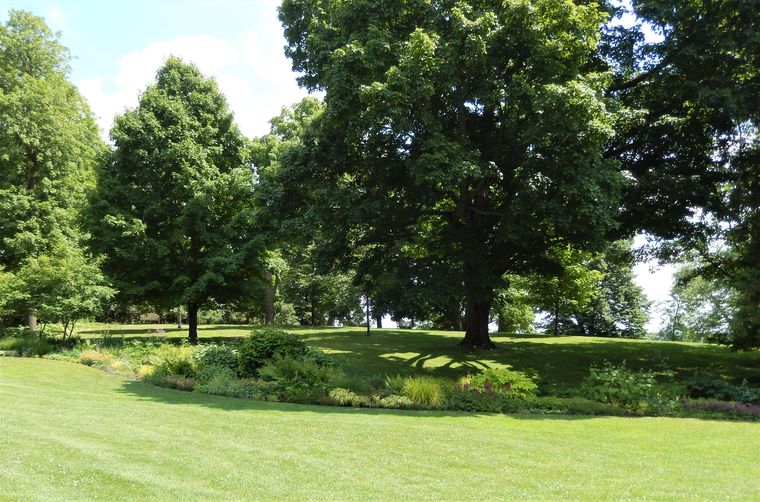 Typical breeding habitat of the Warbling Vireo in Minnesota (© Lee A. Pfannmuller).

Habitat profile for the Warbling Vireo based on habitats within 200 m of point counts where the species was present during the Minnesota Breeding Bird Atlas (2009-2013).

Biologists have used the long-term monitoring data gathered by the federal Breeding Bird Survey to generate a North American population estimate of 53 million breeding adults (Rosenberg et al. 2016). Several years earlier, Minnesota was estimated to support 1.2% of the continental population (Partners in Flight Science Committee 2013). Applying that percentage to the most recent population estimate generates a statewide estimate of 636,000 breeding adults. When MNBBA point count data were used to generate a statewide estimate, the numbers were more than double the BBS estimate, at 1.2 million adults (95% confidence interval of 1.0 – 1.7 million).

Although the Warbling Vireo is a widespread and common species in Minnesota, relative breeding densities are much higher in states and regions farther west. In British Columbia, where the species reaches its highest breeding densities, observers report an average of nearly 24 birds per BBS route conducted in the province. In Minnesota, only 4 Warbling Vireos on average are reported on BBS routes (Sauer et al. 2017). Local breeding densities in other states range from as low as 4.8 pairs per 40 ha in Idaho, to as high as 96 pairs per 40 ha in riparian woodlands in Manitoba (Gardali and Ballard 2000). On the Chippewa National Forest in Minnesota, an average of only 0.01 pairs per 40 ha was found; no birds were reported on the Superior National Forest (Niemi et al. 2016).

Since the BBS monitoring program began in the mid-1960s, Warbling Vireos have demonstrated a significant annual population increase of 0.85% per year in North America (Sauer et al. 2017), resulting in a cumulative increase of 55% from 1970 to 2014 (Rosenberg et al. 2016). Range-wide populations are declining in only four ecological regions, two of which include large segments of Minnesota: the Boreal Hardwood Transition region, which includes most of the Laurentian Mixed Forest Province; and the Prairie Hardwood Transition region, which includes much of the Eastern Broadleaf Forest Province. These broader regional declines may explain in part why Minnesota’s Warbling Vireo population is not following the increasing trend observed at the continental scale and is simply holding steady with no significant change (Figure 7). The decreases in the Boreal Hardwood and Prairie Hardwood forest regions appear to be offset by large, significant increases in the Prairie Pothole Region, which covers all of western Minnesota (Figure 8).

Factors responsible for these regional differences in population trends are poorly understood. In general, many woodlot species are experiencing increases in western Minnesota. Species that were considered absent from the intensively cultivated regions of the state are now found scattered throughout these areas, perhaps as shelterbelts mature and riparian buffers around lakes and streams are protected. Decreases in the forested region of the state may relate to increased development in east-central and southern Minnesota, as small, fragmented woodlots are replaced with more intensive land uses associated with agriculture and urbanization.

Range-wide, the vireo’s population increase is attributed to two primary factors. First, the species has shown an ability to adapt to human-modified landscapes and is frequently associated with low-density residential areas and city parks. Second, along the northern periphery of its breeding range, as mature coniferous forests were harvested and replaced by young, second-growth deciduous woodlands, the landscape became more suitable for this deciduous-loving vireo (Gardali and Ballard 2000). 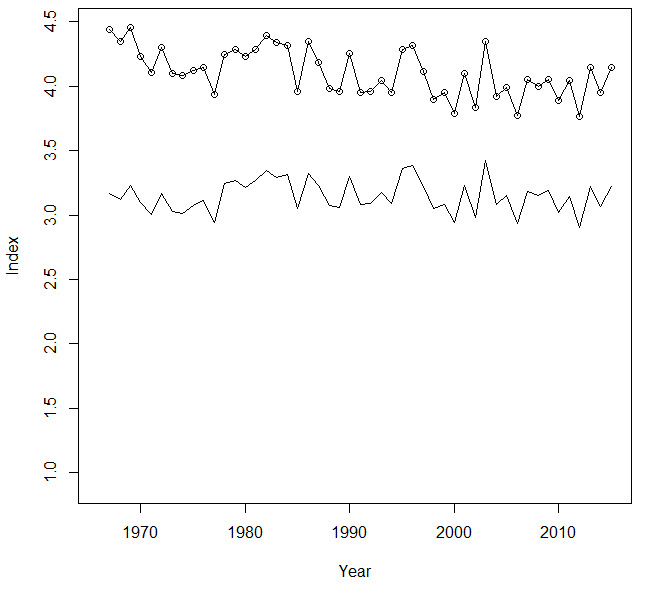 Breeding population trend for the Warbling Vireo in Minnesota for 1967–2015 based on the federal Breeding Bird Survey (Sauer et al. 2017).

Population trend map for the Warbling Vireo in North America for 1966–2015 based on the federal Breeding Bird Survey (Sauer et al. 2017).

With a large population dependent primarily on open, fragmented woodlands, the Warbling Vireo is not considered a conservation priority at either the federal or state level and has been assigned a moderately low Continental Concern Score of 8/20 (Rosenberg et al. 2016). Protection of riparian zones along wetlands, a management practice increasingly put into effect to improve water quality, should benefit this widely dispersed and relatively common species. Warming temperatures, a concern for many North American species, is predicted to have a minimal impact on Warbling Vireos, although more intensive study is warranted (North American Bird Conservation Initiative 2010). In the near term, the future of the little Warbling Vireo, nearly inconspicuous in its pale olive-green plumage as it flits among the treetop canopies, remains quite secure.