A regular breeding resident and migrant; regular during the winter months at scattered open water sites throughout eastern Minnesota. The American Black Duck was a rare species during the Minnesota Breeding Bird Atlas (MNBBA).

A game species, the American Black Duck is assigned a High Continental Priority by the North American Waterfowl Management Plan, and a Continental Concern Score of 11/20 by Partners in Flight; designated a Species in Greatest Conservation Need by the Minnesota Department of Natural Resources.

A short-distance or partial migrant. Populations in the eastern Great Lakes and New England are year-round residents; populations throughout much of eastern Canada and the western Great Lakes migrate to the southern United States.

A dabbler and upland grazer feeding primarily on aquatic plants and invertebrates; may graze on waste corn when it is available in the fall and winter. 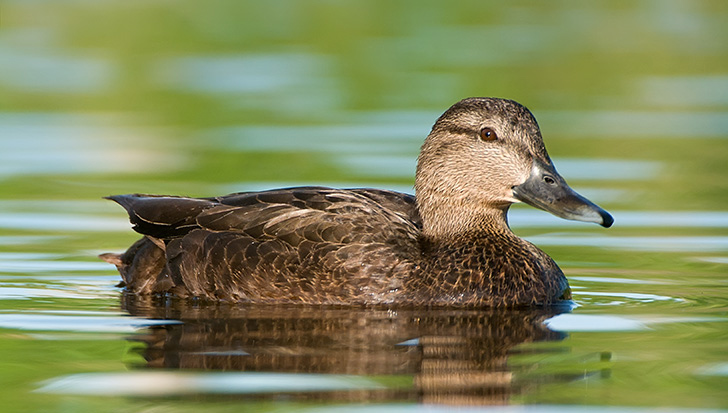 Breeding distribution and relative abundance of the American Black Duck in North America based on the federal Breeding Bird Survey from 2011 to 2015 (Sauer et al. 2017).

Minnesota lies on the western periphery of the American Black Duck’s breeding range. Indeed, before the early 1900s the species was not found breeding west of Lake Erie but has gradually expanded westward.

In the late 1800s and early 1900s, Roberts (1932) described it as a “straggler” in Minnesota. Scattered fall hunting reports submitted by a number of Roberts’s acquaintances from 1883 to 1910 described it as relatively rare among the hunters’ take. In 1885, it was considered rare or accidental in Otter Tail County and in the Mille Lacs region. In 1893, a market hunter near Heron Lake reported that he had never seen it there but he knew it was occasionally taken. From 1896 to 1910, only 14 were reported shot at the Long Meadow Gun Club south of Minneapolis.

Reports of birds observed during the summer became more common during the 1920s in the far northern regions of the state. Roberts mentions a letter he received in 1922 from Carlos Avery, the Minnesota game and fish commissioner from 1907 to 1921, commenting that his game wardens found the bird in “considerable numbers in the marshes and bogs between Red Lake and Rainy River” and that it appeared to be nesting in several areas. That same year Thaddeus Surber, then a biologist with the Minnesota State Game and Fish Department, wrote that he found several American Black Ducks on the Cascade River in Cook County and presumed from their behavior that nests or young were nearby. He also found several nesting pairs in northeastern Lake County and northwestern Cook County in 1926.

Green and Janssen (1975) later described the species’ primary breeding range as northeastern Minnesota, from Koochiching County south to northern Pine County. Beyond its primary breeding range, they identified confirmed nesting records from 8 widely dispersed counties: Clay, Freeborn, Kittson, Marshall, Pope, Ramsey, Washington, and Wilkin. Several years later Janssen (1987) delineated a larger breeding range, which spanned from eastern Roseau and Marshall Counties, south to Becker and Aitkin Counties, and east through the Arrowhead region. Since 1970, there were confirmed nesting records from 5 counties within this range: Aitkin, Becker, Cook, Lake, and Marshall. He noted, however, that there were summer season observations from scattered locations throughout southern and western Minnesota. In 1998, Hertzel and Janssen published a map of all counties where nesting had been confirmed since 1970. They added 8 to Janssen’s original list. Four of the counties were in northern Minnesota (Cass, Koochiching, Lake of the Woods, and St. Louis), and 4 were in east-central and southeastern Minnesota (Goodhue, Hennepin, Ramsey, and Washington).

The Minnesota Biological Survey (MBS) has reported 31 breeding season locations for the American Black Duck. All but 1 record (from Martin County) were restricted to northern counties, and the majority was reported from northern St. Louis and Lake Counties and from Cook County (Minnesota Department of Natural Resources 2016). The 2014 MBS published map does not depict the results of their fieldwork in the Northern Minnesota and Ontario Peatlands Section or in northwestern St. Louis County.

During the MNBBA, participants reported 73 American Black Duck records in 1.3% (62/4,733) of the surveyed atlas blocks and in 1.2% (27/2,337) of the priority blocks. Breeding evidence was found in only 12 surveyed blocks and was confined to east-central St. Louis County, northern Lake County, and Cook County (Figures 2 and 3; Table 1). Other than these 3 counties, Itasca was the only other county with more than 1 observation. The birds were reported from a total of 13 counties (1 block straddled 2 counties, Big Stone and Lac qui Parle). Breeding evidence has not been documented in southern Minnesota since 1978 (Wabasha County); in the Twin Cities metropolitan area the birds were last reported nesting in Hennepin County in 1976, in Ramsey County in 1977, and in Washington County in 1978 (Minnesota Ornithologists’ Union 2016). During the atlas, no birds were reported south of Carver County in the east or Lac qui Parle County in the west.

As the American Black Duck was expanding its range into northern Minnesota in the early to mid-1900s, it also was found in western Ontario, North Dakota, Manitoba, Saskatchewan, and Alberta. Birds were also introduced into Washington and British Columbia (Longcore et al. 2000). This westward expansion occurred at a time when populations were declining in the East due to a number of factors, including excessive hunting (Longcore et al. 2000).

To the east in Wisconsin, American Black Ducks were most abundant in the northern counties but were also confirmed breeding at scattered locations throughout the state during the first atlas conducted from 1995 to 2000 (Cutright et al. 2006). In Michigan, the number of townships where the species was reported declined 55% between the state’s first atlas (1983–1988) and second atlas (2002–2008). The largest decline was documented in the Lower Peninsula (Chartier et al. 2013). A similar decline was reported during the second atlas in Ontario (Cadman et al. 2007). 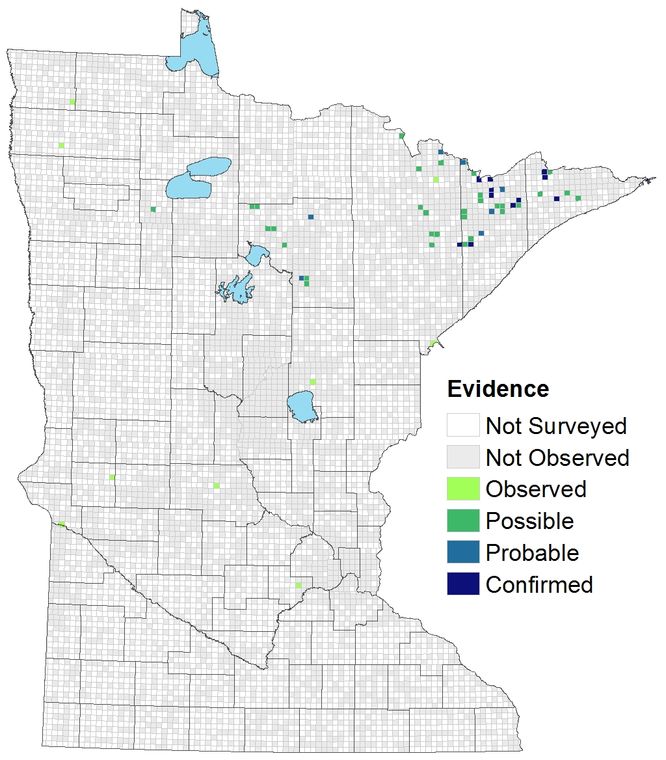 Breeding distribution of the American Black Duck in Minnesota based on the Breeding Bird Atlas (2009 – 2013).

Summary statistics of observations by breeding status category for the American Black Duck in Minnesota based on all blocks (each 5 km x 5 km) surveyed during the Breeding Bird Atlas (2009-2013).

Summary statistics for the American Black Duck observations by breeding status category for all blocks and priority blocks (each 5 km x 5 km) surveyed during the Minnesota Breeding Bird Atlas (2009-2013).

Other than choosing wetlands in forested landscapes, American Black Ducks do not appear to be partial to any particular habitats. Indeed, they are found during the breeding season in as widely divergent sites as coastal marshes, estuaries, shallow lakes, and boreal bogs (Longcore et al. 2000). Their general lack of specificity prompted one biologist to comment that the only singular requirement appeared to be the presence of water (Palmer 1976).

In Minnesota, and elsewhere in the Great Lakes region, the species is primarily dependent upon small forested wetlands. These may include small lakes with stands of emergent vegetation, small impoundments established by beaver dams, and small wetland openings in bogs and lowland hardwoods (Figure 4; Longcore et al. 2000). 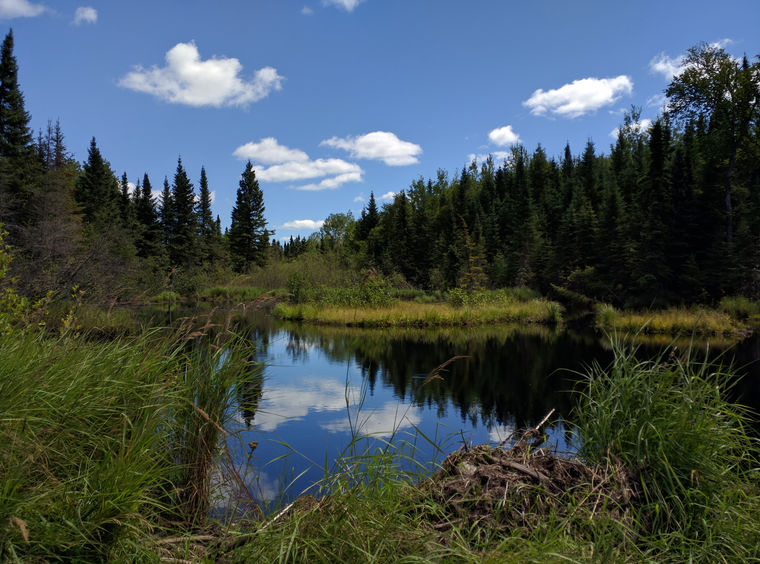 Because it is not a prairie pothole species, long-term population data on the American Black Duck breeding population have been fragmented until recently. The longest standing survey is the Mid-Winter Inventory, which began in 1955 and focuses on surveying waterfowl in major winter concentration areas. With the exception of a survey initiated in Ontario in 2002, these surveys are conducted only in the United States within each of the major flyways. In spite of its sampling limitations, the Mid-Winter Inventory is the only long-term source of data on American Black Duck populations (U.S. Fish and Wildlife Service 2016). Since 1955, the survey’s data show a dramatic 50% decline (Figure 5); although the rate of decline has slowed since the 1980s, the survey data show a continued downward trend. These long-term data are corroborated by data collected by the National Audubon Society’s annual Christmas Bird Count since the mid-1960s (Figure 6). Because a significant portion of the American Black Duck’s breeding range occurs north of the federal Breeding Bird Survey’s survey area, it is not a robust sampling tool for monitoring the species’ long-term trends.

In 1990, the continental Waterfowl Breeding and Habitat Survey, which previously limited its focus to the Prairie Pothole region, was expanded to include a large region of eastern Canada and New England (known as the Eastern Survey Area), and was then further expanded in 1998. The survey now covers much of the American Black Duck’s breeding range. As the number of years this survey is conducted increases, it will eventually replace the Mid-Winter Inventory as the more reliable monitoring tool. Since 1998, American Black Duck populations have been relatively stable in the Eastern Survey Area.

In 2015, the number of individuals within the core area of the Eastern Survey Area was estimated at 541,000 individuals (Zimpfer et al. 2015). This is below the population objective established by the North American Waterfowl Management Plan in 2004 of 640,000 birds (North American Waterfowl Management Plan 2004) and below the long-term average of 618,000 birds (1990-2014). Partners in Flight (2017) recently estimated the continental population as greater than 600,000 breeding adults.

The status of the American Black Duck in Minnesota is difficult to assess. The annual Waterfowl Breeding and Habitat Survey is conducted west of the primary range of the species in northeastern Minnesota, so trends are not effectively monitored.

Overall, biologists seem to agree that no single factor has been responsible for the range-wide decline of the American Black Duck. Overharvest, habitat loss and degradation, contaminants, and competition and hybridization with a growing Mallard population have all contributed to the loss of nearly 50% of the historical population (Baldassarre 2014). 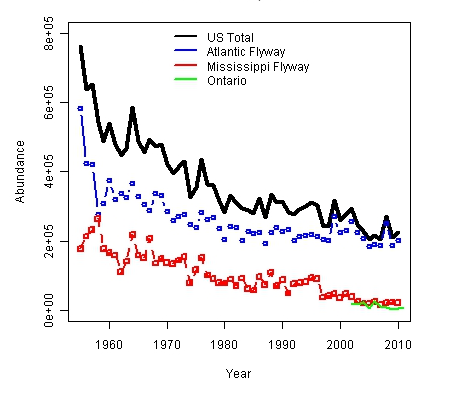 Population trend for the American Black Duck based on the Mid-Winter Inventory (Black Duck Joint Venture 2016). 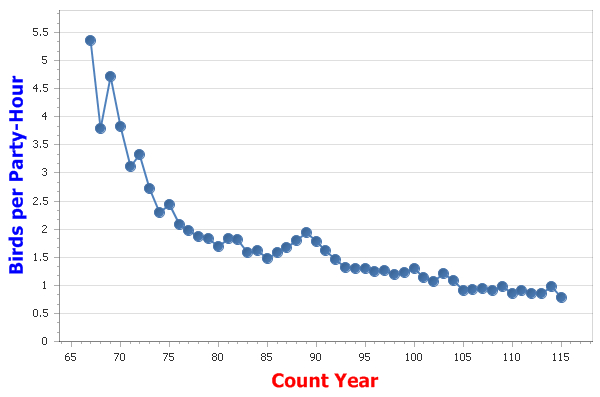 Given its significant population decline, the American Black Duck has been recognized by many resource agencies and conservation initiatives as a priority species. The North American Waterfowl Management Plan (North American Waterfowl Management Plan 2004) has designated it a species of High Continental Priority, and the U.S. Fish and Wildlife Service has identified it as a focal species (U.S. Fish and Wildlife Service 2011). It has been assigned a Continental Concern Score of 11/20 (Partners in Flight 2017). In 1989 the Black Duck Joint Venture was launched specifically to gather scientific data that would guide the conservation and restoration of the species. In Minnesota, the American Black Duck is designated a Species in Greatest Conservation Need because of its restricted distribution (Minnesota Department of Natural Resources 2015)

Revered as a game bird in the eastern United States and Canada, the contribution of high harvest levels to the bird’s demise was intensely debated for many years. In 1982, the Humane Society filed a lawsuit alleging that harvest regulations were too permissive. The outcome was the initiation of very restrictive regulations, after which the rate of the population decline abated (Longcore et al. 2000; Baldassarre 2014). In 2015, the annual harvest in the United States was 62,240 birds, or only 0.6% of the total number of all duck species harvested. That same year no American Black Ducks were reported harvested in Minnesota; in 2014 1,465 were harvested (Raftovich et al. 2016).

Contaminants, habitat loss, and habitat degradation are other factors that have likely impacted American Black Duck populations. For example, marshes in the Chesapeake Bay region historically provided important breeding habitat, but the size of the local population has declined significantly due to habitat degradation (Baldassarre 2014). Climate change may also be a factor now and in the future. “The State of the Birds 2010 Report on Climate Change” classified the American Black Duck as having medium vulnerability to climate change, and a recent assessment by the National Audubon Society predicted a loss of 63% of the species’ current breeding range by the year 2080 (Langham et al. 2015; National Audubon Society 2016b). As a result of the latter analysis, National Audubon classified the species as “climate endangered.”

Biologists seem to agree that perhaps the biggest long-term threat to the species is the increasing population of Mallards, which outcompete and hybridize with the American Black Duck (Baldassarre 2014). Indeed, hybridization with Mallards was considered by one author to be the primary cause for the decline of the American Black Duck in Ontario (Ankney et al. 1987). Although the debate within the scientific community continues about the relative importance of these factors and whether the Black Duck and Mallard are indeed separate species, the future of the American Black Duck seems tenuous at best.