A regular breeding resident and migrant but very sparsely distributed throughout the state; regular in winter at several sites, including the Lower Mississippi River. The American Wigeon was a rare species during the Minnesota Breeding Bird Atlas (MNBBA).

The American Wigeon’s primary breeding range extends from Alaska south through Canada’s Prairie Provinces and the U.S. Prairie Pothole Region. Smaller numbers are found east through the northern Great Lakes and along the St. Lawrence River valley. Highest breeding densities are largely restricted to the tundra and boreal forest regions of Alaska and western Canada, and to the prairie potholes of North Dakota. Figure 1 illustrates the wigeon’s relative abundance within that portion of its breeding range sampled by the federal Breeding Bird Survey (BBS).

A game species, the American Wigeon is assigned a Moderately High Continental Priority by the North American Waterfowl Management Plan, and a Continental Concern Score of 10/20 by Partners in Flight.

A short- to medium-distance migrant that winters along the west coast from Alaska south to Baja California, and in the southern United States and Central America. 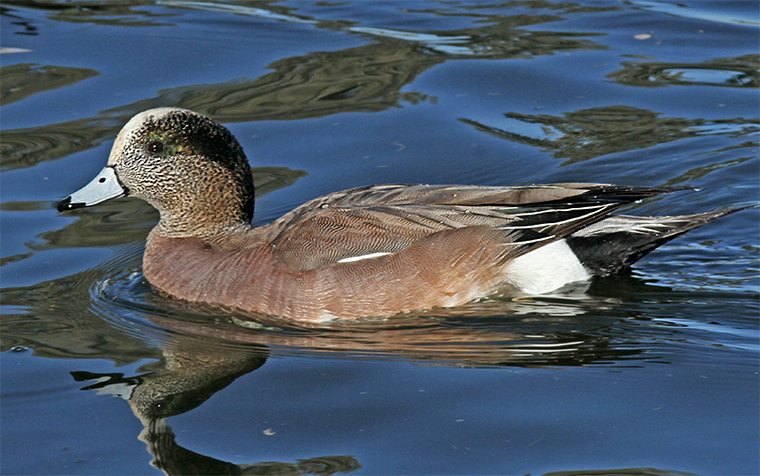 Breeding distribution and relative abundance of the American Wigeon in North America based on the federal Breeding Bird Survey from 2011 to 2015 (Sauer et al. 2017).

Minnesota is primarily a thoroughfare for American Wigeons traveling to and from the core of their breeding range in Canada’s boreal regions. Indeed, when Roberts wrote his treatise on the birds of Minnesota in 1932, there were no confirmed nesting records for the American Wigeon in the state. Nevertheless, the occasional occurrence of pairs in late spring and early summer led him to speculate that it might be a rare summer resident. Most observations were in southwestern and west-central Minnesota, including a pair at Heron Lake in Jackson County in 1898, 2 pairs at Lake Benton in Lincoln County in 1928, and 2 pairs seen in Grant County in 1929.

Even though these early records of potential nesting pairs were in western Minnesota, future field observations would confirm that the American Wigeon is more of a northern species than a species of the western prairie potholes. Green and Janssen (1975) noted that despite scattered breeding records in southern Minnesota, the species was primarily a summer resident in north-central Minnesota and adjacent counties. It was most common in Itasca and Beltrami Counties. South and west of this primary breeding range there were 9 confirmed nesting reports, from Becker, Grant, Lake, Le Sueur, Lincoln, Mahnomen, Otter Tail, Sibley, and Stearns Counties.

Janssen (1987) included a similar distribution map, which delineated the north-central region of the state, from eastern Kittson and Marshall Counties east to northern St. Louis County, and south to northern Cass and northern Aitkin Counties, as the primary breeding range. He identified 11 counties where nesting had been confirmed since 1970. Eight of the counties (Aitkin, Beltrami, Cass, Itasca, Lake of the Woods, Marshall, Polk, and St. Louis) were located within the core of the species’ breeding distribution; 3 counties were located farther south (Lac qui Parle, Stearns, and Todd). When Hertzel and Janssen (1998) published an updated account of counties where nesting had been confirmed since 1970, only one county, Grant, was added to the list.

By 2014, the Minnesota Biological Survey had recorded 27 breeding season locations of the American Wigeon. The majority of locations (17) were in the Prairie Parkland and Tallgrass Aspen Parklands Provinces of western Minnesota; 8 were located in the Laurentian Mixed Forest Province, and 2 were within the Eastern Broadleaf Forest Province. Koochiching and Lake of the Woods Counties and portions of Beltrami and St. Louis Counties, regions where the species does occur, had yet to be surveyed (Minnesota Department of Natural Resources 2016).

MNBBA participants reported 55 American Wigeon records from 1.0% (48/4,734) of the surveyed atlas blocks and from 0.9% (21/2,337) of the priority blocks. Breeding was confirmed in only 3 blocks (Figures 2 and 3; Table 1). The birds were reported from 22 of Minnesota’s 87 counties (1 record straddled Cass and Morrison Counties), and breeding was confirmed in 2 counties: Lac qui Parle and Marshall. More than half of the records were located in the Laurentian Mixed Forest Province, followed by the Tallgrass Aspen Parklands Province. Scattered records, including 1 breeding record in Lac qui Parle County, were reported in southern Minnesota.

Because of its sparse distribution in the state, it is difficult to know if the species’ distribution has changed over the past 100 years or if it was simply overlooked amid the smaller wetlands of Minnesota’s northern forests. The absence of breeding records in the late 1800s and early 1900s compared with the relative prominence of records in north-central Minnesota beginning in the mid-1900s may reflect a change in the species’ distribution that is similar to that observed across North America. Gradually wigeons have decreased in abundance in the prairie potholes of the United States and Canada, while their numbers have increased significantly in Alaska and their range has expanded east across the northern Great Lakes region and the Maritime Provinces (Mini et al. 2014). Factors responsible for these changes may be related to the loss of suitable habitat in the prairie potholes coupled with the creation of more suitable habitat in other regions, especially the creation of more impoundments specifically managed for waterfowl populations (Mini et al. 2014). 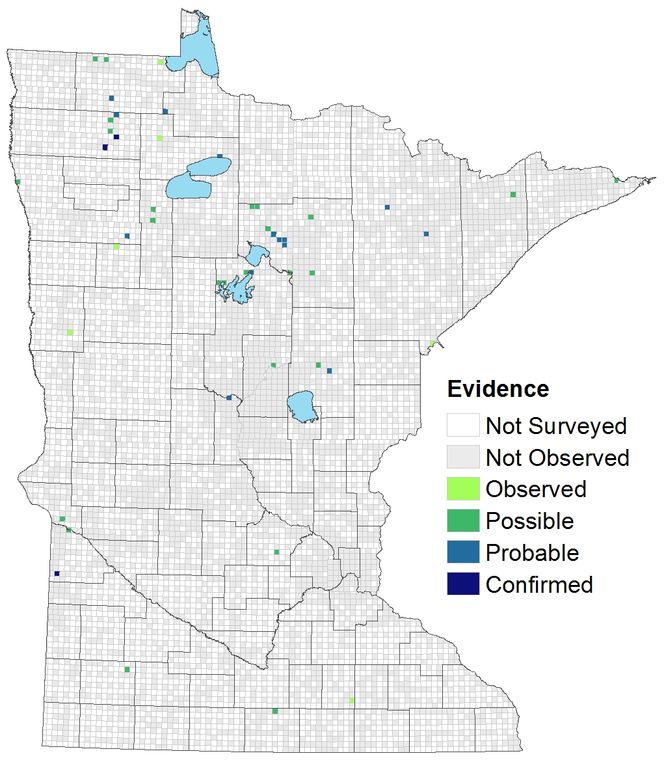 Breeding distribution of the American Wigeon in Minnesota based on the Breeding Bird Atlas (2009 – 2013).

Summary statistics of observations by breeding status category for the American Wigeon in Minnesota based on all blocks (each 5 km x 5 km) surveyed during the Breeding Bird Atlas (2009-2013).

Summary statistics for the American Wigeon observations by breeding status category for all blocks and priority blocks (each 5 km x 5 km) surveyed during the Minnesota Breeding Bird Atlas (2009-2013).

Throughout its range, the American Wigeon is found in shallow wetlands adjacent to upland grass and brushy vegetation (Mini et al. 2014; Baldassarre 2014; Figure 4). Such features are common throughout the prairie potholes of the United States and Canada, Canada’s northern boreal forests and parklands, and Alaska’s coastal tundra.

With such a wide and diverse distribution, it is not uncommon to find American Wigeons using a broad and diverse range of habitats. In central Saskatchewan, for example, wetlands averaged less than 1.2 ha and were surrounded by a variety of grasslands and low shrubs. In the prairie potholes of South Dakota, the birds frequently selected constructed wetlands, such as stock ponds and reservoirs. In the Yukon, broad, expansive river deltas bordered by low, shrubby tundra vegetation are frequented by the birds (Mini et al. 2014). Regardless of location, the availability of dense upland cover seems paramount. Wetland conditions also are important. If drought conditions prevail in the southern prairie potholes and parklands, wigeons bypass these areas and fly farther north to breed in Alaska and northwestern Yukon (Baldassarre 2014). 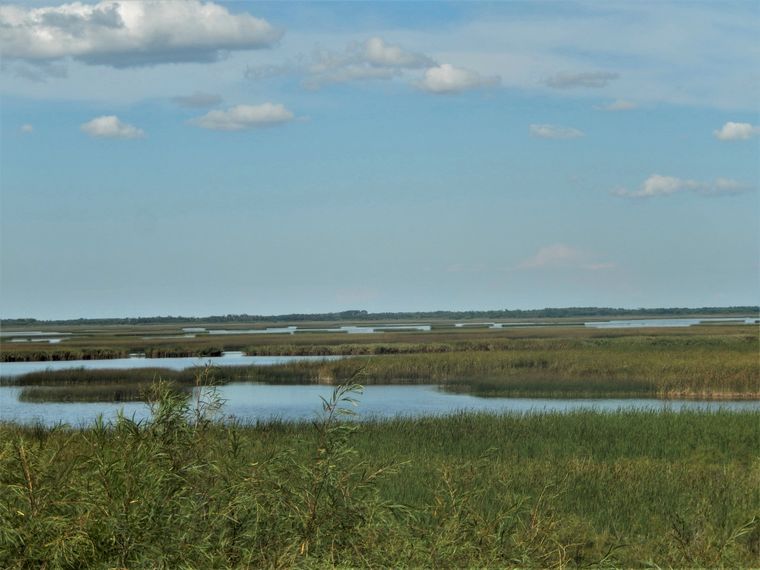 Typical breeding habitat of the American Wigeon in Minnesota (© Lee A. Pfannmuller)

As for all waterfowl, population numbers are closely monitored by the Waterfowl Breeding and Habitat Survey, a coordinated effort of the U.S. Fish and Wildlife Service and the Canadian Wildlife Service. The survey is conducted in two very large areas: the Prairie Pothole Region of the United States and Canada (known as the “Traditional Survey Area”) and the eastern Canadian provinces and the state of Maine (known as the “Eastern Survey Area”). Minnesota is not included in either area. Although small numbers of wigeons occur in the Eastern Survey Area (an annual average of 18,005 per year from 1990 to 2010), the Traditional Survey Area covers a large percentage of the wigeon’s distribution in western Canada and Alaska (Baldassarre 2014).

Although overall population numbers have been relatively stable since monitoring began in 1955 (Figure 5), there have been significant regional shifts that are masked by the overall trend and that oscillate from year to year. For example, from 1955 to the late 1990s, the number of American Wigeons in Alaska grew from a low of 100,000 birds to over 1 million birds. At the same time, the number of wigeons in the Prairie Pothole Region from 1997 to 2006 averaged 60% lower than numbers reported during the 1970s (Mini et al. 2014). More recently, however, the number of birds in Alaska decreased to 541,000 in 2015, while very large increases were observed in Montana and the Dakotas (Zimpfer et al. 2015). Some of these changes are, no doubt, a reflection of annual changes in wetland conditions. The long-term increase in numbers of wigeons in Alaska, however, may be due to higher rates of adult survival during the breeding season or on the Pacific Coast wintering grounds, coupled with less suitable, long-term conditions in the Great Plains potholes (Mini et al. 2014).

Another source of long-term monitoring data for the American Wigeon is the federal Breeding Bird Survey (BBS). These data illustrate a statistically significant, long-term population decline of 2.13% per year since the survey began in 1966 (Sauer et al. 2017). In recent years, however, the population has stabilized, with an average annual decline of only 0.20% from 2005 to 2015 (Figure 6). A rare species in Minnesota, American Wigeons are not detected on BBS routes in the state, so statewide trend data are not available.

The BBS is a reasonably accurate depiction of population numbers in the southern half of the wigeon’s North American breeding range and is likely an accurate reflection of the species’ decline in the northern Great Plains and the Canadian Prairie provinces. However, BBS routes are sparsely distributed in Alaska and the northern reaches of Canada, where significant breeding concentrations of American Wigeons now occur, so it is unlikely that the species’ true status across its entire breeding range is adequately represented by BBS data.

Minnesota is located on the southern periphery of the American Wigeon’s range. Thus, the population trend in Minnesota, depicted by the annual Minnesota Waterfowl Survey, demonstrates wide fluctuations. Since 1997, numbers have ranged from a low of 56 birds in 1999, to a high of 4,634 in 2004. Unfortunately, the state’s aerial survey is not statewide in coverage, and most of the breeding season observations submitted by birders, as well as atlas observers, occur north of the strata surveyed by Minnesota’s annual Waterfowl Survey (Cordts 2015). Minnesota also represents the southern periphery of the wigeon’s North American breeding range, so wide population fluctuations from year to year would be expected. 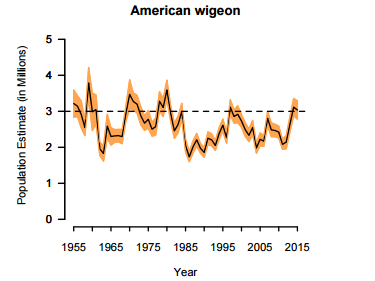 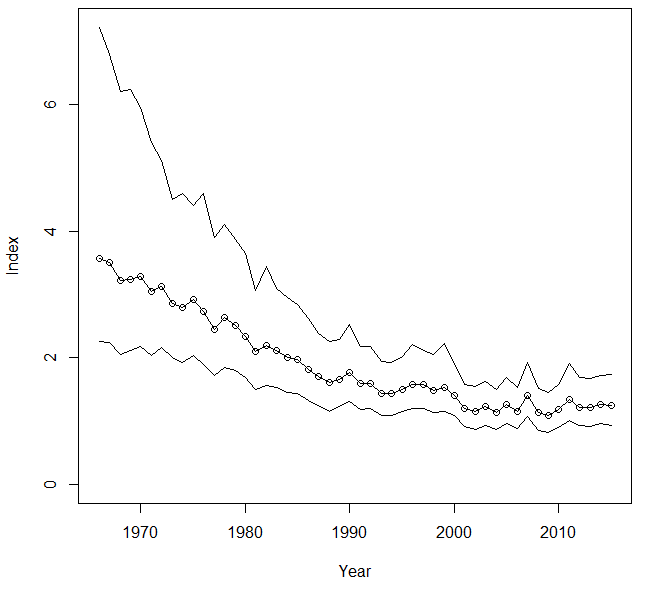 Breeding population trend for the American Wigeon in North America for 1966–2015 based on the federal Breeding Bird Survey (Sauer et al. 2017).

The North American Waterfowl Management Plan (2004) has ranked the American Wigeon a species of Moderately High Concern, and recently the North American Bird Conservation Initiative identified it as a Common Bird in Steep Decline (North American Bird Conservation Initiative 2014). Its high sensitivity to changing climatic conditions in the prairie potholes and prairie parklands is a major concern. It was assigned a moderate Continental Concern Score of 10/20 by Partners in Flight (2017).

American Wigeons represented approximately 5.4% of the total duck harvest in the United States in 2015, with a total of 592,721 birds harvested (Raftovich et al. 2016); only 8,927 birds were taken in Minnesota. The largest number of birds is harvested in the Pacific flyway, which accounted for 66% of the total harvest in 2015.

Conservation concerns for the American Wigeon during the breeding season focus largely on the bird’s status in the Prairie Pothole Region of the United States and in the prairie parklands of southern Canada, where populations have shown the greatest fluctuations. Indeed, American wigeons respond more negatively to drought conditions in this region than many other waterfowl species. Continued focus on wetland protection and restoration efforts is critical for all wetland-dependent species in this region, including in Minnesota.

Compounding the challenges are the long-term impacts of climate change. With predicted losses of two-thirds of the Prairie Pothole wetlands, an entire suite of wetland species could be lost. A recent analysis of the impacts of climate change on 588 North American birds included a prediction that only 35% of the wigeon’s current breeding range will remain by the year 2080 and that suitable habitat will make a dramatic shift northward to northern Alaska, the Northwest Territories, the Nunavut Territory, and northern Quebec. In lieu of the analysis, the wigeon was classified as a “climate endangered” species ( Langham et al. 2015; National Audubon Society 2016).