A regular breeding species and migrant; a winter vagrant, with one or a few birds occasionally seen in the early winter months. The Baltimore Oriole was a common species during the Minnesota Breeding Bird Atlas (MNBBA).

Distributed across southern Canada, from Alberta east to the southern Maritime Provinces, and throughout the eastern United States, from the northern Great Plains and Central Plains eastward. The Baltimore Oriole reaches its highest breeding densities in the Central Mixed Grass Prairie Region of southern Nebraska and central Kansas (Figure 1).

Assigned a Continental Concern Score of 10/20 and designated a Minnesota Stewardship Species by Audubon Minnesota.

A medium- to long-distance migrant; most birds spend the winter months in Central America or northern South America.

Primarily a foliage gleaner feeding on a variety of terrestrial insects; also consumes some fruit and nectar. A popular bird at backyard feeders, orioles also will feed from oranges and hummingbird feeders. 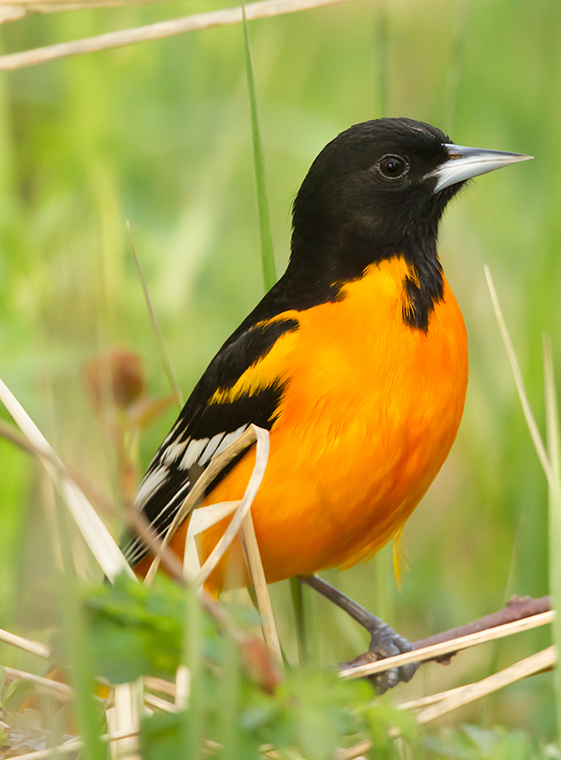 Breeding distribution and relative abundance of the Baltimore Oriole in North America based on the federal Breeding Bird Survey from 2011 to 2015 (Sauer et al. 2017).

In the early 1900s, Roberts (1932) noted that the well-loved Baltimore Oriole, also known as the “Golden Robin,” was a common summer resident across the state. Not only did it occur throughout the deciduous forest region of southeastern and central Minnesota, it also could be found in the scattered woodland groves throughout the eastern prairie and agricultural region. As was observed elsewhere throughout the Great Lakes and southern Canada, it was becoming more common in Minnesota’s northern counties as the mixed forests were cleared and replaced by extensive stands of aspen and birch. Confirmed nesting records (nests with eggs or young) were documented from 7 counties: Hennepin, Isanti, Kittson, Otter Tail, Polk, Waseca, and Wright as well as from Itasca State Park. Inferred nesting records (nests) were available from Goodhue and Morrison Counties.

Indeed, little has changed since Roberts’ time. Green and Janssen (1975) noted that this oriole was scarce in the far northeastern counties of Cook and Lake but widely distributed throughout the rest of the state. A few years later Janssen (1987) delineated a total of 45 counties where the species had been confirmed nesting since 1970; by 1998 nesting was confirmed in an additional ten counties (Hertzel and Janssen 1998). At the time, the largest region where nesting had not been confirmed stretched from Chisago County north to Cook County and west to Koochiching County. Likewise, field surveys by the Minnesota Biological Survey also documented the species’ widespread distribution in all but extreme northern counties and in the most intensively cultivated regions in western Minnesota (Minnesota Department of Natural Resources 2016).

During the MNBBA, participants tallied a total of 3,423 Baltimore Oriole records in nearly 43.2% (2,064/4,773) of all the atlas blocks surveyed and in 58.3% of the priority blocks (1,363/2,337). Breeding evidence was documented in 483 blocks (Figures 2 and 3; Table 1). Orioles were reported in every county except Cook, and they were reported from only one block in Lake County. Breeding was confirmed in 75 of the state’s 87 counties; Brown County was included because numerous blocks along the Minnesota River with confirmed breeding straddled both Nicollet and Brown Counties. Twenty-six counties were additions to those delineated by Hertzel and Janssen (1998). Even in intensively cultivated regions of western Minnesota, riparian woodlands, scattered woodlots, and shelterbelts are widely used by the species. The extensively forested landscape of northeastern and far north‑central Minnesota remains the only area where the species is scarce.

Indeed, as more shelter belts were planted in the Great Plains region, Baltimore Orioles slowly expanded westward. They also expanded north as forests were cleared in the northern Great Lakes states and southern Canada (Rising and Flood 1998; Cadman et al. 2007). In Ontario, however, forest cover increased and open habitats decreased in the province’s southern region since its first atlas (1981-1985) was completed. The result was a decline in the distribution and abundance of Baltimore Orioles when the province’s second atlas (2001-2005) was conducted (Cadman et al. 2007). Elsewhere there have been few recent changes to the species distribution other than local changes due to habitat alterations.

In Minnesota, MNBBA data were used to predict the probability of observing Baltimore Orioles throughout the state (Figure 4). Moderate breeding densities are predicted throughout all but the more northern and eastern regions of the  Laurentian Mixed Forest Province. Scattered areas of higher abundance occur throughout the Eastern Broadleaf Forest Province, especially along the lower Mississippi River and in the Harwood Hills Subsection of west-central Minnesota. Several riparian corridors in the Prairie Parklands Province also support higher breeding densities. Although the species gradually declines in abundance across the northern forest landscape, pockets of higher abundance are still found, including along the Iron Range of central St. Louis County and southern Itasca County and in northern St. Louis County. 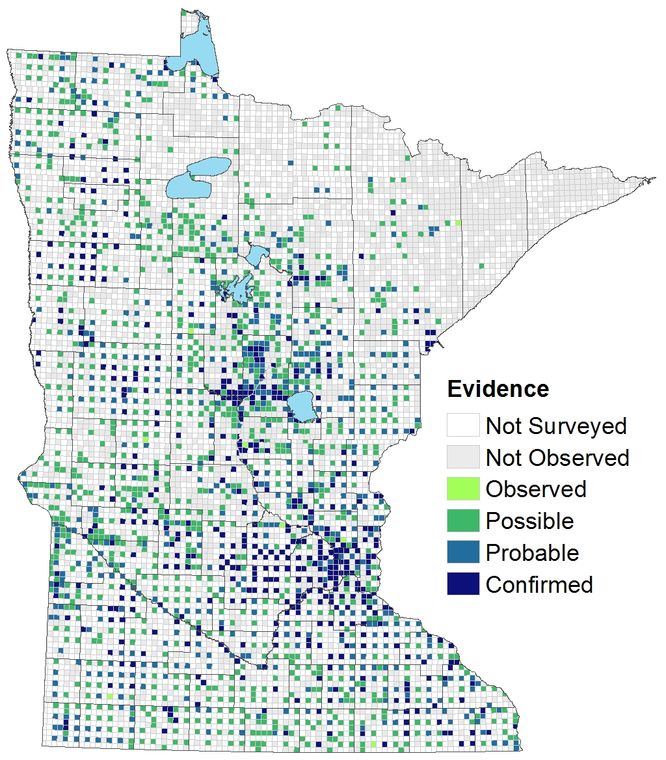 Breeding distribution of the Baltimore Oriole in Minnesota based on the Breeding Bird Atlas (2009 – 2013).

Summary statistics of observations by breeding status category for the Baltimore Oriole in Minnesota based on all blocks (each 5 km x 5 km) surveyed during the Breeding Bird Atlas (2009-2013).

Summary statistics for the Baltimore Oriole observations by breeding status category for all blocks and priority blocks (each 5 km x 5 km) surveyed during the Minnesota Breeding Bird Atlas (2009-2013). 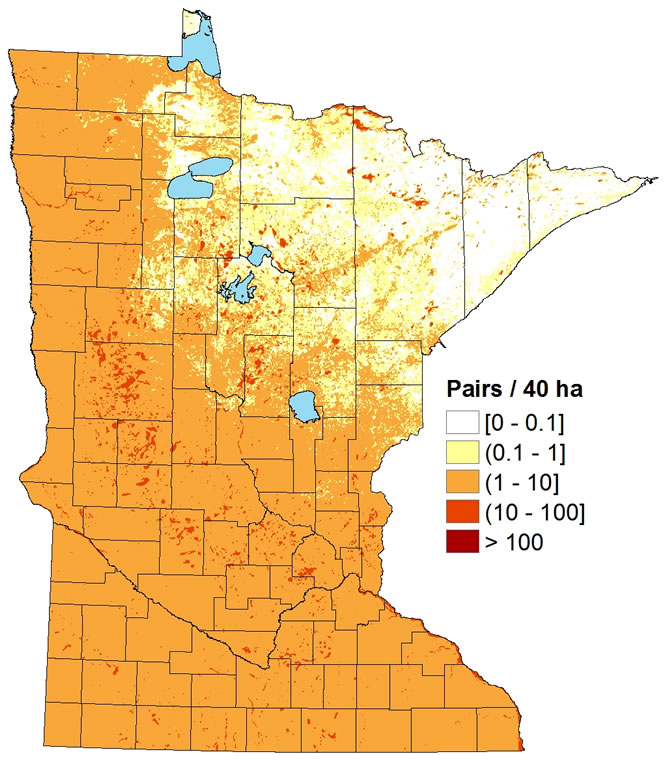 Predicted breeding distribution (pairs per 40 hectares) of the Baltimore Oriole in Minnesota based on habitat, landscape context, and climate data gathered during the Minnesota Breeding Bird Atlas (2009-2013) using the General Linear Modeling method with an adjustment for detectability.

The Baltimore Oriole inhabits a wide variety of open woodlands, including riparian corridors along streams and lakes, shelterbelts, forest edges, city parks, and residential areas (Figure 5). The only habitat they avoid is extensively forested landscapes. In northern Wisconsin and Minnesota, orioles were most likely to be found in small towns and cities rather than in managed forest stands (Niemi et al. 2016). Although they will use mixed woodlands, deciduous woods and trees are preferred.

Data collected from the MNBBA point counts were used to further delineate the oriole’s habitat preferences across the state (Figure 6). Within 200 m of point counts where orioles were detected, the dominant habitats were oak forests, upland grasslands, and pine-oak barrens. 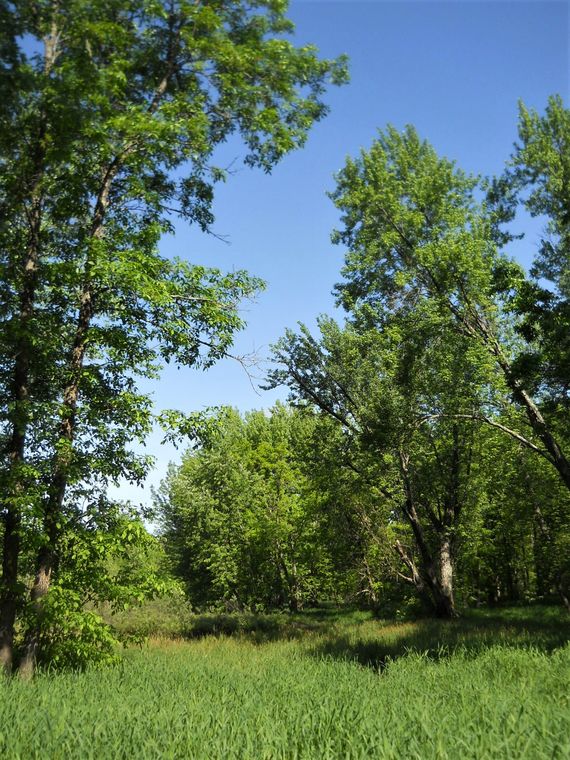 Habitat profile for the Baltimore Oriole based on habitats within 200 m of point counts where the species was present during the Minnesota Breeding Bird Atlas (2009-2013).

Using data from the federal Breeding Bird Survey (BBS), biologists have estimated the global breeding population of the Baltimore Oriole to be 12 million breeding birds, 9.7 million of which occur in the United States (Rosenberg et al. 2016). The statewide estimate for Minnesota is 620,000 individuals, or 5.2% of the global population (Partners in Flight Science Committee 2013). The MNBBA generated a  significantly higher estimate of 3.2 million breeding individuals (95% confidence interval of 2.5 – 4.4 million). Regardless of the estimate, Minnesota supports a relatively large percentage of the species’ population (at least 5% of its population and 8% of its breeding range), which prompted its designation as a Stewardship Species by Audubon Minnesota (Pfannmuller 2012).

Although Minnesota supports large numbers of Baltimore Orioles, the core of the species’ breeding range, where the highest breeding densities are observed, is further south in the Central Plains states of Nebraska and Kansas (Figure 1). An average of 8 to 12 Baltimore Orioles are observed on BBS routes in these two states, compared with an average of approximately 4 per route in Minnesota (Sauer et al. 2017).

Given the oriole’s preference for open woodlands, residential areas, and city parks, estimates of population densities in Minnesota’s northern forest region were relatively low, ranging from a mean of 0.03 pairs per 40 ha on the Superior National Forest and 0.06 pairs per 40 ha on the Chippewa National Forest (Niemi et al. 2016). Density estimates are likely much higher within the Eastern Mixed Forest region of Minnesota, where populations reach their highest abundance (Figures 2 and 4).  Estimates from other states range from a low of 1.5 – 4 pairs per 40 ha in Oklahoma to a high of 19 pairs per 40 ha in Vermont (Rising and Flood 1998). The availability of suitable nest trees and abundant insect populations, such as forest tent caterpillars, can significantly influence local abundance and breeding densities (James and Neal 1986; Sealy 1980).

Since long-term monitoring began in 1966, the Baltimore Oriole has demonstrated a statistically significant but slow, long-term population decline at a rate of 1.49% per year in North America. This rate has slowed during the most recent ten-year reporting period (2005–2015) to 1.06% per year (Sauer et al. 2017).  During the same period the population in Minnesota has remained relatively stable (Figure 7).

Factors responsible for the large-scale population decline are not well known. However, orioles are susceptible to pesticides, both directly and indirectly, which are applied to shade trees to prevent or control infestations by gypsy moths or the spread of Dutch Elm disease (Rising and Flood 1998). 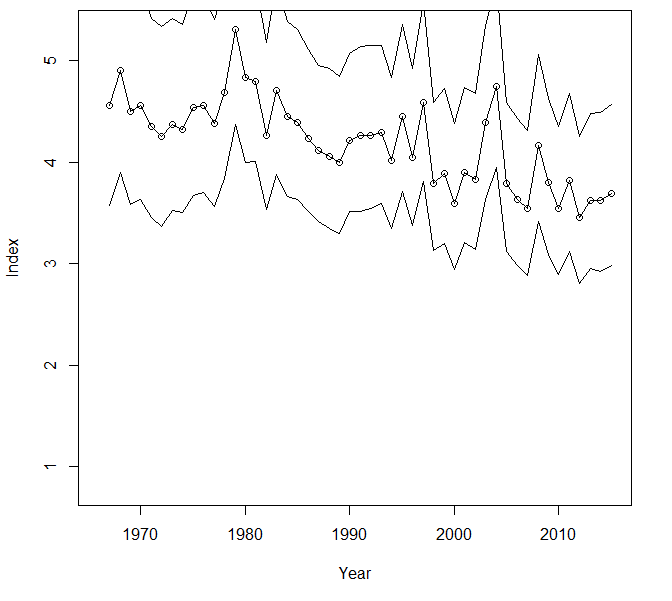 Breeding population trend for the Baltimore Oriole in Minnesota from 1967-2015 based on the federal Breeding Bird Survey (Sauer et al. 2017).

Although it has a declining population, the species’ adaptability to a wide variety of habitats, including residential areas, shelterbelts, and parklands, has eased any short-term conservation concern for the species. It has been assigned a Continental Concern Score of 10/20 (Rosenberg et al. 2016); aside from the declining population, most threats to the species are considered minimal.

In years past there was concern that the spread of Dutch Elm disease would have a significant impact on overall population numbers, but the species has readily accepted other large hardwood trees as suitable nest sites, including oaks, maples, and cottonwoods. Preservation of large trees in urban and rural areas, however, is an important measure for protecting nesting habitat, coupled with reduced pesticide use. Even climate change may not pose the same threat to Baltimore Orioles as it is projected to pose to many other North American songbirds. An intensive modeling exercise by the National Audubon Society (2016) predicted that by the year 2080 warming temperatures might actually increase the amount of breeding habitat available to Baltimore Orioles by 76% (Langham et al. 2015; National Audubon Society 2016).

In the short term, there is more concern for the status of the species’ winter habitat in Central and South America than for its breeding habitat. Commonly associated with shade-grown coffee plantations, the trend to eliminate shade trees from many plantations could significantly impact wintering birds (Bock et al. 1993).