A regular breeding resident and migrant in southern Minnesota; the Bell’s Vireo was a rare species during the Minnesota Breeding Bird Atlas (MNBBA).

The species’ breeding range stretches from northern Mexico, across southern Texas, Arizona, and New Mexico, and north through the lower Mississippi River valley and its tributaries. In the United States, the Bell’s Vireo reaches its highest breeding densities in southern Texas and southern Arizona (Figure 1).

Assigned a Continental Concern Score of 11/20 by Partners in Flight; officially classified as a Special Concern Species in Minnesota and designated a Species in Greatest Conservation Need by the Minnesota Department of Natural Resources. One subspecies, which occurs in southern California and northern Baja California, the Least Bell’s Vireo (Vireo bellii pusillus), is federally endangered.

A medium-distance Neotropical migrant that winters in Central America.

A foliage-gleaning insectivore that feeds on a variety of arthropods, especially spiders and caterpillars.

A hanging cup whose rim is secured into the fork of a horizontal branch of a small tree or shrub. 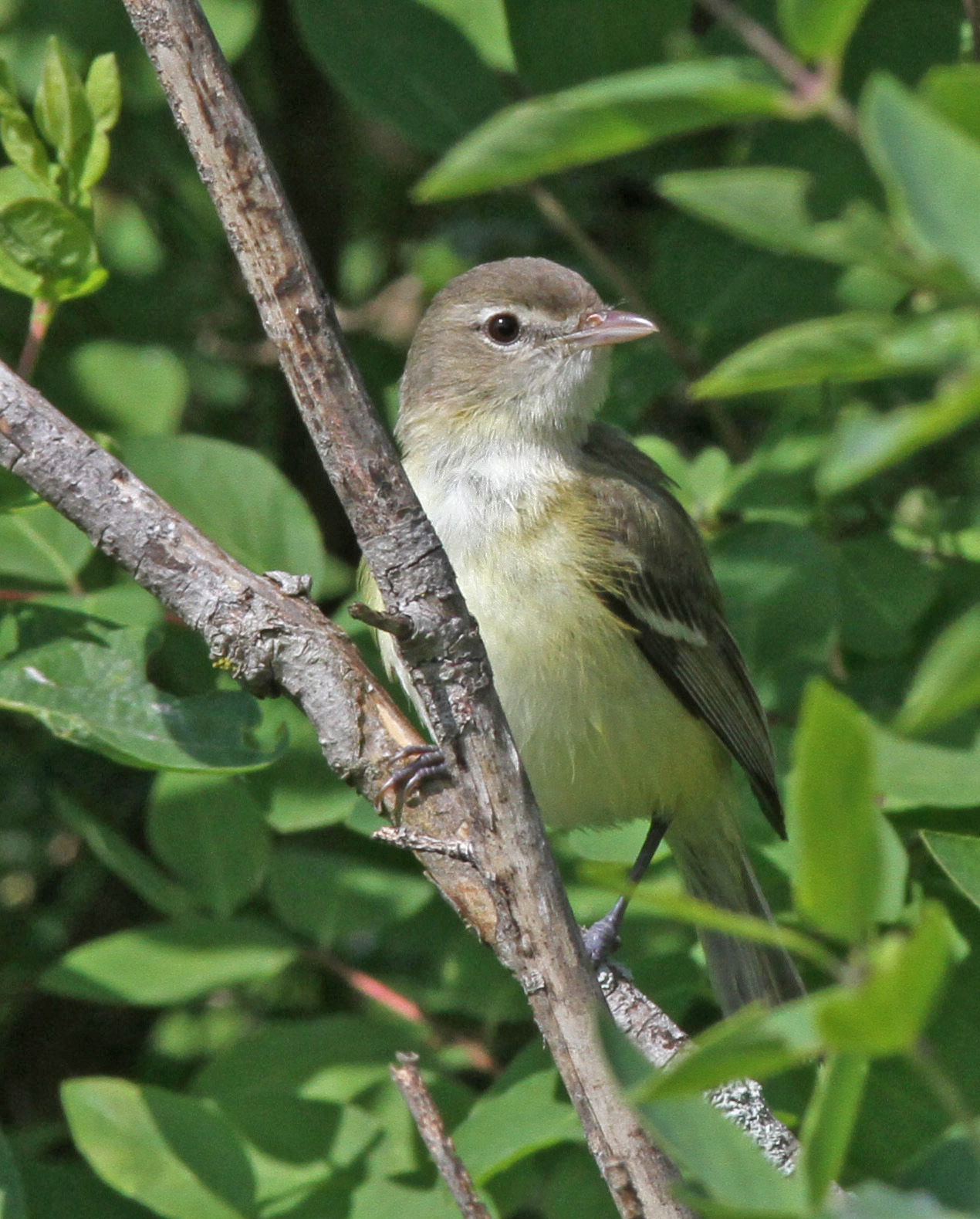 Breeding distribution and relative abundance of the Bell’s Vireo in North America based on the federal Breeding Bird Survey, 2011–2015 (Sauer et al. 2017).

The author’s long acquaintance with Dr. Hatch leads him to believe that this is one of several misconceptions that found their way into his writings, for no capable observer in the years that preceded the publication of the book or in the many years that have elapsed since has found anything to substantiate the statement. Extensive and careful search has several times been made through the southern part of the state without results.

Roberts could account for only 2 positive records of the species. The first was a nesting pair that he and his colleague Mr. Kilgore found in May 1922 “in a dense poplar thicket on the west side of the Fort Snelling Reservation.” The second was a well-documented sighting in Winona in August 1930 by a keen observer, Mrs. Bailey.

More than 20 years passed before a rather remarkable account of 6 nesting pairs in Winona County was documented by Brother Theodore in 1952 (Theodore 1952). All nesting pairs were found in the general vicinity of St. Mary’s College and the city of Winona. In the following years, records continued to accumulate, including another nesting record in Houston County in 1961 (Huber 1961). When Green and Janssen summarized the status of the species in 1975, they described its distribution as restricted to the Mississippi River corridor, from the Twin Cities south to the Iowa border. Their account also included an interesting summer record of a singing male in Rock County.

Several years later, when Janssen (1987) provided an update on the species, nesting had been confirmed in 2 additional counties, Ramsey and Olmsted. There also were new summer reports from the southwest corner of the state (Pipestone County) as well as from several southeastern counties.

In 1998, Hertzel and Janssen published an updated map delineating 6 counties where nesting had been confirmed since 1970: Blue Earth, Dakota, Olmsted, Ramsey, Wabasha, and Winona.

During the MNBBA, participants reported 32 Bell’s Vireo records from 0.5% (25/4,734) of the surveyed atlas blocks and from 0.5% (11/2,337) of the priority blocks. Breeding was confirmed in only 4 blocks (Figures 2 and 3; Table 1). The birds were observed in 15 of Minnesota’s 87 counties and were confirmed breeding in 3 counties: Dakota, Hennepin, and Rice (1 block straddled Hennepin and Dakota Counties). Most observations were within the greater Twin Cities metropolitan area, in Hennepin, Ramsey, Washington, and Dakota Counties. Records were also documented as far west as Kandiyohi and Watonwan Counties, and as far north as Sherburne and Chisago Counties (Figure 2).

The vireo’s range expansion in Minnesota is represented by a series of maps that depict the cumulative number of counties where they were reported during the summer seasons during three time periods: (1) in the 1960s, (2) from the 1960s through the 1980s, and (3) finally from the 1960s through the last year of the MNBBA, in 2013. As Figure 4 illustrates, over a period of 50 years Bell’s Vireo expanded its range to the north (as far as Chisago County) and to the west.

The species’ northward expansion appears to have occurred along two fronts. The primary one was along the Mississippi River valley into southeastern and east-central Minnesota. From there, the species expanded west to south-central Minnesota, including along the lower Minnesota River valley. The second front appears to have been northward from northwestern Iowa or southeastern South Dakota, likely along some of the smaller river valleys of the Prairie Coteau region.

Elsewhere, Bell’s Vireo also appears to have followed river corridors to expand along the northern periphery of its breeding range. The shrubby vegetation that dominates many floodplains provides ideal habitat for the species. Wisconsin documented its first Bell’s Vireo record in 1914 in south-central Wisconsin; today the species occurs as far north as the town of Prescott in Pierce County at the mouth of the St. Croix River as well as at sites along the floodplains of the Mississippi and Wisconsin rivers (Cutright et al. 2006). The first nesting in southern Ohio occurred in 1968; the state’s second atlas, conducted from 2006 to 2011, documented 20 records spread across the western half of the state (Rodewald et al. 2016). Farther west, the birds expanded more than 200 km along the Colorado River in Arizona in the latter half of the 20th century (Kus et al. 2010).

Factors responsible for the range expansion of this small, rather inconspicuous little vireo are not entirely clear. Improved coverage by skilled observers may be contributing to the changes, as well as habitat changes along river corridors that increase the growth of riparian shrubs (Kus et al. 2010). 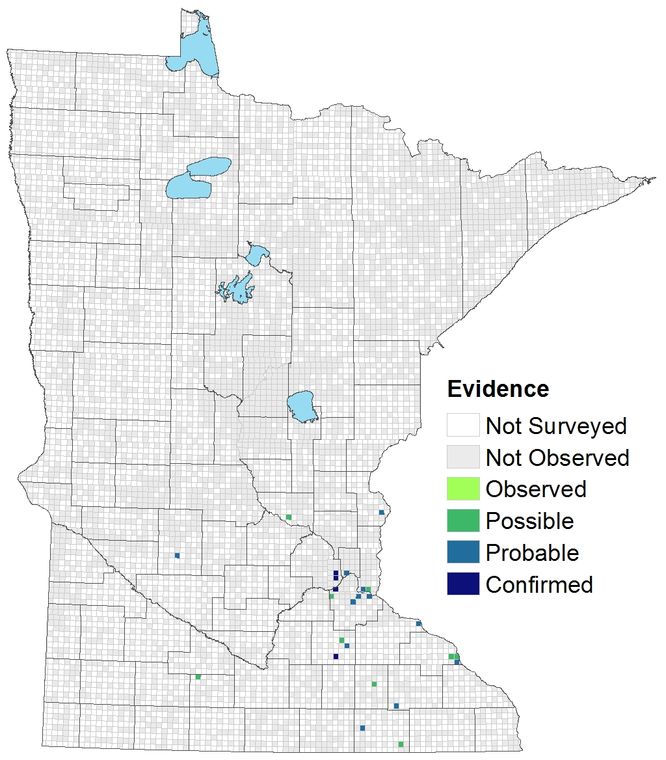 Breeding distribution of the Bell's Vireo in Minnesota based on the Breeding Bird Atlas (2009 – 2013).

Summary statistics of observations by breeding status category for the Bell's Vireo in Minnesota based on all blocks (each 5 km x 5 km) surveyed during the Breeding Bird Atlas (2009-2013).

Summary statistics for the Bell's Vireo observations by breeding status category for all blocks and priority blocks (each 5 km x 5 km) surveyed during the Minnesota Breeding Bird Atlas (2009-2013).

Cumulative number of counties reporting Bell’s Vireo summer season observations from 1960 to 2013, including records compiled by the Minnesota Ornithologists’ Union and the Minnesota Breeding Bird Atlas.

In the arid Southwest the species is associated with scrub oak, coastal chaparral, and mesquite brushlands (Kus et al. 2010). In the Upper Midwest the species is most commonly associated with lowland shrubs in the riparian zones adjacent to river bottomlands and in shrubby thickets within grassland habitats. Wisconsin observers have noted the species’ preference for nesting sites “where draping grapevines, wild cucumber, or Virginia creeper are entwined in the branches” (Cutright et al. 2006).

Brother Theodore (1952) provided a detailed description of the nest sites where he found 6 nesting pairs in Winona County. Most of the nests were found on dry slopes with an overstory of oaks, birch, and poplars. The dense understory contained a wide variety of species, including dogwoods, blackberry and raspberry bushes, sumac, and grasses. Most field guides of his day noted that the birds nested near water. Theodore’s observations, however, found the birds nested away from the water but moved to nearby riparian bottomlands once the young had fledged.

A preference for shrubby thickets often places the Bell’s Vireo in direct conflict with upland grassland management priorities. Woody encroachment by young trees and shrubs can reduce the suitability of a site for many grassland-dependent species. As a result, resource managers frequently employ a variety of management tools to halt succession, including controlled burns, mowing, and herbicide application, thereby eliminating the shrubby thickets preferred by Bell’s Vireo. On the other hand, management efforts to protect riparian buffers along stream and river shorelines to improve water quality can also improve habitat opportunities for the species. 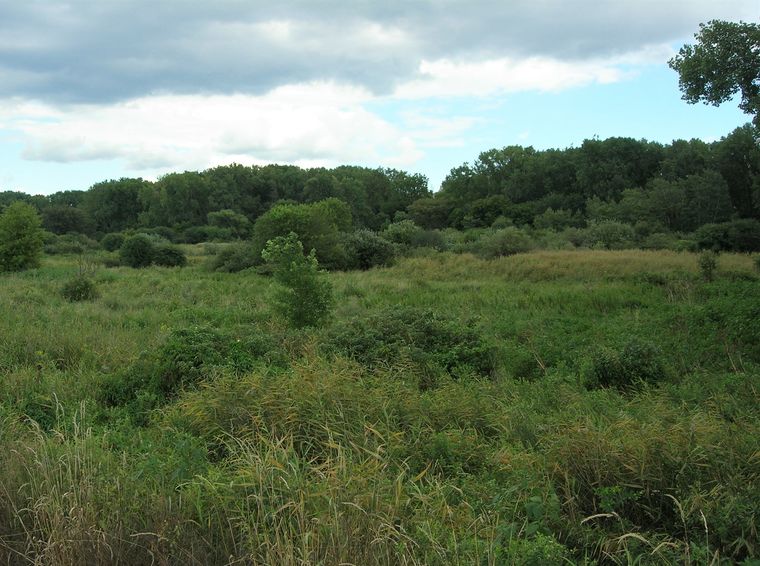 The annual BBS survey does not cover the species’ entire breeding range, only that portion north of Mexico, which comprises approximately 78% of the population (Partners in Flight Science Committee 2013). Within the United States, the overall population trend is stable to slightly increasing. Yet, for several years after the survey first began in 1966, population numbers actually declined, then stabilized. More recently BBS data demonstrate increasing numbers (Figure 6). Overall, populations are estimated to have increased 38% from 1970 to 2014 (Rosenberg et al. 2016). The species is too rare in Minnesota to generate a trend index. A cumulative total of 10 birds have been reported in four separate years on BBS routes in the state since 1967 (Pardieck et al. 2016).

Although the population appears stable across the BBS survey area, there are numerous regional pockets where the species is declining (Figure 7). The principal factors cited are loss of habitat and high rates of cowbird parasitism (Kus et al. 2010). 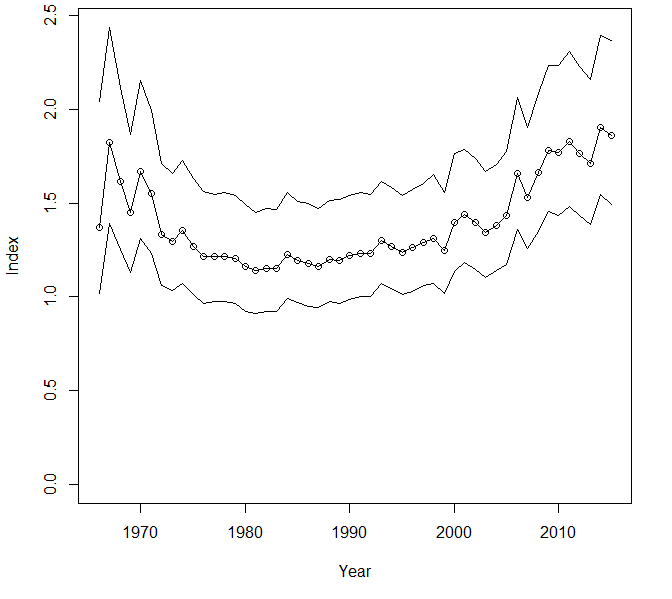 The Bell’s Vireo’s moderate Continental Concern Score (11/20) is a reflection of the federally endangered status of the Least Bell’s Vireo (V. b. pusillus), on which most of the conservation attention on this species has been focused. Management efforts have included restoring the species’ coastal shrub habitat and controlling cowbird parasitism. Efforts to reduce high parasitism rates have also been undertaken elsewhere in the species breeding range in Kansas and Arizona, all with some success (Kus et al. 2010).

The species’ relatively recent addition to the state list of Special Concern Species was prompted by recognition of its “rarity, patchy distribution, and specific habitat requirements.” When it was proposed for listing in 2012, the number of nesting locations was estimated at just 15 (Minnesota Department of Natural Resources 2012). It also is listed as a Species in Greatest Conservation Need (Minnesota Department of Natural Resources 2015).

In the Midwest, loss of habitat and low productivity are the primary concerns regarding the species’ future (Budnik et al. 2002). Low productivity is due to high rates of nest parasitism by Brown-headed Cowbirds and high rates of nest predation. Many of the birds, particularly in Minnesota, are found on protected state wildlife management areas, national wildlife refuges and in state parks. As a result, it is important that resource managers are cognizant of the habitat needs of shrub-dependent species when managing the grassland matrix in which many of these shrub habitats are embedded (Cutright et al. 2006). In Missouri, Budnik and his colleagues (2002) found that habitat for Bell’s Vireo can be improved and nest parasitism and predation rates reduced when the density of large shrub patches (>200 m2) is increased. Their recommendation was to increase the availability of large patches throughout the grassland and reduce the availability of elevated perches for Brown-headed Cowbirds. One of the primary benefits of larger shrub patches was their ability to increase nest concealment.

Although climate change is predicted to pose threats to many species, recent modeling work by the National Audubon Society suggests that the Bell’s Vireo may actually benefit from warming temperatures. This is particularly true for populations in the Midwest. Overall, their models predicted a 366% increase in the species’ breeding range by the year 2080 (Langham et al. 2015; National Audubon Society 2016).

Despite the current rarity of Bell’s Vireo in Minnesota, warming temperatures may result in this “timid, shy, retiring” little vireo becoming a much more abundant member of the state’s avifauna (Bent 1950). In the meantime, an awareness of the needs of shrubland species, particularly in the grassland habitats of southeastern Minnesota, is warranted.