A regular, permanent resident and winter visitant outside its normal range in more southerly areas of Minnesota. The Boreal Chickadee was uncommon during the Minnesota Breeding Bird Atlas (MNBBA).

This species is found throughout the boreal forest of Canada and Alaska, the northern portions of the Upper Midwest, and the northeastern United States. Densities observed were highest in Labrador; high densities may also occur in northern regions of Canada and in Alaska, but they are not well surveyed (Figure 1).

Assigned a Continental Concern Score of 9/20 by Partners in Flight; listed as a Species in Greatest Conservation Need by the Minnesota Department of Natural Resources.

Cavity nester in trees; often self-excavates in a natural cavity but occasionally uses a hole excavated by another species, primarily woodpeckers. 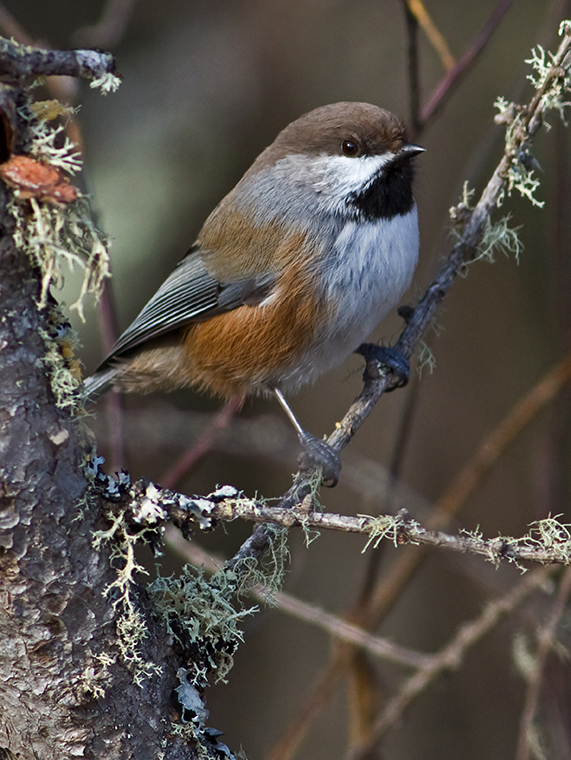 Breeding distribution and relative abundance of the Boreal Chickadee in North America based on the federal Breeding Bird Survey from 2011 to 2015 (Sauer et al. 2017).

Roberts (1932) included a relatively lengthy discussion on the historical status and nesting of the Boreal Chickadee in Minnesota from the late 19th century to the early 20th century. He summarized that “the records for Minnesota are not very numerous and many observers who have passed much time in the field in the northern part of the state have not met with it.” A specific comment by Roberts on its status in the extreme northern part of the state east of Ely, Minnesota, included the following: “Mr. Breckenridge, while spending nearly three weeks in May 1931; some eighteen miles east of Winton, in northern St. Louis County, found the Hudsonian Chickadee as common as the Black-capped Chickadee.” In general, he concluded that this species was a “rather uncommon permanent resident in the extreme northern part of Minnesota.”

At the time of his treatise The Birds of Minnesota in 1932, Roberts reported that Rev. P. B. Peabody was the only individual fortunate enough to find a Boreal Chickadee nest, which he located near Hibbing in St. Louis County on May 24, 1901. Roberts described observations by two of his colleagues, “Kilgore and Breckenridge,” of adults feeding young out of a nest at Big Sandy Lake, Aitkin County, on June 30, 1929. He cited observations by Gustave Swanson in a locality not far north of Deer River, Itasca County, where two adults were carrying food and later, at the same locality, a young bird was being fed by the parents.

More than 40 years later, Green and Janssen (1975) described the Boreal Chickadee distribution as primarily in northeastern and northern Minnesota. They included confirmed nesting in Lake County and St. Louis County. Later, Axelrod (1979), a student at the University of Minnesota, exquisitely described details of a Boreal Chickadee nest found by Bruce Fall in 1977 at La Salle Creek Bog in Hubbard County. Janssen (1987) suggested a more restricted distribution from that defined by Green and Janssen, which largely eliminated Cass County. Both Janssen (1987) and Hertzel and Janssen (1998) summarized confirmed nesting since 1970 in 7 counties: Aitkin, Beltrami, Clearwater, Cook, Hubbard, Lake, and St. Louis.

The Minnesota Biological Survey (MBS) included 74 records of breeding season locations, which were broadly distributed from Itasca County to Cook County (Minnesota Department of Natural Resources 2016). The MBS listed multiple locations in Cook, Lake, Itasca, and St. Louis Counties as well as 2 in northern Aitkin County and 1 in northern Carlton County. As of 2016, the MBS had not yet reported surveys in northern Beltrami, Koochiching, or Lake of the Woods Counties.

The MNBBA included 219 records of the Boreal Chickadee. The records encompassed a distribution similar to what was described by Janssen (1987), from Cook County to Roseau County and south to Aitkin County (Figure 2). No observations of the species were recorded from Carlton, Clearwater, or Hubbard Counties, but confirmed nesting was reported from Lake of the Woods and Koochiching Counties. (Figure 3; Table 1). Boreal Chickadees were reported from 3.0% (141/4,733) of all blocks sampled and 3.2% (75/2,337) of priority blocks. Probable nesting was recorded from 23 blocks as far west as Roseau and Beltrami Counties and south to northern Aitkin County.

Overall, the Boreal Chickadee is a regular nesting species throughout many northern and northeastern counties in Minnesota. However, it’s relatively low abundance, its remote forested habitats, and its lack of a territorial “advertising” song during the breeding season all make it difficult to observe the species on the breeding grounds, let alone to find nests.

Ficken et al. (1996), in their review of the Boreal Chickadee in North America, do not identify any information on historical changes in its distribution. Breeding bird atlas data in Michigan, Ontario, and Wisconsin indicate there has been little change in the historical distribution of this species (Cadman et al. 2007; Cutright et al. 2006; Chartier et al. 2013). However, historical data on the species are lacking from the 19th century and even the early to mid-20th century. For instance, the first nest in Michigan was not found until 1954, and the first nest in Wisconsin was found in 1959. Ficken et al. (1996) pointed out that in the Adirondack Mountains, Boreal Chickadees were rare until the late 1960s, when the population began to increase. They attributed the recovery of the population to reforestation in that region. 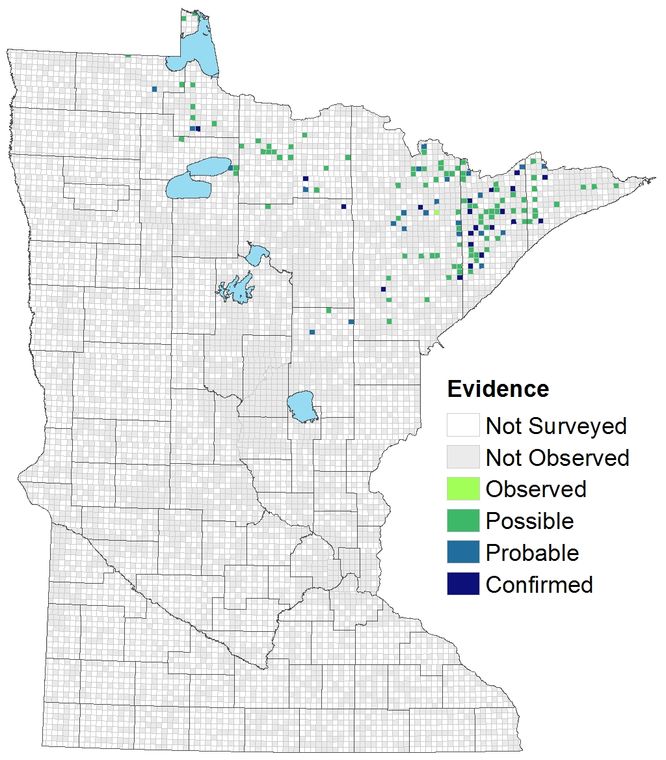 Breeding distribution of the Boreal Chickadee in Minnesota based on the Breeding Bird Atlas (2009 – 2013).

Summary statistics of observations by breeding status category for the Boreal Chickadee in Minnesota based on all blocks (each 5 km x 5 km) surveyed during the Breeding Bird Atlas (2009-2013).

Summary statistics for the Boreal Chickadee observations by breeding status category for all blocks and priority blocks (each 5 km x 5 km) surveyed during the Minnesota Breeding Bird Atlas (2009-2013). 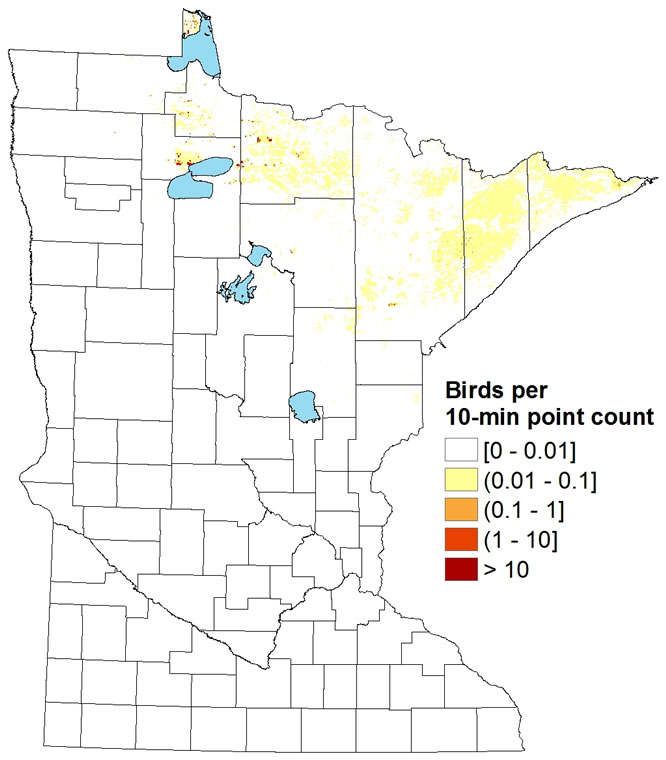 Predicted breeding distribution (birds detected per 10-minute point count) of the Boreal Chickadee in Minnesota based on habitat, landscape context, and climate data gathered during the Minnesota Breeding Bird Atlas (2009-2013) using the General Linear Modeling method without an adjustment for detectability.

Throughout their range, Boreal Chickadees breed in boreal coniferous and mixed coniferous-deciduous woodlands (Ficken et al. 1996). In Minnesota, most breeding observations occur in the lowland coniferous forests comprised of black spruce, tamarack, and white cedar (Figure 5). In the Superior National Forest, Green and Niemi (1978) reported this species primarily in open, ericaceous-muskeg bogs with black spruce. The species is reported from a variety of upland habitats, but usually when balsam fir, white spruce, or pine are present (Niemi and Hanowski 1992). Cadman et al. (2007) cited a potential positive association of Boreal Chickadees with outbreaks of spruce budworm.

A detailed study of breeding habitat of the Boreal Chickadee in the Agassiz Lowlands Subsection of northern Minnesota found the species was primarily associated with productive and mature black spruce–tamarack bogs, and to a lesser extent with mixed lowland white cedar and stagnant black-spruce bog cover types (Bednar et al. 2016). Using these data, habitat and landscape modeling found a strong association of the species with the proportion of evergreen forest within 200 m of where it was present and the density of streams (Zlonis et al. 2017). 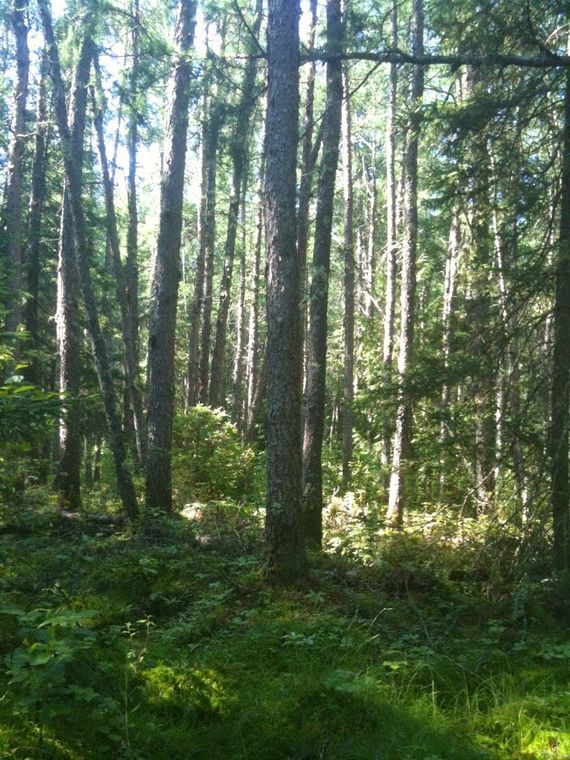 Habitat profile for the Boreal Chickadee based on habitats within 200 m of point counts where the species was present during the Minnesota Breeding Bird Atlas (2009-2013).

Populations in North America were estimated by Partners in Flight (Rosenberg et al. 2016) as 12 million breeding adults. Partners in Flight used the federal Breeding Bird Survey (BBS) roadside routes to estimate populations, so this estimate should be interpreted with caution. However, the Partners in Flight estimate fell within the 5 to 50 million adults estimated by Canada, where the species’ primary distribution occurs (Environment Canada 2014). Boreal Chickadee population estimates were not included for Minnesota from the MNBBA, because of too few observations.

BBS trend estimates for the Boreal Chickadee also were unreliable for all states, provinces, regions, and survey-wide in North America with one exception, Nova Scotia. This province had a significantly declining population of 4.35% per year from 1966 to 2015. The mean count per route of Boreal Chickadees was well below 1 detection per route per year in Minnesota, whereas the highest mean count in Nova Scotia was 1.2 detections per route per year. Environment Canada (2014) concluded there has been little change in the overall population since 1970. Despite the lack of reliable trend estimates, Partners in Flight noted an increase of 32% in its North American population between 1970 and 2014 (Rosenberg et al. 2016).

The National Forest Bird Monitoring Program in the Chippewa and Superior National Forests from 1995 to 2010 recorded a total of 79 Boreal Chickadees in 13,887 10-minute point counts, or cumulatively 2,316 hours (96 days) of counting! The mean detections in the Chippewa and Superior National Forests were 0.13 and 0.21 pairs per 40 ha, respectively (Niemi et al. 2016). Within specific habitats in the Agassiz Lowlands of northern Minnesota, Boreal Chickadees had the highest densities of 8.4 pairs per 40 ha in productive black-spruce tamarack forests. The species was also found in mixed lowland white cedar and stagnant black spruce forests in the Agassiz Lowlands, but mean densities were lower, 4.2 pairs per 40 ha.

In Canada, Erskine (cited by Ficken et al. 1996) reported densities of 4 to 19 pairs per km2, with most breeding counts in suitable habitat approaching the lower number. Erskine also noted higher numbers during spruce budworm outbreaks of 8.7 birds per km2 compared with counts during low-budworm years of 5.1 birds per km2 in four stands sampled.

The Boreal Chickadee has a moderately low Continental Concern Score of 9/20 in its North American Assessment (Rosenberg et al 2016). There is limited concern about the species in the United States, but Environment Canada (2014) included the Boreal Chickadee as a species of conservation priority in several of its bird conservation regional strategies.

The Minnesota Department of Natural Resources (2015) listed the Boreal Chickadee as a Species in Greatest Conservation Need because of potential habitat loss, degradation, and fragmentation. The department included several Conservation Focus Areas in its Minnesota Wildlife Action Plan, 2015–2025 (Minnesota Department of Natural Resources 2016) for management to maintain large blocks of mature forest to benefit this species.

Langham et al. (2015) and the National Audubon Society (2015), in their review of North American birds susceptible to climate change, designated the Boreal Chickadee as “climate endangered.” They predicted a 60% decrease in its summer range by 2080, including extirpation from Minnesota. Given its extreme northern distribution, it is one of the species most vulnerable to being lost as a resident species in the state.

Cadman et al. (1987) noted Boreal Chickadees have a preference for forests of poor quality that are not extensively harvested. Furthermore, they suggest that because of the species’ northerly distribution, it has not been historically affected by agriculture, urbanization, or in most areas by logging activity. Recently in Minnesota, there has been an increased interest in logging of coniferous forests, including black spruce (Bednar et al. 2016). Bednar et al. (2016) cautioned that extensive logging of mature black spruce–tamarack stands with high habitat suitability indices could negatively affect Boreal Chickadees. Similar concerns were expressed by Foss (1994) about the harvesting of boreal forests in New Hampshire. Ficken et al. (1996) reported that increased logging activity in Ontario may reduce local winter habitat (especially old black spruce) for Boreal Chickadees.

Gillespie and Kendeigh (1982) suggested that the Boreal Chickadee was a forest-interior species and avoided forest edges. As stated earlier, this was supported by habitat modeling by Bednar et al. (2016) in the Agassiz Lowlands Subsection. Niemi and Hanowski (1992), in their analysis of increased forest harvesting and management in Minnesota, predicted the amount of available habitat for Boreal Chickadees would decline under the moderate (4.9 million cords per year) and intensive (7 million cords per year) harvest scenarios in Minnesota. However, these harvesting levels have never occurred in Minnesota.

In summary, we still know little about the nesting biology of the Boreal Chickadee in Minnesota, but the effects of climate change will likely be the most important issue this species will face in Minnesota in the future.