A regular breeding species and migrant; occasionally observed during the winter months on open water, especially Lake Superior, and may occasionally overwinter. The Bufflehead was a rare species during the Minnesota Breeding Bird Atlas (MNBBA).

The breeding distribution of Bufflehead stretches from Alaska east to western Quebec, dipping south into the United States in portions of the northwest and north-central states, including Minnesota. Highest breeding densities are restricted to regions of Alaska and western Canada. Its distribution and relative abundance in southern Canada and the United States, as depicted by the federal Breeding Bird Survey (BBS), are shown in Figure 1.

A game species, the Bufflehead was assigned a Moderate Continental Priority by the North American Waterfowl Management Plan. Partners in Flight assigned it a Continental Concern Score of 10/20.

A diving duck that feeds primarily on aquatic invertebrates during the summer but also consumes seeds of aquatic plants, mollusks, and crustaceans during migration and winter.

Secondary-cavity nester that nests in tree cavities up to 0.5 to 3 m above the ground; sometimes uses nest boxes. 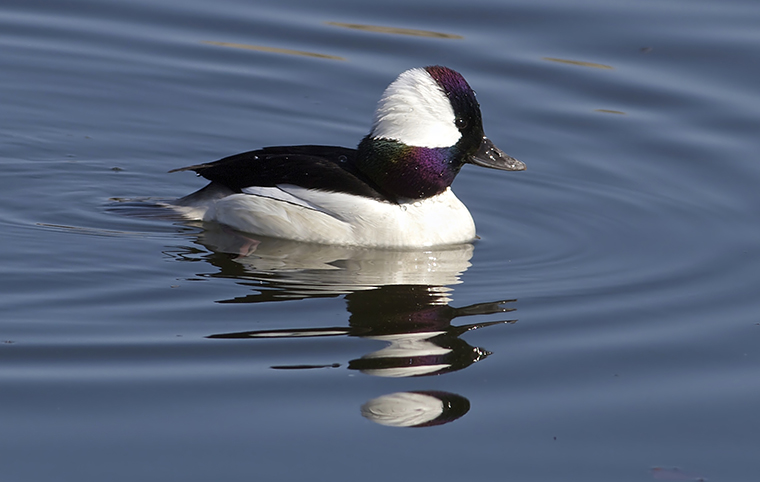 Breeding distribution and relative abundance of the Bufflehead in North America based on the federal Breeding Bird Survey from 2011 to 2015 (Sauer et al. 2017).

For many years, Minnesota was considered simply a migratory stopover for this handsome little duck as it traveled to and from its breeding range in the Canadian boreal forest. In the early 1900s, Roberts (1932) described it as a common spring and fall migrant that was on rare occasions found during the winter as well. Although he described the species as a common migrant, he also remarked that it was formerly much more abundant, “passing through the state in flocks of considerable size, while now it is usually seen in pairs or little parties of a half-dozen or so.”

At the time of his writing, there were no confirmed breeding reports in the state. He did speculate, however, that the species may occasionally nest in the Northwest Angle. Also included in his account is a brief note that Breckenridge observed a single bird on Winchell Lake, Cook County, in July 1928, suggesting that the bird might occasionally nest in this region of the state.

Fifty years later, Green and Janssen (1975) reported that the Bufflehead still had not been confirmed nesting in Minnesota. They classified it as a “casual visitant in the northern half of the state.” Single birds had been reported during the summer months in Cass, Clearwater, Cook, Douglas, Kittson, Mahnomen, Marshall, and St. Louis Counties. There also was a report of 3 birds in August 1963 in Chisholm, St. Louis County.

The first confirmed nesting report came in 1978 with a report by Minnesota Department of Natural Resources (MNDNR) wildlife manager, George Davis (Davis 1978). A brood of Buffleheads was observed on three different occasions on the East Park Wildlife Management Area (WMA) in Marshall County. Davis’s report also included a note that a colleague, area wildlife manager Jack Jensen, also reported, presumably in earlier years, broods of Bufflehead on the Roseau River WMA in Roseau County. Seven years later nesting was documented a little farther south, again in Marshall County on the Agassiz National Wildlife Refuge (Bell 1985). Since then, most nesting reports have continued to come from wetlands in Marshall County with one notable exception in 1983, when a brood was reported in Carver County (Heidel 1983). In 1998, Hertzel and Janssen added Beltrami County to the short list of counties where nesting has been confirmed.

Over the years, birders have continued to report an increasing number of summer observations from most of the counties in northern Minnesota as well as from several counties in central and south-central Minnesota (Minnesota Ornithologists’ Union 2016). But there is considerable variability in the number and distribution of reports from year to year. Despite these wide-ranging reports, Marshall County has remained the core of the species’ breeding range in the state. Following the initial report of nesting in 1985, the number of nesting pairs and young broods has continued to increase. A study initiated on the Agassiz National Wildlife Refuge (NWR) by the University of North Dakota estimated nearly 200 nesting pairs on the refuge between 2008 and 2012 (Danelle Larson, MNDNR, pers. comm. 2017). The Minnesota Biological Survey has reported only 2 breeding season locations during the course of its fieldwork: 1 each in Clearwater County and Marshall County (Minnesota Department of Natural Resources 2016).

During the MNBBA, participants reported 27 Bufflehead records from only 23 of the surveyed atlas blocks and from 11 of the priority blocks. Breeding was confirmed in 13 (0.3%) surveyed blocks (Figures 2 and 3; Table 1). The birds were observed in 10 of Minnesota’s 87 counties and were confirmed breeding in 3 counties. Fourteen of the 23 atlas blocks, including 11 of the blocks with confirmed nesting records, were from eastern Marshall County, in or adjacent to the Agassiz NWR and the Thief Lake WMA. The 2 other nesting records were from Roseau County to the north and, most surprisingly, more than 350 miles to the south, in Cottonwood County! The latter record was of a hen and brood on the Hurricane WMA and was confirmed with a photo.

The southern Minnesota breeding record may not have been such a rarity in the 1800s. Gauthier (2014) references old breeding records from New Brunswick, Maine, and the northern Great Plains that suggest the species may have ranged farther south and east of its current breeding range in the late 1800s and early 1900s. On the other hand, the species’ presence in southern Minnesota would surely have been noticed even in Roberts’s time. 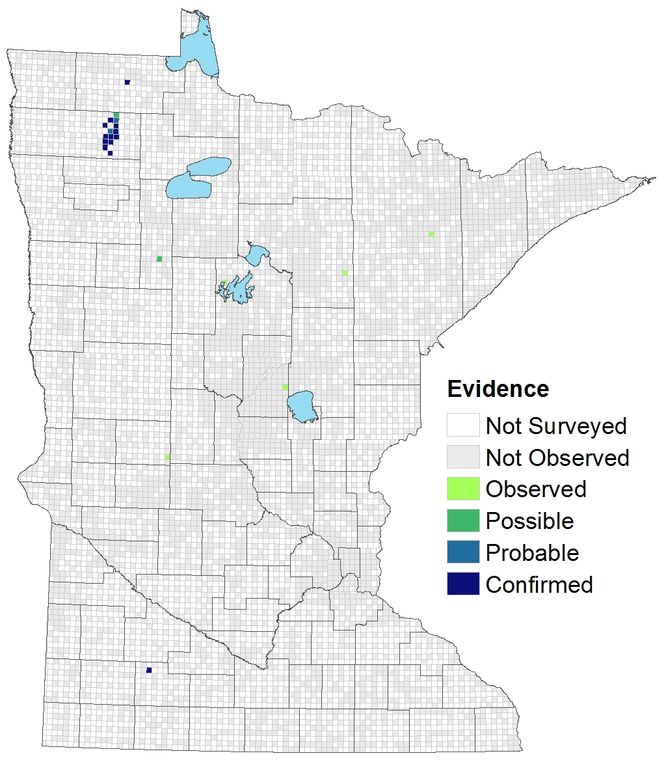 Breeding distribution of the Bufflehead in Minnesota based on the Breeding Bird Atlas (2009 – 2013).

Summary statistics of observations by breeding status category for the Bufflehead in Minnesota based on all blocks (each 5 km x 5 km) surveyed during the Breeding Bird Atlas (2009-2013).

Summary statistics for the Bufflehead observations by breeding status category for all blocks and priority blocks (each 5 km x 5 km) surveyed during the Minnesota Breeding Bird Atlas (2009-2013).

A species of the boreal forest and aspen parklands, Buffleheads are found in mixed coniferous and deciduous forests dominated by small lakes and wetlands (Figure 4). Wetlands and lakes with extensive beds of emergent and submerged vegetation are usually avoided (Gauthier 2014). However, as for many boreal nesting species, detailed studies describing their habitat requirements are scarce.

A secondary-cavity nester, the Bufflehead selects mostly nest cavities that are excavated by Northern Flickers, a common species throughout the Bufflehead’s breeding range (Gauthier and Smith 1987). Nest trees are usually located near small freshwater lakes and permanent wetlands. In Ontario, where the probability of observing Buffleheads “increased several-fold” between the first (1981–1985) and second (2001–2005) atlas, the increase occurred in spite of a documented decline in Northern Flickers in the province (Cadman et al. 2007). The authors noted, however, that the Pileated Woodpecker population had been increasing. 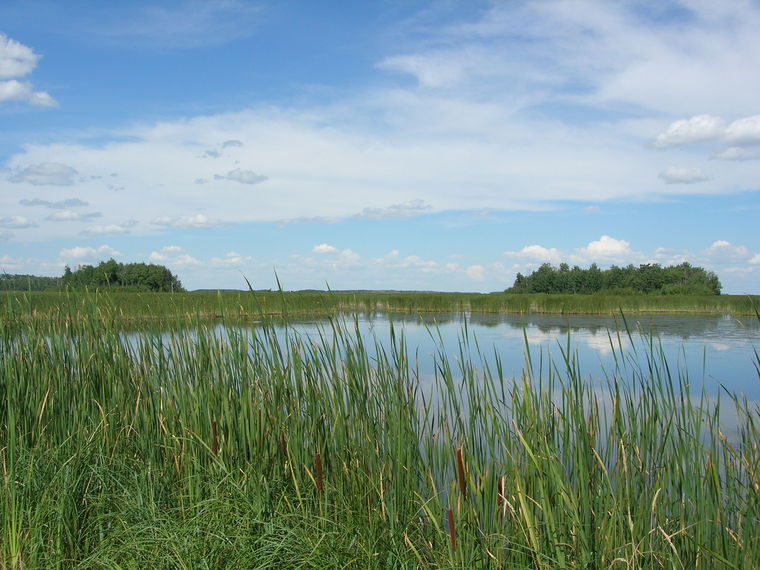 The Waterfowl Breeding and Habitat Survey conducted by the U.S. Fish and Wildlife Service and the Canadian Wildlife Service is the primary tool for monitoring waterfowl populations in North America. Of the two survey areas delineated, approximately 90% of the Bufflehead population occurs within the Traditional Survey Area, which extends throughout the Prairie Pothole Region and the central and western Canadian provinces (Baldassarre 2014). Unfortunately, because it is not a targeted game species, annual population numbers are not included in the annual survey reports, but they are available from other published accounts and from an online database maintained by the U.S. Fish and Wildlife Service.

In 2014, Baldassarre reported that Bufflehead numbers within the Traditional Survey Area increased from an average of just over 471,000 in the 1960s to an average of 1.09 million from 2000 to 2010. From 2011 to 2015 numbers increased yet again to an average of 1.44 million (Figure 5). Over the same time period, the National Audubon Christmas Bird Count demonstrated a similar population increase (Figure 6), and data collected by the federal Breeding Bird Survey (BBS) reinforced the same upward trend line (Sauer et al. 2017). The 2012 update to the North American Waterfowl Management Plan (2012) estimated the continental population across its entire range at 1.67 million birds.

Few other waterfowl species have demonstrated such a significant, long-term population increase since the Waterfowl Breeding and Habitat Survey began. An overall reduction in fall hunting mortality, particularly in Canada, may be partly responsible for the population increase (Gauthier 2014).

Buffleheads are included in the annual waterfowl survey conducted in Minnesota. However, the survey is more accurately an index of the migratory population traveling north to Canadian breeding grounds than an index of the small breeding population in the state. As such, the numbers vary widely from year to year (Figure 7). 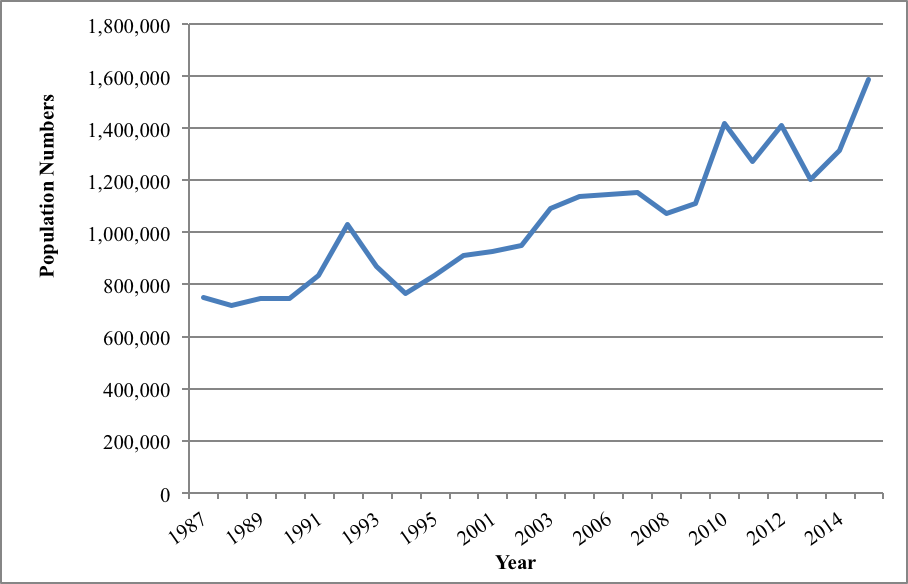 Population Trend of the Bufflehead in the Traditional Survey Area of the Waterfowl Breeding and Habitat Survey, 1987-2015 (U.S. Fish and Wildlife Service 2016). 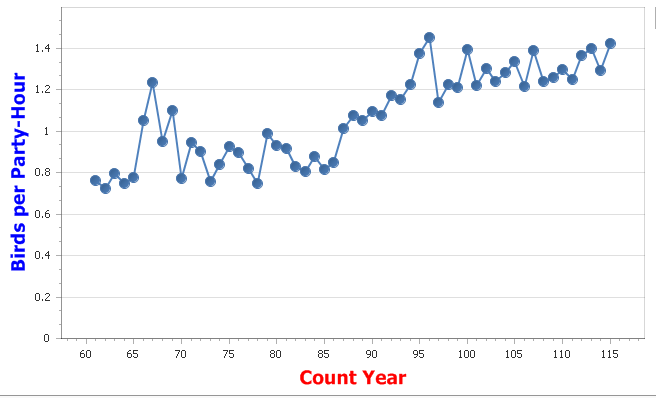 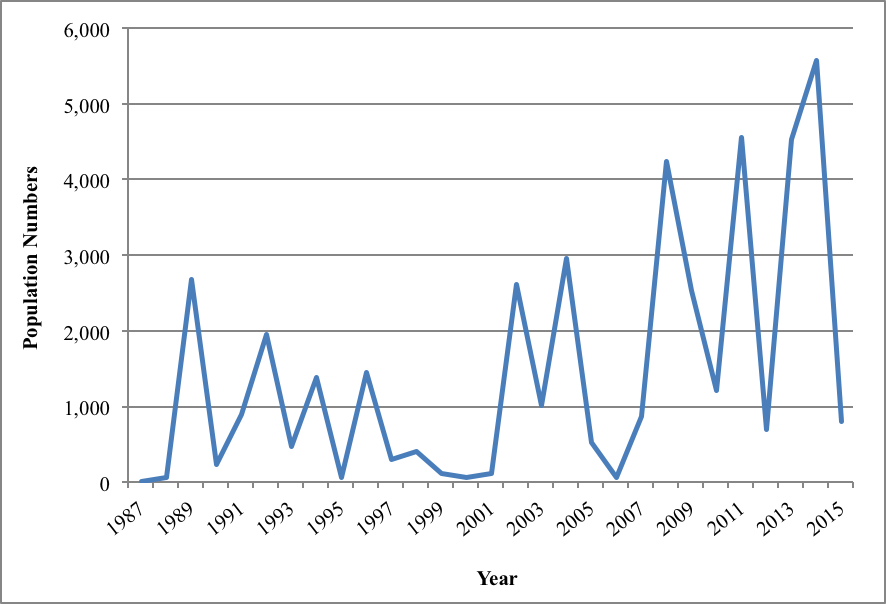 Bufflehead numbers reported during the Minnesota Waterfowl Survey, 1987–2015 (data not corrected for visibility; taken from data presented in Cordts 2015).

Bufflehead numbers declined significantly at the turn of the century due to overhunting but have been on the rebound ever since. In light of this increase and because Buffleheads are not a highly desirable game species, the North American Waterfowl Management Plan has assigned the species a Moderate Continental Priority. Partners in Flight (2017) assigned it a moderate Continental Concern Score of 10/20.

Today harvest numbers for this small diving duck are relatively small compared to the harvest of many dabbling ducks. During the 2015 hunting season, a total of 208,683 birds were harvested in the United States, comprising 1.9% of the total duck harvest. That same year 23,690 birds were harvested in Minnesota, or 11.4% of the total United States Bufflehead harvest (Raftovich et al. 2016).

Although it is not an important species in the Prairie Pothole Region, the Bufflehead is one of 15 waterfowl species targeted by the Sea Duck Joint Venture. Established in 1999, this initiative is focused on maintaining sustainable populations of North American sea ducks. Eiders, scoters, goldeneyes, and mergansers are included, as are the Long-tailed Duck and Harlequin Duck. The Sea Duck Joint Venture initiative was launched specifically because these birds differ substantially from the more intensively studied dabbling ducks in their reproductive strategies, breeding behavior, and ecology. They tend to be long-lived species that often delay breeding and display site fidelity, behaviors that may increase their vulnerability (see SeaDucks.org). Through a range of different partnerships, the Sea Duck Joint Venture is focused on improving knowledge of these species and initiating targeted conservation measures.

A recent analysis by the National Audubon Society examined the potential impacts of climate change on 588 breeding birds, including the Bufflehead. The analysis predicted a 59% decrease in the size of the species’ breeding range by the year 2080 and classified the species as “climate endangered” (Langham et al. 2015; National Audubon Society 2016). The decrease would be most significant in western Canada, a region that currently is the core of the species’ breeding population.

In Minnesota, the aspen parklands are central to the species’ continued presence, particularly public wetlands such as the Agassiz National Wildlife Refuge and the multitude of state WMAs in the northwest region. Targeted wetland protection and restoration efforts in this region are critical to many wetland-dependent species, including the Bufflehead.