A regular migrant and summer visitor but only a very rare breeding species since 1969. The Caspian Tern was a rare species during the Minnesota Breeding Bird Atlas (MNBBA).

Global in distribution, in North America Caspian Tern populations are widely separated from one another and occur along the Gulf coast, the north Atlantic coast, the Pacific coast with some interior western populations, the Great Lakes, and in central Canada. Within each of these areas, colonies are uncommon and small, occurring at widely scattered locations (Figure 1).

Assigned a Continental Concern Score of 12/20 by Partners in Flight and designated a species of Low Concern by the North American Waterbird Conservation Plan.

Northern populations are medium-distance migrants; southern coastal populations may include both year-round residents and birds that migrate. Migrants spend winters along the southern coasts of the United States and in coastal habitats as far south as northern South America.

A shallow depression on the ground often lined with vegetation, pebbles, or debris. 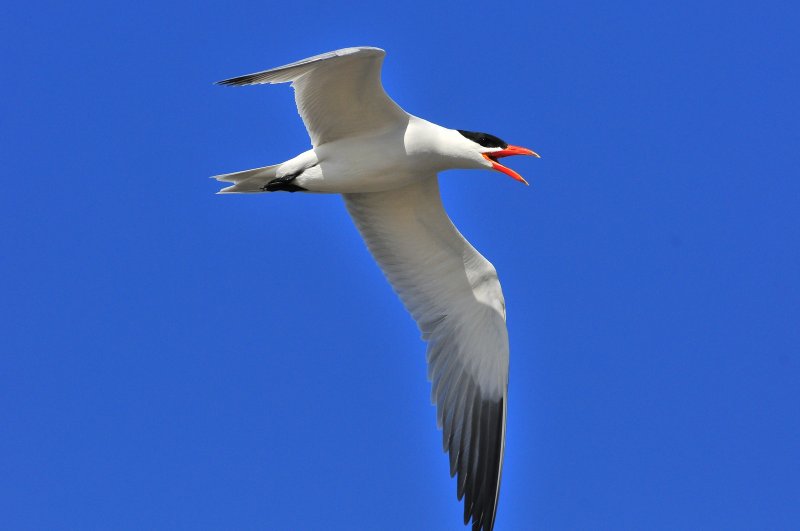 Breeding distribution and relative abundance of the Caspian Tern in North America based on the federal Breeding Bird Survey from 2011 to 2015 (Sauer et al. 2017).

In Minnesota, Roberts (1932) described the Caspian Tern as a regular spring and fall migrant, usually passing through in small numbers and frequently spotted near many of the state’s largest lakes and rivers. There were occasional reports during the summer months but no documented nesting records. Most summer records were from the northern lake region, but the birds were occasionally seen the first 10 days of June at Lake Minnetonka, and 1 was taken on June 10, 1920, in Le Sueur County. Together, these records prompted Roberts to comment that at least a few birds must nest somewhere in the state.

When Green and Janssen (1975) wrote their updated status accounts of Minnesota birds more than 40 years later, the first Caspian Tern nesting attempt had been documented on Leech Lake in 1969 (Warner and Beimborn 1969). Two nesting pairs were found on Gull Island, a tiny site less than 1 acre in size, next to a large nesting colony of Common Terns. The island’s sparsely vegetated, gravel beach provided ideal habitat for both species. Indeed, Roberts himself, had observed “six or seven full-plumaged Caspian Terns” at the same site on July 15, 1921, but found no evidence of breeding.

The Leech Lake nesting may have represented a southward expansion of the breeding population in central Canada. The nearest known colonies at the time were on Lake Winnipeg and Lake Winnipegosis, nearly 650 km north of Leech Lake (Wires and Cuthbert 2000). Warner and Beimborn (1969) reported that the nearest active colonies were located to the east in Lake Superior (Gravel Island) and Lake Michigan (Beaver Islands). Recent accounts of the tern’s historical status in Wisconsin, however, do not mention either of these sites as active tern colonies in the 1960s. Historically, there have been sporadic, well-documented nesting efforts since the late 1800s on a variety of islands in Lake Michigan’s Green Bay, a region not much farther from Leech Lake than Lake Winnipeg and Lake Winnipegosis (nearly 720 km) (Cutright et al. 2006). Elsewhere, beginning in the 1960s, the Caspian Tern demonstrated significant range expansions throughout much of its range. Birds were moving north along the Pacific coast, south along the Gulf coast, and south from the large freshwater lakes in central Canada (Cuthbert and Wires 1999).

Unfortunately, Minnesota’s first documented nesting on Leech Lake was not successful and stood as the solitary record for 35 years. Then, in 2004, 1 nest with 3 eggs was found on Hennepin Island in Lake Mille Lacs, within another well-known Common Tern colony (McDowell 2004). This nesting attempt also was unsuccessful.

In the interim, natural resources staff with the Leech Lake Band of Ojibwe’s Division of Resources Management (DRM) began closely monitoring waterbird nesting efforts on Leech Lake and actively managing the islands to provide suitable nesting habitat. Mortensen and Ringle provided a comprehensive account of this work in 2007. The focus of their efforts was on the Common Tern colony, but they closely tracked the presence and nesting efforts of other colonial waterbirds as well, including Caspian Terns, Double-crested Cormorants, American White Pelicans, Herring Gulls, and Ring-billed Gulls.

Their records document that nonbreeding adult Caspian Terns were observed on Leech Lake every year from 1990 through 2007, except in 1992. In 1990, a record 1,200 birds were observed, but in other years numbers usually ranged from 10 to 100 adults (Mortensen and Ringle 2007). DRM staff assumed the terns were late migrants, immatures, or birds that had unsuccessfully nested elsewhere. Then, in 2007, 13 pairs of Caspian Terns nested successfully on Little Pelican Island, just north of their original nesting attempt on Gull Island, fledging a total of 11 chicks. The birds have continued to successfully nest on the island in following years. In 2010, the colony had grown to 43 nests; in 2015, 130 nests were documented (Hamilton and Cuthbert 2016) and in 2016, 129 nests were reported (Minnesota Ornithologists’ Union 2017).

Mortensen and Ringle (2007) suggested several factors may have prompted the tern’s recent nesting efforts. As noted above, DRM staff began intensive management efforts on Little Pelican Island to improve nesting opportunities for Common Terns. The terns had moved to the island in 1989 after Ring-billed Gull numbers on Gull Island exploded, leaving little room for the later-arriving Common Terns to nest. Management activities included gradually clearing the island’s woody vegetation over a period of six years (Mortensen 2009) to create about 1 hectare of open beach habitat that was very attractive to both Common and Caspian Terns. A buffer zone around the island was also established during the open-water season to reduce public disturbance, and an island stabilization project was initiated in 2000 to mitigate shoreline erosion.

During the course of the MNBBA, Little Pelican Island remained the only active Caspian Tern breeding colony in the state. Observers reported the species in just 17 of the surveyed atlas blocks and in only 5 of the priority blocks (Figures 2 and 3; Table 1). The birds were observed in 8 of Minnesota’s 87 counites; most observations were in the vicinity of Leech Lake.

Since the MNBBA was completed, a second Minnesota nesting site was discovered on one of the remote islands near the Northwest Angle in Lake of the Woods. When the site was first visited on June 25, 2017 there were a total of 35 nests with eggs; during the second visit on July 3, a total of 60 nests and 98 adults were counted (K. Bardon and C. Herwig, personal communication, 2017). Like many of the small islands near the Angle, the site also has supported nesting colonies of Common Terns, Ring-billed Gulls, American White Pelicans, and Double-crested Cormorants in past years. 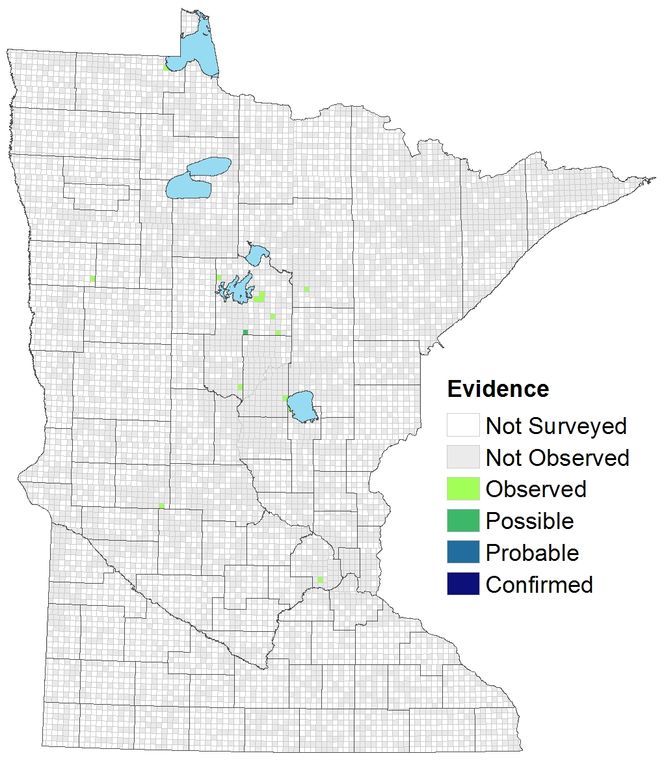 Breeding distribution of the Caspian Tern in Minnesota based on the Breeding Bird Atlas (2009 – 2013).

Summary statistics of observations by breeding status category for the Caspian Tern in Minnesota based on all blocks (each 5 km x 5 km) surveyed during the Breeding Bird Atlas (2009-2013).

Summary statistics for the Caspian Tern observations by breeding status category for all blocks and priority blocks (each 5 km x 5 km) surveyed during the Minnesota Breeding Bird Atlas (2009-2013).

Throughout their breeding range, Caspian Terns may be found in a variety of habitats, ranging from coastal estuaries to barrier islands to alkaline and freshwater lakes. In the Great Plains, they are found nesting on islands in large freshwater or alkaline lakes. In the Great Lakes, they nest on remote, natural islands and, more recently, on some man-made habitats such as dredge spoil islands (Wires and Cuthbert 2000; Shuford and Craig 2002). All sites share three common characteristics. First, they are remote, affording little access by ground predators or humans; second, they are close to an abundant fish resource; and third, they are sparsely vegetated.

Minnesota’s sole colony, located on Little Pelican Island, is a relatively flat, sandy, and gravelly beach with little vegetative cover (Figure 4). Much of the cover was removed in the early 2000s to reduce the habitat and nesting materials available to cormorants and provide improved nesting conditions for the island’s Common Tern colony (Mortensen 2009). 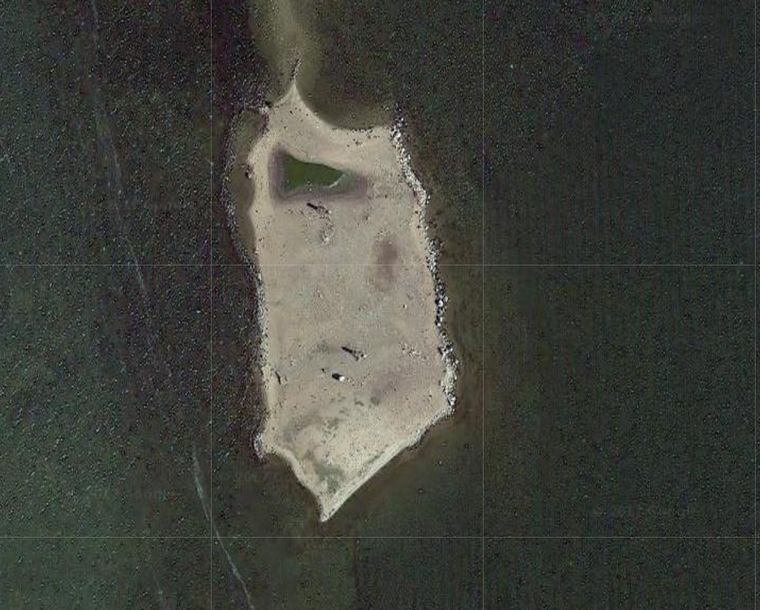 There is no systematic population monitoring program that consistently tracks Caspian Tern breeding populations across North America. Although the federal Breeding Bird Survey (BBS) tracks Caspian Tern numbers, the survey is not well suited for colonial waterbird species, particularly species like the Caspian Tern that nest on a relatively small number of remote islands.

Nevertheless, local resource agencies often monitor local colonies, gathering important trend information. In 2000, Wires and Cuthbert contacted biologists and natural resource professionals across North America in an effort to conduct a comprehensive review of the tern’s population size and distribution. Their assessment generated an approximate population size of 32,000 to 34,000 breeding pairs of terns in North America from the late 1980s to 1998. Approximately 20,948 pairs nested in the United States. This represented a significant increase above the number of pairs estimated from the mid-1970s to the early 1980s of 9,454 pairs (Spendelow and Patton 1988). The number of pairs in each of five continental populations delineated by Wires and Cuthbert (2000) is shown in Table 2.

Numerous factors have likely contributed to the recent population increase. In the Great Lakes region, in particular, declines in predatory fish populations have resulted in a greater abundance of forage fish, providing a plentiful food supply for waterbirds like the Caspian Tern. The remote location of many nesting sites also affords protection, and the species’ acceptance of artificial nesting sites, such as dredge spoil islands, has provided more nesting opportunities (Cuthbert and Wires 1999; Wires and Cuthbert 2000).

The Caspian Tern is not considered a high conservation priority at either the federal or state level. A moderate Continental Concern Score of 12/20 reflects concern regarding its small population size and threats to its breeding habitat (Partners in Flight 2017). The Northern Prairie and Parkland Regional Waterbird Plan ranked it as of Moderate Concern (Beyersbergen et al. 2004), and the Upper Mississippi Valley/Great Lakes Waterbird Conservation Plan (Wires et al. 2010) ranked it from “no risk” to “low risk” depending on the specific area examined.  The North American Waterbird Conservation Plan designated it to be a species of Low Concern (Kushlan et al. 2002).

Regardless, as a colonial nesting species with a relatively small population, the Caspian Tern warrants continual vigilance. Because the tern is dependent on coastal environments throughout much of its range, rising water levels will certainly pose a threat in coming years. Indeed, recent work conducted by biologists with the National Audubon Society has predicted that the species could lose up to 94% of its current breeding habitat by the year 2080 due to warming temperatures (Langham et al. 2015; National Audubon Society 2016). They classified it as a “climate threatened” species.

In the interim, intensive efforts to protect known colonies and provide additional nesting sites are critically important. Efforts are underway in the Pacific Northwest’s Columbia River estuary to reduce the size of North America’s largest Caspian Tern colony on East Sand Island (1,700 nesting pairs in 2008) by providing alternative nesting sites elsewhere in Oregon’s interior and in the San Francisco Bay. This move is driven by the bird’s predation on the river’s important salmonid fishery but has the added benefit of redistributing a highly concentrated population to a larger number of smaller sites (Collis and Roby 2008). In Minnesota, the efforts of the Leech Lake Band of Ojibwe to provide and maintain suitable habitat on Little Pelican Island have been critical for Common Terns. These efforts have provided the added benefit of attracting Caspian Terns and should continue to be supported by Minnesota’s conservation community.