A regular breeding species and migrant. The Eastern Kingbird was a common species during the Minnesota Breeding Bird Atlas (MNBBA).

The Eastern Kingbird can be found throughout much of Canada, from the southern reaches of the Yukon and the Northwest Territories east across the boreal forest region to Newfoundland and southern Quebec. In the United States it is absent only from the southwestern states and along the Pacific Coast. Within its breeding range, populations reach their highest breeding densities within the Prairie Pothole Region and Central Mixed Grass Prairie (Figure 1).

A long-distance, Neotropical migrant that winters in South America.

An aerial insectivore that also gleans insects from foliage and dives after prey items on the ground. Also consumes some fruit and seeds during the breeding season.

An open-cup nest usually placed within the upper third of a tree. Bits of trash, such as twine or plastic, may appear in the nest. 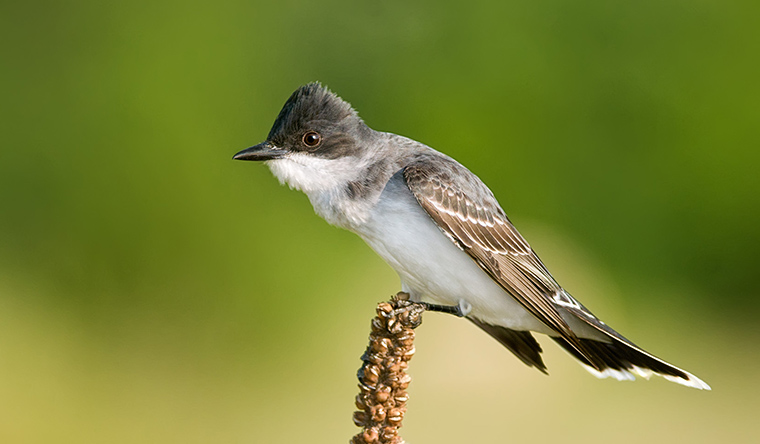 Breeding distribution and relative abundance of the Eastern Kingbird in North America based on the federal Breeding Bird Survey from 2011 to 2015 (Sauer et al. 2017).

As early as the late 1800s, Hatch (1892) recognized the Eastern Kingbird, a prominent bird of the open country, as a species he was “sure of seeing” wherever he travelled in the state. Little had changed 40 years later, when Roberts (1932) described it as an abundant breeding species throughout Minnesota. Dressed in its rather formal black and white attire, the Eastern Kingbird is easy to spot wherever it is present. Roberts wrote:

The Kingbird is such an abundant, noisy, and conspicuous fellow that it is probably one of the best-known birds in the state. It is everywhere from early May until September, in forests, in orchards, on the prairies, and in the outskirts of towns and cities, and is one of the most frequent “post and wire” birds by the roadside.

In 1968 and 1971 Breckenridge published two small articles commenting on the declining numbers of both the Eastern and Western Kingbirds (Breckenridge 1968, 1971). Using data he and Roberts collected in 1926 and comparing that to systematic surveys conducted in 1971, he found the Eastern Kingbird had been nearly 12 times more abundant in 1926; the Western Kingbird experienced similar declines. Breckenridge speculated that these aerial insectivores were impacted by the intensive use of pesticides in the agricultural regions of the state.

Although the Eastern Kingbird’s numbers were clearly declining, the species remained widely distributed throughout the state. When Green and Janssen (1975) and later Janssen (1987) wrote their updated accounts of the species’ distribution, both accounts noted that the bird was a statewide resident and could be found breeding in all regions of the state. Janssen included a statewide distribution map that identified 42 counties where nesting had been documented since 1970. More than a decade later, Hertzel and Janssen (1998) added 11 more counties to the list. Finally, years of extensive field work conducted by the Minnesota Biological Survey beginning in the late 1980s tallied more than one thousand Eastern Kingbird breeding season locations in all corners of the state (Minnesota Department of Natural Resources 2016).

During the course of the MNBBA, observers reported a total of 3,672 Eastern Kingbird records from 47.5% (2,274/4,791) of the surveyed atlas blocks and from 60.8% (1,422/2,337) of the priority blocks. Breeding evidence was reported in a total of 352 blocks (Figures 2 and 3; Table 1). The birds were observed in all of Minnesota’s 87 counties and were confirmed breeding in 75 counties (one block with confirmed breeding evidence straddled 2 counties, Renville and Redwood). A total of 28 of these counties were additions to the list published by Hertzel and Janssen in 1998. Although reports came from all regions of the state, the species was least abundant in northeastern Minnesota, east of St. Louis County, and in the very northern regions of north-central Minnesota.

MNBBA records were combined with data on climate, habitat availability and landscape context to predict the species’ statewide distribution. The resulting model predicted the species is least abundant in the Laurentian Mixed Forest Province, especially in the Arrowhead Region, and in metropolitan regions such as the Twin Cities and Rochester (Figure 4). Predicted breeding densities throughout western and southern Minnesota are quite uniform with no areas of significantly higher abundance.

Since Hatch (1892) first wrote his account of the Eastern Kingbird nearly 150 years ago, the species’ widespread distribution throughout the state has remained unchanged, despite an apparent decline in overall abundance. The same is true across North America. Although the loss of extensive forest habitat and the planting of trees in the Great Plains likely provided some benefits to the species, no significant changes to its distribution have been noted, at least in the past 100 years (Murphy 1996). 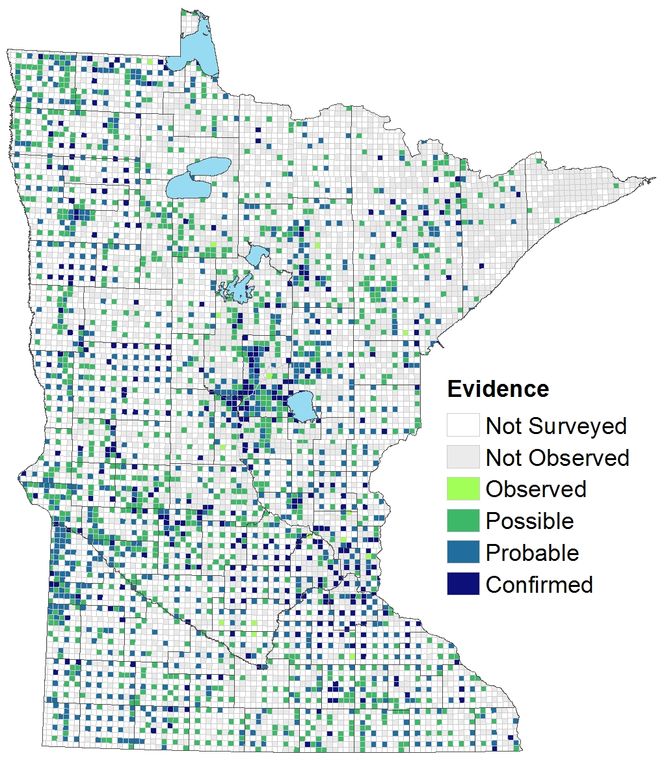 Breeding distribution of the Eastern Kingbird in Minnesota based on the Breeding Bird Atlas (2009 – 2013).

Summary statistics of observations by breeding status category for the Eastern Kingbird in Minnesota based on all blocks (each 5 km x 5 km) surveyed during the Breeding Bird Atlas (2009-2013).

Summary statistics for the Eastern Kingbird observations by breeding status category for all blocks and priority blocks (each 5 km x 5 km) surveyed during the Minnesota Breeding Bird Atlas (2009-2013). 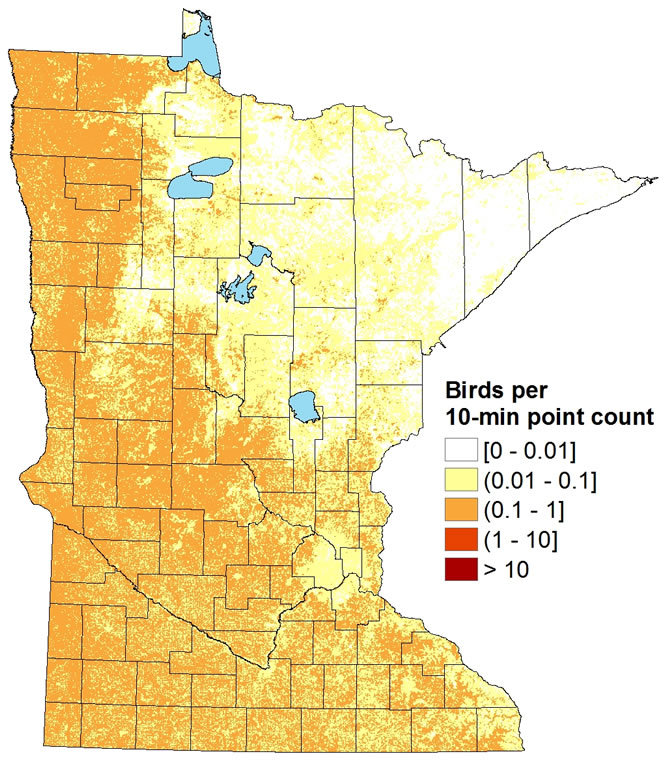 Predicted breeding distribution (birds detected per 10-minute point count) of the Eastern Kingbird in Minnesota based on habitat, landscape context, and climate data gathered during the Minnesota Breeding Bird Atlas (2009-2013) using the General Linear Modeling method without an adjustment for detectability.

Some field studies have noted the species’ affinity for sites associated with water and have reported high nesting densities in trees along the water’s edge or in dead snags surrounded by water (Murphy 1996). The National Forest Bird (NFB) monitoring program in northern Minnesota also documented the kingbird’s strong association with water in both the Superior and Chippewa National Forests (Niemi et al. 2016). Murphy (1996) suggested that in presettlement times the kingbird may have been restricted to wetland habitats, such as marshes and the riparian edges of lakes and rivers, and to open, disturbed habitats, such as forest burns and large blowdowns.

A profile of the kingbird’s habitat preferences at point counts conducted by the MNBBA is shown in Figure 6. Statewide, the species was most strongly associated with upland grasslands, followed by croplands, marshes and wet meadows, and developed areas where parklands often provide open, savanna-like habitat. 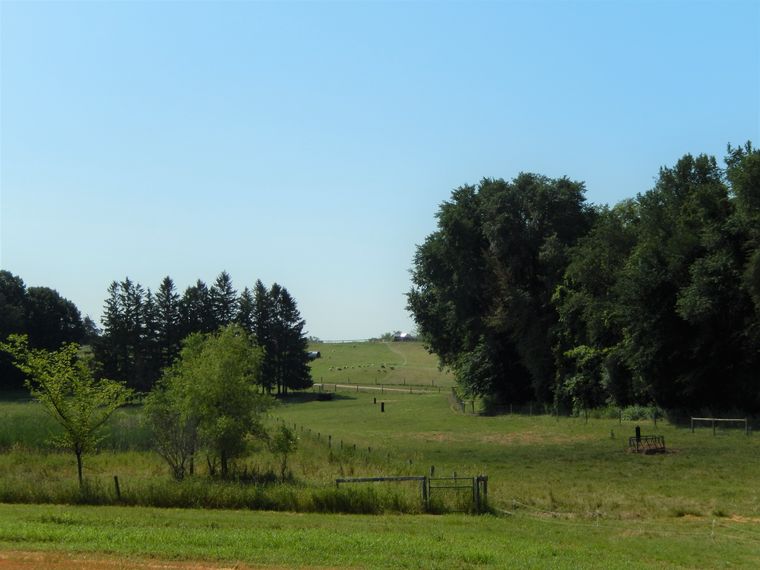 Typical breeding habitat of the Eastern Kingbird in Minnesota (© Lee A. Pfannmuller).

Habitat profile for the Eastern Kingbird based on habitats within 200 m of point counts where the species was present during the Minnesota Breeding Bird Atlas (2009-2013).

Although it is a common species in Minnesota, the core of the kingbird’s breeding range is found further west in the Prairie Pothole Region and in the Central Mixed Grass Prairie just to the south (Figure 1). Here, the average number of birds seen per BBS route is approximately 12 to 13 birds each year. The highest number seen is nearly 22 in North Dakota. This compares to an annual average of 3 to 4 birds per BBS route in Minnesota (Sauer et al. 2017).

At the local level, breeding densities vary widely across the species’ range and have been reported as low as 0.3 birds per 40 ha to as high as 33 birds per 40 ha (Murphy 1996). A study of breeding birds on Conservation Reserve Program (CRP) lands in western Minnesota found an average of 2.2 birds per 40 ha (Hanowski 1995). In the forested landscape of northern Minnesota, where the kingbird is considerably less abundant, an average of 0.23 kingbirds were found on 100-10 minute unlimited distance point counts in the Superior National Forest and 0.94 kingbirds in the Chippewa National Forest. This compares to an average of nearly 140 to 220 Red-eyed Vireos and Ovenbirds, the most abundant species in both national forests (Niemi et al. 2016).

Despite their overall abundance, the Eastern Kingbird has been declining throughout most of its range since the BBS began in 1966. Across the BBS survey area, the species has shown a significant, steady decline averaging 1.28% per year (Sauer et al. 2017). This results in a cumulative loss of 38% (Rosenberg et al. 2016). No ecological region, province, or state has shown a significant increase in the population of the Eastern Kingbird since 1966, including Minnesota, where it has declined an average of 1.78% per year since 1967 (Figure 7). Only in the last few years does the statewide decline show some hint of leveling off.

Factors responsible for the species’ decline have not been investigated. Potential causes include: 1) habitat loss and degradation, 2) collisions with automobiles because the bird often nests and forages close to roads, and 3) pesticide use, given its prevalence in agricultural lands and orchards. Unfortunately, even though Breckenridge (1968) mentioned pesticides as a potential contributor to the species’ decline more than 50 years ago, few studies have closely examined their impact on local or regional populations. Some have suggested that population declines in the eastern United States may be the result of forest regeneration as abandoned farmlands succeed to forested habitats (Murphy 1996). A study in New York examined the potential causes of the local declines observed in Charlotte Valley, in the southeastern region of the state. Although the investigator could not dismiss the potential impacts of a decline in adult survival, the impact of forest regeneration was dismissed as a contributing factor. The total amount of forest cover had changed insignificantly during the period of study. On the other hand, the percentage of the population’s decline was nearly identical to the decline in the percentage of cropland used only for pasture or grazing (Murphy 2001). 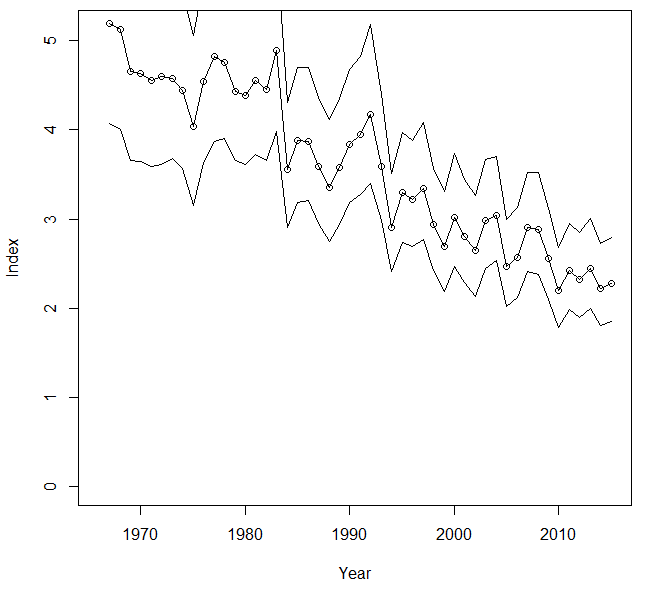 Breeding population trend for the Eastern Kingbird in Minnesota for 1967–2015 based on the federal Breeding Bird Survey (Sauer et al. 2017).

Although the decline in its population is cause for concern, the Eastern Kingbird’s wide breeding distribution, its relatively large population size, and the absence of immediate and overriding threats to its breeding and wintering habitats, led to a moderate Continental Concern Score of 11/20 (Rosenberg et al. 2016). The species is not state-listed, nor is listed as a Species of Greatest Conservation Need in Minnesota.

The 2010 State of the Birds report assessed the species as having a moderate or medium vulnerability to warming temperatures (North American Bird Conservation Initiative 2010), but more intensive analyses have not been conducted.

Targeted recommendations for managing kingbird populations and their habitats are limited. Based on his study of the Eastern Kingbird in New York, Murphy (2001) suggested that the protection of riparian habitats was a high priority because these were the only habitats where local populations were not declining. Although kingbird populations did not fare as well in old fields and farmsteads, these sites supported the highest breeding densities of the species (Murphy 2001). In addition to protecting riparian zones, he argued, land preservation efforts to protect small farms and open spaces are critical to prevent further decline of this emblematic open-country species.