A regular breeding resident and migrant; occasionally overwinters. The Eastern Towhee was an uncommon species during the Minnesota Breeding Bird Atlas (MNBBA).

The Eastern Towhee is broadly distributed across the eastern United States, extending north into Canada but limited to the southern regions of the eastern provinces. It is a summer resident in the northern states but a permanent resident further south. Eastern Towhees reach their highest breeding densities in the southeastern United States, extending north into the southern Appalachians (Figure 1).

Assigned a Continental Concern Score of 11/20 by Partners in Flight; designated a Species in Greatest Conservation Need by the Minnesota Department of Natural Resources.

A short-distance migrant that winters in the southeastern United States. In recent years, an increasing number of birds have lingered in the northern states into the winter months, some remaining the entire winter at feeding stations or in habitats that provide adequate food resources.

An open-cup nest placed on the ground, nestled within the ground litter and often located under a small shrub; occasionally it is placed within a low bush or in a tangle of vegetation less than 2 m from the ground. 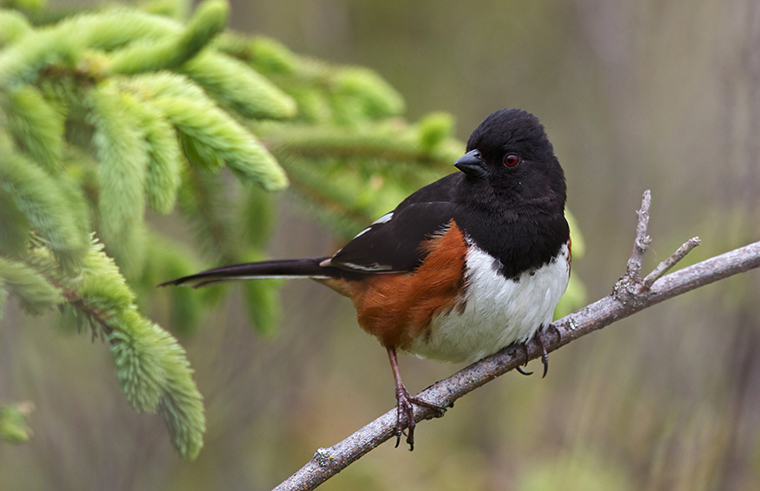 Breeding distribution and relative abundance of the Eastern Towhee in North America based on the federal Breeding Bird Survey, 2011–2015 (Sauer et al. 2017).

A bird with many identities, the Eastern Towhee was known as the Red-eyed Towhee in the early twentieth century and the Rufous-sided Towhee until 1995. Biologists then separated the western form of the species, the Spotted Towhee, into a distinct species. Other common names included Ground Robin, in reference to its ground-nesting and ground-foraging habits, and Chewink, a phonetic interpretation of its distinctive call note. Roberts (1932) knew the bird as the Red-eyed Towhee and described it as a statewide summer resident. Nesting was confirmed (nests with eggs) in 6 counties that stretched from Wabasha County in the southeast north to Hennepin, Ramsey, and Sherburne Counties and then north to Crow Wing and Marshall Counties. A nest with eggs was also reported at Cass Lake and nesting was inferred (young out of nest and adult carrying food) in Itasca County, Itasca State Park, and in the vicinity of Lake Mille Lacs. There also were summer reports of the birds in Aitkin County (1930) and along the Canadian border.

By the late 1920s, Roberts noted a significant decline in the statewide population. “The Towhee was formerly an abundant bird in all suitable places but has decreased greatly in numbers in recent years and is now common only locally.” He attributed the decline, in part, to increasing development but believed it didn’t fully account for the decrease he was observing. Plenty of suitable habitat still appeared to be available. Because it is a ground-nesting bird, Roberts lamented that “many stray cats and dogs, the inevitable accompaniment of civilization, may be a factor in the partial disappearance of this and other ground-nesting birds.”

Accounts written by both Green and Janssen (1975) and Janssen (1987) reflect nearly an identical statewide distribution as that delineated by the nesting records enumerated by Roberts in the early 1900s. The Eastern Towhee remained largely absent from northeastern Minnesota and the entire western region of the state. Janssen’s distribution map identified only 4 counties where nesting had been confirmed since 1970: Anoka, Dakota, Hubbard, and Washington. Hertzel and Janssen (1998) later added four more counties to the list: Brown, Crow Wing, Houston, and Scott.

By the time the Minnesota Biological Survey (MBS) was underway in the late 1980s, the towhee’s distribution had made some notable changes. Reporting a total of 280 breeding season locations, the MBS uncovered numerous records within the Minnesota River valley as far west as Yellow Medicine County and several reports in the Prairie Coteau region of southwestern Minnesota. Numerous records also were documented in the Tallgrass Aspen Parklands Province in far northwestern Minnesota (Minnesota Department of Natural Resources 2016).

MNBBA participants reported 485 Eastern Towhee detections in 5.5% (260/4,737) of the surveyed atlas blocks and in 7.1% (167/2,337) of the priority blocks. Breeding evidence was documented in 14 blocks (Figures 2 and 3; Table 1). The towhee was reported in 55 of Minnesota’s 87 counties (numerous blocks in the upper Minnesota River valley straddled counties on both sides of the river) and were documented breeding in 11 counties. Of the list published by Hertzel and Janssen in 1998, 6 counties were additions: Becker, Goodhue, Le Sueur, Nicollet, Sherburne, and Wabasha (1 confirmed breeding block straddled Nicollet and Le Sueur Counties).

The towhee’s MNBBA distribution was quite similar to that documented by the MBS, with the addition of numerous records in east-central Minnesota (Chisago, Isanti, Kanabec, and Ramsey Counties), the Twin Cities metropolitan region, and in west-central Minnesota (Kandiyohi, Meeker, and Pope Counties). Records were even found as far north as Lake of the Woods County.

Although the towhee may have been very common in Aitkin County in the 1930s, it was rare to absent throughout much of northeastern Minnesota and the north-central counties of Koochiching and Itasca. Formerly considered absent in the southwest and west-central regions, scattered records are now present from all but the most intensively cultivated regions of south-central Minnesota and the Red River valley. In Wisconsin, the Eastern Towhee also was considered an abundant species in the early 1900s. Although still widespread, Robbins (1991) reported that it remained abundant only in a few localities (Cutright et al. 2006). In Michigan, however, its breeding distribution has changed little since the early 1900s (Chartier et al. 2013). Local changes elsewhere throughout the species’ range are largely attributed to landscape changes, primarily the loss of the towhee’s preferred shrub habitat to development and agriculture. 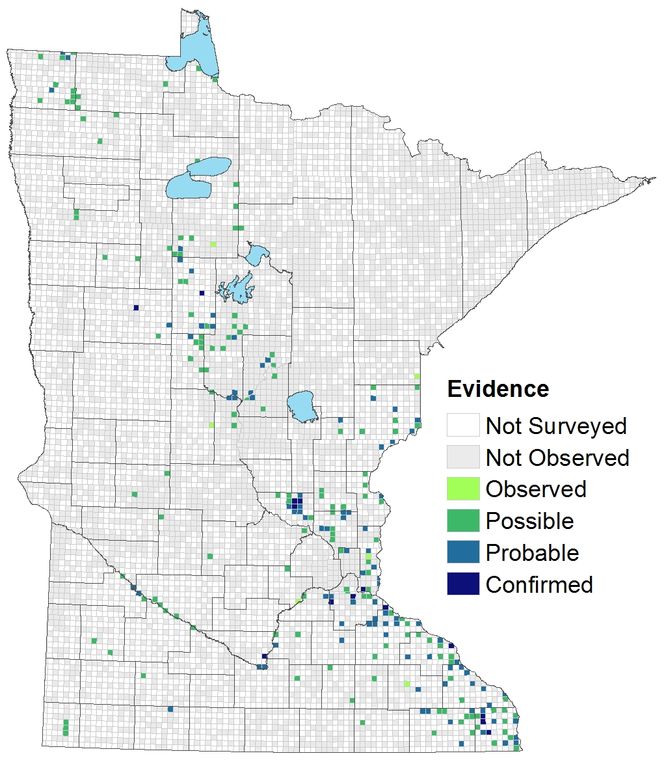 Breeding distribution of the Eastern Towhee in Minnesota based on the Breeding Bird Atlas (2009 – 2013).

Summary statistics of observations by breeding status category for the Eastern Towhee in Minnesota based on all blocks (each 5 km x 5 km) surveyed during the Breeding Bird Atlas (2009-2013).

Summary statistics for the Eastern Towhee observations by breeding status category for all blocks and priority blocks (each 5 km x 5 km) surveyed during the Minnesota Breeding Bird Atlas (2009-2013).

The Eastern Towhee is often characterized as an edge specialist. Breeding territories are usually located in old fields, shrubby thickets, brushy forest edges, and in open woodlands, including young successional forests (Figure 4). The sites are typically dry or mesic with a well-developed litter layer that is used for both nesting and foraging (Danz et al. 2007; Greenlaw 2015). Kahl et al. (1985) found that the most important features common to all habitats used were a litter layer that averaged 1.0–3.0 cm deep and brushy cover (70%–90%). Studies also have shown a direct negative correlation between towhee abundance and the percentage of forest canopy cover (Robbins et al. 1989). 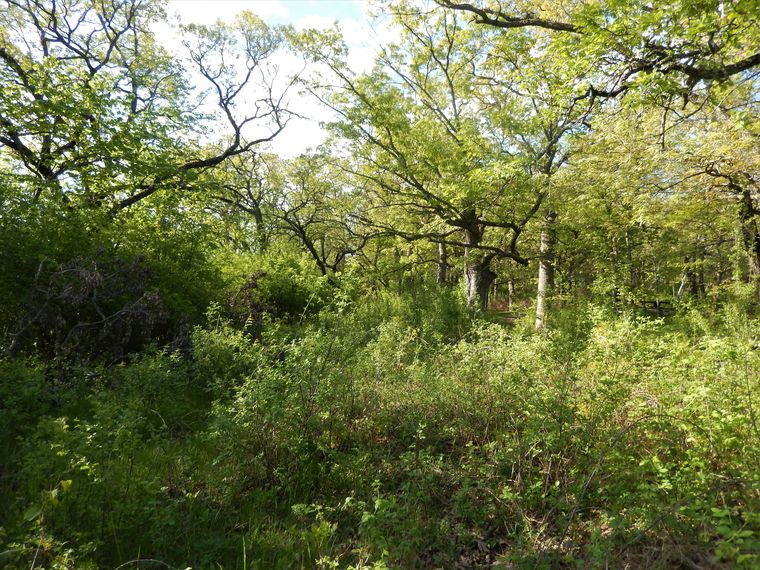 Typical breeding habitat of the Eastern Towhee in Minnesota (© Lee A. Pfannmuller).

Habitat profile for the Eastern Towhee based on habitats within 200 m of point counts where the species was present during the Minnesota Breeding Bird Atlas (2009-2013).

Minnesota is near the northern periphery of the towhee’s North American breeding range, and its breeding densities in the state are relatively low compared with states farther south. An average of less than 1 bird is detected per BBS route in the state each year. In the heart of the species’ range in Alabama, Florida, Georgia, and Mississippi, the average ranges from 22 to 43 birds per route (Sauer et al. 2017). Locally, breeding densities can be as high as 30–50 pairs per 40 ha, even reaching 80 pairs per 40 ha. Densities are usually highest in northeastern pine barrens and in pinelands and scrub oak habitats in the southeastern United States (Greenlaw 2015). In the Chippewa National Forest in north-central Minnesota, its breeding density was approximately 0.04 pairs per 40 ha; in its favored open, dry habitat, breeding density was approximately 0.38 pairs per 40 ha (Niemi et al. 2016).

Since the BBS began in 1966, the Eastern Towhee population has demonstrated a significant population decline across its breeding range, declining an average of 1.34% per year (Figure 6). From 1970–2014, biologists estimated the species experienced a cumulative decline of 43% (Rosenberg et al. 2016). Because the species is so uncommon along BBS routes in Minnesota, statistical analyses of trends lack precision. Nevertheless, BBS data suggest a slowly declining population (Sauer et al. 2017). NFB program data collected in the Chippewa National Forest also show a nonsignificant but slowly declining population (Figure 7).

The Eastern Towhee’s population decline is unusual among short-distance migrants. Large declines are often associated with long-distance, Neotropical migrants and with species dependent on large, unbroken tracts of forest. In a study on Eastern Towhees published in 1993, the steepest population declines were found in states east of the Mississippi River, with the largest declines (>5% per year) found in New England (Hagan 1993; Figure 8). Twenty years later, in 2015, the scenario has remained the same. The average annual rate of decline in the states of Connecticut, New Hampshire, Maine, Massachusetts, and Vermont ranged from a low of 5.33% per year in Massachusetts to a high of 9.49% per year in New Hampshire.

After examining other sources of population data, including Christmas Bird Count data from the towhee’s wintering grounds, Hagan concluded that large-scale changes in the forest landscape were responsible for the species’ decline. Well-documented aging of New England forests, as agricultural fields were abandoned, has reduced the availability of early successional forests and shrub habitats, the towhee’s prime habitat. The declining trend that began in the mid-1900s continues today, as documented by the most recent BBS data. However, as Hagan points out, the abundance of the Eastern Towhee in New England in the 1800s and early 1900s may itself have been an artifact of changing landscapes. As the early settlers colonized the region’s mature forests, they created a more open landscape through logging, farming, and industrial and human development that likely favored towhees. Then, as agricultural lands were abandoned, the young successional forest created another increase in towhee numbers until the species once again declined as succesion proceeded to a closed-canopy, mature forest. 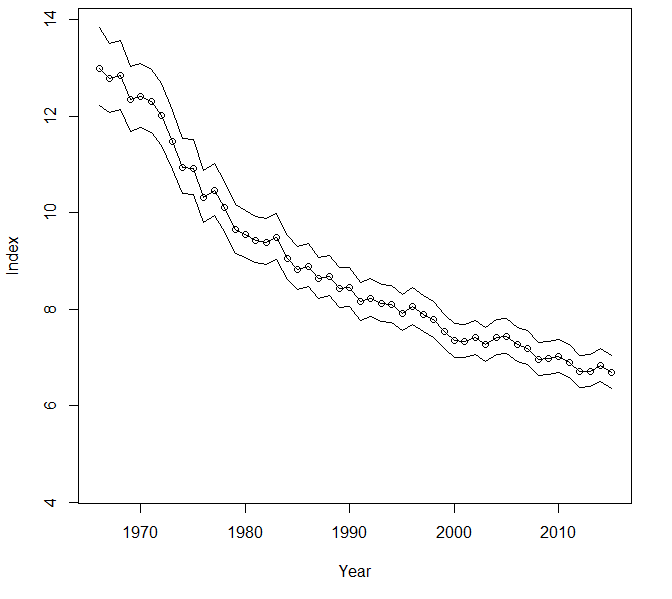 Breeding population trend for the Eastern Towhee in North America for 1966–2015 based on the federal Breeding Bird Survey (Sauer et al. 2017). 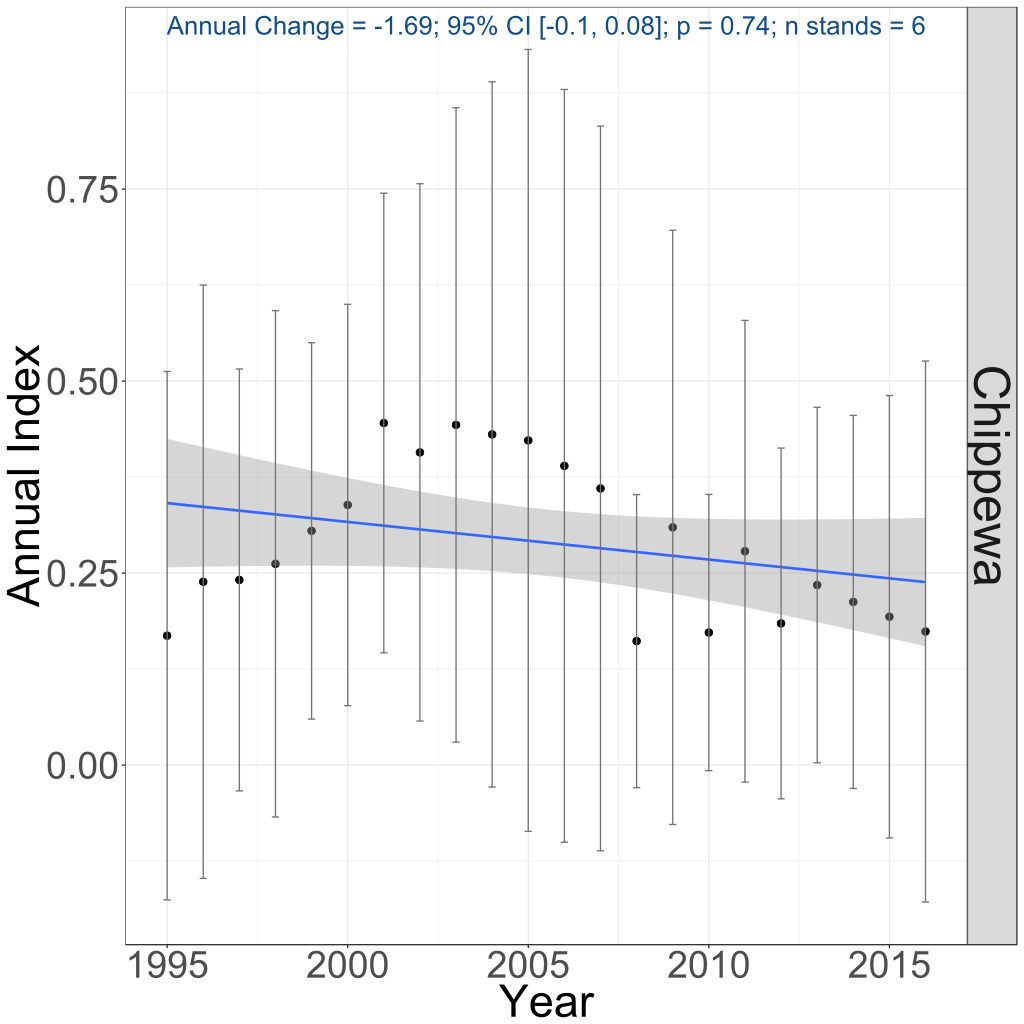 Population trend map for the Eastern Towhee for 1966–2015 based on the federal Breeding Bird Survey (Sauer et al. 2017).

The Eastern Towhee’s population decline was the most important factor influencing its Continental Concern Score of 11/20 assigned by Partners in Flight (Rosenberg et al. 2016). Its population decline also prompted its designation as a Species in Greatest Conservation Need by the Minnesota Department of Natural Resources (2015). Warming temperatures may not pose a threat to the species. An assessment by the North American Bird Conservation ranked its vulnerability to climate change as low (North American Bird Conservation Initiative 2010).

Overall, because the towhee remains a widespread species and is actually increasing in portions of its range, such as Iowa, Kansas, and Louisiana (Sauer et al. 2017), focused management efforts and conservation measures have not been developed. A habitat generalist, dependent on shrubby woodlands and forest edges, the species will benefit from efforts to retain the natural range of variability in forest cover composition and age. This approach to forest management will ensure the presence of some young, shrubby forests throughout the most extensively forested regions of the state.