Originally native to Eurasia, the Eurasian Collared-Dove is a recently introduced exotic species in North America. In Minnesota it is a regular breeding resident and winter resident primarily in southern and western Minnesota, although its range is continuing to expand northward. The Eurasian Collared-Dove was an uncommon species during the Minnesota Breeding Bird Atlas (MNBBA).

Broadly distributed across the western, central, and southern United States, the Eurasian Collared-Dove is largely absent from the Great Lakes region, New England, and the mid-Atlantic and north-central states, south to the coast of North Carolina and west to Indiana. The dove is most abundant in the Central Plains; scattered pockets of high breeding densities are found in southern California, northwestern Texas, and western Nebraska (Figure 1).

As an introduced species, the Eurasian Collared-Dove is not a conservation concern in Minnesota.  Its impact on native species, as populations continue to expand, remains uncertain.

A ground forager that feeds primarily on seeds as well as some insects and berries.

A stick platform usually placed within a tree or shrub but sometimes found on man-made structures. 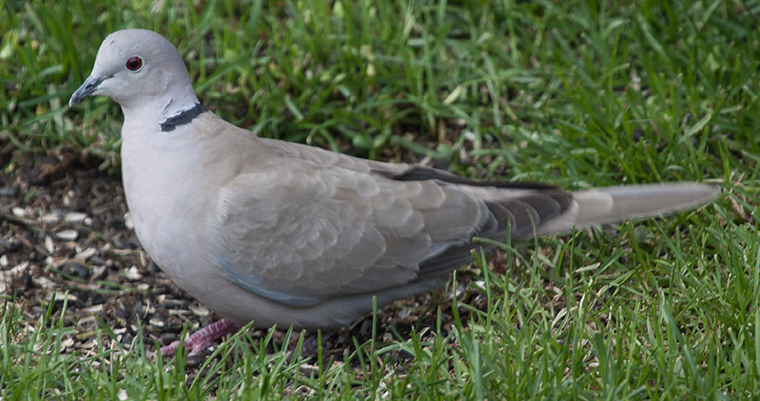 Breeding distribution and relative abundance of the Eurasian Collared-Dove in North America based on the federal Breeding Bird Survey from 2011 to 2015 (Sauer et al. 2017).

An Old World species, the Eurasian Collared-Dove made its first appearance in the United States in Florida in 1986 (Smith and Kale 1986). It was only 12 years later when the first bird was observed in Minnesota, in the spring of 1998 in Big Stone County (Eckert 1998). During the next 2 years, confirmed and well-documented reports were submitted from other southwestern counties, including Lyon, Martin, Mower, Pipestone, and Rock, as well as one record farther north, in Kandiyohi County (Svingen and Kinstler 2002). Several of the reports were of multiple birds (2–4). Then in 2001, the first documented nesting report came from a municipal park in the town of Caledonia in Houston County (Svingen and Kinstler 2002). That same year, 1 bird was reported as far north as Roseau County. Enough reports continued to accumulate over the next few years that in 2004 the official Records Committee of the Minnesota Ornithologists’ Union changed the statewide status of the Eurasian Collared-Dove from Accidental to Regular (Eckert 2004).

The MNBBA documented 133 Eurasian Collared-Dove records in 2.1% (99/4,751) of the atlas blocks that were sampled and in 2.5% (58/2,337) of the priority blocks. Breeding was confirmed in 11 blocks (Figures 2 and 3; Table 1). The species was most abundant in the southern half of the state, with scattered records as far north as Polk County in the northwest and Itasca County in the northeast.

The story of the Eurasian-Collared Dove is an all too familiar account of the introduction of an exotic species. Oftentimes our knowledge of how a species was introduced is sketchy and speculative. But in the case of the Collared-Dove, a very detailed account was documented by P. William Smith in 1987. The original stock was acquired by a pet store owner in the Bahamas. Interested in acquiring Ringed Turtle-Doves, he instead received an allotment of Eurasian Collared-Doves, known in Europe as Indian Ring-necks.

Unfortunately, in 1974, a few years after receiving his new acquisition, the Bahama breeder’s aviary was burglarized, and several doves escaped. The owner decided to simply release the remaining birds and abandon his original plans to establish a local breeding stock for his pet shop. The number of doves released is unknown but likely was less than 50.

Smith (1987) believed these released birds were the main source of the current North American population. Following their arrival in Florida, the dove’s range rapidly expanded across the United States. Figures 4 and 5 illustrate how the species’ distribution has changed in the past 30 years; Figure 4 illustrates eBird data compiled from 1986, when the species was first documented in Florida, to the year 2000; Figure 5 illustrates eBird data compiled from 2001 to 2016 (eBird 2016). Clearly the species rapidly expanded northward in just 15 years; reports were even documented as far north as southern Alaska. Dispersal to the northwest is characteristic of the species’ general movements. Although most of the expansion is presumed to have originated from wild birds dispersing northward from Florida, some caged birds also have been released in other localities. 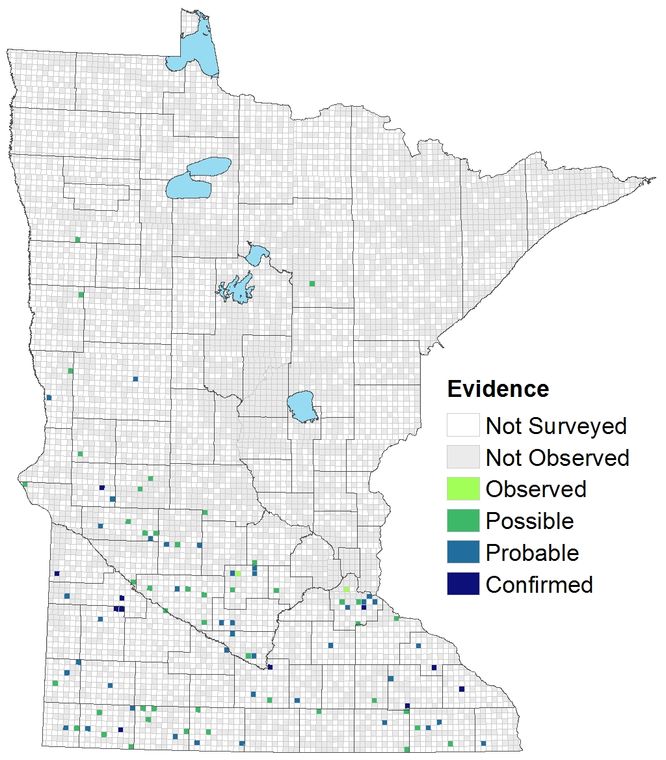 Breeding distribution of the Eurasian Collared-Dove in Minnesota based on the Breeding Bird Atlas (2009 – 2013).

Summary statistics of observations by breeding status category for the Eurasian Collared-Dove in Minnesota based on all blocks (each 5 km x 5 km) surveyed during the Breeding Bird Atlas (2009-2013).

Summary statistics for the Eurasian Collared-Dove observations by breeding status category for all blocks and priority blocks (each 5 km x 5 km) surveyed during the Minnesota Breeding Bird Atlas (2009-2013). 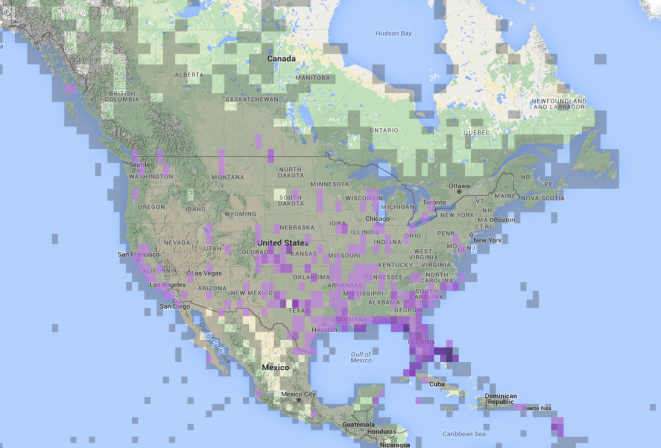 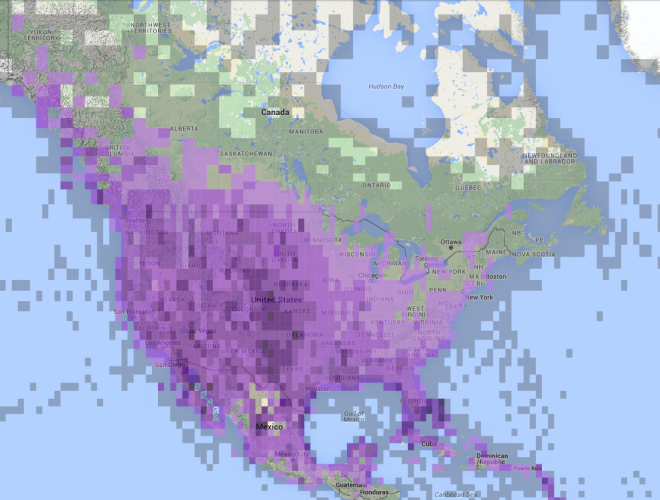 The primary requirements of the Eurasian Collared-Dove’s habitat are trees, open ground, and available sources of grain. As a result, birds are found in a variety of habitats that meet these criteria including city parks, residential areas, farmsteads, and large grain storage facilities (Figure 6). Heavily forested areas are usually avoided. 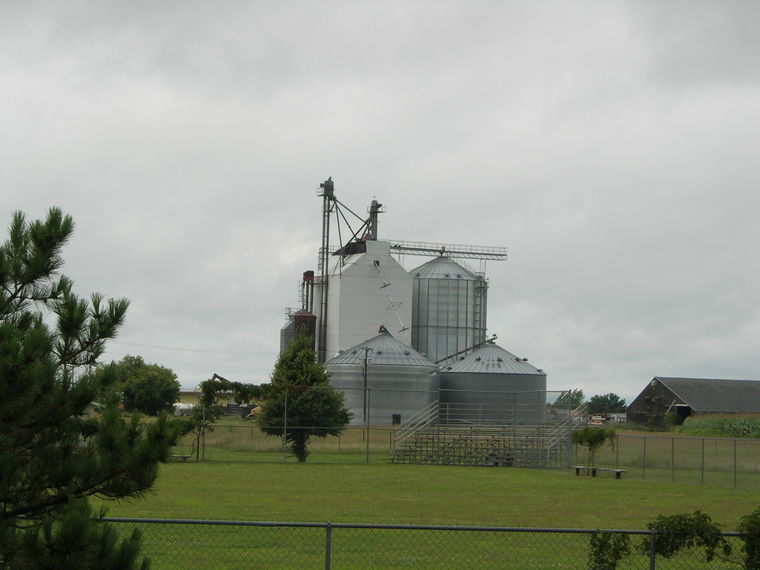 Although Eurasian Collared-Doves, like all land birds, are monitored by the federal Breeding Bird Survey (BBS), their appearance in the United States is too recent and their range expansion too rapid to accurately assess the size of their current population. In 2013, Partners in Flight estimated the global population to approximate 8 million birds, 5% (400,000) of which were estimated to occur in the United States (Partners in Flight Science Committee 2013). That number has undoubtedly grown in the past several years. The BBS sample size is still too small to conduct a robust statistical assessment of population trends. Nevertheless, the rapid growth of the U.S. population is clearly evident in the limited data that are available (Sauer et al. 2017).

In Minnesota, 9 years passed between the dove’s first appearance in the state in 1998 and the year the species was first detected along a BBS route. The first record was along a route that straddles Stearns and Kandiyohi Counties in central Minnesota in 2007 (BBS route #64). Five years later, in 2012, 1 bird was reported; 2 were reported in 2013; 8 in 2014, and 4 in 2015. The BBS records span a relatively large region stretching from Martin County in south-central Minnesota, north to Norman County in northwestern Minnesota (Sauer et al. 2017). Despite the dove’s rapid range expansion, it remains a very uncommon bird on the northern periphery of its range in Minnesota.

The number of MNBBA records gathered for the Eurasian Collared-Dove suggests that Minnesota’s population numbers at least a couple hundred birds. Across North America the highest breeding densities are encountered farther south and west, with particularly high numbers in western Nebraska and western Texas (Figure 1).

As an introduced, nonnative species, the Eurasian Collared-Dove is not a protected species. Indeed, it has become a popular species to hunt in some regions of the southern United States, where population numbers are the highest. Warming temperatures certainly do not pose a threat to this rapidly expanding species.

There is some concern the species might become so abundant that it will become the equivalent of the “gray starling,” competing for available resources with other native North American birds (Smith 1987). Some have speculated, for example, that the bird’s larger size would place the smaller-sized Mourning Dove at a competitive disadvantage, particularly relative to food competition. A recent study (Poling and Hayslette 2006) suggested, however, that Collared-Doves were not more aggressive or competitive than Mourning Doves in experimental trials. Regardless, more study is needed.

The real impact of the Eurasian Collared-Dove invasion is unknown at this early stage. In the interim, populations of doves native to North America should be closely monitored.