A regular breeding resident, erratic migrant, and winter visitant in Minnesota. The species was uncommon during the Minnesota Breeding Bird Atlas (MNBBA).

Patchily distributed in the Upper Midwest and in the northeastern and northwestern United States and Canada; extensions southward into northern California and the Rocky Mountains to Arizona and New Mexico. Highest breeding densities are in the Northwest, including British Columbia and Washington State (Figure 1).

Assigned a Continental Concern Score of 13/20 by Partners in Flight; designated a Species in Greatest Conservation Need by the Minnesota Department of Natural Resources.

Invertebrates, including beetles, caterpillars such as spruce budworm, spiders, and aphids; also seeds and fruits of many trees (especially box elder), shrubs, and forbs, and commonly sunflower seeds at feeders. 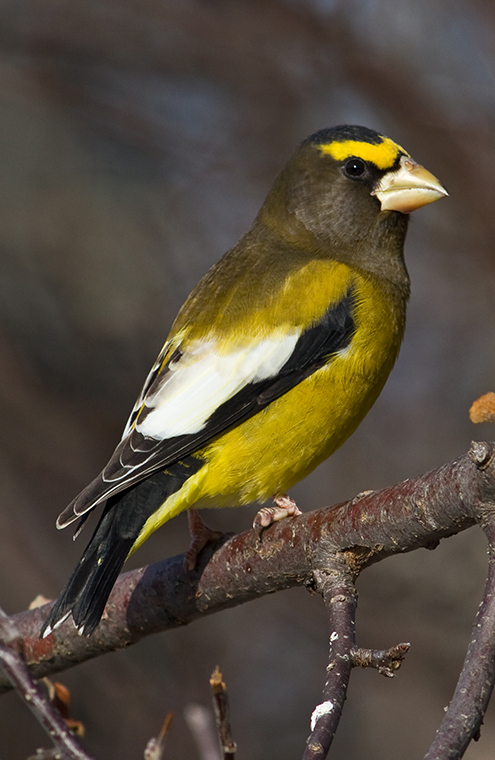 Breeding distribution and relative abundance of the Evening Grosbeak in North America based on the federal Breeding Bird Survey, 2011–2015 (Sauer et al. 2017).

The Evening Grosbeak was described by Roberts (1932) as an enigmatic species that is “present throughout the year in the evergreen forests of Minnesota, most commonly and apparently regularly from Itasca and Koochiching counties eastward into Lake and Cook counties.” He further pronounced it as “by no means evenly distributed throughout the area, occurring, usually a number together at widely separated localities.”

Roberts reported that no nests had been found, but he cited evidence of adults feeding young, observations of mated pairs, and birds captured with distinctive incubation patches. These observations ranged from June to August from 1900 to 1928 in Aitkin, Cook, Itasca, and Koochiching Counties.

More than 40 years later, Green and Janssen (1975) emphasized that the Evening Grosbeak was a resident in the northeastern and north-central regions of Minnesota. They stated it was formerly “present only sparingly in the coniferous forest” but more numerous during the past 20 years. They also suggested evidence that its breeding range was expanding south and west in Minnesota, to where nesting was confirmed in Cass, Clearwater, and Crow Wing Counties, and to St. Louis County. Inferred nesting was included for Beltrami, Carlton, Cook, and Lake Counties.

Janssen in 1987 reinforced the range expansion of the Evening Grosbeak even farther westward in Minnesota. His breeding range map included its summer distribution reaching to eastern Becker County. Janssen updated confirmed nesting since 1970 and included 7 counties: Aitkin, Becker, Clearwater, Crow Wing, Hubbard, Itasca, and St. Louis. By 1998, Hertzel and Janssen had not added any new confirmed county nesting records since 1970.

The MNBBA participants reported 247 records, which were strongly associated with the Laurentian Mixed Forest Province, especially in northeastern Minnesota (Figure 2). A total of 165 blocks, or 3.5% of all blocks (165/4,734), included breeding records. Nesting was confirmed in 10 blocks, largely confined to Lake and St. Louis Counties, with 1 in Roseau County (Figure 3; Table 1). Probable and possible nesting behavior was also recorded in many northern counties of the state, most of which have been mentioned previously. Two exceptions were single observations of possible nesting in Koochiching and Lake of the Woods Counties in the extreme northern portions of Minnesota. In general, both of these counties receive scant coverage.

The lack of MNBBA records from the north-central counties, such as Becker, Cass, Clearwater, and Crow Wing, that were listed by Janssen (1987) and the MBS is symptomatic of the population decline and range retractions in North America over the past 20 years (Ralston et al. 2015; Niemi et al. 2016). In their review of the Evening Grosbeak in North America, Gillihan and Byers (2001) describe the dynamic changes that have occurred in the distribution of this species in North America since the mid-1800s. Briefly, Evening Grosbeaks were a common species in the Rocky Mountains and western Canada until the mid-1800s and were considered rare east of the Rockies. They reported that minor irruptions began to occur in the 1850s in the Great Lakes, and major irruptions began to occur in the 1880s in eastern Canada and the northeastern states. The irruption in 1889–1890 was particularly intense. The frequency and number of birds in irruptions began to increase in the early 1900s, which corresponded with the increase in breeding observations in Minnesota reported by Roberts.

As noted earlier, the first potential nesting observations were made by Roberts in the early 1900s. The first observation of adults with young in Wisconsin was not noted until the 1920s, and the first nest was found in 1964 (Robbins 1991). In Ontario, the first nest was not noted until 1944 (Cadman et al. 1987). All of these data appear to support the more “recent” arrival of this species to eastern North America.

This supposition has been questioned by Erickson (2015), who along with Brewer et al. (1991) noted that the type specimen of the Evening Grosbeak was collected in Sault Ste. Marie, Michigan, in April 1823. Erickson also pointed out that in 1940 James Bailley documented summer records of Evening Grosbeaks that formed an almost continuous belt from southeastern Manitoba to eastern Ontario. She also noted that the Ojibwe have a special name for the species, which implies they have possibly known the species for a considerable period.

Gillihan and Byers (2001) documented that the first breeding records in the New England region began to occur in the 1920s: 1926 in Vermont, 1937 in Massachusetts, 1946 in New York, 1962 in New Jersey, and 1983 in Connecticut. The number of wintering birds appeared to peak somewhere between the 1940s and the mid-1980s but has declined drastically since the mid-1980s. The increases in the Midwest and East have been attributed to the widespread planting of box elder trees as windbreaks and ornamentals, making their seeds available for consumption by grosbeaks throughout the winter. Note that even though irruptions continued to occur in the species’ western range, there was no similar expansion of its breeding range. 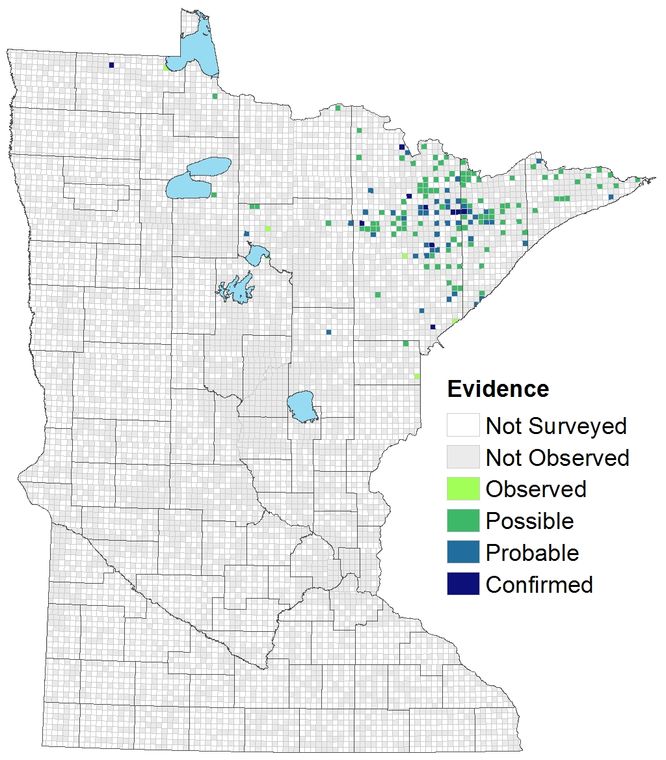 Breeding distribution of the Evening Grosbeak in Minnesota based on the Breeding Bird Atlas (2009 – 2013).

Summary statistics of observations by breeding status category for the Evening Grosbeak in Minnesota based on all blocks (each 5 km x 5 km) surveyed during the Breeding Bird Atlas (2009-2013).

Summary statistics for the Evening Grosbeak observations by breeding status category for all blocks and priority blocks (each 5 km x 5 km) surveyed during the Minnesota Breeding Bird Atlas (2009-2013). 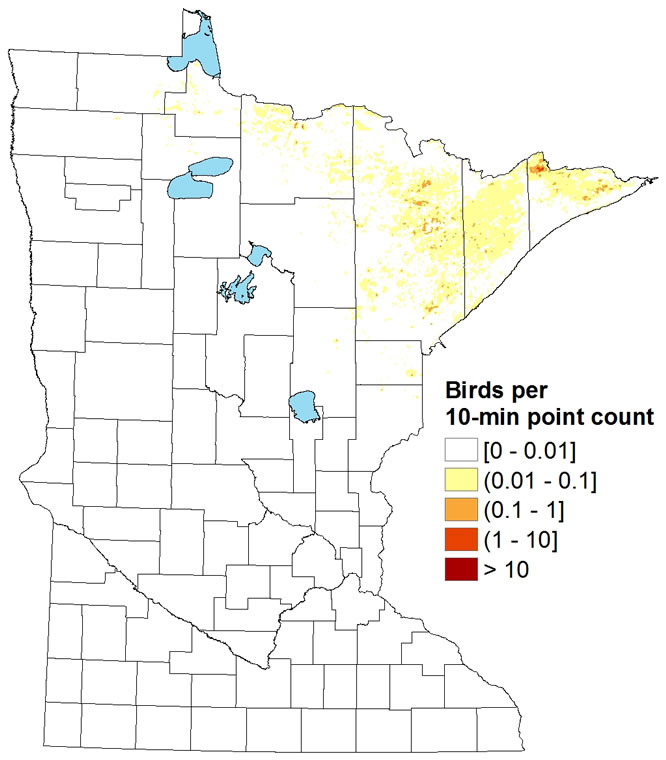 Predicted breeding distribution (birds detected per 10-minute point count) of the Evening Grosbeak in Minnesota based on habitat, landscape context, and climate data gathered during the Minnesota Breeding Bird Atlas (2009-2013) using the General Linear Modeling method without an adjustment for detectability.

Roberts (1932) stated that the Evening Grosbeak “has been found in the nesting season in Minnesota only in the vicinity of dense spruce and arbor vitae swamps.” Gillahan and Byers (2001) found that Evening Grosbeaks use coniferous forests and mixed coniferous-deciduous forests, while Takekawa and Garton (1984) emphasized their use of forests affected by spruce budworm, noting their economic value in these forests deriving from their insectivory.

Green (1995) suggested that the species is conifer dependent but also has a food preference for ash (Fraxinus spp.). The National Forest Bird (NFB) Monitoring Program found that most breeding observations from May to early July included the use of many habitat types, but that the birds were most frequently in coniferous cover types, such as jack, red, and white pine, and mixed aspen-spruce-fir (Figure 5). There were also extensive observations in towns (Niemi et al. 2016). The latter may partly reflect post-breeding movements during summer into areas with suitable food sources. 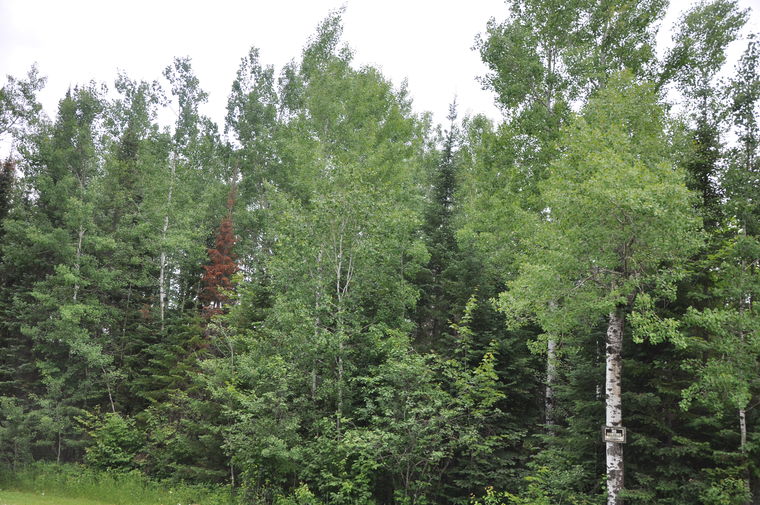 Habitat profile for the Evening Grosbeak based on habitats within 200 m of point counts where the species was present during the Minnesota Breeding Bird Atlas (2009-2013).

The Partners in Flight program estimated a North American population of 3.4 million breeding adults (Rosenberg et al. 2016). Similarly, Environment Canada (2011) estimated the adult population between 500,000 and 5 million adults. The species was not abundant enough and was too variable to estimate its population size in Minnesota from the MNBBA.

Bonter and Harvey (2008) provided one of the few analyses of changes in winter populations for the Evening Grosbeak. They reported from Project FeederWatch (http://feederwatch.org/) that the proportion of feeders reporting the species as present has declined by 50% and mean flock sizes have declined by 27% from 1988 to 2006.

NFB Monitoring Program counts from 1995 to 2016 in the Superior National Forest also showed a decline, but it is not significant, primarily because the species is highly variable (Figure 9). There are no reliable population estimates within habitats, but the NFB Monitoring Program estimated an overall mean detection for the species in the Chippewa and Superior National Forests as 2.0 and 5.7 per 100-10 minute unlimited distance point counts, respectively. 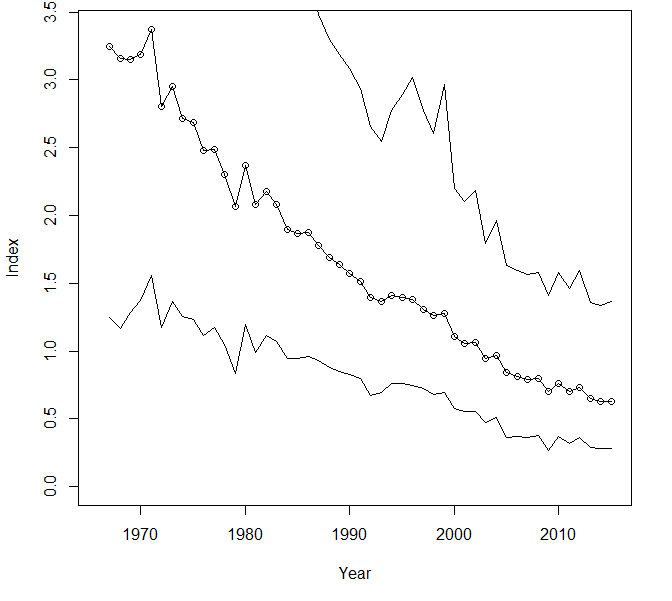 Breeding population trend for the Evening Grosbeak in Minnesota for 1967–2015 based on the federal Breeding Bird Survey (Sauer et al. 2017).

Population trend map for the Evening Grosbeak in North America for 1966–2015 based on the federal Breeding Bird Survey (Sauer et al. 2017). 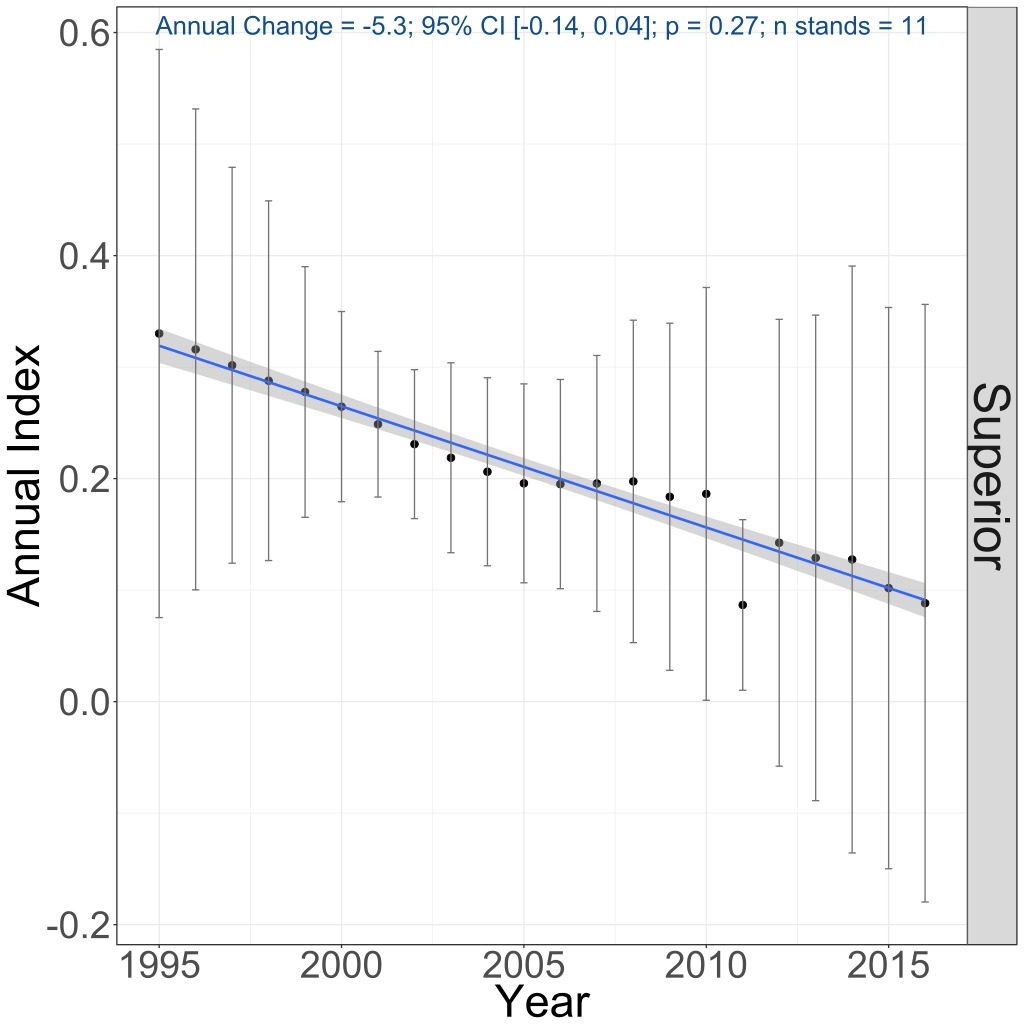 Based on the high-ranking Continental Concern Score of 13/20 assigned by Partners in Flight, the Evening Grosbeak is a species of conservation concern throughout North America (Rosenberg et al. 2016). It is also designated as a Species in Greatest Conservation Need in Minnesota. Both organizations emphasized that these concerns are related to the species’ drastic population declines over the past 30 years. Environment Canada (2011) acknowledged that reasons for its population decline are not well known but suggested multiple causes, such as large-scale forestry that has reduced the age structure of forests, diseases, and a reduced number of insect infestations (e.g., spruce budworm).

Bonter and Harvey (2008) suggested that there are several diseases that may affect this species, including infection by the bacterium Mycoplasma gallisepticum, conjunctivitis, salmonellosis (Salmonella enterica serotype Typhimurium), and West Nile virus. Although they noted that changes are not necessarily related to diseases, Bonter and Harvey (2008) illustrated where the wintering population changes in this species have been most severe, such as in eastern and midwestern Canada and in the Rocky Mountains. The population declines have not been as severe in Minnesota.

Gillahan and Byers (2001) reported that there were no apparent effects of pesticide applications (e.g., of DDT) and cited several studies in western North America that found little evidence on effects of logging or management. However, McGarigal and McComb (1995) have emphasized that Evening Grosbeaks are highly associated with mature forests.

Klem (1989) reported that Evening Grosbeaks were the 10th most common bird killed at windows, which is often a hazard of frequenting bird feeders. Langham et al. (2015) and the National Audubon Society (2015) in their analysis of species’ susceptibility to climate changes suggested it is “climate threatened.” The threats are similar to those for many species with a boreal breeding distribution and found in the coniferous zone of the Rocky Mountains. Its breeding climate space is predicted to decrease by 29%, and its wintering range is projected to shift northward to higher altitudes by 58%.

Erickson (2015) noted that we do not know with any certainty what has caused the dramatic decline in the Evening Grosbeak’s populations. She summarized contributing factors as (1) the reduction in spruce budworm populations; (2) forestry practices that reduce the availability of seeds from maples, like box elder, which have been replaced by fast-growing softwood trees; (3) exploitation of forest lands for mining, such as the Alberta tar sands; (4) collisions with cars, because the species is drawn to roads to exploit salt and grit (2,000 were reportedly killed in a 16-km stretch in British Columbia [Syesis 14: 163, 1981]); and (5) window-kill mortality, emphasized by Klem (1989).

The decline of the Evening Grosbeak is distressing to many who have enjoyed watching these gregarious and colorful birds gorge on seeds at bird feeders. Its decline is a combination of many factors, but at this time its future remains a mystery.