A regular but local permanent resident in northern Minnesota; the Great Gray Owl was rare during the Minnesota Breeding Bird Atlas (MNBBA).

Great Gray Owls are widely distributed across the boreal forests of Canada from Quebec to Alaska and south in the Rocky Mountains to northern California and northwestern Wyoming. In the Midwest, the species is found in northern Minnesota, and breeding birds have been found in Wisconsin and Michigan. It is also a Holarctic species that occurs in northern North America and across northern Eurasia.

Assigned a Continental Concern Score of 11/20 by Partners in Flight; designated a Regional Forester Sensitive Species in the Superior National Forest by the U.S. Forest Service. 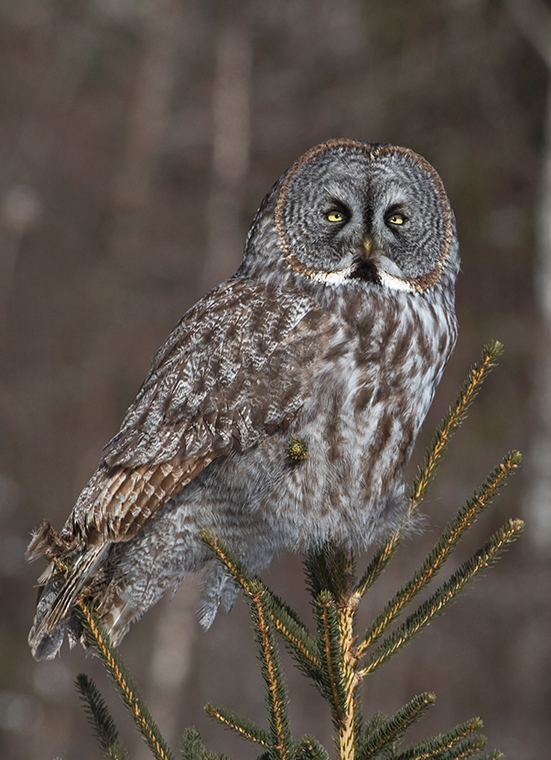 Hatch (1892) considered the Great Gray Owl a species that “is really a more northern bird than the Snowy Owl” and considered it not “very common.” Most of his descriptions were of birds mounted that appeared to have been collected during winter, because he said they “retire northward in the latter part of April.”

Great Gray Owls were also known primarily as a winter visitor by Roberts (1932). He noted a suspected breeding female that was collected by P. O. Frykland in April 1926 in Roseau County. In the 1936 edition of his treatise on Minnesota birds, Roberts confirmed the first nesting record for Minnesota from Roseau County in April 1935, where a nest with 3 eggs was found by a trapper and delivered to Frykland (see also Turner 1935).

Forty years later, Green and Janssen (1975) described the Great Gray Owl as a “casual summer resident.” They noted the 1935 nesting record and the 1970 summary of another nest in Roseau County, described in detail by Nero (1970). They also reported breeding season observations from 7 counties, including Aitkin, Clearwater, Cook, Itasca, Lake, Lake of the Woods, and St. Louis. There was also a reliable, though unusual, summer observation in Anoka County on June 11, 1981 (Maxson 1981).

In 1982, Johnson summarized that there “are currently 49 nest records for the state.” He included confirmed nests from 9 counties: Aitkin, Beltrami, Cass, Itasca, Koochiching, Lake of the Woods, Pine, Roseau, and St. Louis. Based on the new breeding information, Janssen (1987) identified the Great Gray Owl as a summer resident and a “local permanent resident in the north.” He reported confirmed nesting since 1970 in 7 counties, including all of the counties listed by Johnson except Beltrami and Pine Counties. He noted there had been sight observations of Great Gray Owls from Carlton, Cook, and Lake Counties. In 1998, Hertzel and Janssen did not add any additional counties to the confirmed list of counties since 1970.

MNBBA participants reported 83 records from 11 counties, spread from Cook to Clearwater and Roseau Counties, and south to Aitkin County and northern Cass County (Figure 1). The records included 9 confirmed nesting blocks in 4 counties: 1 in Aitkin County, 1 in Cass County, 3 in Lake County, and 4 in St. Louis County (Figure 2; Table 1). A total of 22 of the 65 blocks (34%) with records were in priority blocks. Records with some potential evidence of nesting were from all of the 10 counties previously mentioned as having confirmed nesting, except Pine County. These data support Janssen’s (1987) description of the Great Gray Owl as a local permanent resident in northern Minnesota.

In their review of the Great Gray Owl in North America, Bull and Duncan (1993) simply noted that there were no data on historical changes to its distribution. Johnson (1982) stated that “in all likelihood we have always had a regular, fluctuating, but until recently an undiscovered population of Great Grays in the state.” Great Gray Owls nest in very remote areas that were not well covered in the 1800s or early 1900s by bird watchers. The increase in coverage that has occurred since the first nest was discovered in 1935 and especially in the 1970s is the best explanation for any apparent increase of the species’ range southward into Minnesota.

Robbins (1991) documented nesting in Wisconsin following extensive surveying efforts in the 1980s. Many reliable spring observations were made, but only after 72 nest platforms were erected between 1979 and 1986 was a successful nest found, in Ashland County in northern Wisconsin in 1988 (Merkel 1989). Michigan recorded its first nest in 2004, at Seney National Wildlife Refuge in the eastern Upper Peninsula (Chartier et al. 2013). Chartier et al. also stated that increased surveying efforts in Michigan and in other places have yielded increased breeding records for this species. 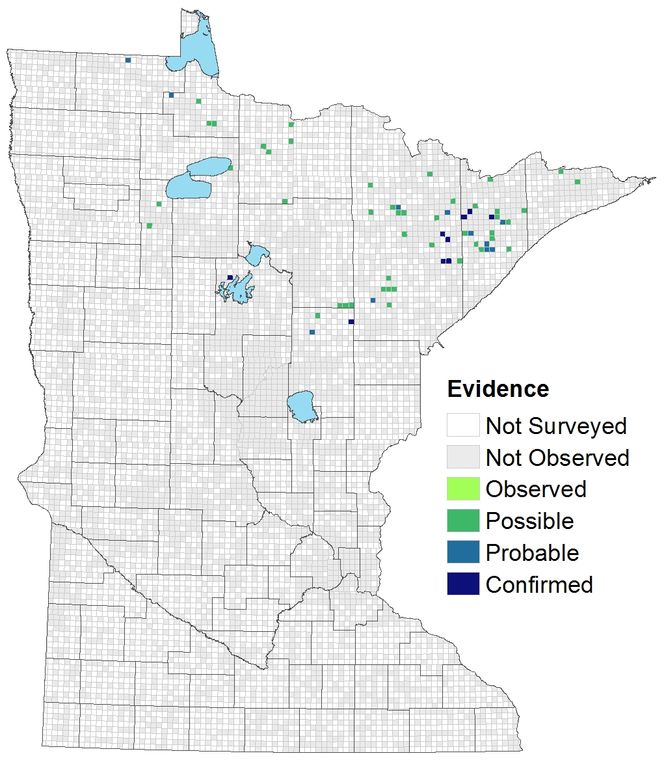 Breeding distribution of the Great Gray Owl in Minnesota based on the Breeding Bird Atlas (2009 – 2013).

Summary statistics of observations by breeding status category for the Great Gray Owl in Minnesota based on all blocks (each 5 km x 5 km) surveyed during the Breeding Bird Atlas (2009-2013).

Summary statistics for the Great Gray Owl observations by breeding status category for all blocks and priority blocks (each 5 km x 5 km) surveyed during the Minnesota Breeding Bird Atlas (2009-2013).

Despite its large size, this “Phantom of the Forest,” as the Great Gray Owl is nicknamed, is a secretive species that occurs in low numbers in dense boreal forests and can be difficult to find (Nero 1980). It prefers bogs, muskeg, coniferous forests, and forest edges where suitable prey are found (Steve Loch, pers. comm.; Bull and Duncan 1993) (Figure 3). Tamarack bogs are preferred for nesting, and drier pine stands and open areas without trees were avoided in Manitoba (Bull and Duncan 1993). Great Gray Owls will readily nest in upland forests as long as they are near suitable foraging habitat such as bogs, muskeg, or sedge meadows.

Suitable nest sites may often be a limiting factor for the species because it relies on finding a suitable flat surface, such as on dead snags, old nests of raptors or corvids, and man-made structures (Nero et al. 1974). Bohm (1988) placed 18 nest boxes in suitable habitat in Aitkin and St. Louis Counties during the winters of 1984–85 and 1986–87 and found that 6 of the 18 nest boxes were used during his study. He pointed out that the configuration of many trees in habitats where the Great Gray Owl nests, such as black spruce, tamarack, and black ash, is not conducive to the construction of natural stick nests, so artificial nest structures can provide opportunities for Great Gray Owls to nest in these habitats. Bull and Henjum (1990) provided evidence that artificial nest platforms were preferred to natural ones when both were available and nest success was higher on artificial platforms (83% compared to 66% on natural sites). 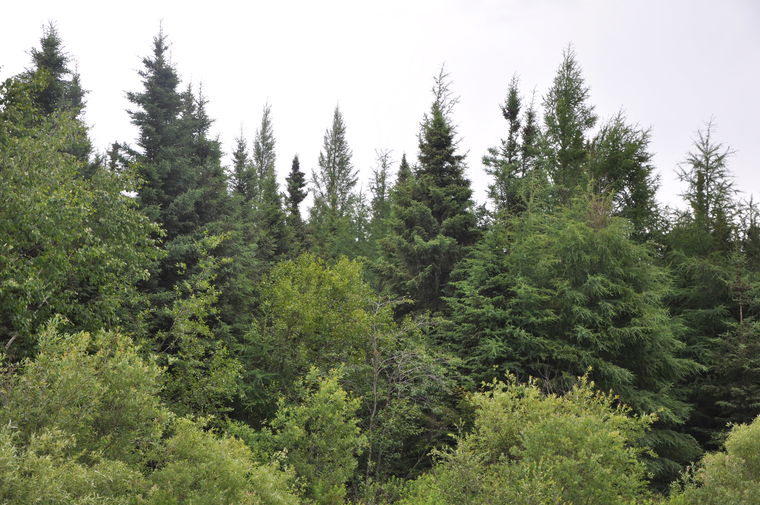 The rarity of the Great Gray Owl makes populations difficult to estimate, but their population in Minnesota is likely very low. Partners in Flight estimated a United States and Canadian population of 90,000 adults, with a U.S. population of 13,000 (Partners in Flight 2017). They estimated the global population of this Holarctic species to be 190,000 individuals. Most of the population in the United States is found in the western Rocky Mountain states and Alaska. Environment Canada (2011) estimated a broad population range for Canada of 50,000 to 500,000 adults. The great variability in estimates is due to wide fluctuations in the species’ populations, which depend on a food supply of small mammals, especially voles, affected by the severity of winter conditions.

The winter influx of Great Gray Owls and their potential cyclicity are legendary in Minnesota. Svingen and Lind (2005) provide an excellent review of the extraordinary numbers that occurred in 2004–2005 and the progression of their chronological movements in the state. Using a network of randomized surveys, volunteers, and monthly surveys, they estimated that the total number of Great Gray Owls in Minnesota from fall 2004 through mid-May 2005 was about 5,225! Moreover, this was likely a conservative estimate and at least 13 times greater than previous records, such as the 394 Great Grays in 2000–2001. They also summarized 11 previous irruptions that occurred in Minnesota from 1965 to 2002.

There are few population density estimates, but research carried out by Nero and Duncan found an estimate of 1.72 pairs per km2 in southeastern Manitoba, and 0.66 pairs per km2 in northwestern Minnesota (Duncan 1987).

Great Gray Owls had a relatively high Continental Concern Score of 11/20, indicating some concern for the species in North America (Partners in Flight 2017). The species’ high score was largely driven by its low population size in North America. The species is also designated a Regional Forester Sensitive Species in the Superior National Forest, where nest sites are protected and suitable hunting perches are maintained.

Canada considers the population of the species to be secure and having undergone little change since the early 1970s (Environment Canada 2011). Bull and Duncan (1993) state that among conservation concerns is forest harvesting that can reduce the availability of breeding habitat through removal of perch and nest trees. They suggest forest harvesting be carried out on small, irregularly shaped patches with retention of perch trees, which are essential for sighting and capturing prey as well as nest sites. Loss of habitat in Manitoba due to agriculture and peat extraction was also listed as a potential threat to the Great Gray Owl’s population.

The use of artificial nest structures, as noted above, could potentially aid the breeding population of the Great Gray Owl in Minnesota and in North America. In Europe, Finland has a massive program of artificial nesting structures for many species of raptors, including for the Great Gray Owl (Sulkava and Huhtala 1997). Monitoring and maintenance of these structures require an equally massive effort by volunteers, without which the effort can be too costly to implement. For instance, in Finland in 1994, 22,691 owl nest boxes were checked for occupancy! This magnitude of effort is not realistic for anywhere in North America, even for a localized area. Maintaining suitable areas of forested habitat for nesting and foraging is a more realistic option.

Langham et al. (2015) and the National Audubon Society (2015) labeled the species as “climate endangered” in North America. The society projected substantial loss of suitable climatic condition in Minnesota and northward movements into Canada. In Minnesota, climate change, with its predicted increases in temperature, is projected to result in reductions of suitable coniferous forests for nesting and to eliminate the physiological climate regime favored by the species.

Educational programs have reduced the illegal shooting of owls, but this source of mortality has not been completely eliminated. Great Gray Owls are an easy target because they are so tame. However, owls provide substantial benefits because of their near exclusive predation on voles and mice. Collisions with vehicles are also common because the owls tend to forage in ditches near roads, especially during their winter movements to the south (Nero and Copland 1981).

Cadman and colleagues (2007) wrote, “Few birds capture the attention of even the most casual birders as dramatically as the Great Gray Owl. Whether because of its imposing size, almost human-like face, or apparently calm demeanor, this largest of North American owls is difficult not to notice and admire.” Because of its remote breeding habitats, changes in the phantom’s population or distribution in Minnesota are a challenge to detect, but the Great Gray Owl’s future is likely dependent on the decisions made regarding climate and forest management.