A regular summer resident and migrant; the Great-tailed Grackle was rare in abundance during the Minnesota Breeding Bird Atlas.

Distributed across the southwestern United States and Mexico, the Great-tailed Grackle has been expanding its range northward since the early 1900s. Highest breeding densities, however, are still restricted to southern California, southeastern New Mexico, and portions of Texas (Figure 1).

Assigned a Continental Concern Score of 4/20 by Partners in Flight.

A partial migrant in the northern regions of its breeding range that winters in central and southern states.

An open-cup nest usually placed in trees and shrubs but occasionally in marsh vegetation. A colonial species nesting with just a few pairs to hundreds of birds.

Breeding distribution and relative abundance of the Great-tailed Grackle in North America based on the federal Breeding Bird Survey from 2011 to 2015 (Sauer et al. 2017).

A newcomer to Minnesota, the Great-tailed Grackle was still more than 1,000 miles away in southern Texas when Roberts (1932) wrote his comprehensive treatise on Minnesota birds. Originally a year-round resident in Central America and northern South America, the grackle slowly began spreading northward in the 1900s, reaching Austin, Texas, by 1915 and Houston by 1938. The pace of the expansion, however, exploded in the latter half of the twentieth century. Oklahoma, for example, documented its first observation in 1953, Kansas in 1963, Missouri in 1972, and Nebraska in 1976 (Johnson and Peer 2001; Hertzel and Hertzel 2001). It was only a matter of time before the birds were sighted in Minnesota.

The first reported observation occurred a few years later in June 1982 in Dakota County. An adult male was observed by Paul Egeland at Black Dog Lake (Egeland 1983). An expert birder, Egeland first heard the bird and immediately recognized that it was not a species he had ever heard in Minnesota. Other experts, however, were hesitant to confirm the report because of the difficulty of distinguishing a Great-tailed Grackle from a Boat-tailed Grackle, the latter being restricted to marshes along the Gulf and Atlantic Coasts. The two are closely related to one another and nearly identical in appearance. Distinguishing the two species from one another requires the astute observer to take special note of the bird’s eye color, head shape, and vocal repertoire. Although the 1982 record was carefully documented, it was not sufficient to totally rule out the occurrence of a Boat-tailed Grackle. As a result, the record was initially classified as a Great-tailed Grackle/Boat-tailed Grackle by the Minnesota Ornithologists’ Union Record Committee (Eckert 1983).

It would be another eleven years before official confirmation of the species’ presence in Minnesota was documented. In April 1993, another adult male was seen on a farm near the town of Faribault in Rice County. Remaining in the vicinity from April 4 to April 10, birders were able to positively confirm its identity as a Great-tailed Grackle (Smith 1993; Glassel 1993). More observations elsewhere in southern Minnesota soon followed. Hertzel and Hertzel (2001) provide an excellent summary of the species’ expansion into the state through the spring of 2001, with comments on its overall expansion throughout the upper Midwest. Indeed, by 2008, prior to the Minnesota Breeding Bird Atlas (MNBBA), the species had been observed in a total of 16 counties during the summer season; the summer season was defined using the grackle’s MNBBA summer safe dates (May 10 to July 20).  The counties included the original 1982 observation in Dakota County that was, most likely, a Great-tailed Grackle (Glassel 1993). Although the majority of counties were in southwestern Minnesota, the species also was observed as far east as Chisago County in east-central Minnesota and Olmstead County in southeastern Minnesota (Minnesota Ornithologists Union 2016).

The first nesting record of the Great-tailed Grackle in the state was documented in the summer of 2000. Two nests, each with four eggs, were found in Jackson County, just three miles north of the Iowa border (Wiens 2001). Although there have been scattered reports of birds nearly every summer in the southern half of the state since 1998, Jackson County remains the only county where nesting has been confirmed (2000, 2010, and 2014; Minnesota Ornithologists Union 2016). True to the species’ colonial nature, the 2000 nesting was of two breeding pairs in the same locality and the 2010 nesting included three nesting pairs; the 2014 report did not delineate the number of nests. In 2004, the Minnesota Ornithologists’ Union Record Committee took the official action of changing the status of the Great-tailed Grackle in Minnesota from Accidental to Regular (Eckert 2004).

Only a handful of records for this rare species were gathered during the MNBBA. Participants tallied just eleven records in eight of the atlas blocks that were surveyed, Breeding was confirmed in one block in southern Jackson County, a site where the species has been found repeatedly over the years (Figure 2; Table 1). It was reported in 5 of Minnesota’s 87 counties; this includes two possible late May records from Douglas County, where the species had not previously been reported, and one probable and one possible record from Lyon County . 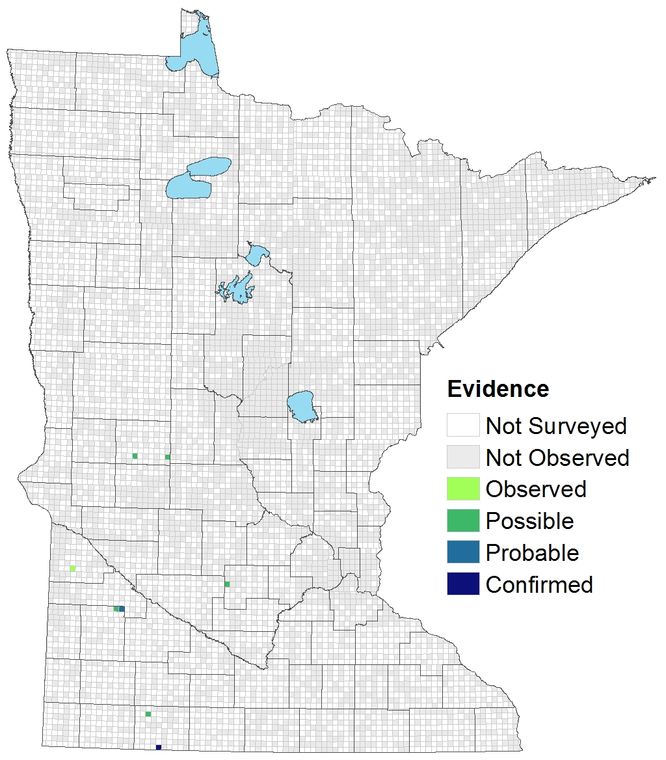 Breeding distribution of the Great-tailed Grackle in Minnesota based on the Breeding Bird Atlas (2009 – 2013).

Summary statistics for the Great-tailed Grackle observations by breeding status category for all blocks and priority blocks (each 5 km x 5 km) surveyed during the Minnesota Breeding Bird Atlas (2009-2013).

Throughout its range, from Central America north through the Central Plains and Upper Midwest, the Great-tailed Grackle is a species of open country. Its native habitat includes brushy clearings, open forests, and marshes. But it has adapted well to features of the human landscape and is equally at home in agricultural and urban settings, including grazed pastures, cultivated fields, cemeteries, neighborhoods, and city parks. Only dense forests and arid lands lacking water are avoided. Indeed, the grackle’s three primary habitat requirements are a water source, open country for foraging, and trees or shrubs for nesting and roosting (Figure 3). Lacking the latter, tall emergent wetland vegetation also may be used (Johnson and Peer 2001; Kaufman 1996).

In Minnesota, few habitat data are available to characterize sites where observations have been made, outside of an account provided by Hertzel and Hertzel (2001) at the Jackson County nesting site. Here the species utilized a small wetland bordered by a fringe of emergent cattails, as well as the surrounding pastures. The two nests found in the 2000 breeding season were anchored to cattails approximately 0.4 meters above the water’s surface. Although the species has adapted to nesting in trees and various man-made structures on farmsteads or in small towns in the Central Plains, many of the nests have been placed in wetlands as the birds colonize new sites (Hertzel and Hertzel 2001; Dinsmore and Dinsmore 1993).

From a landscape perspective, all eight records reported during the MNBBA occurred in blocks that ranged from intensely cultivated with small, scattered shelterbelts, wetlands, and/or lakes to moderately cultivated with numerous scattered woodlots and lakes. One block had a small town located in it as well. 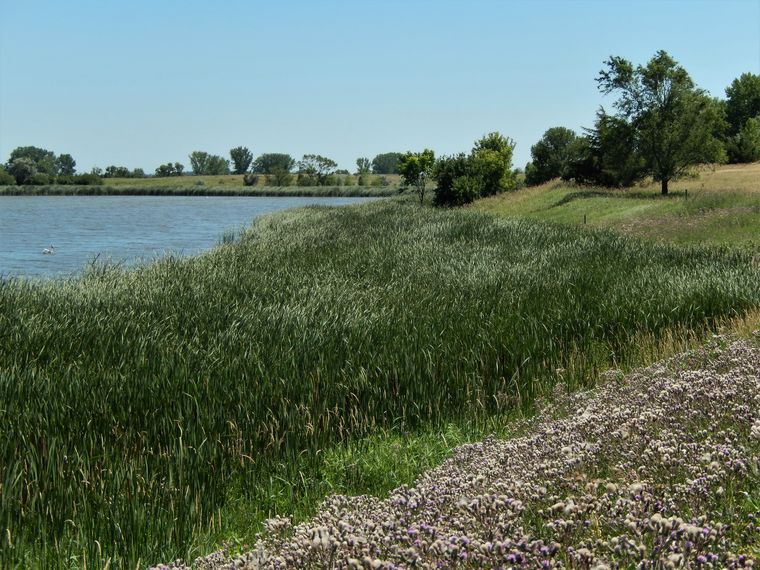 Long-term monitoring data collected by the federal Breeding Bird Survey (BBS) have been used to generate a North American population estimate of 8 million birds (Rosenberg et al. 2016). The population is, of course, too small in Minnesota to generate an estimate, but based on observations to date it likely numbers less than a few hundred birds. The largest number of birds that have been seen in one general area was 40 – 50 birds observed  in Jackson County during the fall of 1999 (Minnesota Ornithologists’ Union 2016). Iowa is estimated to have a population of approximately 5,000 birds (Partners in Flight Science Committee 2013). Predictably, within the United States, breeding numbers are highest in the southwestern states, with the highest numbers observed along the Texas–Mexico border (Figure 1).

Since the BBS began in 1966, the Great-tailed Grackle has demonstrated a spectacular rate of increase throughout the BBS’s survey area. In contrast to so many species that have experienced population declines, the grackle has increased at an average annual rate of 1.99% per year; that rate has more than doubled to 4.48% per year since 2005 (Figure 4). The highest statistically significant rate of increase has been observed in California, where the population has increased 18.68% per year (Sauer et al. 2017). Indeed, a species that barely occurred beyond south Texas in 1900 had, by the end of the twentieth century, been documented nesting in at least 14 states and had been observed in 21 states and 3 Canadian provinces (Johnson and Peer 2001).

The Great-tailed Grackle’s rapid expansion northward has been tied to an increase in irrigation in the arid lands of the southwest and central plains states along with widespread tree planting and urban development (Johnson and Peer 2001). 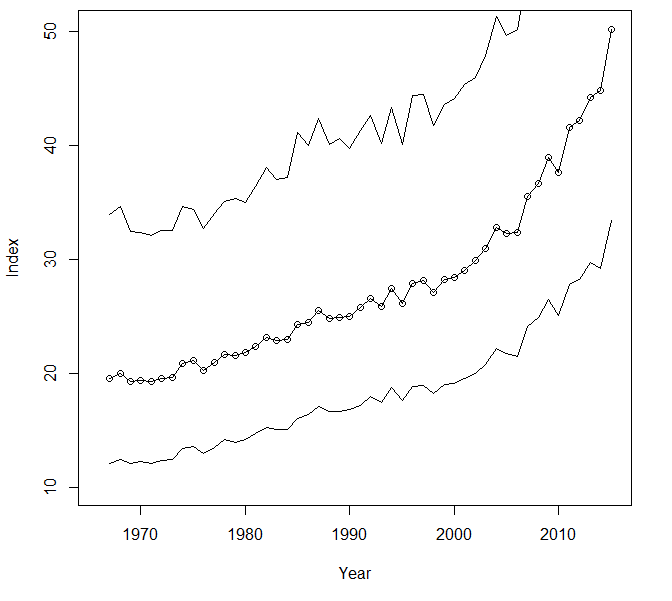 Population trend map for the Great-tailed Grackle in North America from 1966-2015 based on the federal Breeding Bird Survey (Sauer et al. 2017).

Highly adapted to the features provided by a settled landscape, the Great-tailed Grackle is not a conservation priority and has been assigned a low Continental Conservation Score of 4/20 (Rosenberg et al. 2016). A warming climate also poses little threat to this adaptable species (North American Bird Conservation Initiative, U.S. Committee 2010). In many areas in the Southwest and in Central America, the grackle is considered an agricultural pest. Its habit of foraging on emerging corn, sorghum, and citrus crops has led to the implementation of numerous measures to deter the birds from agricultural fields and orchards (Johnson and Peer 2001).

Regardless, at the rate the species is expanding northward, Minnesotans are likely to become a lot more familiar with Great-tailed Grackles in the coming years.