A regular but rare breeding species and a common migrant; regular during the winter but largely limited to the North Shore of Lake Superior and southeastern Minnesota from the Twin Cities south. A very rare species during the Minnesota Breeding Bird Atlas (MNBBA).

A Holarctic species, in North America the species’ breeding distribution spans the interior of western Canada and Alaska, with small extensions south into Montana, the Dakotas, and northern Minnesota. Rare throughout its breeding range, the core of its distribution is in the Canadian Prairie Provinces (Figure 1).

Medium-distance migrant that winters in coastal waters or inland lakes in the southeastern United States.

A diver that feeds on aquatic insects, small fish, and crustaceans.

A floating platform constructed with aquatic vegetation and often anchored to emergent vegetation. 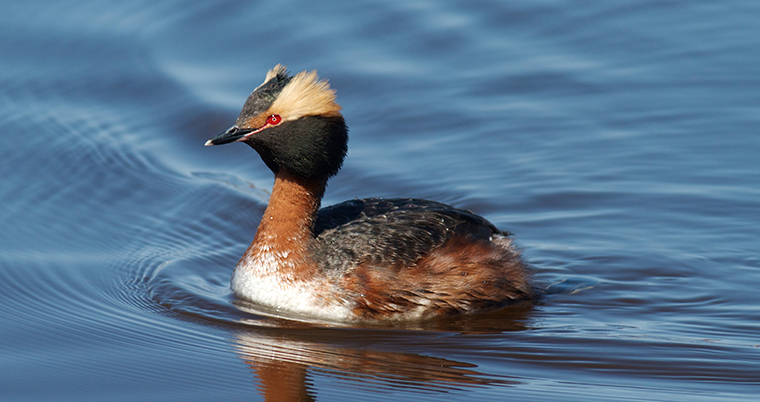 Breeding distribution and relative abundance of the Horned Grebe in North America based on the federal Breeding Bird Survey from 2011 to 2015 (Sauer et al. 2017).

In the early 1900s, the Horned Grebe was abundant in Minnesota during the spring and fall migration seasons. One particular spring season, in 1928, Roberts (1932) commented that the numbers passing through southern Minnesota were “truly astonishing.”

But their abundance during the summer months was less clear. Although Roberts described the grebe as a breeding resident throughout the state, he wrote, “It is apparently rare during the nesting season in the southern counties, but northward, it is common in many suitable localities.” Indeed, one observer reported they were more common than Pied-billed Grebes at Mud Lake in Marshall County. Nests were documented in just a few widely scattered localities: Heron Lake (1885) and Loon Lake (1900) in Jackson County, Cedar Lake in McLeod County (1926), and Mud Lake in Marshall County (1901). A female with young also was reported in Lincoln County (1897); 2 immature birds were reported on Silver Island Lake in Lake County (1930); and a number of adults were suspected nesting on Twin Lakes in Kittson County (1929). Whether these were widely dispersed nestings of lone pairs or simply examples of a more abundant and widely distributed nesting population, as Roberts contended, is less clear.

Nevertheless, by the time that Green and Janssen (1975) provided an updated account of the species 40 years later, nesting was largely confined to the northwest region of the state, principally Kittson, Mahnomen, Marshall, and Roseau Counties. The overall paucity of records confined to such a small area of the state led to growing concern about the species’ status. In 1984 it was officially classified as a state Special Concern Species (Coffin and Pfannmuller 1988).

A few years later, Janssen (1987) reported that nesting had been confirmed in Pennington County as well. He noted there were reports in the late 1970s and early 1980s of adults and broods on Lake Amelia in Pope County and adults in Becker and Cook Counties. Unlike Roberts (1932) and Green and Janssen (1975), he also mentions a 1931 nesting record in Wright County and a 1944 record from Kandiyohi County, but no additional details were noted. His distribution map identified 4 counties where nesting had been confirmed since 1970: Marshall, Pennington, Pope, and Roseau. Several years later Hertzel and Janssen (1998) added Kittson County to the list, but details regarding confirmed nesting in this county beyond 1966 could not be found.

During the summer of 1991, Boe (1992) undertook a comprehensive review of all known Horned Grebe nesting records and conducted an extensive field survey of potential nesting habitat in northwestern Minnesota. She found only 17 documented nesting attempts reported from 1931 to 1989. Seventy-six wetlands in northwestern Minnesota that were identified as having suitable habitat for Horned Grebes were surveyed. Unfortunately only 1 bird, on the Roseau River Wildlife Management Area in Roseau County, was found. The absence of all but 1 bird in the very region that was believed to be the species’ stronghold led to its reclassification as a state Threatened Species in 1996 (Minnesota Department of Natural Resources 1995). Although there have been occasional reports of individuals during the summer months since Boe conducted her field investigation, more than 20 years passed before nesting was confirmed again in northwestern Minnesota during the MNBBA in 2013. Even the extensive fieldwork conducted by the Minnesota Biological Survey resulted in the identification of only 3 breeding season locations: 2 in north-central Roseau County and 1 in southern Beltrami County (Minnesota Department of Natural Resources 2016).

Beginning in 2008 there were a handful of reports of adults with young in northeastern Minnesota. One report specifically mentioned the presence of flightless young, but there were no additional details (Minnesota Ornithologists’ Union 2016). These were all late-summer reports outside of the species’ recent breeding range. Because Horned Grebes begin moving from their nesting grounds in late summer, it is possible that the observations were early migrants that nested elsewhere (J. Green pers. com.; Minnesota Department of Natural Resources 2012). Nesting records now are so rare that any account of possible nesting in the state should be accompanied with good documentation.

During the MNBBA, observers reported Horned Grebes in only 4 of the surveyed atlas blocks and in only 1 of the priority blocks. Breeding evidence was reported in 1 block within the Agassiz National Wildlife Refuge, where approximately 4 breeding pairs and 1 brood were observed in 2013 (Figure 2; Table 1). Three other possible breeding records were found in northwestern Itasca County, southern Beltrami County, and Cass County (Figure 2). Due to the continuing paucity of reports, the Horned Grebe was again reclassified in 2015 and is now a state Endangered Species (Minnesota Department of Natural Resources 2015).

Although it is clear that the species has declined in abundance and distribution in Minnesota in the past 50 to 60 years, the true extent of its distribution in the late 1800s and early 1900s is not well understood. Commenting on historical changes to its breeding range in North America, Stedman (2000) noted the species may have bred farther south and east in earlier times, but the evidence is mixed. Some localities where the species is alleged to have bred, such as in New York and Ontario, may not have supported breeding populations, or, at best, just a few pairs. In other localities, however, such as New Brunswick, Quebec, and South Dakota, he believed there is solid evidence that its breeding range has retreated.

Regardless, the Horned Grebe’s status in Minnesota appears tenuous at best. Although Minnesota birders can still enjoy this species during migration at numerous locations statewide, it is a rare and elusive breeding species. 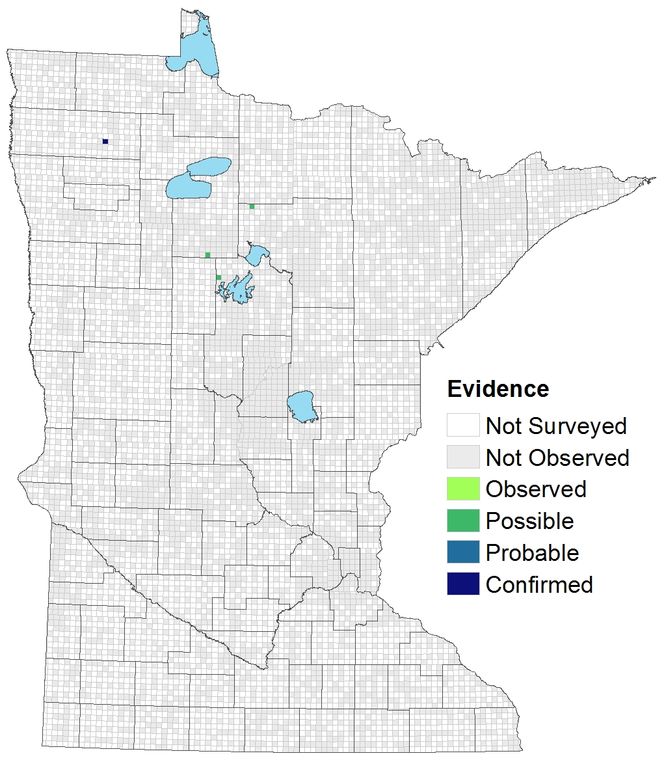 Breeding distribution of the Horned Grebe in Minnesota based on the Breeding Bird Atlas (2009 – 2013).

Summary statistics for the Horned Grebe observations by breeding status category for all blocks and priority blocks (each 5 km x 5 km) surveyed during the Minnesota Breeding Bird Atlas (2009-2013).

Few detailed descriptions of the Horned Grebe’s breeding habitat are available. In general, it selects small freshwater wetlands (less than 10 hectares) with extensive beds of emergent vegetation (Figure 3). Hemi-marshes with open water areas amid dense beds of cattails, rushes, and sedges are preferred (Stedman 2000). Occasionally larger bodies of water are used (Butler et al. 2013), and it is not uncommon to find the grebes in brackish or slightly alkaline waters (Beyersbergen et al. 2004). 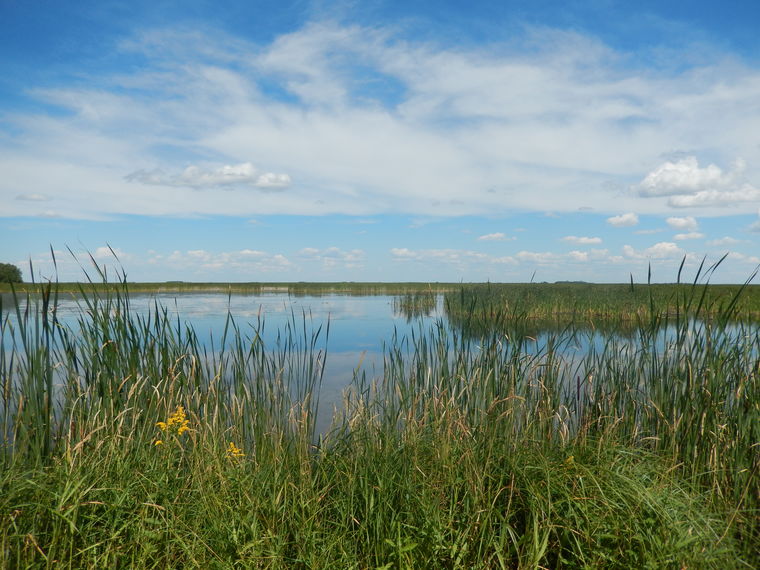 Typical breeding habitat of the Horned Grebe in Minnesota (© Lee A. Pfannmuller).

Marsh birds like the Horned Grebe are not the target of most survey efforts, and the federal Breeding Bird Survey (BBS), conducted along roads, does not adequately cover expansive wetlands. As a result, population estimates are based on a combination of expert opinion and local survey efforts. With these qualifications, the Horned Grebe’s global population was estimated to range from 239,000 to 583,000 individuals (Wetlands International 2015). Nearly 85% of the population occurs in North America, almost exclusively within western Canada, where the largest numbers are found in Alberta and Saskatchewan (Butler et al. 2013). Other researchers have estimated the North American population at 100,000 breeding pairs (Beyersbergen et al. 2004). A recent assessment by Partners in Flight (2017) estimated the global population at 270,00 birds.

Despite the limitations of the BBS, the data collected do demonstrate a decline of 0.47% per year since the survey began in 1966. The trend is not statistically significant due to the small sample size and the species’ relatively low breeding abundance (Sauer et al. 2017). Because Horned Grebes are more gregarious during the winter, Christmas Bird Counts may be a reliable index of population trends. In Mexico and the United States, Horned Grebe numbers on the Christmas Bird Counts have declined significantly at a rate of 0.4% per year since 1966 (Figure 4; Butler et al. 2013). The one potential issue with the Christmas Bird Count data is the challenge of distinguishing Horned Grebes from Eared Grebes in their winter plumage, as the birds are quite similar and their winter ranges overlap along the Pacific coast.

Factors responsible for apparent decline in population numbers and, in some areas, its range contraction, have not received focused research attention. Horned Grebes were among the colonial waterbirds whose plumage was valued for the millinery trade in the nineteenth century but populations have declined long after shooting was a major source of mortality. Speculation regarding factors responsible for the current decline includes concern about the species’ high vulnerability to predation. In the Canadian Prairie Provinces, where the densest populations occur (Figure 1), changes in agricultural practices are believed to be responsible for higher predator numbers (Miller et al. 2001). Other potentially important threats include oil spills on the wintering grounds, wetland loss and degradation, and climate change (Butler et al. 2013; Stedman 2000). 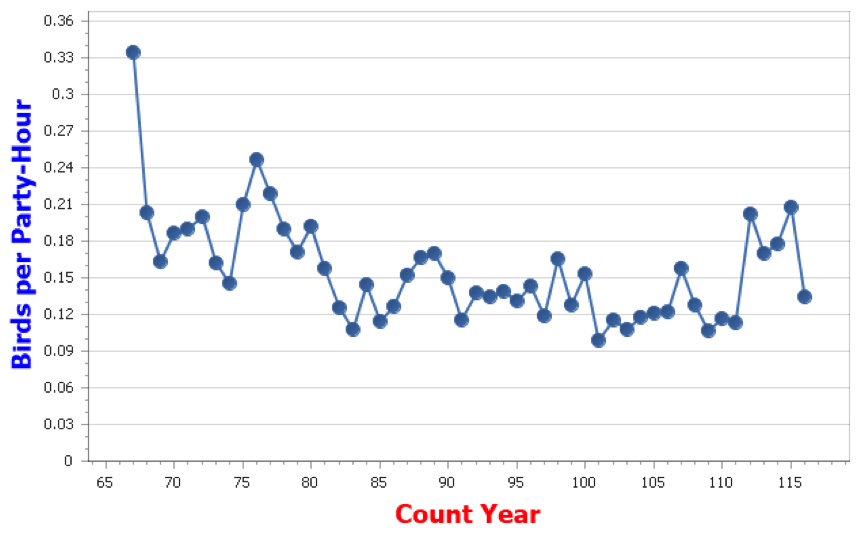 The Horned Grebe was identified as a species of High Conservation Concern by the North American Waterbird Conservation Plan (2006) and a species of High Concern by the Regional Waterbird Plan for the Northern Prairie and Parkland Region (Beyersbergen et al. 2004). Recently it has been assigned a relatively high Continental Concern Score of 12/20 by Partners in Flight (2017). Its decline in North America, coupled with documented declines across Europe, has prompted the International Union for the Conservation of Nature (IUCN) to recently upgrade the status category of the Horned Grebe from Least Concern to Vulnerable (Symes 2015). The Horned Grebe is officially listed as a state Endangered Species in Minnesota and a Species of Greatest Conservation Need (Minnesota Department of Natural Resources 2015).

Few field studies have focused on the conservation and management needs of the Horned Grebe. Proposed conservation measures are general at best. The only sites where the species is consistently reported in Minnesota are on protected wetland basins managed by the U.S. Fish and Wildlife Service and the Minnesota Department of Natural Resources. Beyond these protected areas, continued focus on the protection and restoration of wetlands is critical. The success of Minnesota’s Prairie Conservation Plan, an aggressive, interagency effort to restore Minnesota’s grasslands and wetlands, is essential (Minnesota Prairie Plan Working Group 2011).

Unfortunately, warming temperatures also may pose a significant threat to the species’ future. A recent analysis of the potential impacts of climate change on nearly 600 North American birds classified the Horned Grebe as a climate endangered species. Models predicted that the species could lose 100% of its current summer breeding range by the year 2080 (Langham et al. 2015; National Audubon Society 2016b). Clearly actions to stem the tide of a warmer environment are critical.