A regular breeding species and migrant in southern and western Minnesota; regular but uncommon during the winter months. The Horned Lark was a common species during the Minnesota Breeding Bird Atlas (MNBBA).

A Holarctic species, the Horned Lark breeds in arctic and grassland habitats and agricultural landscapes across Alaska, Canada, and nearly all of the continental United States. However, it is rare to absent as a breeding species from the interior boreal forest, the coastal regions of the Pacific Northwest, portions of New England, and the coastal regions of the southeastern states from North Carolina south and west to eastern Texas. Abundant throughout its range, the highest breeding densities are found in eastern Colorado and western Kansas (Figure 1).

Assigned a Continental Concern Score of 9/20 and identified as a Common Species in Steep Decline by Partners in Flight.

Generally a short-distance migrant wintering in the central and southern United States. Studies have documented that some of the birds present in the winter are migrants from populations of other northern subspecies; whether some of  Minnesota’s breeding residents remain through the winter is unknown.

Open-cup nest constructed in a small depression on the ground. Small articles, such as pebbles or pieces of cornstalk, are often placed beside the nest. 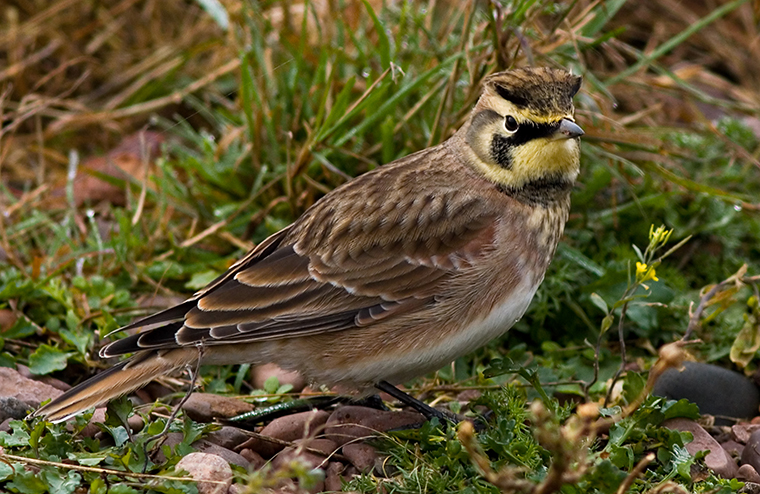 Breeding distribution and relative abundance of the Horned Lark in North America based on the federal Breeding Bird Survey from 2011 to 2015 (Sauer et al. 2017)

Known in the early 1900s as the Prairie Horned Lark, Roberts (1932) considered the species a common summer resident in all but the heavily forested northeastern and north-central regions of the state. Although present in the southeastern counties, its abundance declined rather dramatically in the early 1900s. It remained common in the western region, but in “southeastern Minnesota there is not one pair today where there used to be fifty. Many miles may now be traveled without seeing a single bird over roads where they were once so common as to be called the ‘Road Bird.’” The decline, he thought, might have been due to the loss of suitable habitat and a scarcity of food. At the time, confirmed nesting records (nests with eggs or young) were reported in nine counties: Hennepin, Isanti, Martin, McLeod, Pipestone, Polk, Ramsey, Stearns, and Wadena. In addition to the lark’s widespread distribution during the breeding season, Roberts also noted that many birds were present during the winter months, especially in the southern counties.

One of the challenges in studying the Horned Lark was, and continues to be, deciphering which of the more than 20 North American subspecies actually occur in any given area. Roberts (1932) reviewed an examination of 103 Minnesota specimens and concluded that most, if not all, breeding birds in the state belonged to the Prairie Horned Lark subspecies, Eremophila alpestris practicola, a subspecies that breeds throughout the eastern United States and southern Canada. Northern populations of E. a. practicola are known to move south in December and January of each year (Beason 1995). It is not entirely clear whether all of Minnesota’s breeding Horned Larks migrate south, replaced by migrants from more northerly populations, or if some of the breeding residents remain through the winter months. The 103 Horned Lark specimens that Roberts had examined by the U.S. Biological Survey included 77 specimens of E. a. practicola that were collected during both the summer and winter months. The remaining 26 of the total specimens included birds from three other northern subspecies that were collected during the fall, winter, and/or spring. A later study by Anderson and Oehlenschlager (1968) examined 138 winter Horned Lark specimens collected in Rock County and concluded that most of the birds belonged to two subspecies also noted in Roberts’s (1932) account: E. a. hoyti and E. a. enthymia-leucolaema (the latter being a group of two subspecies). If some Horned Larks from Minnesota’s breeding population remain during the winter, they are clearly joined by migrants from more northerly locales. Whether or not these are all really separate subspecies or simply geographic variations within a large, widely dispersed population remains to be examined. Recent DNA analysis suggests that all the North American subspecies might be one single species (Drovetski et al. 2014).

When Green and Janssen (1975) and Janssen (1987) provided updates on the species’ status, little had changed since Roberts’s time. The species was still described as a breeding resident throughout the state, but scarce in the heavily forested regions of northeastern and north-central Minnesota. Its status in southeastern Minnesota appeared to have improved since Roberts (1932) lamented about its decline in the early 1900s. Janssen, at least, described it as most common “on the western prairies and heavily cultivated regions in the south, central, and east-central regions.” He included a distribution map that delineated 16 counties where nesting had been confirmed since 1970. Hertzel and Janssen (1998) later added 3 more counties to the list. Field work by the Minnesota Biological Survey also documented the species’ widespread occurrence in all but the Laurentian Mixed Forest Province of the state (Minnesota Department of Natural Resources 2016).

During the MNBBA, observers reported a total of 2,327 records of the Horned Lark from 31.0% (1,480/4,772) of the surveyed atlas blocks and from 48.7% (1,138/2,338) of the priority blocks. Breeding was confirmed in 79 of the surveyed blocks (Figures 2 and 3; Table 1). The birds were observed from 83 of Minnesota’s 87 counties, absent only from Carlton, Cook, Itasca, and Lake Counties. Breeding was confirmed in 36 counties (with 2 blocks straddling 2 counties: Todd/Stearns and Cass/Morrison). Twenty-six of the counties were additions to the list published by Hertzel and Janssen (1998), including 2 counties added because blocks crossed county lines (Todd and Cass). As noted by previous accounts, the species continued to be broadly distributed across the state’s grassland and agricultural regions as well as throughout the Eastern Broadleaf Forest Province. Only scattered records are available from the Laurentian Mixed Forest Province and, with the exception of one record in northern St. Louis County and another in Koochiching County, the records in this province are confined to the southern, more developed regions.

The predicted breeding distribution of the Horned Lark using MNBBA data combined with data on climate, habitat availability, landscape context, and detectability predicts that relatively high breeding densities are found throughout the heavily cultivated regions of western and southern Minnesota (Figure 4). Moving east through the Eastern Broadleaf Forest Province breeding densities gradually decline with a rather clear line demarcating where the species rarely occurs across the more extensively forested regions of north-central and northeastern Minnesota.

Primarily a species of the open country of western North America, the Horned Lark readily expanded as the eastern deciduous forests were cleared for agriculture in the late 1800s and early 1900s. They were first reported in southern Ontario by 1868 and in eastern New York by 1880 (Beason 1995). But as farmlands were abandoned, left to succeed to young second growth deciduous forests, or lost to suburban development, the species has declined in abundance and its range has contracted in many areas. In Michigan, Horned Larks have become much less common in the southern Upper Peninsula and the northern Lower Peninsula (Chartier et al. 2013). In Ontario, the species is now almost entirely absent from several regions, including the Southern Shield (Cadman et al. 2007). 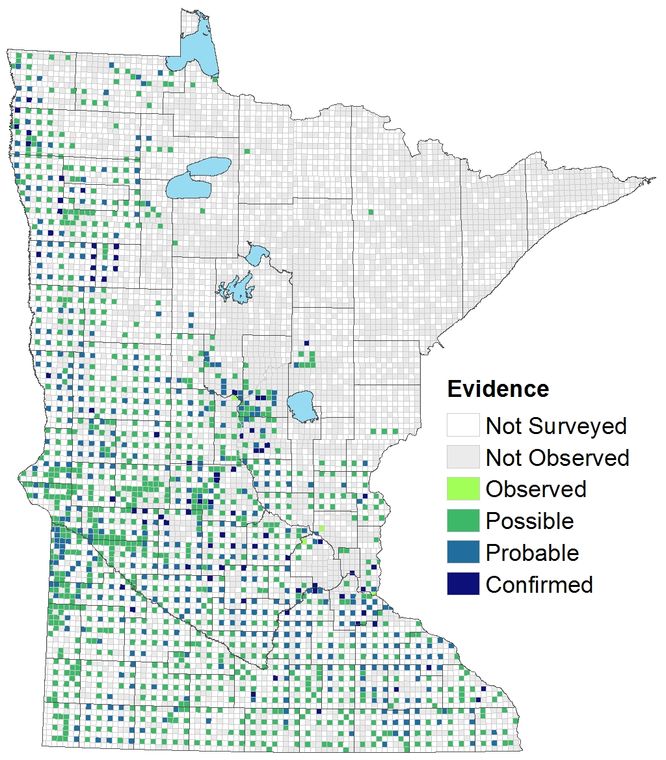 Breeding distribution of the Horned Lark in Minnesota based on the Breeding Bird Atlas (2009 – 2013).

Summary statistics of observations by breeding status category for the Horned Lark in Minnesota based on all blocks (each 5 km x 5 km) surveyed during the Breeding Bird Atlas (2009-2013).

Summary statistics for the Horned Lark observations by breeding status category for all blocks and priority blocks (each 5 km x 5 km) surveyed during the Minnesota Breeding Bird Atlas (2009-2013). 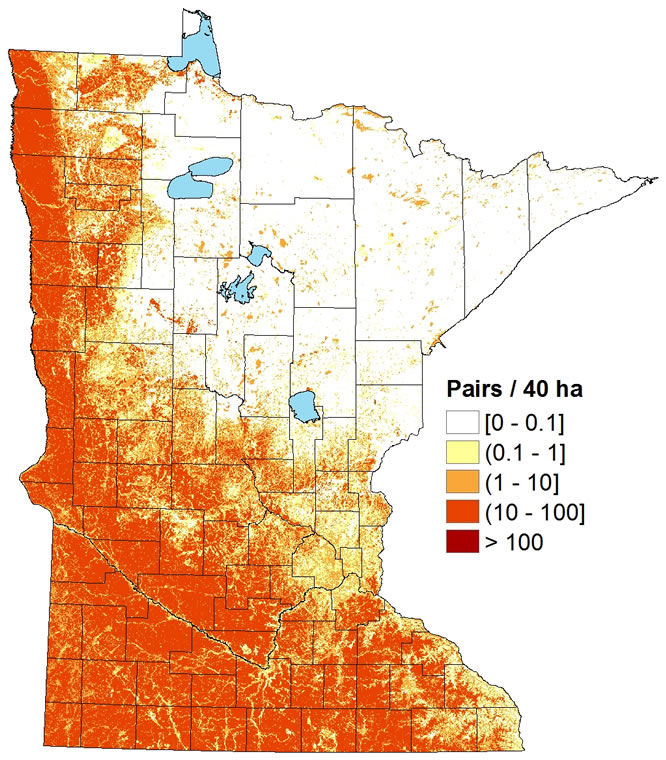 Predicted breeding distribution (pairs per 40 hectares) of the Horned Lark in Minnesota based on habitat, landscape context, and climate data gathered during the Minnesota Breeding Bird Atlas (2009-2013) using the General Linear Modeling method with an adjustment for detectability.

Bent (1942) may have best described the breeding habitat of the Horned Lark when he wrote, “Here is a bird nesting where no bird has a right to nest, a bird in a niche that demands not vegetation but lack of it, a bird alone and unique in its nesting site without a competitor…” Indeed what most characterizes the Horned Lark’s habitat is the relatively sparse vegetative cover of its preferred habitats, including cropland, road right-of-ways, pastures, and recently mowed haylands (Figure 5). As the season progresses, habitat that is suitable early in the season may become unsuitable as the vegetation grows taller and denser. Occupied sites usually contain 10%–37% bare ground, and breeding bird densities are often highest on sites with the lowest densities and heights of vegetation (Dinkins et al. [2000] 2002). An extensive review of grassland species in 2009 (Ribic et al. 2009) reported that the Horned Lark was an area-sensitive species, its density and occurrence increasing as the size of the habitat patch increased. Habitat data collected at MNBBA point counts illustrate the lark’s strong association with croplands (Figure 6). 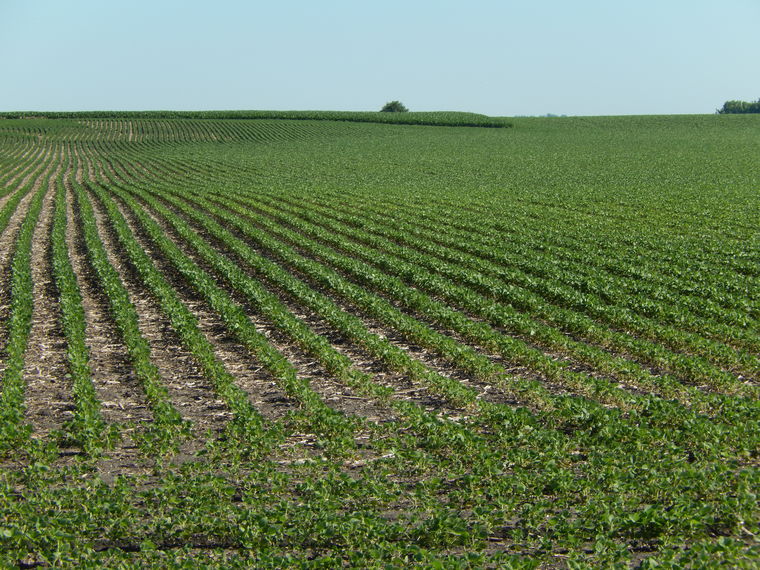 Typical breeding habitat of the Horned Lark in Minnesota (© Lee A. Pfannmuller).

Habitat profile for the Horned Lark based on habitats within 200 m of point counts where the species was present during the Minnesota Breeding Bird Atlas (2009-2013).

Throughout the BBS survey area in the United States and southern Canada, Horned Lark populations have significantly declined an average of 2.46% per year since the survey began in 1966. The species has shown a significant increase in only four states since 1966: Arkansas, Delaware, North Carolina, and South Carolina. In Minnesota, the trend is nonsignificant but tending toward a decline averaging 0.79% per year (Figure 7). Across North America, the species has experienced a cumulative decline of 65% since 1970 (Rosenberg et al. 2016).

An examination of data collected by the Christmas Bird Count since it began in 1900 shows that lark numbers were highest in the years between 1920 and 1940, a time when the species expanded its range as more land was converted for agriculture (National Audubon Society 2015; Beason 1995). In the latter half of the twentieth century, a significant percentage of those agricultural lands, particularly in the northeastern United States, were abandoned and gradually succeeded back to forest cover or were lost to expanded residential development (Beason 1995). However, population declines are prevalent throughout most of the species’ range, including much of the western interior of the United States (Figure 8). Cropland loss in this region from 1949 to 2002 has been the lowest in the United States (Pfeffer et al. 2006) but, as is the case with many grassland species, more intensive use of these agricultural lands may be one of the factors contributing to the lark’s decline. 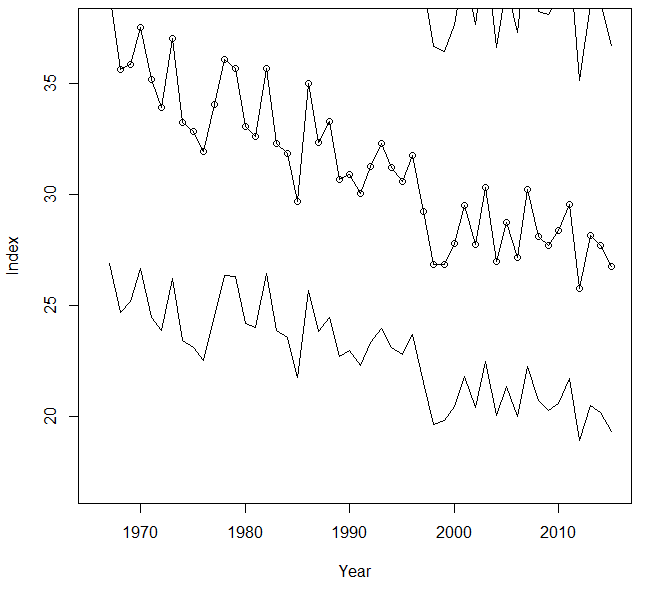 Breeding population trend for the Horned Lark in Minnesota for 1967–2015 based on the federal Breeding Bird Survey (Sauer et al. 2017).

Population trend map for the Horned Lark in North America for 1966–2015 based on the federal Breeding Bird Survey (Sauer et al. 2017).

In 2016 Partners in Flight designated the Horned Lark as a Common Species in Steep Decline (Rosenberg et al. 2016). Its moderate Continental Concern Score of 9/20 is influenced largely by its significant decline.

Specific management recommendations for the Horned Lark focus on establishing disturbances that create open and sparse vegetation. Such practices include burning to reduce woody vegetation and burning, mowing, or grazing to create shorter vegetation (Dinkins et al. [2000] 2002). Established conservation programs designed to improve grassland habitats may not benefit the Horned Lark. In many states the species was entirely absent from Conservation Reserve Program lands. In other states, including Minnesota, the lark was more frequently observed utilizing these sites when they were planted with native grasses rather than nonnative grasses and legumes. In general, they were nearly always more abundant in cropland than in grasslands (Dinkins et al. [2000] 2002).

Although many grassland species are at risk with a warming climate, the initial assessment of the Horned Lark’s vulnerability to climate change was ranked as very low (North American Bird Conservation Initiative 2014). This, coupled with the species’ adaptability to landscapes that are intensively cultivated, provides some promise for the lark’s future. It is critical, however, to better understand the factors responsible for the decline of this abundant species. In the interim, the aerial performance of its faint but beautiful tinkling song should remain a feature of our agricultural landscape for many years to come.