A regular breeding resident and migrant, the Killdeer is occasionally observed during the winter months in southern Minnesota; most birds are late-fall migrants or early-spring migrants. The Killdeer was an abundant species during the Minnesota Breeding Bird Atlas (MNBBA).

Broadly distributed from eastern Alaska across Canada and throughout the entire United States, south to Mexico and the Caribbean. The Killdeer is a summer resident in the northern portion of its breeding range and a permanent resident in the south. Some of the highest breeding densities are found within the north-central United States and south throughout the Mississippi River valley (Figure 1).

Ranked as Moderate Concern by the U.S. Shorebird Conservation Plan Partnership and assigned a Continental Concern Score of 9/20 by Partners in Flight.

In Minnesota, the Killdeer is a short-distance migrant that winters along the Gulf Coast and in the southeastern United States.

Probes with its bill and pats the ground with its feet to feed on a smorgasbord of terrestrial and aquatic invertebrates and crustaceans.

A small depression in the ground, usually lined with pebbles, twigs, and other debris. 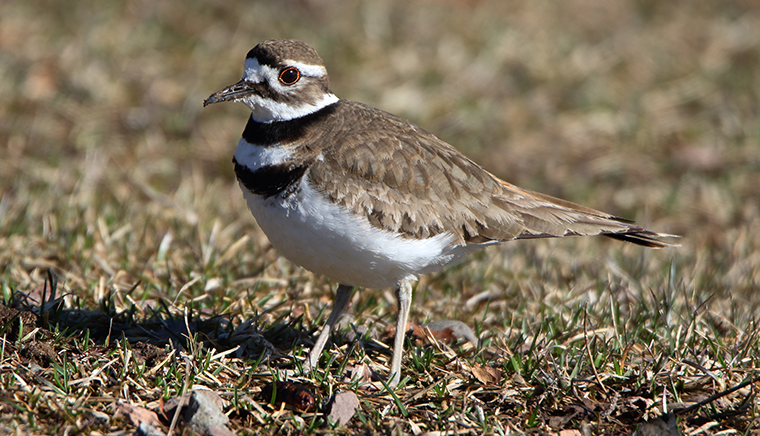 Breeding distribution and relative abundance of the Killdeer in North America based on the federal Breeding Bird Survey, 2011–2015 (Sauer et al. 2017).

In Minnesota, the Killdeer has long been considered a common resident, breeding throughout the state. In his 1932 account of the species, Roberts wrote,

The Killdeer is too common and too well known to need more than a general notice. There is no place in the state, except in deep forests, where its loud and penetrating notes, kill-dee, kill-dee, cannot be heard.

Despite passing the species off as of no consequence, Roberts went on to describe the Killdeer’s habits and antics of feigning injury and misleading an intruder about the location of its well-camouflaged nest. Although he described the species’ nesting distribution as statewide, confirmed nesting records (nests with eggs) were limited to 8 counties, stretching from Dakota and Goodhue in the southeast through the central counties of Hennepin, Isanti, McLeod, and Sherburne; west to Grant; and north to Polk. Other evidence of breeding (nests or adults with young) were reported from Kittson, Lake of the Woods, and Marshall Counties.

The Minnesota Biological Survey reported 799 breeding season locations throughout the state. Despite their wide distribution, records were sparse in the Paleozoic Plateau Section of southeastern Minnesota, in portions of the northern forest, in east-central Minnesota, and in the heavily cultivated landscapes of western Minnesota (Minnesota Department of Natural Resources 2016).

During the MNBBA, observers reported 4,190 Killdeer records in 49.5% (2,380/4,805) of the surveyed atlas blocks and in 66.8% (1,561/2,338) of the priority blocks. Breeding was confirmed in 12.9% (618/4,805) of the surveyed atlas blocks (Figures 2 and 3; Table 1). Although the species was found throughout the state, records were least abundant in northeastern and north-central counties. Regardless, the Killdeer was reported from all 87 of Minnesota’s counties and was confirmed nesting in 86 counties, 19 more than delineated by Hertzel and Janssen (1998). Brown County, along the Minnesota River in southwestern Minnesota, was the lone county without a confirmed nesting record during the atlas.

As broadly distributed as the Killdeer is outside of north-central and northeastern Minnesota, the core of the species’ range is clearly in the agricultural region of the state, according to a predicted distribution model that incorporated the Killdeer’s current distribution along with data on climate, habitat, landscape cover, and detectability (Figure 4). According to the model, breeding densities are predicted to gradually decrease through the Eastern Broadleaf Forest Province and decrease to nearly zero in Lake and Cook Counties. The one area of abundance in northern Minnesota is along the Iron Range in St. Louis and Itasca Counties. This predicted distribution is remarkably similar to the map of the Killdeer’s relative abundance in Minnesota generated from the federal Breeding Bird Survey (BBS), which places the highest density of breeding birds in southwestern Minnesota (Figure 1).

Nearly one hundred years after Roberts wrote his first account of the Killdeer’s status in Minnesota, it appears that little has changed. No doubt, as the northern forest landscape became more fragmented by urban, industrial, and small-scale agricultural development, the species was more frequently encountered in this region. Significant range expansions have also been documented across North America during the twentieth century, with birds expanding from interior breeding grounds into more coastal areas. Included are expansions northeast into Quebec, Nova Scotia, and Newfoundland, south into the Florida peninsula, and northwest along the coast of British Columbia (Jackson and Jackson 2000). Some states and provinces where the species originally expanded are now witnessing a retraction in the Killdeer’s distribution. Ontario, Michigan, and Vermont, for example, each have documented a retraction from the northern regions of the state or province. These were believed to be partly due to abandonment and reforestation of marginal farmlands (Cadman et al. 2007; Chartier et al. 2013; Renfrew 2013). 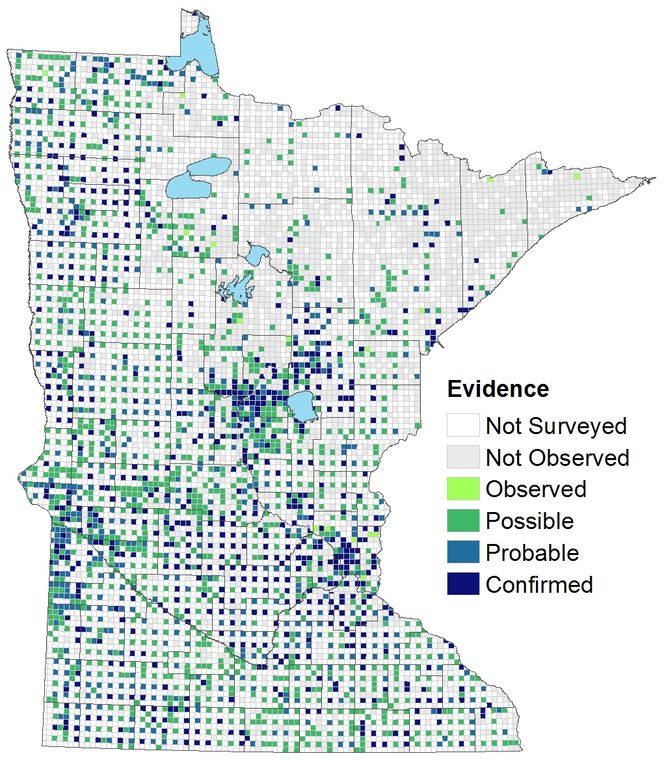 Breeding distribution of the Killdeer in Minnesota based on the Breeding Bird Atlas (2009 – 2013).

Summary statistics of observations by breeding status category for the Killdeer in Minnesota based on all blocks (each 5 km x 5 km) surveyed during the Breeding Bird Atlas (2009-2013).

Summary statistics for the Killdeer observations by breeding status category for all blocks and priority blocks (each 5 km x 5 km) surveyed during the Minnesota Breeding Bird Atlas (2009-2013). 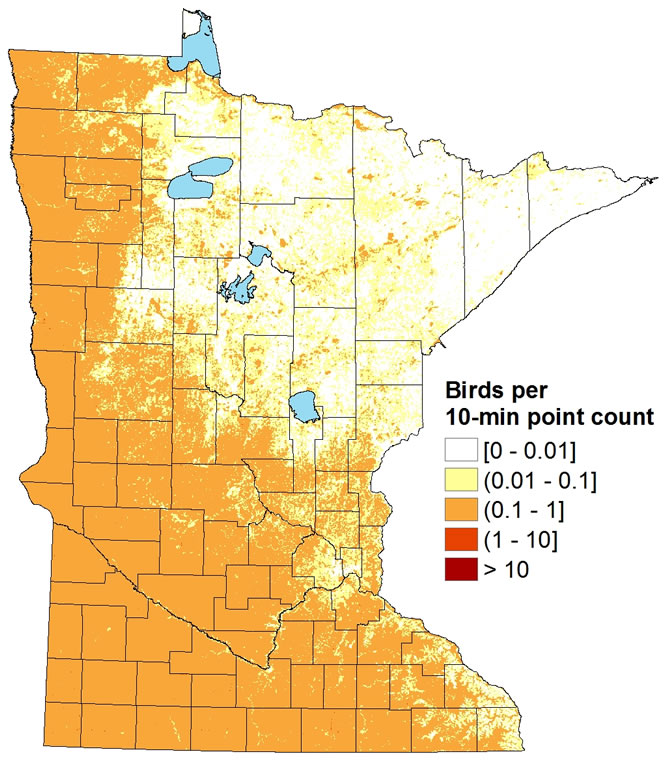 Predicted breeding distribution (birds detected per 10-minute point count) of the Killdeer in Minnesota based on habitat, landscape context, and climate data gathered during the Minnesota Breeding Bird Atlas (2009-2013) using the General Linear Modeling method without an adjustment for detectability.

Historically, the Killdeer probably was most prominent on the open, sparsely vegetated areas that followed fires and floods or in gravel and sandbar habitats bordering rivers, lakes, and estuaries. Although it continues to use these habitats, the Killdeer has adapted to a wide range of modified landscapes that provide the most critical features: low, sparse vegetation (usually less than 0.1 m in height) with an open vista in all directions (Figure 5) (Jackson and Jackson 2000). Rocks or pebbles may be present but are not essential. Nests located close to water are usually more successful (Kaufman 1996). As a result, lawns, golf courses, parking lots, city parks, and gravel pits are among the wide range of habitats now utilized by the Killdeer. Habitats within 200 m of MNBBA point counts where the Killdeer was detected were predominantly croplands followed by upland grasslands and wet meadows (Figure 6). 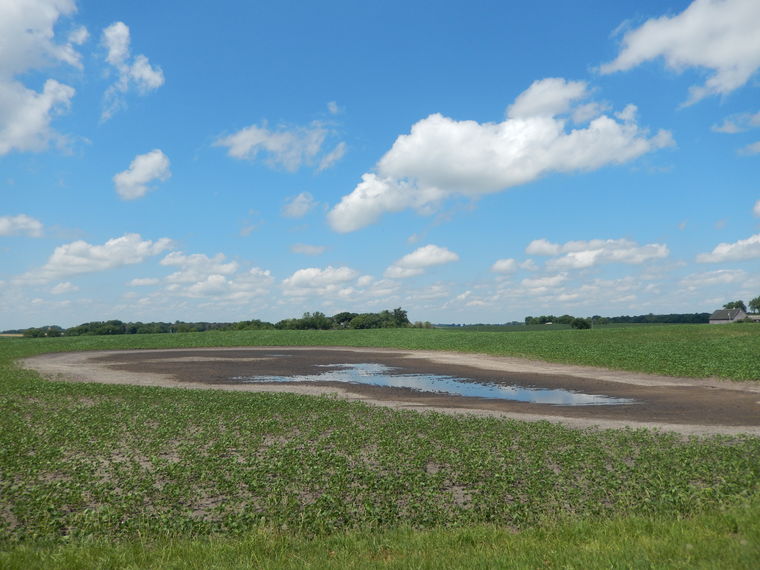 Typical breeding habitat of the Killdeer in Minnesota (© Lee A. Pfannmuller).

Habitat profile for the Killdeer based on habitats within 200 m of point counts where the species was present during the Minnesota Breeding Bird Atlas (2009-2013).

The establishment of national shorebird conservation plans in the United States and Canada nearly 20 years ago prompted the first comprehensive effort to assess the population sizes of all North American shorebirds. Long-term surveys and monitoring efforts are limited, so the initiative is primarily comprised of a review of published reports and papers and unpublished data by shorebird biologists. The U.S. Shorebird Conservation Plan Partnership provided the first estimates in 2001, establishing an approximate population size of one million Killdeers in the United States and Canada (Brown et al. 2001). That estimate was upheld in a 2006 update (Morrison et al. 2006) but was doubled six years later when another update increased the estimate to two million birds (Andres et al. 2012). In this latest review, the authors comment that even this estimate may be conservative.

Although a statewide estimate is not available for Minnesota, densities vary across the state, ranging from the highest densities in the southwest to relatively low population densities in the northeast and north-central regions, as both Figures 1 and 3 illustrate. An average of 15 to 16 birds are observed on federal Breeding Bird Survey (BBS) routes in the state each year; this compares to an average abundance of 27 in North Dakota and 23 in South Dakota (Sauer et al. 2017).

From 1966 to 2015, BBS data demonstrated a slow, statistically significant population decline of 1.09% per year throughout the entire BBS survey area. The decline, however, was considerably steeper in Canada, where it averaged 3.00% per year, compared to 0.49% per year in the United States (Sauer et al. 2017). Minnesota has mirrored the declining trend in the United States, with a significant annual decrease of 0.98% since 1967; the decline has even accelerated since 2005 to 1.64% per year (Figure 7).

The only large regions where populations are increasing are in the Eastern Tallgrass Prairie, from Iowa and northern Missouri east to Ohio, and in the southeastern United States from Virginia south to northern Florida (Sauer et al. 2017). Factors responsible for the overall decline are not well understood. The use of pesticides in many modified habitats utilized by the Killdeer, such as lawns, cultivated fields, and golf courses, may be responsible for some local declines. For instance, several studies have demonstrated the species’ susceptibility to a variety of chemicals used to control insects (Jackson and Jackson 2000).

Russell and his colleagues also cite the loss of isolated wetlands due to more intensive agricultural practices, such as tiling, that has contributed to the species’ decline. They noted that adding only one small (0.1–0.4 ha) seasonal wetland per square mile could actually double breeding populations in the Midwest (Russell et al. 2016). 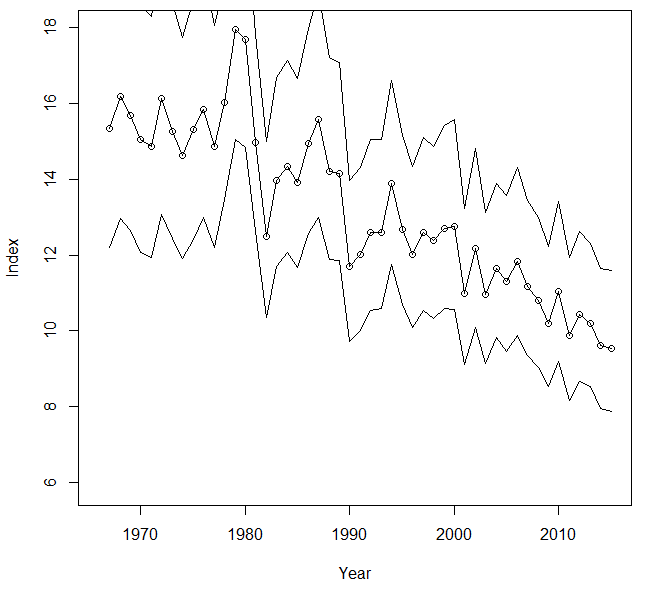 Breeding population trend for the Killdeer in Minnesota for 1967–2015 based on the federal Breeding Bird Survey (Sauer et al. 2017).

Given its broad distribution across North America and even portions of Central and South America and its relatively large population size, the Killdeer has been ranked as a Species of Moderate Concern by the U.S. Shorebird Conservation Plan Partnership (2016). Partners in Flight has assigned it a Continental Concern Score of 9/20 (Partners in Flight 2017). Although the Federal Breeding Bird Survey documents a declining population trend, it is still considered a relatively common species. The Killdeer is not state-listed in Minnesota or considered a Species in Greatest Conservation Need. Its response to climate change has not been closely examined, but a 2010 assessment initially ranked its vulnerability as low (North American Bird Conservation Initiative 2010).