A regular breeding resident, migrant, and likely winter resident. Targeted searches by Hertzel and Hertzel (2000) during the winters of 1998–1999 and 1999–2000 strongly indicated overwintering of Long-eared Owls in the southern third of the state. The Long-eared Owl was a rare species during the Minnesota Breeding Bird Atlas (MNBBA).

The Long-eared Owl is a very widely distributed species that occurs across North America, Eurasia, and in parts of Africa, the Azores, and the Canary Islands. The species’ breeding range in North America extends from the Maritime provinces to British Columbia, south in the Rocky Mountains to Arizona and New Mexico, and the northern tier of U.S. states from Colorado to southern Minnesota, and east to New York State.

Assigned a Continental Concern Score of 13/20 and designated a Yellow Watch List species by Partners in Flight.

Stick nest in a tree made by another species, such as an American Crow, a Common Raven, or another raptor, and occasionally on the ground or in a tree cavity. 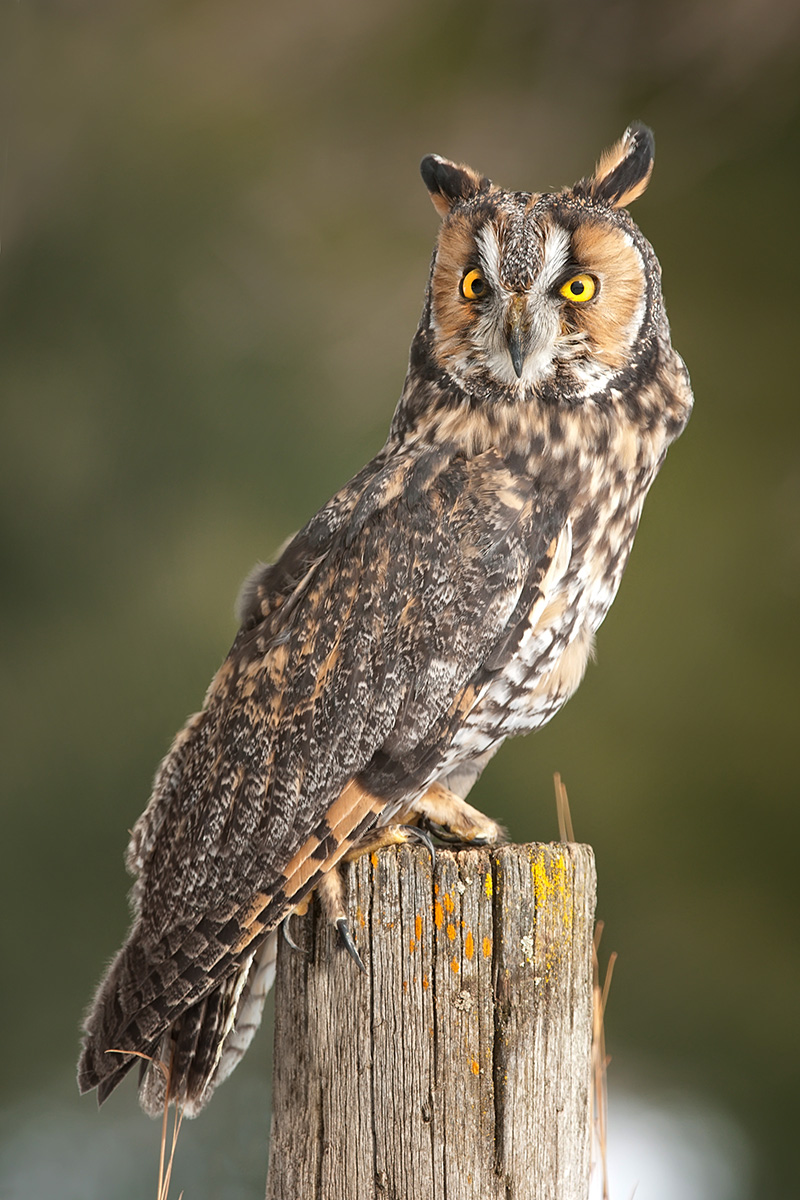 Roberts (1932) described the Long-eared Owl as “common” and a generally distributed summer resident throughout the state. He cited evidence that it was a permanent resident in the southern portions of the state but only a summer resident in the northern forested areas. Confirmed nests with eggs were found from 1888 to 1922 in Hennepin, Isanti, Meeker, Polk, and Roseau Counties. Inferred nesting with only the nest observed was recorded in Goodhue and Stearns Counties. Roberts noted that the Stearns County nest was empty, but the “female contained an egg almost ready to be deposited.”

In contrast with Roberts, Green and Janssen (1975) described a more restricted summer distribution. They wrote that Long-eared Owls were “resident throughout the wooded portions of the state” but not known to nest on the prairie or even in the wooded valleys, except in the northwestern region near Ada, Norman County, and Crookston, Polk County. No nesting records were included.

Johnson (1982) summarized 51 nesting records from 1878 to 1981. He listed 22 counties with nesting records, including the following not included by Roberts (1932): Aitkin, Becker/Otter Tail, Cass, Crow Wing, Dakota, Hubbard, Marshall, Mille Lacs, Morrison, Norman, Ramsey, Sherburne, St. Louis, Washington, and Watonwan. Johnson noted that the Becker/Ottertail County record was too vague to identify the county because the 1932 record was reported simply as “near Frazee; a city near the county line.”

Janssen (1987) described the Long-eared Owl’s distribution as the “heavily wooded portions of east-central, central, north-central, and portions of the northwestern regions.” Areas along the Minnesota River floodplain from Nicollet County to Big Stone County were also included in his distribution map. He reported that there were no records of nesting from the prairies in the west-central, southwest, or south-central regions. He stated that its status in the southeastern portion is unknown but that it is assumed to be a nesting species in that region. Janssen included confirmed nesting since 1970 in 10 counties, of which Stearns County was a new county not included in Johnson (1982). In their 1998 updated map, Hertzel and Janssen included 11 counties with confirmed nesting since 1970. They did not include the Watonwan County record but added a new county nesting record in Kandiyohi County. The Minnesota Biological Survey reported only 1 breeding season location, but it was from a county not previously mentioned, southeastern Douglas County (Minnesota Department of Natural Resources 2017).

Participants in the MNBBA reported 34 records within 28 of the surveyed blocks. The distribution of blocks was patchy with a majority of the blocks (54%, 15/28) in Lake and St. Louis Counties (Figures 1 and 2; Table 1). Most of the rest were from northwestern Minnesota (Beltrami, Clearwater, Kittson, Marshall, Norman, and Roseau Counties). Single locations were in Morrison and Todd Counties in central Minnesota, and in Houston, Olmsted, and Winona Counties in southeastern Minnesota. Two confirmed nesting records were included from southern Lake County and north-central St. Louis County.

The Long-eared Owl, being nocturnal, cryptically plumaged, and not particularly vocal, can be difficult to observe or hear. In addition, vocalizations occur primarily from February to March and at night, when the number of observers is limited. Johnson (1982) underscored his opinion that this species is more abundant than current nest and sight records reveal because of its short spring singing period and its nocturnal habits. Eckert (1978) noted that when the Long-eared Owl is foraging at dusk in open meadows, it may be misidentified as a Short-eared Owl. The higher number of detections in Lake and St. Louis Counties was primarily due to efforts by persistent individuals with exceptional field skills, Dave Grosshuesch and Jim Lind in Lake County, and Steve Wilson in St. Louis County.

In their review of the Long-eared Owl in North America, Marks et al. (1994) commented on the lack of data to assess historical changes in the species’ distribution. The cumulative nesting records of the Long-eared Owl in Minnesota indicate the species has a wide distribution within the state, ranging throughout the wooded portions, and having a scattered presence in more open landscapes, where forest patches, riparian forests, and coniferous patches such as pine plantations exist. The breeding distribution map presented by Janssen (1987) likely represents where the species was historically found and is still present today.

The paucity of observations of the Long-eared Owl in Minnesota is similar to the results of breeding bird atlases in Wisconsin (Cutright et al. 2006), Michigan (Chartier et al. 2013), and Ontario (Cadman et al. 2007). For example, during Wisconsin’s breeding bird atlas from 1995 to 2000, participants documented 5 confirmed nesting records, which were widely scattered throughout the central and southern portions of the state (Cutright et al. 2006). In contrast, the Manitoba Breeding Bird Atlas (Bird Studies Canada 2017) recorded a substantial number of Long-eared Owl records in the southeastern portions of the province during their recent atlas from 2010 to 2014. Unfortunately, as articulated by Neri and Mackentley (in Chartier et al. 2013) in their summary of the Long-eared Owl in Michigan, “a true understanding of the Long-eared Owl’s status as a breeder is likely to remain elusive for the foreseeable future.” It is likely that this scenario will be true for Minnesota as well unless targeted search efforts for breeding are completed, such as the winter effort carried out by Hertzel and Hertzel (2000) in southern Minnesota. 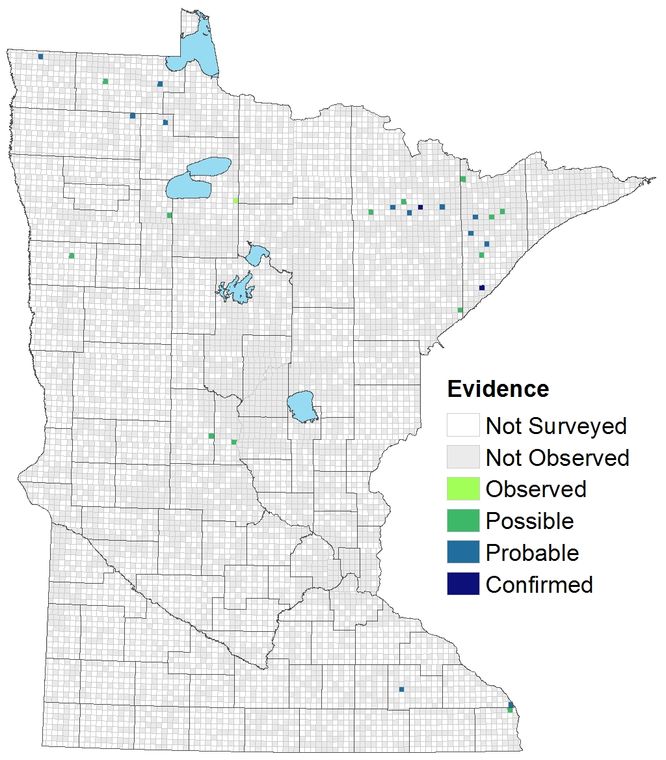 Breeding distribution of the Long-eared Owl in Minnesota based on the Breeding Bird Atlas (2009 – 2013).

Summary statistics of observations by breeding status category for the Long-eared Owl in Minnesota based on all blocks (each 5 km x 5 km) surveyed during the Breeding Bird Atlas (2009-2013).

Summary statistics for the Long-eared Owl observations by breeding status category for all blocks and priority blocks (each 5 km x 5 km) surveyed during the Minnesota Breeding Bird Atlas (2009-2013).

Roberts (1932) described the haunts of the Long-eared Owl as “tamarack swamps, alder and willow thickets, and other low-lying wooded areas.” Marks et al. (1994) described highly variable breeding habitat use but emphasized “dense vegetation adjacent to grasslands or shrublands; also open forests.” They suggested that forests are primarily used for nesting and roosting and may not be its primary habitat. Armstrong (1958) in Michigan found the owl occurred in both deciduous and coniferous forests close to open meadows. Niemi and Hanowski (1992) summarized breeding habitats as coniferous and mixed coniferous-deciduous forests, especially near water (Figure 3). They also noted red and jack pine plantations and windbreaks as important habitats in agricultural landscapes. Jones (2000) reported a nest he found on the ground in a small tamarack-alder bog in Aitkin County. 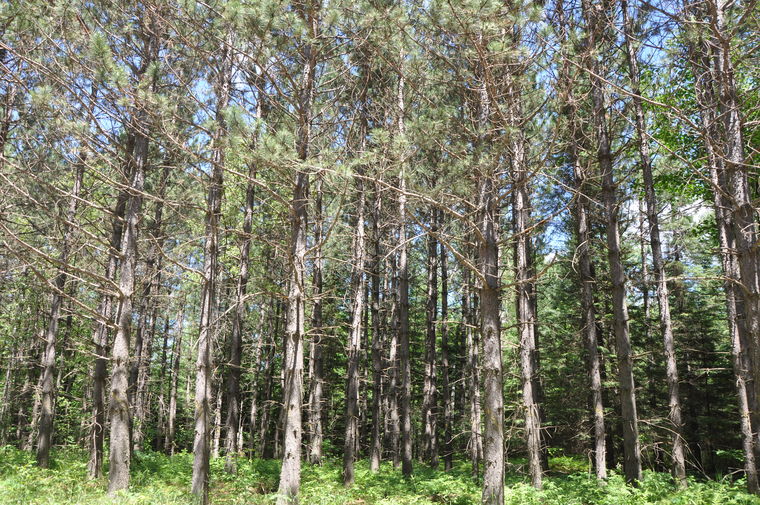 Detecting trends for the Long-eared Owl was also elusive. The federal Breeding Bird Survey (BBS), a consistent, standardized method for estimating breeding bird trends since 1966, did not report results for this species (Sauer et al. 2017). However, Rosenberg et al. (2016) estimated that the species has declined by 5.93% per year, for a cumulative loss of 91% from 1970 to 2014. Environment Canada (2014) suggested that the population has had a moderate decline since 1970, based on Christmas Bird Counts.

Marks et al. (1994) emphasized the difficulty of determining trends for the Long-eared Owl but presented quantitative evidence for population declines in California, New Jersey, and Minnesota. They presented the results of long-term monitoring of fall banding at Hawk Ridge in Duluth, Minnesota, from 1976 to 1993, which suggest a steady decline in the number of Long-eared Owls caught per 1,000 net hours. Evans et al. (2012) reported that a total of 2,243 Long-eared Owls were captured and banded from 1972 to 2009; the average number was 59 per year. Overall, the number of Long-eared Owls captured was relatively consistent from 1974 to 2009. The largest number (164) captured was in 1978, and the lowest (9) in 1999. Prior to 1991, there were 6 years when over 111 were captured, but since that time the number has been lower than 63.

Climate change has been recognized as an important threat to the Long-eared Owl (Rosenberg et al. 2016). Langham et al. (2015) and the National Audubon Society (2015), in their review of nearly 600 bird species, identified the owl as “climate endangered.” They predicted a 73% loss of its current winter range and a concerning loss of riparian nest sites in the western United States.

In his review of the Long-eared Owl, Holt (1997) stated that in most cases “there were insufficient data to convincingly conclude which factors influence population trends.” He summarized a variety of studies that attributed declines to habitat alteration, forest succession, urbanization, competition with Great Horned Owls, loss of habitat for prey species, rodenticides, shooting and habitat loss, and loss of riparian habitats and grasslands. Forestry practices such as forest removal and thinning have also been suggested as contributing factors. In contrast, he pointed out that plantations, some with exotic conifers, cemeteries, and shelterbelts, have been shown to be beneficial to nesting and roosting Long-eared Owls. He cited a study by Ulmschneider (1990) that found radio-tracked owls foraging in recent clear-cuts. Habitat loss, such as the loss of riparian woodlands and isolated tree groves, during the wintering season has been identified as a key threat to the species.

Finally, Holt noted that based on diet and the species’ morphology, Long-eared Owls were primarily a species of open country as opposed to extensive forested areas, but he suggested that additional research was needed. This understatement underscores the dire need for more information on this secretive species.