This nonnative species was introduced from Europe for its aesthetic appeal in the late 19th century and in following decades to several eastern states. The multiple introductions established breeding populations in many states, especially along the northeastern Atlantic coast, from Maine to South Carolina, and in the Great Lakes states. Smaller populations are also present in the Pacific Northwest. Early introductions that spread were from Massachusetts (1909 and 1916, Boston), New York (1910 and 1912, Hudson River and Long Island), and Maryland. On the Atlantic Seaboard, large invasive populations are now a particular problem in New York, southern New England, and the Chesapeake Bay. The Great Lakes populations are of special relevance because of potential dispersals to Minnesota. Several of these states do have viable populations that are expanding. An important introduction was in Michigan (1919, Charlevoix County, north of Grand Traverse Bay); the young birds were allowed to fly free and were not pinioned. In the 1960s and 1970s, swans were reintroduced or expanded to Ohio, Indiana, Illinois, and Wisconsin, mostly at sites along the Great Lakes shores. The nodes of concentration were for the most part along the shores of Lake Erie, Lake Michigan, and large rivers. Mute Swans are most abundant along the southern New England coast and in Michigan, eastern Wisconsin, and northern Indiana and Ohio (Figure 1).

The birds are sedentary and can establish a year-round population where there is open water that does not freeze during the winter or in urban areas where they are fed.

Feeds primarily on submerged aquatic plants; some aquatic vertebrates and invertebrates, as well as waste grain, are also ingested.

A depression within the center of a mound constructed largely of aquatic emergent vegetation; the nest is usually placed along the shoreline of a peninsula or island. 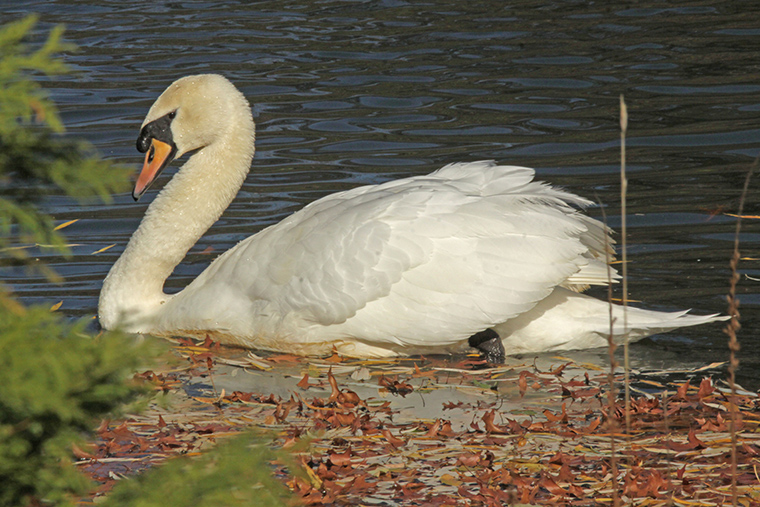 Breeding distribution and relative abundance of the Mute Swan in North America based on the federal Breeding Bird Survey, 2011–2015 (Sauer et al. 2017).

The first record of Mute Swans in Minnesota was on May 27, 1974, when 3 birds were seen on Lake Superior at Duluth, and later in June on the St. Louis River (Green 1975). Publicity surrounding those records turned up several more observations from other places on Lake Superior from Cook County (January 1975) and the Thunder Bay area in Ontario (1974) to Ashland, Wisconsin (1973, 1974). It was subsequently discovered that a feral breeding population was established in 1971–1975 in northwestern Wisconsin (Robbins 1991). In the 1980s there were yearly, mostly spring, reports from Lake Superior at Duluth. It was assumed that the birds originated from the Ashland population, and since these were “wild” birds, the Minnesota Ornithologists’ Union (MOU) Records Committee considered Lake Superior Mute Swan reports acceptable as records of wild birds (Eckert 1992). During this period of time, there was 1 breeding record at Duluth in 1988: 2 adults, nest with 1 young fledged (Wiens 1989). No viable population was established.

It has been more difficult to consider other Minnesota records as reports of wild birds. Most are classified as origin “unknown.” A compilation of Mute Swan records from the seasonal report archive for The Loon shows that observations were reported every year after 1980. They occur in all seasons: spring, 43 years; summer, 20 years; fall, 29 years; and winter, 25 years. They have been reported from 45 of Minnesota’s 87 counties; all but 7 counties are in the southern half of the state. Twenty-eight records are from south of Mille Lacs and east of Brown and Renville Counties.

Although there are nesting records from Steele (1989), Washington (2005), and Anoka (2006) Counties, there is no indication that there is a wild breeding population in the state (MOU seasonal reports). Counties with the most multiple-year records are Goodhue, Hennepin, Meeker, and Sherburne, but no evidence of a sustained population exists. Birds are assumed to be escapes or released from captive flocks or wanderers from other states. Even records from wildlife refuges do not indicate a wild breeding population; they are just as likely to be escapes or wanderers. In Minnesota, most open water freezes every winter, which constrains a sedentary species from creating a viable year-round breeding population in the wild. Another constraint is their status as unprotected under both state and federal authorities. Birds found nesting in natural habitats can be removed as a nuisance.

MNBBA records were from only 2 locations, 1 in McLeod County (July 2012), and 1 on the Minnesota River Valley National Wildlife Refuge on the border of Carver and Scott Counties (August 2009). Additional information about these two birds was available on the MOU website: the bird on the refuge (T115R23c) had been seen in the area during the previous two years, and there were multiple reports from June 20, and from August 1 through October 18 in 2009 (MOU seasonal reports); the bird in McLeod County (T117R28a) was with Trumpeter Swans and was seen multiple times. Both these records and a number of other records during the MNBBA years are on the MOU website. Mute Swan reports submitted to the MNBBA had to fit within the safe dates of May 1 and August 1; so observations outside of this window were excluded. All reports submitted to MOU before or after these dates fit the usual pattern of incidental observations from ponds, lakes, wastewater treatment plants, and near the casinos in Goodhue and Pine Counties. 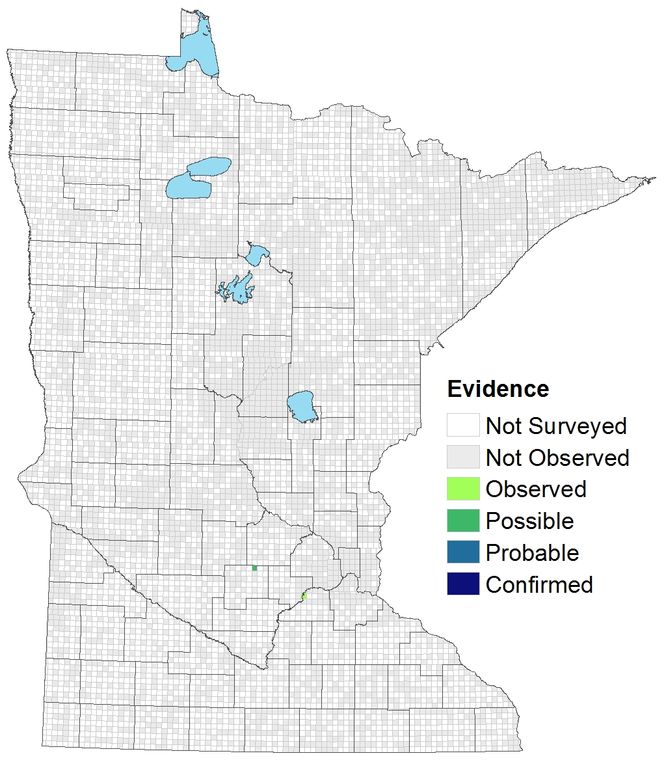 Breeding distribution of the Mute Swan in Minnesota based on the Breeding Bird Atlas (2009 – 2013).

Summary statistics for the Mute Swan observations by breeding status category for all blocks and priority blocks (each 5 km x 5 km) surveyed during the Minnesota Breeding Bird Atlas (2009-2013).

The Mute Swan’s breeding habitat is described as ponds, lakes, both inland and coastal marshes, and slow-flowing rivers (Kaufman 1996). Because the swan is a semidomesticated bird, any site with water and abundant food is likely to be sufficiently suitable. In Minnesota, there is almost no published information about the field circumstances of most records. Incidental records range from Lake Superior to small lakes and ponds. They are reported on larger rivers, such as the Mississippi and Minnesota, especially where open water is available during the winter months. Observations also have been reported on sewage lagoons, wildlife refuges, natural areas, and parks.

When Mute Swans remain in an area with good feeding habitat, their feeding can be very destructive to submerged aquatic vegetation. These large birds require 4 to 8 pounds of food a day and consume many aquatic plants, like pondweeds, common waterweed, wild celery, and wild rice. Their method of feeding, by uprooting much of the vegetation, can damage the productivity of the site. These same foods and habitats are also used by other waterfowl during the breeding season and migration. The aggressive swans, especially when they occur in flocks, can have a large impact on other swans, geese, and ducks (Baldassarre 2014).

Although Mute Swans were introduced into several eastern states in the early decades of the 20th century, the wild population did not begin to expand dramatically until the early 1990s, when it increased both on the East Coast and in the Great Lakes, particularly in Michigan. The continental population has been estimated by wildlife agencies in the second decade of the 21st century as around 25,000 birds; Michigan has the largest population of any state (Baldassarre 2014). Swans are counted on both Audubon Christmas Bird Counts and waterfowl surveys. Population increases recently have been extraordinary. Some examples of figures given by state and federal agencies are as follows: in Maryland, midwinter surveys increased from 2,145 in 2002 to 4,345 in 2006 (Ellison 2010); in Ohio, Christmas Bird Count numbers per party hour increased from 0.005 in 1998 to 0.04 in 2011 (Ohio Department of Natural Resources 2010); in Michigan, management plan estimated numbers are 500 birds in 1972, 1,000 in 1982, 2,000 in 1990, 5,700 in 2000, and 15,500 in 2010 (Michigan Department of Natural Resources 2012).

Several factors have prompted state and federal agencies to increase management of Mute Swans. Contrary to most plans, these policies focus on control rather than protection of the species. First, federal agencies changed their strategy of ignoring this feral exotic species following a 2001 lawsuit that resulted in a ruling that the Mute Swan is not a protected species under the Migratory Bird Treaty Act. As a result, the federal government does not have regulatory authority over the swan, and management control is the responsibility of the states. Second, the desirability of control was made obvious by field observations that showed increasing Mute Swan populations were having a detrimental effect on wetland ecology. They were competitors with the native Trumpeter Swan, water quality was damaged by their feeding activity, and their aggressive behavior could injure a person. Lastly, wildlife agencies recognized their responsibility and established a structure to implement controls through organized working groups, management plans, and cooperative agreements.

Because of the appeal of this beautiful and partly tame bird to the general public, direct control methods, such as shooting birds, cause great controversy. Most acceptable control activities, such as destroying eggs or small young, although used, are not very effective in stopping population expansions because the adults are long lived. Another approach has been educational efforts to demonstrate to the general public that this invasive swan causes effects detrimental to other, native waterfowl and to make it clear that management agencies have the authority for control. Some physical control activities have been implemented where appropriate. Minnesota has taken the approach that preventing the establishment of a Mute Swan breeding population is critical. In 1996, the Minnesota Legislature defined this bird as “Unprotected” (MN Statutes 97A.015, Subd.52). They also have been classified as “a regulated invasive species whose introduction into the wild is prohibited. Possession of captive birds requires a state game farm license and fencing to contain them” (Minnesota Department of Natural Resources 2016). There is no explicit state management plan for the Mute Swan.