A regular breeding resident and migrant; regular in the winter months at scattered locations in southern Minnesota. The Northern Shoveler was an uncommon species during the Minnesota Breeding Bird Atlas (MNBBA).

Although it has a global distribution, in North America the Northern Shoveler is primarily a species of the northern Great Plains and Canadian Prairie Provinces (Figure 1). Smaller populations occur further east, in states and provinces bordering the Great Lakes and the St. Lawrence River, and in western North America from Texas and New Mexico north to central Alaska.

A game species, the Northern Shoveler is designated a Moderate Priority at the continental level by the North American Waterfowl Management Plan. It has been assigned a Continental Concern Score of 8/20 by Partners in Flight.

A medium-distance migrant that winters along the southern coasts of the United States, south through the Caribbean and Central America.

Aquatic invertebrates (predominantly cladocerans) and seeds; strains water through its shovellike bill as it skims the water’s surface. 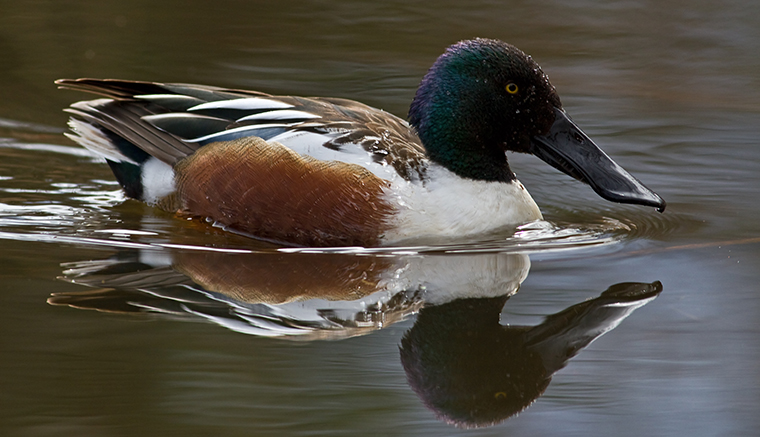 Breeding distribution and relative abundance of the Northern Shoveler in North America based on the federal Breeding Bird Survey from 2011 to 2015 (Sauer et al. 2017).

In 1932 Roberts described the Northern Shoveler as “a common breeding Duck in almost all parts of the state” and “one of the commonest nesting ducks at present.” Confirmed nesting records (nests with eggs), however, were only available from 2 counties, Hennepin and Polk, while other evidence of breeding (broods or reports of nesting) was reported from just the three widely separated counties of Cook, Jackson, and Marshall. Despite Roberts’s sweeping statement about the Northern Shoveler’s broad distribution, one has to wonder how prevalent the species was in the forested regions north and east of the Prairie Parklands.

When Roberts published his account of the Northern Shoveler in 1932, the species had already rebounded, like so many other waterfowl, from a rather dramatic decline in the late 1800s caused largely by unregulated harvesting. In 1898 one long-time observer at Heron Lake wrote, “Once very common and breeding everywhere here but now rarely found nesting in this locality.” Almost twenty years later, others would note that breeding birds were once again appearing at this renowned waterfowl lake. The Northern Shoveler’s recovery, however, must have been quite slow. In 1946 the summer seasonal report for the Minnesota Ornithologists’ Union reported that although the Northern Shoveler was said to be one of the most common nesting waterfowl species in the state, it had only been reported in two of the previous six years (Minnesota Ornithologists’ Union 2016).

More than 40 years after Roberts wrote his treatise on Minnesota birds, Green and Janssen (1975) described the Northern Shoveler as a summer resident restricted primarily to the western and south-central regions of the state. The species was scarce in the southeast and in the northern forested regions. Although two more nesting records had been documented in northeastern Minnesota (one in Itasca County in 1949 and one in Aitkin County in 1972), those records represented single occurrences of breeding pairs. Janssen described the same breeding range in his 1987 update and added St. Louis County to the list of northeastern counties where nesting had been confirmed. He delineated 13 counties where nesting had been confirmed since 1970; all but 4 (Aitkin, Cook, Itasca, and St. Louis) were within the species’ primary breeding range. Hertzel and Janssen (1998) provided an update to Janssen’s list of counties with confirmed nesting. Two counties identified by Janssen were deleted (Cook and Itasca) and 3 were added (Kittson, Polk, and Stevens).

To date, the Minnesota Biological Survey has documented a total of 85 breeding season locations for the Northern Shoveler (Minnesota Department of Natural Resources 2016). All but a handful of records were located in the Prairie Parkland and Tallgrass Aspen Parklands Provinces. Seven records were documented in the Laurentian Mixed Forest Province in northeastern and north-central Minnesota, with locations as far east as central St. Louis County.

During the MNBBA, participants reported 314 Northern Shoveler records from 5.1% (244/4,740) of the surveyed atlas blocks and from 4.7% (110/2,337) of the priority blocks. Breeding was confirmed in 11 (0.2%) of the surveyed blocks (Figures 2 and 3; Table 1). The species was reported from 57 of Minnesota’s 87 counties (Cass County was included because of a block that straddled Cass and Itasca Counties) and was confirmed breeding in 10 counties. With the exception of 1 breeding record in Pine County, all the breeding records were in far western Minnesota, from Roseau County in the northwest to Murray County in the southwest. Seven of the counties were new to the list published by Hertzel and Janssen in 1998: Chippewa, Clearwater, Lac qui Parle, Murray, Otter Tail, Pine, and Roseau. All reports were of fledged young. Overall, the largest number of records was from west-central Minnesota.

Over the years, the Northern Shoveler has been reported during the summer months from every county in Minnesota but is least common in the far southeastern counties and in north-central and northeastern Minnesota (Minnesota Ornithologists’ Union 2016). The species’ rarity in southeastern Minnesota continued through the MNBBA period. Although records in the Laurentian Mixed Forest Province were sparse, the region did report 28 records, including 7 in St. Louis County and 10 in Itasca County. The apparent increase in records further east in Minnesota could represent a gradual reoccupation of areas where the species was formerly more common, as Roberts (1932) implied. Indeed, Dubowy (1996) commented that the Northern Shoveler may have bred east of its current distribution in years past. The species also has demonstrated a tolerance for wastewater treatment lagoons. Of the 6 atlas blocks where the Northern Shoveler was reported in St. Louis County, 3 had wastewater treatment ponds and 1 included a former mine pit filled with water. Atlas blocks where the Northern Shoveler was reported in Itasca County, however, had no wastewater treatment ponds or mine pits; all atlas blocks had natural wetlands.

Looking elsewhere within the species’ breeding range, Dubowy (1996) noted the shoveler’s presence as a breeding species in eastern Canada is relatively recent and may be due to the “proliferation of sewage-treatment plants.” Cadman et al. (2007) noted that although it may appear as a recent addition to Ontarios’ avifauna, populations nesting along the province’s northern coasts may have simply been missed by early ornithologists. Today the species can be found throughout southeastern Ontario as well as in scattered locations throughout the Hudson Bay lowlands and the Northern Shield. 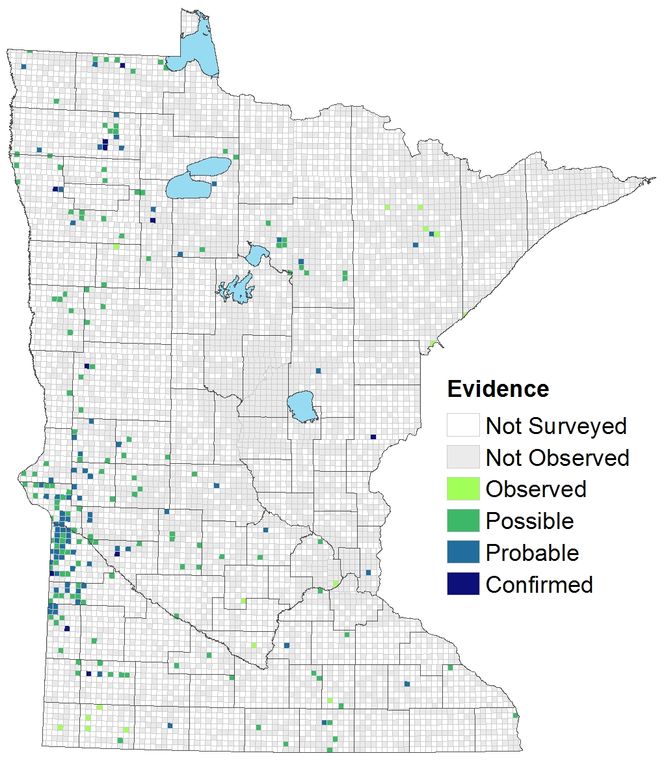 Breeding distribution of the Northern Shoveler in Minnesota based on the Breeding Bird Atlas (2009 – 2013).

Summary statistics of observations by breeding status category for the Northern Shoveler in Minnesota based on all blocks (each 5 km x 5 km) surveyed during the Breeding Bird Atlas (2009-2013).

Summary statistics for the Northern Shoveler observations by breeding status category for all blocks and priority blocks (each 5 km x 5 km) surveyed during the Minnesota Breeding Bird Atlas (2009-2013).

The majority of nests are located in upland cover adjacent to wetlands. Most nests are located within 50 m of water in short-cover vegetation, including pastures, hayfields, and grasslands (Poston 1969; Miller and Collins 1954). 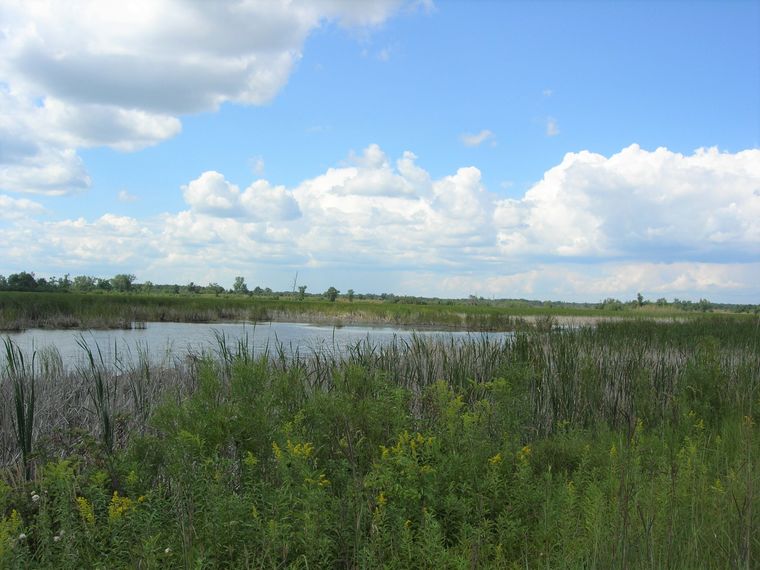 The Waterfowl Breeding Population and Habitat Survey is the gold standard for monitoring waterfowl populations in the United States and Canada. It focuses on two large areas: the Prairie Pothole Region of the United States and Canada (known as the Traditional Survey Area) and the eastern Canadian provinces and the state of Maine (known as the Eastern Survey Area). Minnesota is not included in either area. However, the survey conducted in the Traditional Survey Area is considered the benchmark regarding the status of all grassland-nesting waterfowl species.

In 2015, the survey estimated the continental breeding population of the Northern Shoveler at 4.4 million birds (Zimpfer et al. 2015). This estimate represents a decrease of 17% from the 2014 breeding season but a 75% increase above the long-term average of 2.5 million birds (1955-2014). It also is significantly higher than the continental goal of 2.0 million birds established by the North American Waterfowl Management Plan (2004). Throughout the Traditional Survey Area, Northern Shoveler numbers remained fairly steady until the late 1990s, when numbers began to surge upward (Figure 5). This upward trend is in keeping with what has been observed for many other waterfowl species that are dependent on the Prairie Potholes in the United States and the Prairie Parklands in Canada. Improved precipitation patterns that began in the 1990s, in concert with an increased focus on conservation, are likely responsible.

Despite this hopeful outlook for the continental population, data from Minnesota suggest a different picture. The Minnesota waterfowl survey, conducted since 1968 in the central and western regions of the state, demonstrates wide fluctuations with an overall downward trend in numbers. Since 1987 peak numbers were reported in 1990 (26,545) and in 2000 (26,175) but have remained relatively low since that time (Figure 6). The federal Breeding Bird Survey (BBS) shows a nonsignificant declining population in Minnesota (−0.51% per year since 1967), although the species is uncommon enough that the roadside BBS may not be a reliable index of the species’ statewide population trend (Sauer et al. 2017).

The Northern Shoveler comprises less than 2% of the total duck population in Minnesota. Its overall declining population trend, however, is similar to that for many ducks in the state (Cordts 2015). 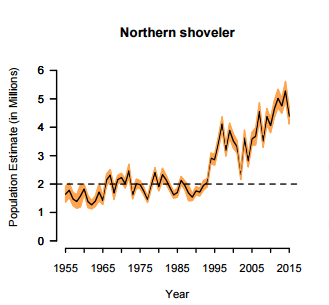 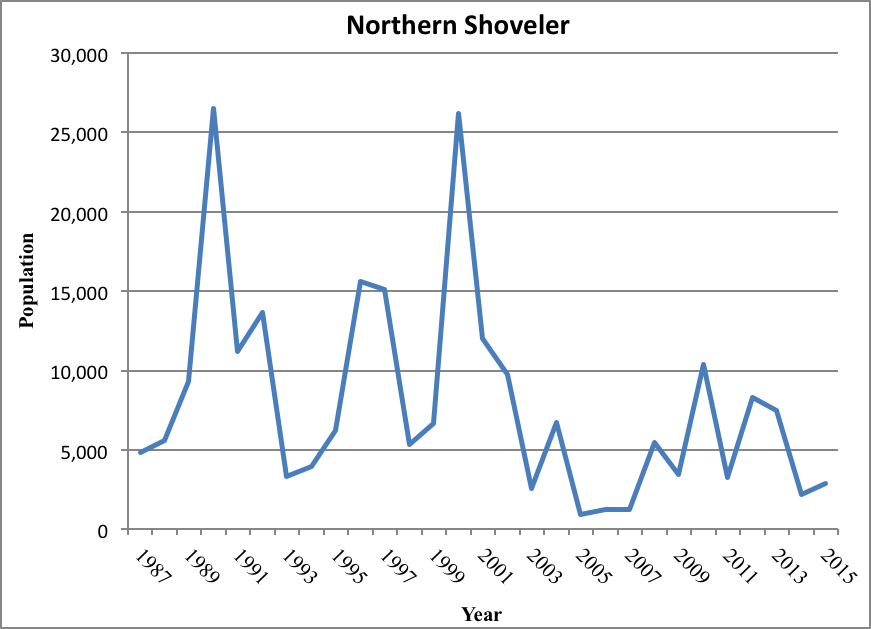 Northern Shoveler numbers reported during the Breeding Population Waterfowl Survey for Minnesota, 1987–2015 (data not corrected for visibility; taken from data presented in Cordts 2015).

The Northern Shoveler has been designated a species of “moderate priority” by the North American Waterfowl Management Plan (2004). Only one waterfowl species that depends on the Prairie Potholes received a rating lower than this, the Ruddy Duck. Many species, such as the Mallard, were rated higher. It has been assigned a moderately low Continental Concern Score of 8/20 by Partners in Flight (2017).

The Northern Shoveler is a harvested species, but it is not highly sought by waterfowl hunters. In 2015, it comprised approximately 8.8% of the duck population in North America (minus scoters, mergansers, Wood Ducks, eiders, and Long-tailed Ducks) (Zimpfer et al. 2015) and accounted for only 5.0% of the total harvest in the fall of 2015 (Raftovich et al. 2016). Minnesota’s Northern Shoveler harvest in 2015 (8,240 birds) comprised less than 2% of the total shoveler harvest in the United States (544,376 birds).

Like many waterfowl dependent on the shallow wetlands of the Prairie Pothole Region, the impact of climate change is a major concern for the future of the Northern Shoveler, which reaches its highest breeding densities in the northern Great Plains. The State of the Birds 2010 Report on Climate Change (North American Bird Conservation Initiative 2010) drew specific attention to this issue. The wetlands in the Prairie Pothole Region produce 50%–80% of the continent’s waterfowl, but climate models predict that the number of wetlands in the region could decline by more than 60%. Indeed, a recent analysis of the potential impacts of climate change on nearly 600 North American birds by the National Audubon Society predicted that the Northern Shoveler could lose 75% of its current breeding range by the year 2080, with few opportunities to expand further north (Langham et al. 2015; National Audubon Society 2016). This analysis led to the classification of the species as “climate endangered.”

Much of the conservation work in Minnesota is focused on the waterfowl community as a whole. Minnesota’s Long Range Duck Recovery Program, launched in 2006, is designed to reverse the decline of all waterfowl populations by restoring and protecting an additional two million acres of habitat by 2056 and attaining a statewide population of one million birds (Minnesota Department of Natural Resources 2006). This represents a 100% increase over the 2014 estimate of 489,000 birds. In addition, the Minnesota Prairie Conservation Plan, begun in 2011 (Minnesota Prairie Plan Working Group 2011), is another ambitious effort to protect, restore, and manage grasslands and wetlands throughout western Minnesota. At the state and local levels, these efforts are essential for the future of all wetland-dependent species.