A regular breeding resident and migrant; 1 winter record in December 2002. The Northern Waterthrush was an uncommon species during the Minnesota Breeding Bird Atlas (MNBBA).

Distributed across Alaska and Canada; in the United States the species’ breeding range dips south into northern Idaho and western Montana and through the Great Lakes region and New England, south to Virginia. A few small, scattered populations occur elsewhere in the western states. The Northern Waterthrush is sparsely distributed throughout its breeding range; the highest breeding densities in the federal Breeding Bird Survey (BBS) survey area occur in British Columbia and Newfoundland (Figure 1).

Long-distance migrant that winters in the Caribbean, Central America, and northern South America.

Aquatic invertebrates and terrestrial insects secured by foraging on the ground and in shallow pools, gleaning forest vegetation, and occasionally hovering and hawking.

An open-cup nest nestled in a small cavity in the upturned roots of a downed tree, at the base of a clump of ferns, or under a riparian embankment. 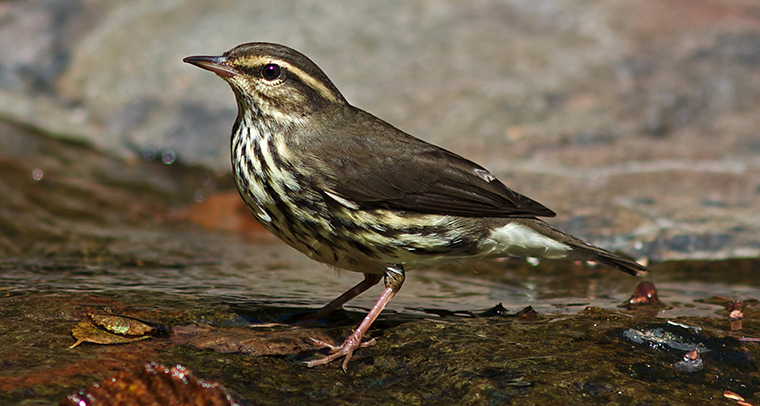 Breeding distribution and relative abundance of the Northern Waterthrush in North America based on the federal Breeding Bird Survey, 2011–2015 (Sauer et al. 2017).

A characteristic species of Minnesota’s northern forests, the Northern Waterthrush was described by Roberts (1932) as locally common throughout the coniferous and mixed forests of the northern counties, occurring as far west as Itasca State Park and as far south as Aitkin County. Although a nest had yet to be found when Roberts published the first edition of his two-volume treatise The Birds of Minnesota, there were 3 reports of inferred breeding in Itasca County: in 1923 and 1930 adult birds were seen carrying food near Island Lake, and in 1930 an adult bird was observed feeding a young bird at Otter Lake. It would be the summer of 1934 before the first nest was found, at Caribou Lake in Cook County (Roberts 1936).

At the time of Roberts’s writing, two different subspecies were recognized: Grinnell’s Waterthrush (Seiurus noveboracensis notabilis), which occurred north and west of northern Michigan; and the Northern Waterthrush (S. n. noveboraciensis), which occurred in the eastern United States and Canada. It was Grinnell’s Waterthrush that occurred throughout Minnesota, although Roberts acknowledged some specimens had the yellower plumage of the eastern race. Today these two subspecies are no longer recognized, and the Waterthrushes, originally considered related to Ovenbirds (Seiurus aurocapilla), were recently placed in their own genus, Parkesia (Chesser et al. 2010; Whitaker and Eaton 2014).

When Green and Janssen (1975) published their updated account of the species decades later, its primary breeding range remained in north-central and northeastern Minnesota, basically north and east of a line between Duluth and Leech Lake. There were scattered records outside of this region, including reports as far south as the St. Croix River in Pine County and as far west as Clearwater County. Nesting, however, had been confirmed only from the Arrowhead counties of St. Louis, Lake, and Cook.

In his 1987 update, Janssen reported new summer reports from the Cedar Creek Ecosystem Science Reserve in Anoka County. In the summer of 1979 an adult was seen carrying food at the site (Green 1980), and birds were reported in several subsequent field seasons as well. Finding waterthrush nests, however, was difficult. By 1987, no confirmed breeding records had been documented since 1970 (Janssen 1987). When Hertzel and Janssen (1998) published an updated account of all counties where Minnesota’s breeding birds had been confirmed nesting since 1970, only 1 county was identified for the Northern Waterthrush: St. Louis County.

Field surveys begun in the late 1980s as part of the Minnesota Biological Survey (MBS) documented what other birders were observing as well. Although the majority of the survey’s 328 breeding season locations were from the Arrowhead region, particularly Cook County, an increasing number of reports were being documented west and south of the species’ primary range. These included reports from Kittson and Marshall Counties in the northwest and farther south in Otter Tail, Douglas, Stearns, Isanti, Anoka, and Chisago Counties (Minnesota Department of Natural Resources 2016).

During the MNBBA, participants reported 876 Northern Waterthrush detections in 10.3% (489/4,736) of the surveyed atlas blocks and in 12.4% (289/2,337) of the priority blocks. Breeding was confirmed in only 10 blocks (Figures 2 and 3; Table 1). In total the birds were observed in 23 of Minnesota’s 87 counties and were confirmed breeding in 5 counties: Aitkin, Cook, Itasca, Lake, and St. Louis.  The predicted distribution map generated with MNBBA data in combination with data on habitat, landscape context, and climate, predicted the species could be found at varying breeding densities throughout the Laurentian Mixed Forest Province, as far south as southern Chisago County, and in the very eastern portion of the Tallgrass Aspen Parklands Province (Figure 4).  Moderate densities are most commonly encountered in Cook and Lake Counties while pockets of moderately high breeding densities are scattered throughout the northern forest.  Overall, however, the Northern Waterthrush is a sparsely distributed species in northern Minnesota.

Although the atlas did not report any records south of a line from Wadena County east to Pine County, earlier records by the MBS and by observers submitting reports to the Minnesota Ornithologists’ Union have clearly expanded the species’ summer range farther west and south in the past few decades. Indeed, there were reports from Hennepin County in 2009 and 2010, and the species continues to be seen regularly at two sites in Anoka County: Boot Lake Scientific and Natural Area, and the Cedar Creek Ecosystem Science Reserve (Minnesota Ornithologists’ Union 2016).

Between the breeding-ranges of the Southern, or Louisiana, and Grinnell’s Water-Thrushes there is thus a wide stretch of country in Minnesota where there are no representatives of either species during the nesting-season.

Today, although the species occupy different habitats, their ranges overlap in a small region of east-central Minnesota, from southern Pine County south through Chisago County. Farther east, in Wisconsin, Northern Waterthrushes were reported as far south as the Wisconsin River (near Prairie du Chien) during the state’s first atlas (Cutright et al. 2006). The possibility of misidentifying the two species has to be considered. Not only are the two species difficult to distinguish physically, their songs are remarkably similar as well. Nevertheless, during the first two years of Wisconsin’s second atlas, Northern Waterthrush reports have been common along the St. Croix River south of Hinckley, Minnesota, and throughout portions of central Wisconsin that are at the same latitude as the Twin Cities as well as at locations farther south (eBird 2017). The possibility of encountering Northern Waterthrushes farther south in Minnesota cannot be discounted. Overall, however, there have been few changes along the southern periphery of the species’ breeding distribution in the central or eastern United States (Whitaker and Eaton 2014). 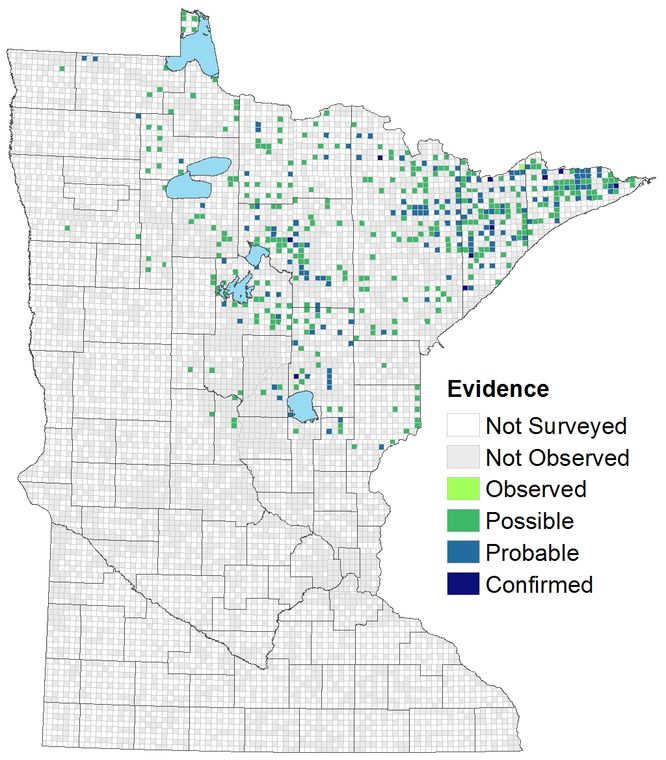 Breeding distribution of the Northern Waterthrush in Minnesota based on the Breeding Bird Atlas (2009 – 2013).

Summary statistics of observations by breeding status category for the Northern Waterthrush in Minnesota based on all blocks (each 5 km x 5 km) surveyed during the Breeding Bird Atlas (2009-2013).

Summary statistics for the Northern Waterthrush observations by breeding status category for all blocks and priority blocks (each 5 km x 5 km) surveyed during the Minnesota Breeding Bird Atlas (2009-2013). 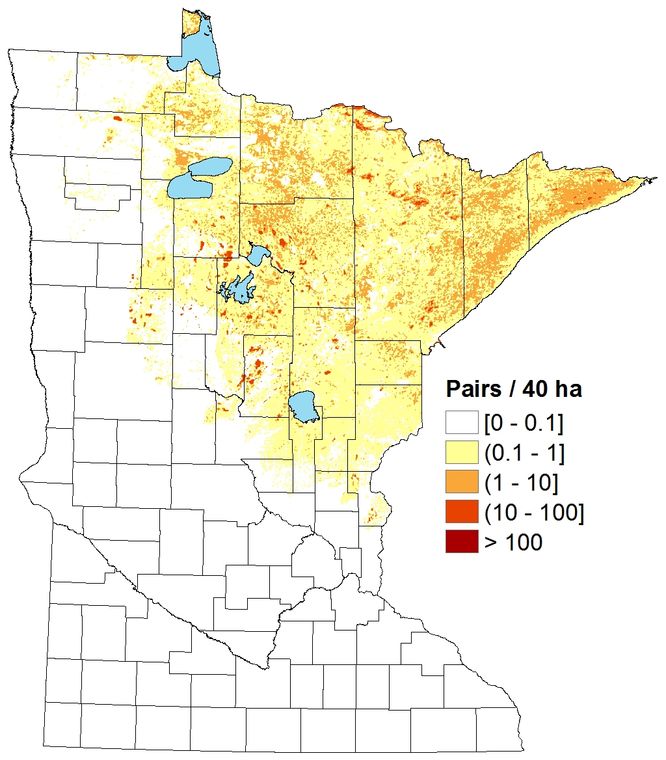 Predicted breeding distribution of the Northern Waterthrush in Minnesota based on habitat, landscape context, and climate data gathered during the Breeding Bird Atlas (2009-2013).

The Northern Waterthrush is found in wet forests or along the shorelines of lakes, rivers, and streams (Figure 5). In the northern Appalachian region, it frequents mountain streams, bordered by a lush growth of Rhododendron shrubs, and a variety of forested wetlands. Farther north, in the Great Lakes region and southern Canada, it is associated with lowland hardwoods, conifer swamps, and alder and willow thickets. Where the soils are well drained, it is restricted to the riparian zones bordering the region’s streams, rivers, and lakes (Whitaker and Eaton 2014; Danz et al. 2007). In the mid-Atlantic states, biologists found a strong association with the density of the understory foliage (0.3 to 1.0 meters), with the moisture gradient, and with the percent conifer cover in the canopy (Robbins et al. 1989); the study also found the species preferred a more open canopy. The two most important features of the species’ habitat, however, are dense ground cover and the presence of surface water (Whitaker and Eaton 2014).

At the microhabitat level, the presence of uprooted trees and jutting embankments along the shoreline provide essential nesting requirements. The waterthrush’s open-cup nest is often nestled into the small cavities or hollow areas such features provide. Downed logs along the shoreline also are used to access shallow waters for foraging (Kaufman 1996; Whitaker and Eaton 2014).

Field studies suggest the Northern Waterthrush may be an area-sensitive species. One study suggested it requires a minimum of 200 ha, and the maximum probability of finding birds occurred when sites were larger than 3,000 ha (Robbins et al. 1989). Similarly, in southern Ontario, researchers found it was more frequently encountered in extensively forest landscapes, their presence positively correlated with the proportion of forest cover within 2 km of a forest stand (Austen et al. 2001).

The National Forest Bird (NFB) Monitoring Program in northern Wisconsin and Minnesota demonstrated the Northern Waterthrush had a rather narrow tolerance of different habitats, showing a strong association with lowland hardwood and swamp conifers (Niemi et al. 2016). During the MNBBA, the strongest association within 200 m of point counts where Northern Waterthrushes were detected was with bogs, followed by upland coniferous forest (Figure 65). 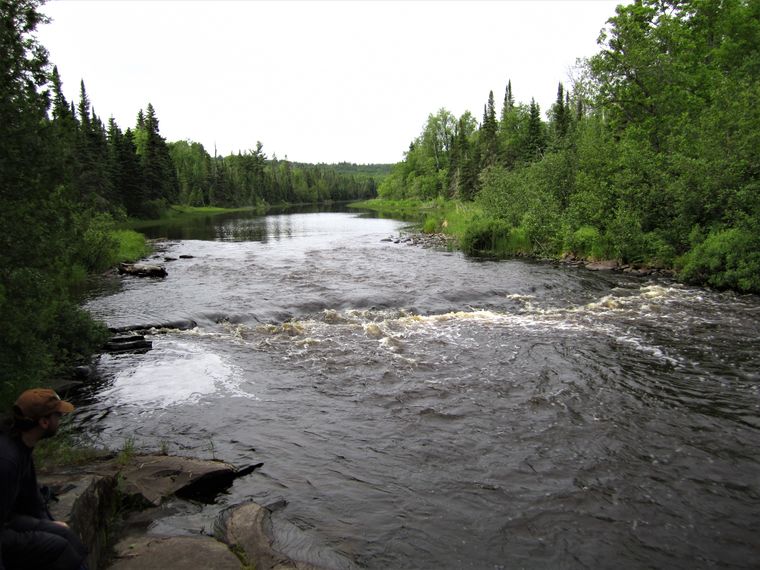 Habitat profile for the Northern Waterthrush based on habitats within 200 m of point counts where the species was present during the Minnesota Breeding Bird Atlas (2009-2013).

Survey-wide, BBS data for the Northern Waterthrush demonstrated a significant increasing population trend. From 1966 to 2015 populations increased an average of 1.19% per year; from 2005 through 2015 the rate of increase more than doubled to 2.65% per year (Figure 7). Because of the species’ relatively low abundance along BBS routes in Minnesota, statistical analyses of these data lack precision but also suggested an increasing population, particularly from 2005 to 2015 (Sauer et al. 2017). The more intensive NFB Monitoring Program on the Chippewa and Superior National Forests demonstrated a nonsignificant, albeit increasing trend on both forests (Figure 8). 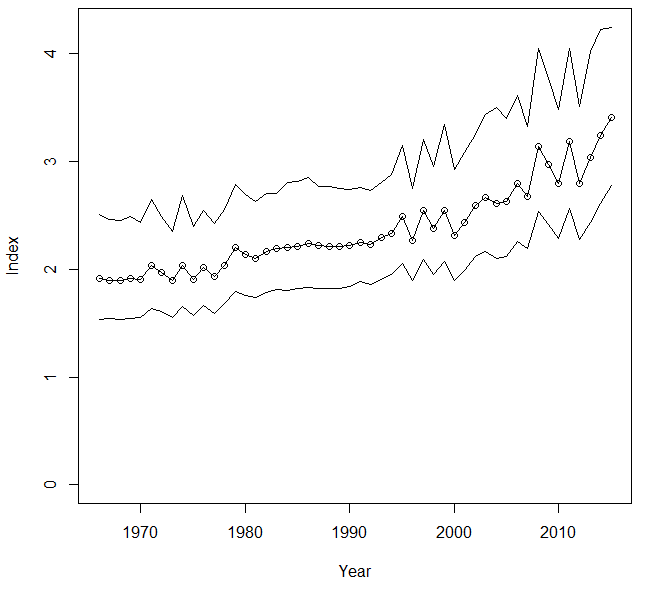 Breeding population trend for the NorthernWaterthrush in North America for 1966–2015 based on the federal Breeding Bird Survey (Sauer et al. 2017). 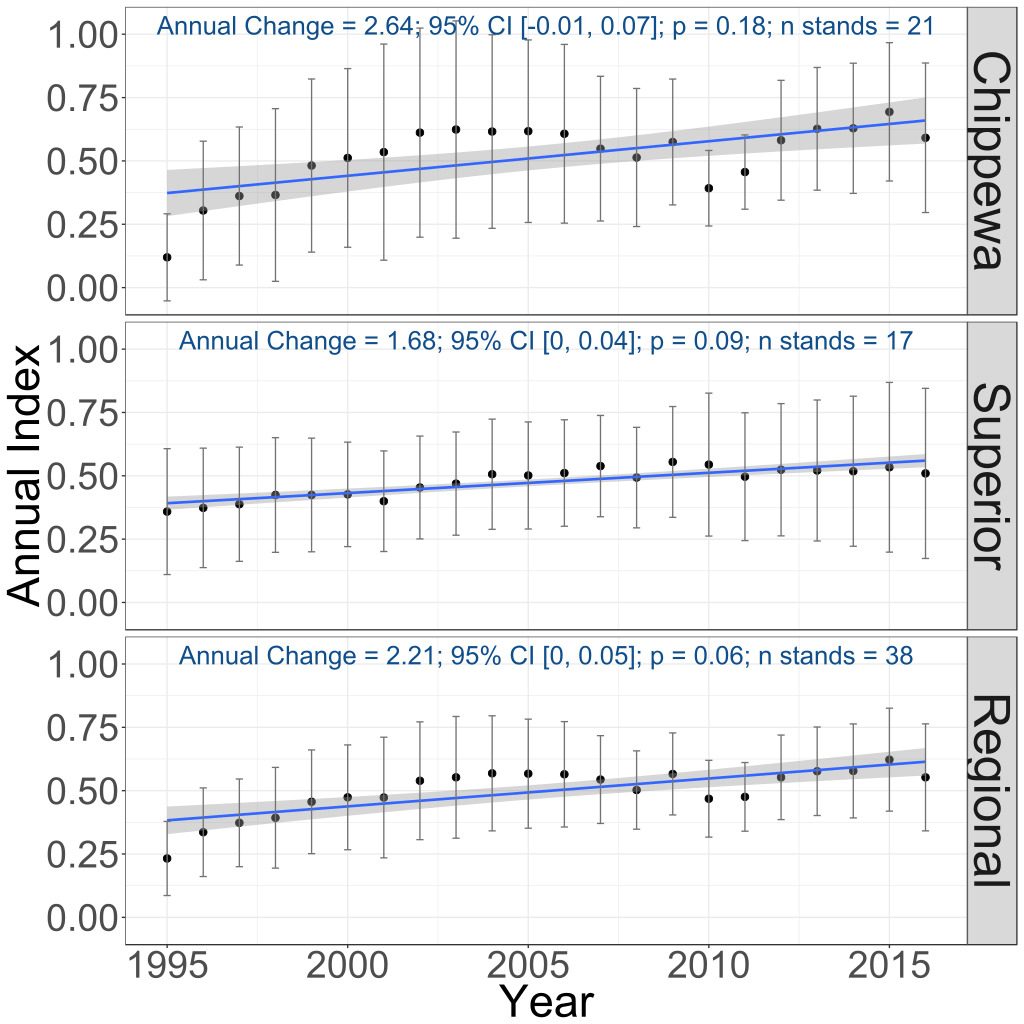 Population trend of the Northern Waterthrush on the Chippewa and Superior National Forests and the combined regional trend, 1995–2016 (Bednar et al. 2016).

Widely distributed, with an increasing population trend, the Northern Waterthrush is not considered a conservation priority at the state or federal level. It has been assigned a moderately low Continental Concern Score of 8/20 by Partners in Flight (Rosenberg et al. 2016).

Given that more than 56% of the species’ North American population occurs in Canada’s boreal forest, the future of this biome is critical to its future. Large-scale landscape changes recently spurred by hydropower development, mineral extraction, and oil and gas development pose threats. Indeed, hydropower projects have impacted large areas of the species’ habitat in recent years (Boreal Songbird Initiative 2016). Climate change, on the other hand, is not considered an immediate threat to the species. Although its vulnerability to warming temperatures has not been closely examined, an initial assessment ranked its vulnerability as relatively low (North America Bird Conservation Initiative 2010).

In the short-term, the future of the Northern Waterthrush appears secure in Minnesota. Strong efforts to protect riparian zones around lakes, streams, and rivers on federal, state and county lands are critical in forest stands managed for timber as well as along lakeshores that face increasing residential and recreational development.