A regular but highly variable permanent resident. The Pine Siskin was uncommon in northern forested areas during the Minnesota Breeding Bird Atlas (MNBBA).

Distributed across the boreal forest in Canada to Alaska, much of the northern United States, and southward throughout the Rocky Mountains as far south as Mexico (Figure 1). The highest densities are recorded in the western Rocky Mountains, especially in British Columbia.

Assigned a Continental Concern Score of 10/20 by Partners in Flight where it also was designated as a watch list species, one that is common but in steep decline.

Highly variable diet consisting of gleaning arthropods, seeds, and buds on conifers, but also on deciduous trees and shrubs, grasses, forbs, and a variety of weedy species. Also commonly found at bird feeders, especially in winter or during migration. 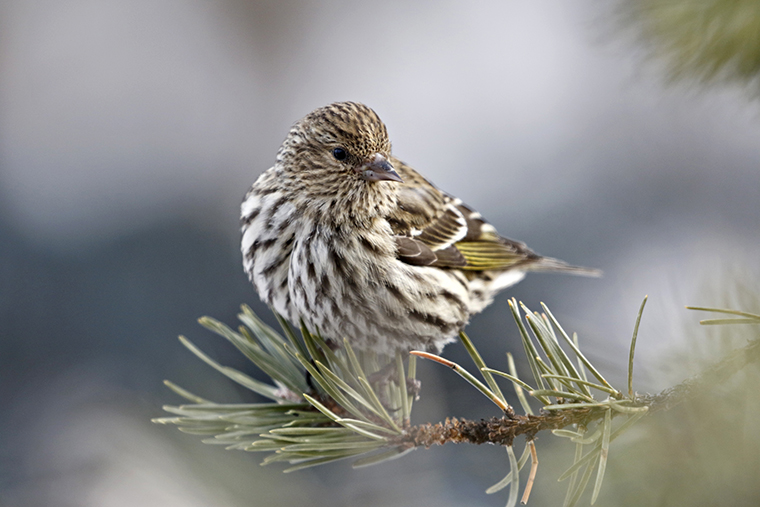 Breeding distribution and relative abundance of the Pine Siskin in North America based on the federal Breeding Bird Survey from 2011 to 2015 (Sauer et al. 2017).

Roberts (1932) described the Pine Siskin as a common summer resident throughout the evergreen and pine forests during the breeding season, and it undoubtedly nests over a wide area. He only reported finding one nest in a pine tree near Eveleth in St. Louis County in 1918, but he also noted a July 1918 observation of “young birds out of the nest being fed by the parents in Pine County.”

He refers to the species whimsically as “possessed of a gipsy-like wanderlust that takes it now here, now there, and only irregularly and seemingly by chance back again to the same locality,” as well as “wandering through the land, few or many together, winter and summer, settling for a season and rearing its family in the most unexpected places.” He describes nesting that has occurred in Bismarck, North Dakota; Sioux City, Iowa; and eastern Nebraska in the early 1900s in localities “far from where it is supposed to belong.” Overall he described it occurring over a substantial portion of the state, but most commonly in the northern third.

Green and Janssen (1975) reinforce its vagabond nature of nesting in the state but describe its primary breeding distribution in the northeastern coniferous region. They note confirmed nesting from Itasca and St. Louis Counties, plus inferred nesting from Clearwater, Lake, and Pine Counties. However, they also state that nesting was confirmed in Hennepin County in 1961 and 1966, plus they cite evidence of inferred nesting in Lac qui Parle, Rice, and Winona Counties. Most southern nesting seems to occur after large winter invasions. Janssen (1987) summarized additional confirmed nesting records from 14 counties, ranging from Cook County in the northeast to Winona County in the southeast, and west to Stearns County in central Minnesota. He further points out a summer observation in June 1980 from Houston County, the most southeastern county of the state. In their summary, Hertzel and Janssen (1998) added two more, Cass and Koochiching, for a total of 16 counties with confirmed nesting records since 1970.

The Minnesota Biological Survey reported 53 breeding season locations that illustrated the wide and patchy nature of the species’ distribution across the northern half of the state. The most extensive locations with observations were from Cook County, central St. Louis County, and eastern Becker/western Hubbard County. Other observations were recorded in the northwest in eastern Marshall County and western Pennington County, south to Crow Wing and the border of Cass and Morrison Counties.

The MNBBA included 318 records of the Pine Siskin that were also scattered across a substantial part of the state, except most of the southern and western portions of Minnesota (Figure 2). Breeding observations were recorded from only 5.3% (252/4,737) of the blocks in the state but from almost 50% (43/87) of the counties (Figure 3; Table 1). A total of 28 blocks had confirmed nesting, including southeast to Kandiyohi County, south to Blue Earth, Rice, and Olmstead Counties, and northwest to Morrison County. As previously described, most records were found in northeastern Minnesota.

The probability map based on the MNBBA point counts predicted low abundance of the Pine Siskin throughout the northeastern and northern region of Minnesota (Figure 4). However, the erratic breeding and migratory nature of this species renders predictions as very precarious. For instance, even though most records of the siskin were from northeastern Minnesota, the species was confirmed nesting in southern Minnesota.

Dawson (2014) suggested that increased silviculture and establishment of conifers may have increased the normal range of this species farther south than its traditional range. This was likely augmented by the growth in availability of feeders. These southward extensions were especially true during the twentieth century.

During the Wisconsin atlas, Cutright et al. (2006) documented a similar pattern of nesting to that described in Minnesota. The first nest in Wisconsin was not discovered until 1948 in Iron County, in the north, 30 years later than in Minnesota. Since the 1960s, nesting records have increased throughout the state with confirmed nesting in 40 quads during its atlas of 1995–2000, including records from its southern tier of counties in Kenosha, Racine, and Walworth. Brewer et al. (1991) also identified an increase in nesting records in southern Michigan and hinted at increased birding activity as a potential factor, but they acknowledged the species is likely breeding more frequently in the southern part of the state. Dawson (2014) presented additional evidence of recent southward extensions of nesting in Illinois, Indiana, and Ohio, especially in the 1970s. 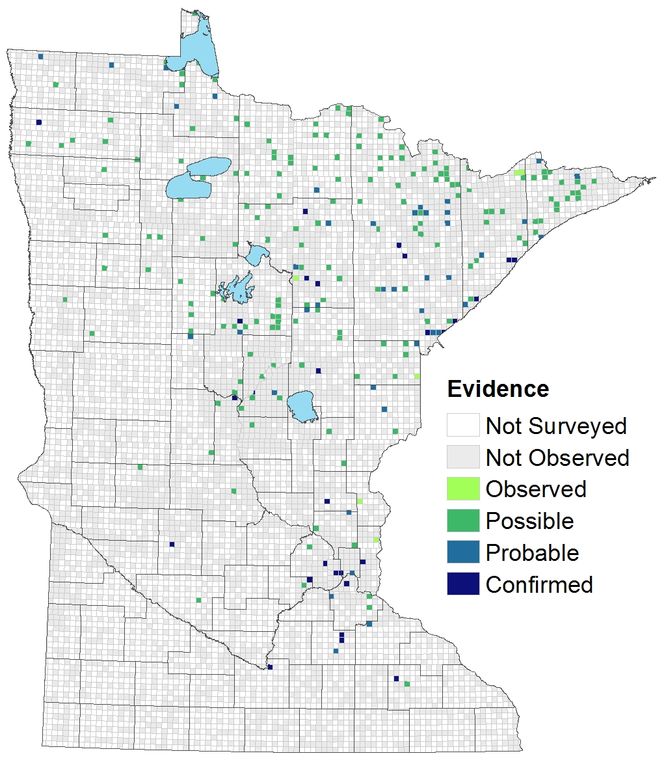 Breeding distribution of the Pine Siskin in Minnesota based on the Breeding Bird Atlas (2009 – 2013).

Summary statistics of observations by breeding status category for the Pine Siskin in Minnesota based on all blocks (each 5 km x 5 km) surveyed during the Breeding Bird Atlas (2009-2013).

Summary statistics for the Pine Siskin observations by breeding status category for all blocks and priority blocks (each 5 km x 5 km) surveyed during the Minnesota Breeding Bird Atlas (2009-2013). 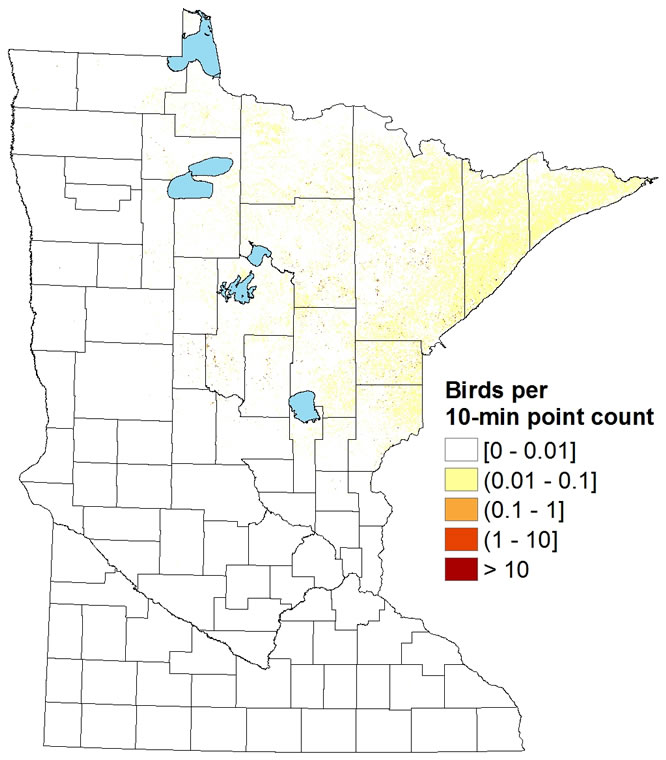 Predicted breeding distribution (birds detected per 10-minute point count) of the Pine Siskin in Minnesota based on habitat, landscape context, and climate data gathered during the Minnesota Breeding Bird Atlas (2009-2013) using the General Linear Modeling method without an adjustment for detectability. 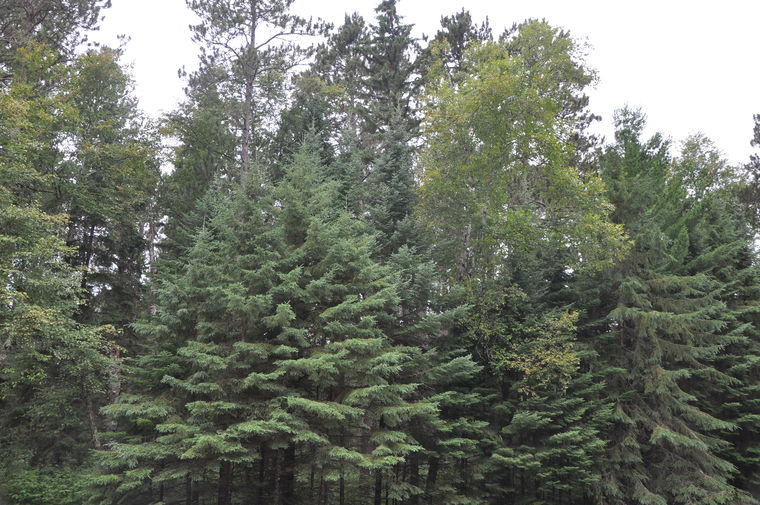 Habitat profile for the Pine Siskin based on habitats within 200 m of point counts where the species was present during the Minnesota Breeding Bird Atlas (2009-2013).

The federal Breeding Bird Survey (BBS) trend for Minnesota was unreliable, but the Pine Siskin survey-wide trend indicated a highly variable and significant decline from 1966 to 2015 of 3.67% per year (Figure 7). The decline was similar when only the United States or the Canadian BBS routes were considered. Partners in Flight (Rosenberg et al. 2016) identified an 80% decline in the population from 1970 to 2014. BBS analyses indicated that the decline was very widespread throughout the United States and Canada, including northeastern Minnesota (Figure 8). Exceptions were population increases in northern Wisconsin, portions of Ontario, and scattered increases in several other parts of North America.

Christmas Bird Counts (CBCs) from 1959 to 1988, however, provided a very different signal, with significant increases in winter trends across much of North America, including a survey wide increase of 2.2% per year, and a 7.2% per year increase in Minnesota. Unfortunately a more recent analysis of CBCs has not been completed.

Population estimates within specific habitats for the Pine Siskin in Minnesota were not available. NFB counts in the Chippewa and Superior National Forests provide evidence for its rarity. Mean counts in the Chippewa and Superior National Forests were 1.13 and 1.17 detections per 100-10 minute unlimited distance point counts , respectively, from 1995 to 2012. Overall the Pine Siskin is most abundant at higher elevations in the western United States and the western Canadian provinces (Figure 1). For instance, BBS routes completed in Minnesota had a mean of less than 1 detection per route per year and only from the northeastern and northern portions of the state, while those in British Columbia average 120 detections per route per year (Sauer et al. 2017). 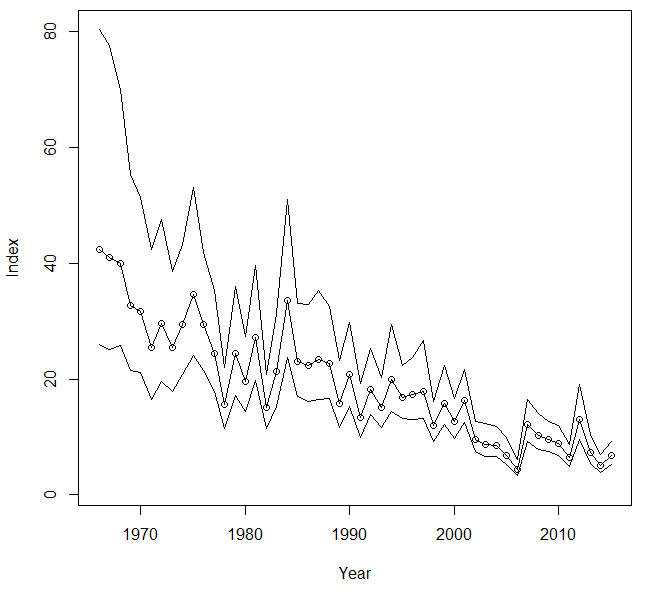 Breeding population trend for the Pine Siskin survey-wide in the United States and Canada for 1966–2015 based on the federal Breeding Bird Survey (Sauer et al. 2017).

Population trend map for the Pine Siskin in North America for 1966–2015 based on the federal Breeding Bird Survey (Sauer et al. 2017).

The recent Partners in Flight (Rosenberg et al. 2016) conservation concern score of 10/20 places the Pine Siskin as a common species of continental importance that is in steep decline. It is also listed as a species of concern in the Upper Mississippi River–Great Lakes Joint Venture region. Factors identified as potentially contributing to its decline included disease, inclement weather, habitat degradation (especially the loss of conifers), and nest predation (Dawson 2014). Salmonellosis (Salmonella typhimurium) is a pathogen associated with bird feeders that causes mortality. Rodgers (1991) recommended several practices to reduce the spread of this pathogen, including: (1) cleaning and disinfecting feeders at least yearly, (2) ceasing feeding for 10 days if many bird deaths are observed, and (3) placing food in locations that will lessen the risk of the birds’ contact with avian fecal material.

Nest predation was also identified as a potentially serious issue because of its gregarious, semi-colonial nature in nesting. This behavior can render it more vulnerable to attraction by predators. Inclement weather also likely has major effects on population levels but is difficult to quantify. Minnesota’s Generic Environmental Impact Study (Niemi and Hanowski 1992) estimated a decline in the species’ population with moderate increases in forest harvesting. However, Dawson (2014) suggested that even though forest management such as harvesting of mature conifers or short-rotation forestry can have negative effects, increases in urban conifers such as in parks, cemeteries, and around homes could counteract these problems.

The Climate Change Report by the National Audubon Society (2015) and publication by Langham et al. (2015) identified the Pine Siskin as “climate threatened” due to a potential 34% loss of its current summer range by 2080. The species is predicted to need to move to higher elevations in the western mountains and to the higher latitudes of Canada and Alaska to find suitable habitat in the future.