A regular breeding resident, migrant, and regular winter resident in the southern half of the state. The Red-tailed Hawk was common during the Minnesota Breeding Bird Atlas (MNBBA).

The Red-tailed Hawk is widely distributed in open country throughout the United States and to the tree line in northern Canada and Alaska. Red-tails have substantial variation in their plumage. Currently there are 12 recognized subspecies in two groups, of which the “typical” Red-tailed Hawk (Buteo jamaicensis borealis) is the primary subspecies found in Minnesota. Highest densities are found in widely scattered patches in Kansas, North Dakota, Alberta, and California (Figure 1).

A carnivore that primarily uses a sit-and-wait strategy to feed on small to medium-sized mammals, birds, amphibians, and reptiles.

Placed in trees on edges or within mixed deciduous-coniferous forests adjacent to openings of shrubland, grassland, or agricultural areas. 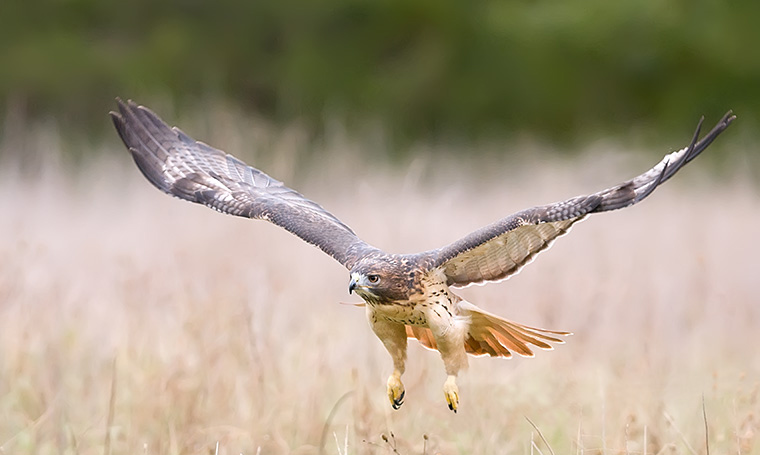 Breeding distribution and relative abundance of the Red-tailed Hawk in North America based on the federal Breeding Bird Survey, 2011–2015 (Sauer et al. 2017).

The Red-tailed Hawk is one of Minnesota’s most distinctive and common raptor species, especially in open country, along roadways, in woodlands, and in openings in heavily forested areas. It is easy to identify when its distinctive red tail is observed. It is a polymorphic species with 4 subspecies in Minnesota and potentially 16 described in its North American population (Preston and Beane 2009). The 4 subspecies include the dark-phased Harlan’s Hawk (Buteo jamaicensis harlani), the dark, often rufous-colored Western Red-tailed Hawk (B. j. calurus), and the light-phased Krider’s Hawk (B.j. kriderii) (Green and Janssen 1975). As previously noted, the most commonly observed subspecies in Minnesota is the Eastern Red-tailed Hawk (B. j. borealis).

Roberts (1932) noted it was a “summer resident, breeding throughout the state.” He lamented the widespread disappearance of this species as a summer resident in Minnesota in his 1932 treatise: “During an automobile trip entirely across the state from Minneapolis to Pipestone County and back, August 31 to September 4, 1923, not a single Red-tail was seen. Only two were noted on a similar trip, June 18 to July 7, 1924 from Minneapolis west to the Dakota line, south along the wooded shores of Lakes Traverse and Big Stone to Lac qui Parle County and return” (Roberts 1932).

More than 40 years later, Green and Janssen (1975) labeled the Red-tail simply as a summer “resident throughout the state” and considered it the third most abundant raptor after the “Marsh Hawk” (now the Northern Harrier) and American Kestrel in most areas of the state, except in the forested areas, where the Broad-winged Hawk was most numerous. Several years later, Janssen (1987) similarly described the species as a summer “resident throughout the state, except in the coniferous regions of the northeast and north-central regions.” He reported confirmed nesting in 38 counties since 1970, with a similar distribution as presented by Roberts (1932). Later, Hertzel and Janssen (1998) expanded that to include an additional 13 counties since 1970, for a total of 51 counties.

The Minnesota Biological Survey (MBS) recorded 506 breeding season locations for the Red-tailed Hawk (Minnesota Department of Natural Resources 2017). The locations were distributed throughout the state where the MBS has completed inventories but were less numerous in the heavily forested regions of the northeast and east-central regions of Minnesota.

The participants in the MNBBA reported breeding evidence in every county of the state and a total of 2,620 records (Figure 2). In terms of records, the Red-tailed Hawk was the most abundant raptor during the MNBBA. Red-tails were observed in 38.2% (1,852/4,848) of all surveyed blocks and 48.1% (1,125/2,337) of the priority blocks (Figure 3; Table 1). The most frequent category recorded was possible nesting because although the species is easily observed in an area, finding the actual nest can be challenging. Most confirmed or probable nesting records were identified in the Twin Cities metropolitan area, where volunteer efforts and coverage were extensive. Nesting was confirmed in 72 counties.

The probability map for the Red-tailed Hawk predicts a wide and generally uniform population distribution throughout much of western, southern, central, and northwestern regions of Minnesota (Figure 4). Within this broad area, the species is found in open and semi-open country where it is found foraging, roosting, and nesting  among scattered forest patches. Scattered breeding areas are also located in in northeastern and northern Minnesota where suitable openings exist such as in agricultural regions, farmsteads, and recently logged areas.

The population of Red-tailed Hawks is considered to be secure in Minnesota and in North America. Preston and Beane (2009) suggested that populations have expanded through much of North America during the mid- to late 20th century in response to widespread establishment of open, wooded parklands that have replaced grasslands and dense forests. The species adapts to urban, exurban, and agricultural development as long as adequate food supplies (primarily small to medium-sized mammals), perch sites, and trees or other structures for nesting are available.

Roberts (1932) bemoaned the loss of this species from his early years in Minnesota, when he observed it “in the vicinity of Minneapolis where now it is, in the summer, an object of interest.” In recent years Red-tailed Hawks have been increasingly observed in the Twin Cities area, and the MNBBA provides solid evidence of their nesting throughout the region; this is a testament to its resilience and its adaptability to human-altered landscapes. 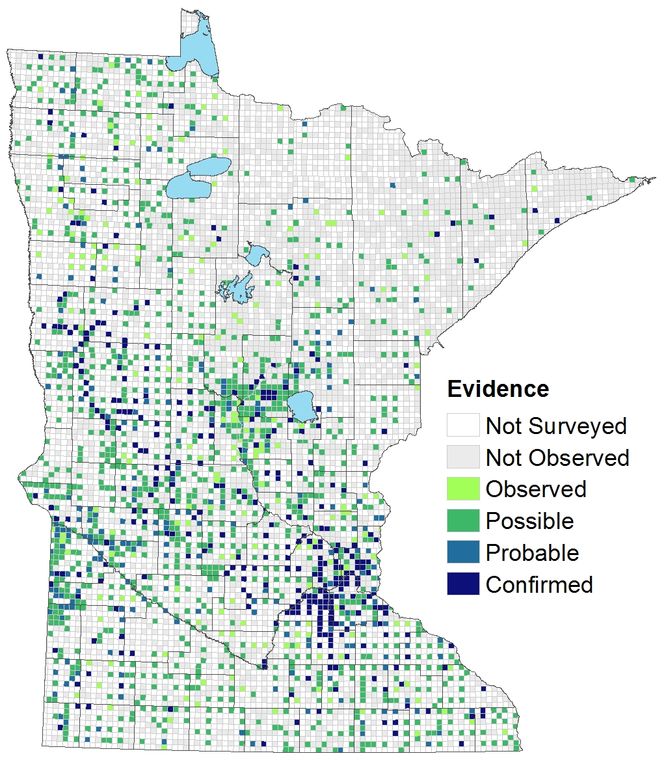 Breeding distribution of the Red-tailed Hawk in Minnesota based on the Breeding Bird Atlas (2009 – 2013).

Summary statistics of observations by breeding status category for the Red-tailed Hawk in Minnesota based on all blocks (each 5 km x 5 km) surveyed during the Breeding Bird Atlas (2009-2013).

Summary statistics for the Red-tailed Hawk observations by breeding status category for all blocks and priority blocks (each 5 km x 5 km) surveyed during the Minnesota Breeding Bird Atlas (2009-2013). 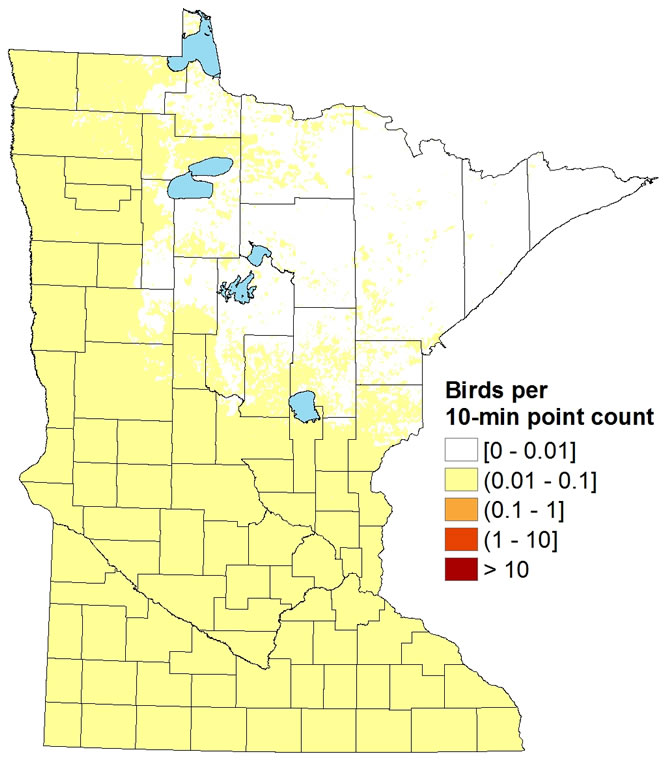 Predicted breeding distribution (birds detected per 10-minute point count) of the Red-tailed Hawk in Minnesota based on habitat, landscape context, and climate data gathered during the Minnesota Breeding Bird Atlas (2009-2013) using the General Linear Modeling method without an adjustment for detectability.

Red-tailed Hawks are found in open and semi-open habitats, such as grasslands, prairies, wetlands, and agricultural lands adjacent to fragmented forests, woodlots, and contiguous forests (Green 1991; Preston and Beane 2009). Red-tails are often found in the same habitats as the Great Horned Owl, where competition for nest sites can be intense (Figure 4). Johnson (1982) stated that Red-tails were most commonly associated with disturbed or fragmented forest habitats. He also noted the placement of their nests in or along the edge of openings, where they can gain easy access to nest sites. In the contiguous forested areas in the northern half of Minnesota, breeding habitat includes logged and burned-over areas (Green and Niemi 1978). 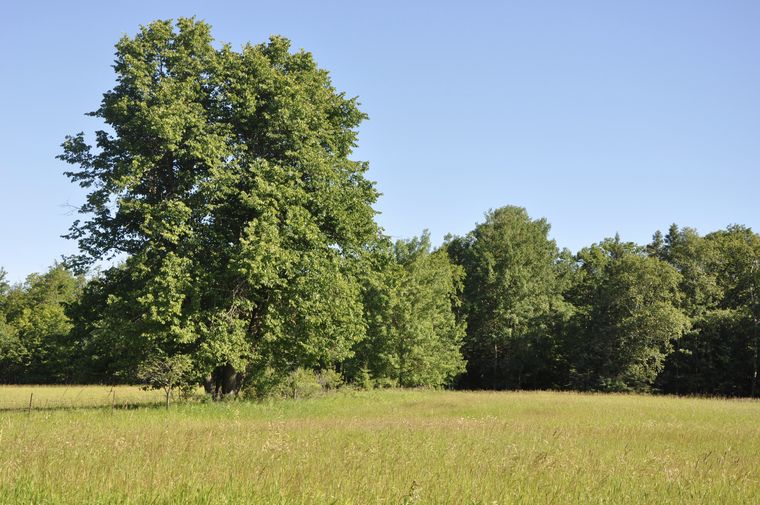 The federal Breeding Bird Survey (BBS) population trend for the Red-tailed Hawk was unreliable for Minnesota because of too few observations; the mean number of detections was less than 1 per route per year in Minnesota. The overall trend for routes censused in the United States averaged about 1 detection per route per year and indicated the population was increasing by 1.73% per year from 1966 to 2015 (Figure 6). In addition, the trends for virtually all states and regions were increasing over this same time period (Sauer et al. 2017). Partners in Flight (2017) estimated based on the BBS that Red-tailed Hawks have increased by 106% from 1970 to 2014.

Bohm (1978) estimated nesting densities in Minnesota by attempting to find all nests in an 18-square-mile area of potentially good nesting habitat. Based on this substantial effort, he estimated a density of 0.21 nests per km2 (0.56/mi2) and compared this with four other similar studies, which ranged from 0.14 nests per km2 (0.37/mi2) in Alberta to 0.77 nests per km2 (2.0/mi2) in California. 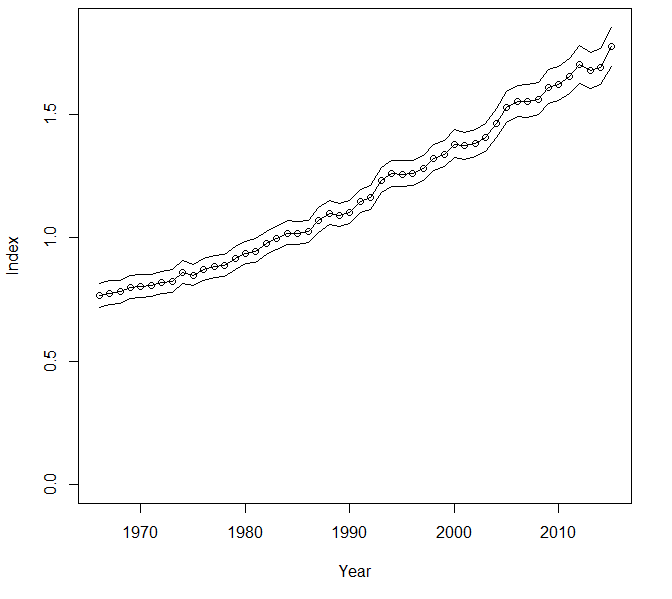 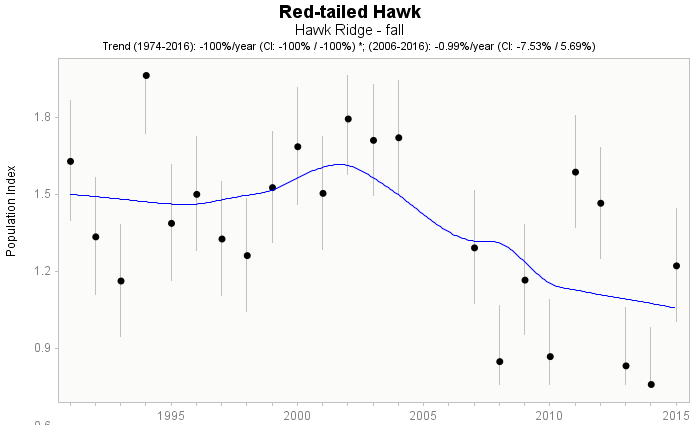 Fall migration counts of the Red-tailed Hawk at Hawk Ridge, Duluth, Minnesota, as calculated by the Raptor Population Index from 1974 to 2012.

With a Continental Concern Score of 6/20, the Red-tailed Hawk is of low conservation concern in North America. Among the reasons for minimal concern for this species at present is its substantial North American population, its wide distribution, and its overall increasing breeding population.

Many of the past threats, such as shooting of Red-tailed Hawks, have subsided, but isolated events still occur. Educational programs and laws have helped, but they need continued attention and enforcement. Lead poisoning; pesticides from agricultural activities; collisions with cars, planes, wires, and wind turbines; and electrocution from power lines have continued to be sources of mortality. Because of its diet of small to medium-sized mammals, Red-tails were not greatly affected by the effects of DDT in the mid-20th century.

Great Horned Owls are known to prey upon Red-tailed Hawk nestlings, and corvids prey on their eggs. Bald Eagles will rob Red-tailed Hawks of food. Despite these threats, the species appears to be healthy at present. It was one of the most frequently killed raptors at wind farms in California. Its susceptibility to wind farm mortality will need to be monitored, as the number of wind farms and turbines is expected to increase in the future.

Because of its wide and extensive southern distribution, the Red-tailed Hawk is not expected to be affected in the near future by climate change.