A regular breeding species and migrant; regular in winter with reports from scattered locations statewide. The third most frequently reported species, the Red-winged Blackbird was very abundant during the Minnesota Breeding Bird Atlas (MNBBA).

Distributed across Canada, the United States, and portions of Central America, the core of the blackbird’s breeding range is in the northern Great Plains and east through the entire Mississippi River Valley south to the Texas Gulf Coast (Figure 1).

Assigned a Continental Concern Score of 8/20  by Partners in Flight.

Feeds primarily on a variety of terrestrial insects during the summer and waste grain and seeds during the winter. 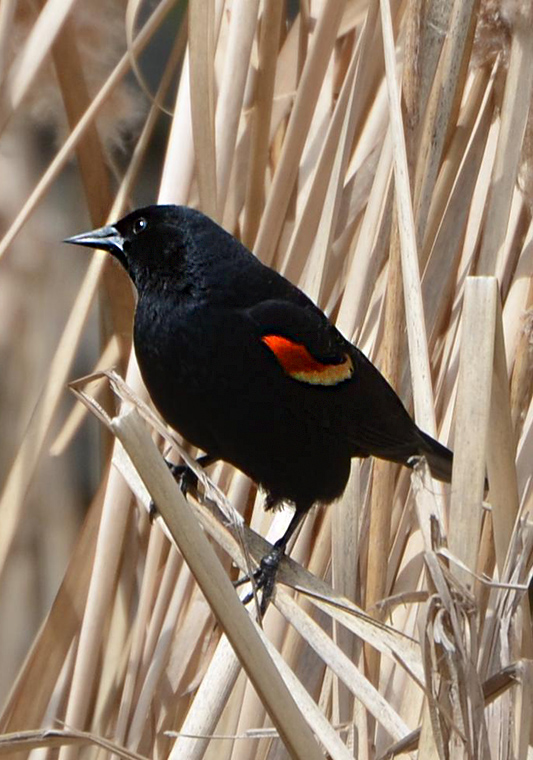 Breeding distribution and relative abundance of the Red-winged Blackbird in North America based on the federal Breeding Bird Survey from 2011 to 2015 (Sauer et al. 2017).

The Red-winged Blackbird was recognized as an abundant and widely distributed breeding species as early as 1892, when Hatch wrote the first comprehensive account of Minnesota birds (Hatch 1892). When Roberts published his more detailed account of the species in 1932, he reflected on the species abundance:

There is, perhaps, no more abundant and widely distributed native bird in North America than the Red-winged Blackbird, and Minnesota, with its thousands of lakes, marshes and sloughs, possesses an all too generous share.

Indeed, their abundance often wreaked havoc with farmers as the birds took a liking to young grain sprouts, ripened grain crops yet to be harvested, and ears of corn when the kernels are still soft and milky (Bent 1958). Late summer flocks were enormous in size. One observer wrote that, from a distance, they looked “like a dense cloud of black smoke,” flying so close to one another that a single shot could take down 60–70 birds (Roberts 1932). Roberts himself noted that the birds that come to roost at some of the state’s largest wetlands “are beyond computation,” comprised of “millions and millions” of birds.

Despite the extensive loss of wetlands throughout much of Minnesota, the extent of the species’ breeding distribution has remained essentially unchanged over the past 100 years. Green and Janssen (1975) simply noted that it was a resident statewide while Janssen (1987) described it as “one of the most common and evenly distributed breeding species in the state.” By 1998 it had been confirmed breeding in 53 of Minnesota’s 87 counties since the year 1970 (Hertzel and Janssen 1998).

Atlas data also were used to generate a model that predicts the relative abundance of the Red-winged Blackbird statewide (Figure 4). The species is most abundant south and west of the Laurentian Mixed Forest Province with predicted densities ranging from moderate to high. The species is considerably less abundant throughout most of the northern forest with the exception of small pockets of more suitable habitat that support higher breeding densities, especially in the extensive peatlands north of Red Lake. 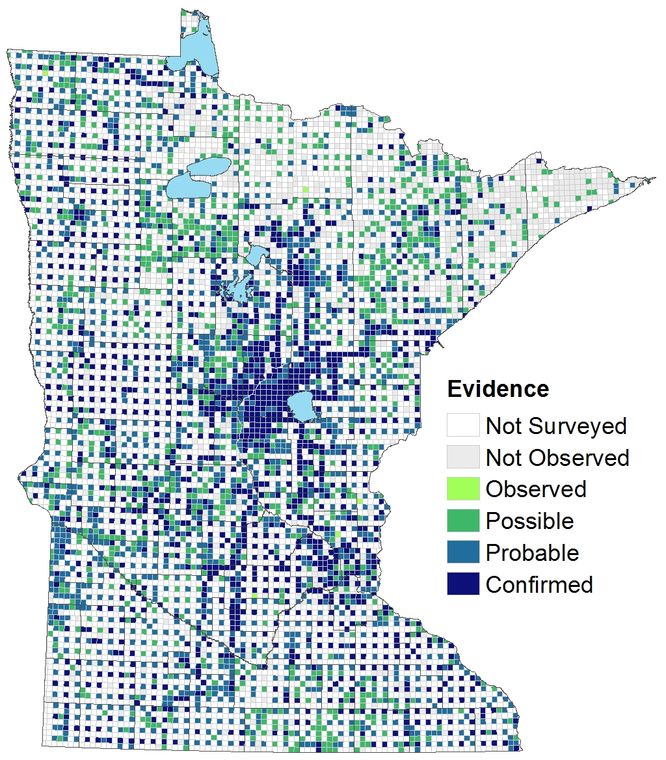 Breeding distribution of the Red-winged Blackbird in Minnesota based on the Breeding Bird Atlas (2009 – 2013).

Summary statistics of observations by breeding status category for the Red-winged Blackbird in Minnesota based on all blocks (each 5 km x 5 km) surveyed during the Breeding Bird Atlas (2009-2013).

Summary statistics for the Red-winged Blackbird observations by breeding status category for all blocks and priority blocks (each 5 km x 5 km) surveyed during the Minnesota Breeding Bird Atlas (2009-2013). 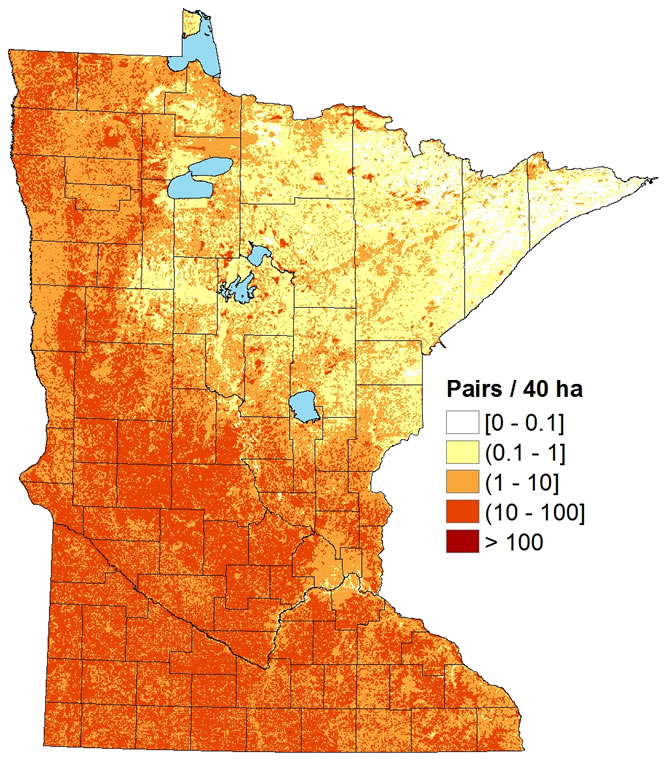 Predicted breeding distribution (pairs per 40 hectares) of the Red-winged Blackbird in Minnesota based on habitat, landscape context, and climate data gathered during the Minnesota Breeding Bird Atlas (2009-2013) using the General Linear Modeling method with an adjustment for detectability.

A common inhabitant of wetland habitats, the Red-winged Blackbird is not particularly choosey, except to avoid the interior of dense forest stands. Water is usually present, but occasionally the bird will nest in drier sites, including pastures, hay fields, and low, wet meadows. Most bird enthusiasts associate the species with wetlands fringed with a dense growth of cattails, but this adaptable species can be found in sites as variable as a tiny roadside ditch with a few standing cattail stalks to large expansive wetlands that extend for several kilometers (Figure 5). 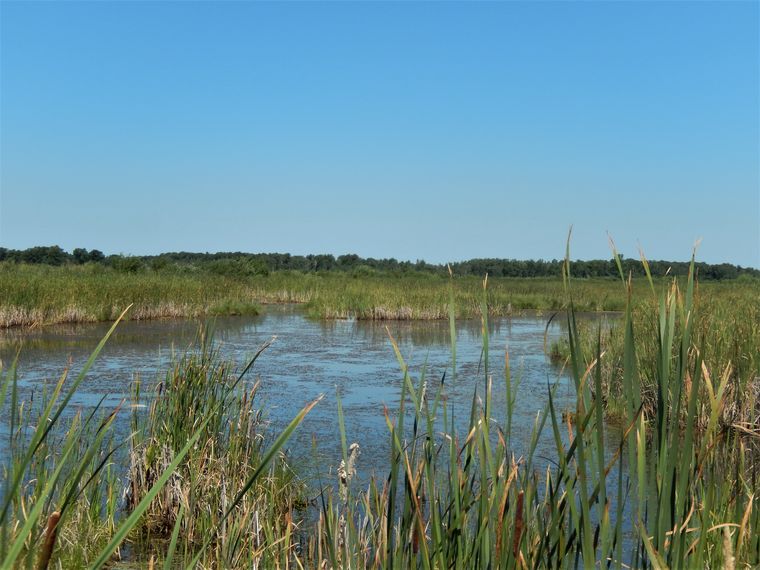 Typical breeding habitat of the Red-winged Blackbird in Minnesota (© Lee A. Pfannmuller).

Habitat profile for the Red-winged Blackbird based on habitats within 200 m of point counts where the species was present during the Minnesota Breeding Bird Atlas (2009-2013).

Long-term monitoring data gathered by the federal Breeding Bird Survey (BBS) have been used to generate a North American population estimate of 150 million birds in the United States and Canada (Rosenberg et al. 2016). In 2013, Minnesota was estimated to support approximately 3.7% of the North American population (Partners in Flight Science Committee 2013), which would place the current statewide population at 5.6 million birds. Population estimates using the MNBBA point counts generate a statewide estimate of 8.8 million breeding birds (95% confidence interval of 7.9–42.8 million).

As staggering as these numbers seem, Minnesota is just on the edge of several regions with even higher breeding densities. In Minnesota, for example, observers report an average of 17 Red-winged Blackbirds per BBS route in the state. This compares with an average of 378 in Iowa, 345 in Illinois, and 314 in North Dakota (Sauer et al. 2017).

Despite its overall abundance, the species has experienced a steady decline since the Breeding Bird Survey began monitoring bird populations more than 50 years ago. Throughout southern Canada and the United States, BBS data have documented an average annual decline of 0.93% since 1966; during the most recent reporting period from 2005 to 2015, it has declined an average of 0.47% per year (Sauer et al. 2017). In Minnesota the decline has been steeper, averaging 1.49% since 1967 and 1.83% since 2005, yielding a cumulative statewide decline of over 50% (Figure 7). Indeed, populations are declining at statistically significant levels in 23 of the 32 Bird Conservation Regions in the BBS survey area.

Regions with population declines have also experienced significant losses in wetland habitat. In Minnesota over 52% of the state’s original wetlands have been lost (Minnesota Department of Natural Resources 2016). Although the species has shown a remarkable ability to adapt to a variety of nesting habitats, agricultural areas that have been extensively tiled provide little suitable breeding habitat.

By comparison, Red-winged Blackbird populations in Minnesota’s northern forest region, where wetland loss has been less significant, have been stable for the past twenty years, from 1995 through 2016 (Figure 8). 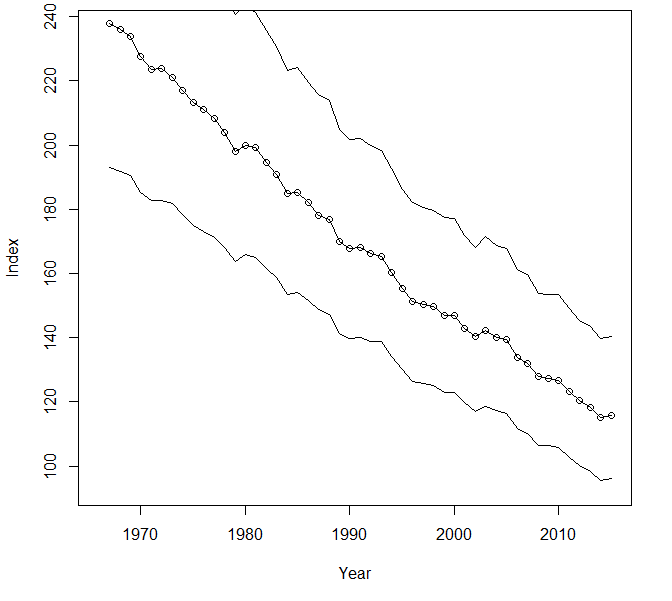 Breeding population trend for the Red-winged Blackbird in Minnesota from 1967-2015 based on the federal Breeding Bird Survey (Sauer et al. 2017). 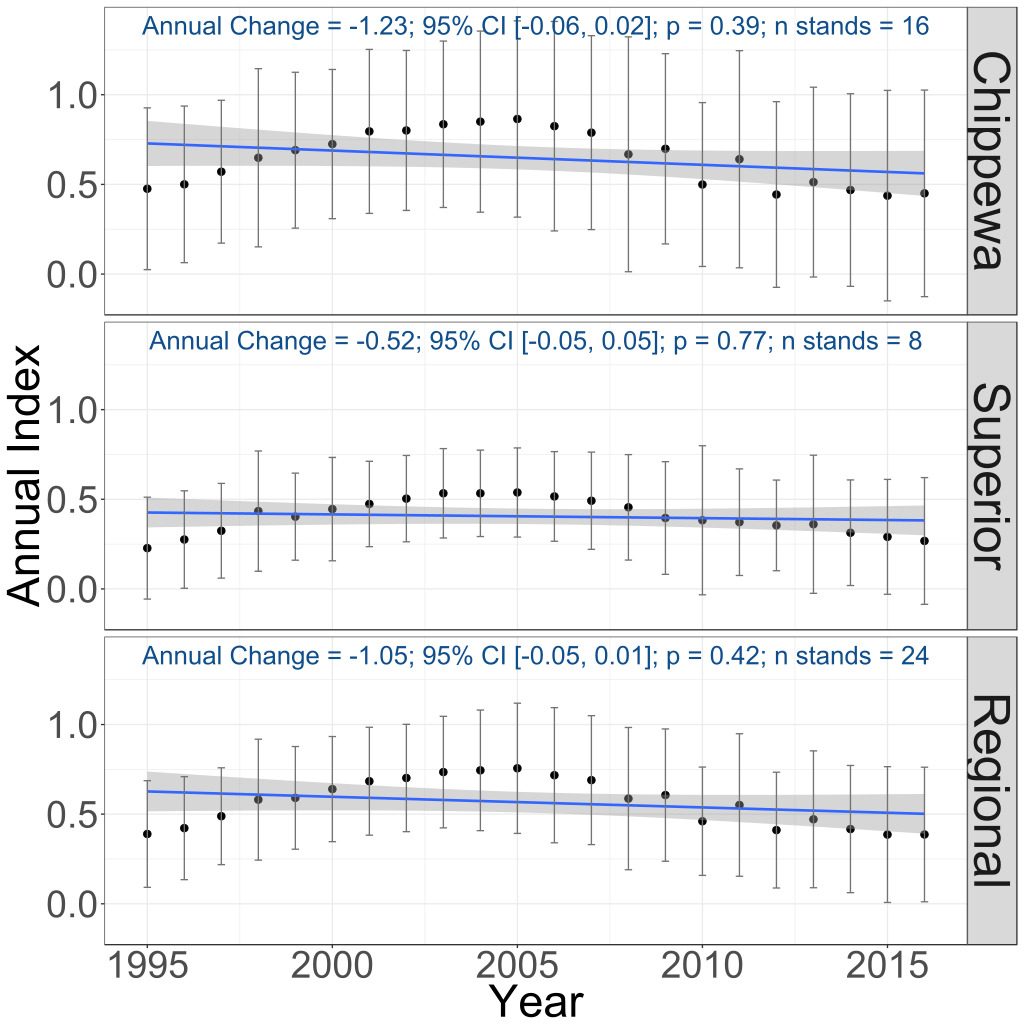 As one of the most abundant and widely distributed birds in North America, the Red-winged Blackbird is not the focus of any federal or statewide conservation efforts. Indeed, as noted earlier, the species is regarded as an economic pest, particularly in agricultural areas that are near communal roost sites. The large concentration of birds at winter roosts in the southern United States also pose a potential threat to aircraft and can be a local source of histoplasmosis, a respiratory infection caused by a fungus found in bird droppings. Because the U.S. Fish and Wildlife Service permits the taking of birds that are causing damage to crops or property or are creating a public health hazard, thousands of Red-winged Blackbirds are killed each year using a variety of management techniques.

Although many wetland species are considered to have a relatively high vulnerability to a warming climate, the wide adaptability of the Red-winged Blackbird to different habitats, including agricultural lands, has resulted in a relatively low vulnerability index (North American Bird Conservation Initiative 2010). In the short term, this abundant member of Minnesota’s avifauna remains one of the most common birds in the state. Concerted efforts to protect and restore wetlands will help to ensure sustainable populations long into the future.