A regular nesting species, a migrant, and a vagrant in winter. The Ruby-crowned Kinglet was uncommon during the Minnesota Breeding Bird Atlas (MNBBA).

Primarily found in Canada from Labrador to British Columbia and in the western United States, especially in the Rocky Mountains (Figure 1). Also occurs in the northern areas of the Upper Midwest and New England states. Highest densities are found in Labrador, the Colorado Rockies, and British Columbia.

Short- to medium-distance migrant; winters in the southern and western United States, Mexico, and south to Guatemala.

Pensile cup nest, often located high near the trunk of a conifer tree; lays the largest clutch (up to 12) of any of North America’s small songbirds. 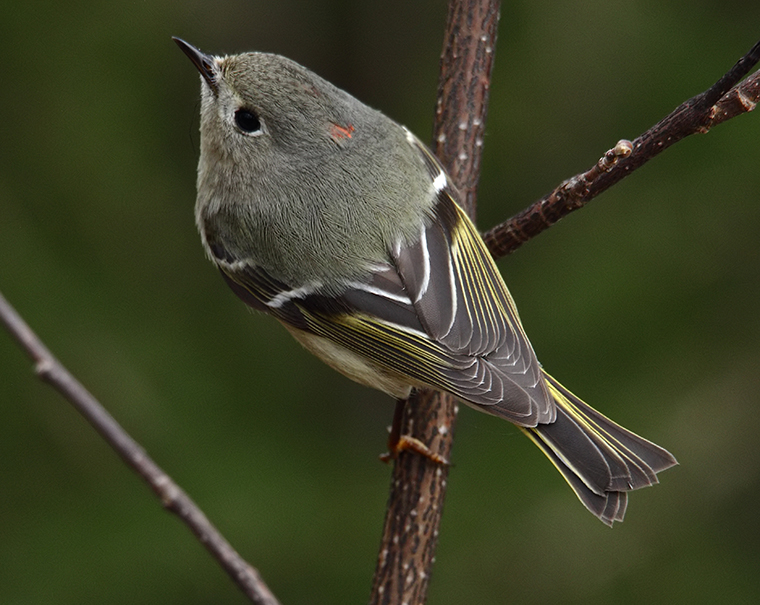 Breeding distribution and relative abundance of the Ruby-crowned Kinglet in North America based on the federal Breeding Bird Survey 2011–2015 (Sauer et al. 2017).

Roberts (1932) never recorded this species as nesting in the state, though he cited Mr. Kendall, who “thought it may possibly be nesting in the vicinity of Hibbing, St. Louis County.” Roberts also described several observations, including of singing males that span from late May to early August from Anoka, Itasca, Pine, and northern St. Louis Counties, but no definitive evidence of nesting.

The first nest found in Minnesota was located in Stearns County in 1944, where it was found in a balsam fir (Heimenz 1944). Green and Janssen (1975) described the Ruby-crowned Kinglets’ primary breeding range as northeastern and north-central Minnesota, west to Itasca State Park and eastern Marshall County. Summer observation records existed from as far south as Anoka and Dakota Counties. They remarked that it was “strange that the species with its distinctive song was completely overlooked as a summer resident in Minnesota until the 1940s.” Besides Stearns County, nesting records were scarce and only confirmed in Cook County, but nesting was inferred in Crow Wing and southern St. Louis Counties.

Several years later, Janssen (1987) noted that the Ruby-crowned Kinglet was a scarce summer resident in the northeastern and north-central regions. Both Janssen and Hertzel and Janssen (1998) in their summary of confirmed nesting since 1970 included 3 counties: Beltrami, Cook, and St. Louis.

The Minnesota Biological Survey (MBS) documented 341 breeding season locations of the Ruby-crowned Kinglet during its fieldwork. Its locations included a relatively extensive breeding distribution from southeastern Beltrami County and Itasca County and throughout much of Cook, Lake, and St. Louis Counties. In addition, they included breeding observation locations from eastern Marshall and Roseau Counties in extreme northwestern Minnesota.

The MNBBA participants documented 916 records of the Ruby-crowned Kinglet, most of which were sparsely distributed in the Laurentian Mixed Forest Province; a few records were in the Tallgrass Aspen Parklands Province (Figure 2). The highest density of records was from the extreme northeastern portions of the state. Nesting activity was reported from 8.6% (405 of 4,736) of surveyed blocks. A total of 13 confirmed nesting records were reported from Cook, Lake, Itasca, Koochiching, Roseau, and St. Louis Counties (Figure 3; Table 1). Probable nesting was observed in scattered counties throughout northern Minnesota, including Aitkin, Beltrami, Lake of the Woods, and Marshall, while possible nesting was identified in north-central Minnesota, including from Carlton, Cass, Hubbard, and Pine Counties.

The probability map of the Ruby-crowned Kinglet emphasized its distribution in northeastern and northern Minnesota (Figure 4). Highest densities were predicted in the Red Lake Peatland north of Upper Red Lake and in patchy areas in three ecological subsections of northeastern Minnesota: the Tamarack Lowlands, Toimi Uplands, and Laurentian Uplands. These regions stretch from northeastern Aitkin County to Lake County.

The lack of detections of the species and breeding evidence up to the 1940s is surprising but parallels observations in Wisconsin (Cutright et al. 2006). There were no summer records in Wisconsin until the 1940s, and the first nest, in northeastern Oneida County, was not found until 1964! A similar story was told by Chartier et al. (2013) for Michigan. The inability to find the nest can easily be forgiven because it is so well hidden high in a conifer and close to the trunk. But it is surely difficult to comprehend that early observers would have missed the distinctive and loud song of the Ruby-crowned Kinglet.

In their review of the Ruby-crowned Kinglet in North America, Swanson et al. (2008) stated that nests were first found in New York and Vermont in the 1940s. They suggested that the finding of the nests was due not to a range expansion but to increased effort by observers.

Confirmed nesting of the Ruby-crowned Kinglet in Wisconsin was documented in Pierce County, which is adjacent to southern Washington County in Minnesota (Cutright et al. 2006). This is farther south than any breeding records reported during the MNBBA. However, Janssen (1987) had previously noted summer observations even farther south, in Dakota County. He indicated that this species may occasionally nest outside the northeastern and north-central regions. Indeed, the first nest in Minnesota was observed in an urban setting, in the gardens of a hospital in St. Cloud, Minnesota (Heimenz 1944). 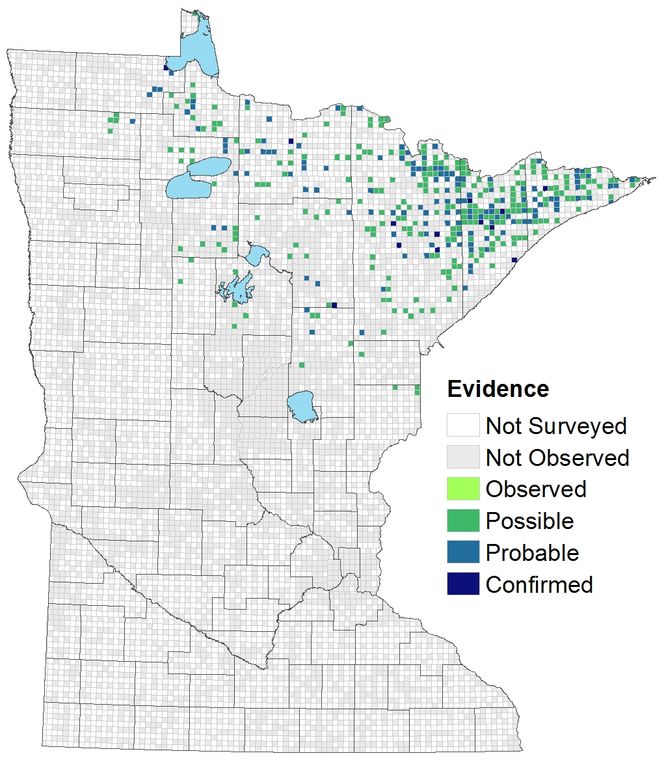 Breeding distribution of the Ruby-crowned Kinglet in Minnesota based on the Breeding Bird Atlas (2009 – 2013).

Summary statistics of observations by breeding status category for the Ruby-crowned Kinglet in Minnesota based on all blocks (each 5 km x 5 km) surveyed during the Breeding Bird Atlas (2009-2013).

Summary statistics for the Ruby-crowned Kinglet observations by breeding status category for all blocks and priority blocks (each 5 km x 5 km) surveyed during the Minnesota Breeding Bird Atlas (2009-2013). 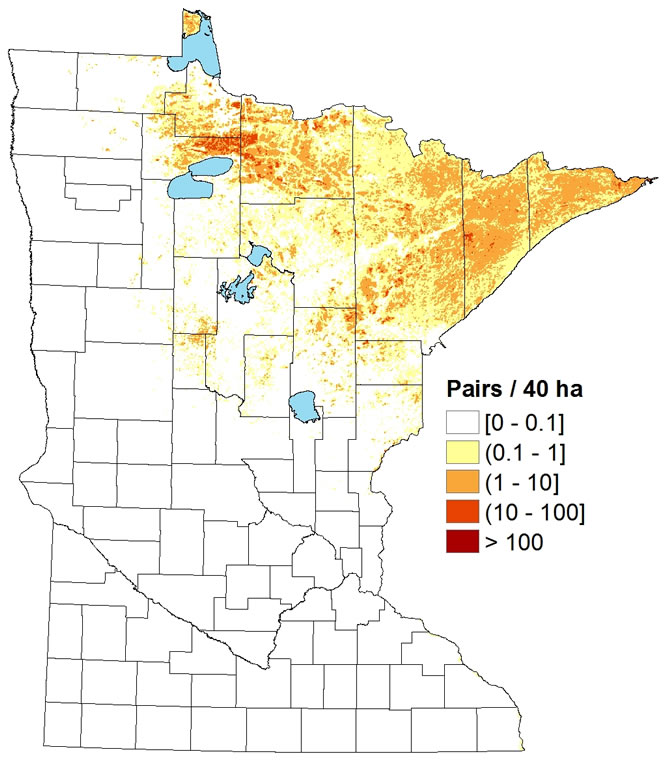 Predicted breeding distribution (pairs per 40 hectares) of the Ruby-crowned Kinglet in Minnesota based on habitat, landscape context, and climate data gathered during the Minnesota Breeding Bird Atlas (2009-2013) using the General Linear Modeling method with an adjustment for detectability.

The Ruby-crowned Kinglet is found in mature boreal coniferous forests, especially in lowland black spruce and tamarack, in upland white spruce and balsam fir, and in mixed deciduous-coniferous forests (Swanson et al. 2008). It also occurs in aspen stands when conifers (spruce or fir) are present (Hobson and Bayne 2000; Cumming and Diamond 2002). In Minnesota, breeding habitats have been described as primarily mature boreal forest including spruce-balsam fir, black spruce–tamarack bogs, white cedar, and to a lesser extent pine forests (Green and Niemi 1978; Niemi and Pfannmuller 1979) (Figure 5). Habitat data summarized on MNBBA point counts where the species occurred reinforced its use of bogs and upland coniferous forests (Figure 6).

The National Forest Bird (NFB) Monitoring Program recorded highest densities most frequently in lowland black spruce–tamarack (Niemi et al. 2016). This was also true in the Agassiz Lowlands Subsection, where the species occurred primarily in moderately productive black spruce–tamarack bogs and mixed lowland conifer stands (Bednar et al. 2016). Zlonis et al. (2017) stated that the Ruby-crowned Kinglet and the Golden-crowned Kinglet used similar habitats but appeared to segregate on a gradient of productivity in the Agassiz Lowlands Subsection of extreme northern Minnesota. Ruby-crowned Kinglets preferred larger patches of evergreen forests and had a tendency to occur in more stagnant, semi-open black spruce stands compared with the Golden-crowned Kinglet. However, both species can be found in the same forest stand. Franzreb (1984) suggested that the two kinglet species may forage in different microhabitats when they co-occur. 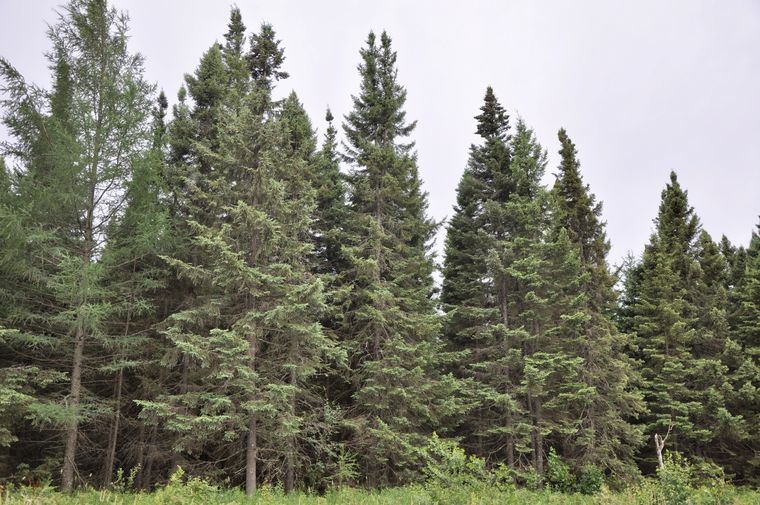 Habitat profile for the Ruby-crowned Kinglet based on habitats within 200 m of point counts where the species was present during the Minnesota Breeding Bird Atlas (2009-2013).

The federal Breeding Bird Survey (BBS) trend for Minnesota from 1967 to 2015 was insignificant. However, a more detailed examination indicated a decline from 1966 to 2001 and a flat pattern since 2001 (Figure 7). Ruby-crowned Kinglets have been significantly declining in the Boreal Hardwood Transition region during this same period (2.63% per year), but the trend data in Ontario and on all routes completed in Canada, in the United States, and survey-wide indicate a stable population. The species was not abundant enough in Michigan or Wisconsin to estimate a trend. Partners in Flight (Rosenberg et al. 2016) estimated an overall increase in the species’ North American population of 17% from 1970 to 2014. Trends in the Superior National Forest, where Ruby-crowned Kinglets are most abundant, indicated a highly significant increase of 7.48% per year from 1995 to 2016 (Figure 8). This trend was based on a large annual sample of 38 forest stands. 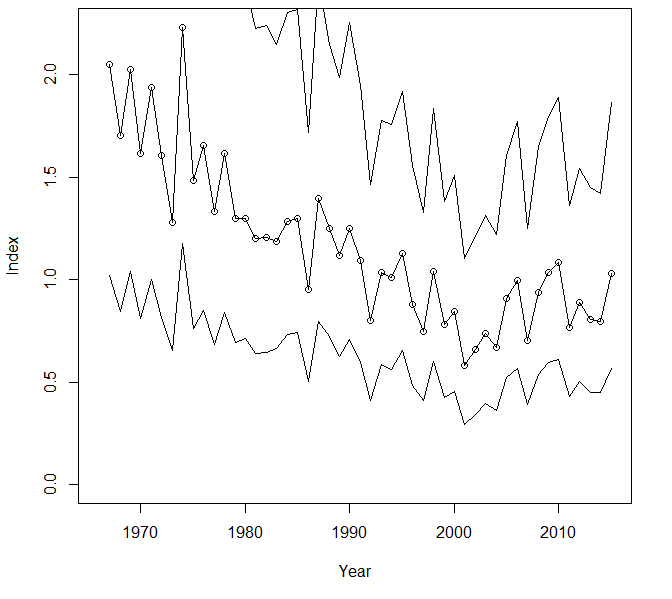 Breeding population trend for the Ruby-crowned Kinglet in Minnesota for 1967–2015 based on the federal Breeding Bird Survey (Sauer et al. 2017). 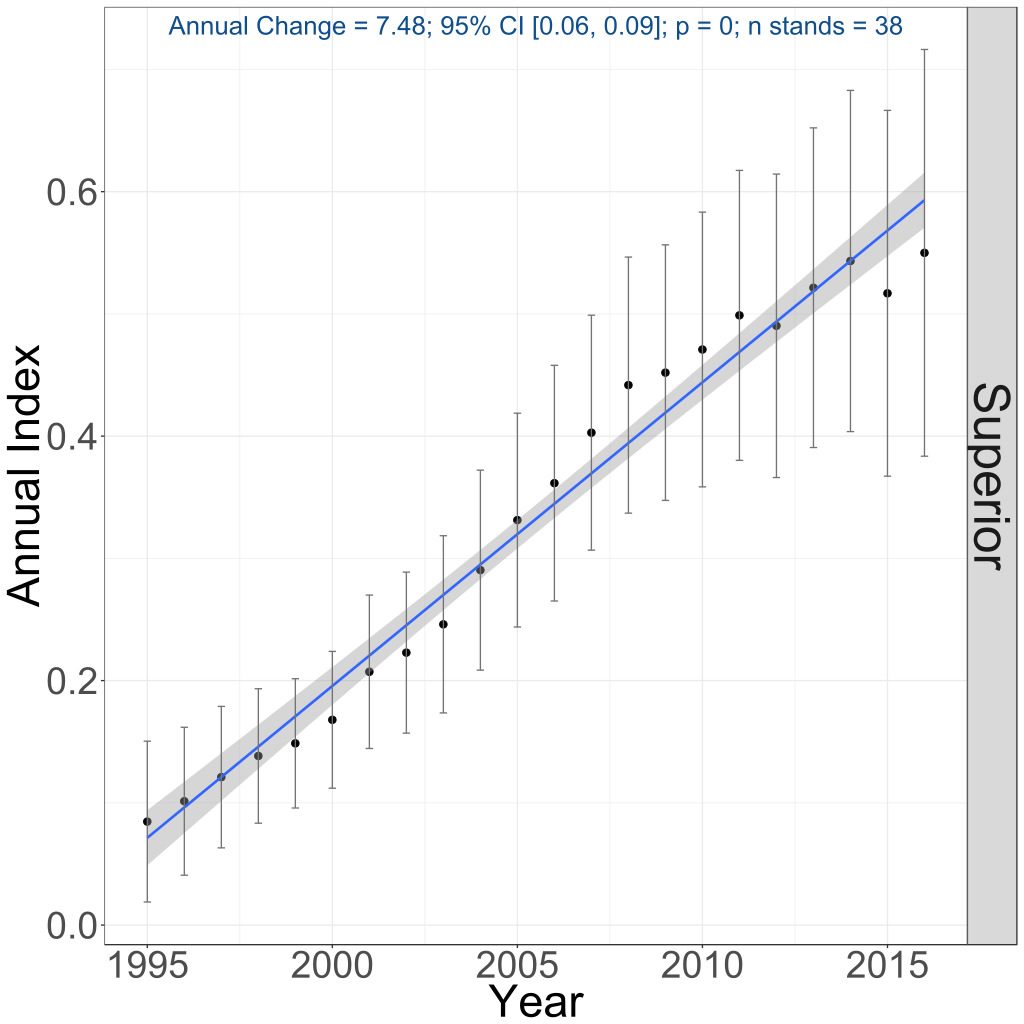 Overall, the North American population of the Ruby-crowned Kinglet appears to be stable and possibly increasing in some locations, such as the Superior National Forest. The Partners in Flight score of 6/20 is low. There are few conservation concerns for this species at present because of its large overall breeding population and wide distribution. Swanson et al. (2008) emphasized that the populations in some eastern North American regions were declining, while they were increasing in western North America despite extensive logging. They also noted that factors associated with the declining populations were unknown.

Regionally, in northeastern Minnesota, the evidence suggests that Ruby-crowned Kinglets are increasing and that this may be associated with the substantial decline in logging over the past 15 years, especially in the Superior National Forest (Niemi et al. 2016). Niemi and Hanowski (1992) projected the species to decline under any of the increased harvesting scenarios proposed during the Generic Environmental Impact Statement on timber harvesting. This was primarily due to its strong affinity for mature coniferous or mixed deciduous-coniferous forests. A decrease in kinglet populations in the Agassiz Lowlands Subsection was predicted with additional logging of black spruce trees (Bednar et al. 2016).

Langham et al. (2015) and the National Audubon Society (2015), in their review of North American species susceptible to climate change, did not list the Ruby-crowned Kinglet as a species of concern. Longcore et al. (2013) identified this kinglet as ranked second in its frequency of mortality at communication towers in the New England/Mid-Atlantic Coastal region of North America, but it was not listed in any other regions of the country.