A regular breeding resident and migrant, the Sora was a uncommon species during the Minnesota Breeding Bird Atlas (MNBBA).

The Sora is widely distributed throughout Canada, from central British Columbia and the Northwest Territories east to Nova Scotia and across the upper midwestern and western United States south through New Mexico and Arizona. The core of the Sora’s breeding range is located in the northern Great Plains of the United States and the Prairie Provinces of Canada (Figure 1).

Ranked a species of High Concern by the North American Waterbird Conservation Plan and assigned a Continental Concern Score of 9/20 by Partners in Flight.

Medium- to long-distance migrant that winters along the southern coast of the United States south through Central America and northern South America.

Probes the vegetation and wetland substrate for aquatic invertebrates and seeds.

A woven basket of aquatic vegetation attached to surrounding vegetation; often has an overarching canopy and a small ramp leading up to the nesting platform. 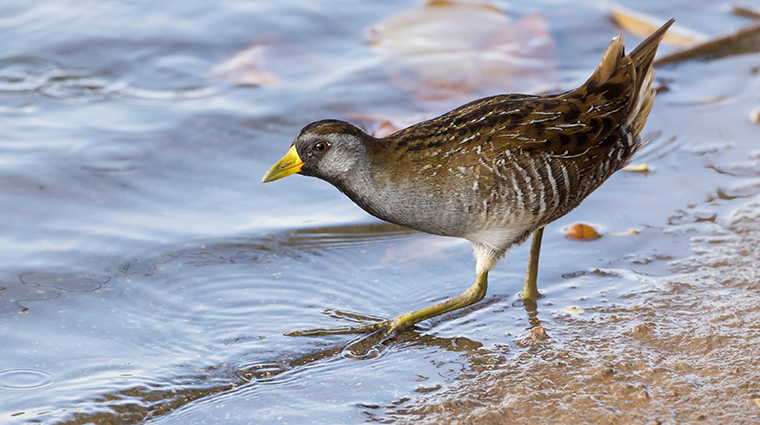 Breeding distribution and relative abundance of the Sora in North America based on the federal Breeding Bird Survey, 2011–2015 (Sauer et al. 2017).

In the late 1800s, Hatch (1892) described the Sora as Minnesota’s most abundant rail, breeding in “nearly all parts” of the state. It was so common, he noted, that in Minneapolis one only had to walk 15 minutes in nearly any direction at sunset to encounter the bird. It was particularly abundant in a narrow tamarack swamp on the north shore of Lake Calhoun, just west of downtown Minneapolis.

Forty years later, the species’ abundance appeared to have changed very little. Roberts (1932) commented that “every marsh and grass-bordered lake harbors a considerable number of these birds.” During the fall migration, the Sora could even be seen feeding in upland fields and on brushy hillsides, especially in landscapes where wetlands were not common. Despite its abundance and widespread distribution, nesting of this secretive marsh bird was only confirmed in six different counties: Cass, Crow Wing, Hennepin, Isanti, Kittson, and Polk.

Field biologists with the Minnesota Biological Survey have identified 408 breeding season locations since their field surveys began in the late 1980s. Records were least abundant in northeastern Minnesota and, with the exception of the Prairie Coteau of southwestern Minnesota, were rare in all counties south of a line between Washington County in the east and Lac qui Parle County in the west (Minnesota Department of Natural Resources 2015).

During the MNBBA, observers reported 839 Sora records in 13.5% (644/4,762) of the surveyed atlas blocks and in 15.3% (358/2,337) of the priority blocks. Breeding was confirmed in 13 blocks (Figures 2 and 3; Table 1). Reports of the Sora came from 84 of Minnesota’s 87 counties; the species was absent only in Blue Earth, Dodge, and Watonwan Counties in south-central Minnesota. Breeding evidence was documented in 12 counties, all north of the Minnesota River, including 1 record as far north as Cook County. Of the list published by Hertzel and Janssen (1998), 6 counties were additions: Clay, Cook, Douglas, Meeker, Sherburne, and Todd. The Sora was most abundant in central Minnesota, from Washington County west to Yellow Medicine County and north through the grasslands and parklands of northwestern Minnesota and the northern portion of the Eastern Broadleaf Forest. The species occurred in more than twice as many blocks (644) as its relative, the Virginia Rail (307).

The statewide probability map generated with MNBBA data predicted a low breeding density of the Sora throughout western and central Minnesota (Figure 4). Higher densities were predicted in the wetland basins located immediately west of Red Lake, in the Tallgrass Aspen Parklands, and in the glacial outwash plains southwest of Leech Lake.

Although the Sora is likely not as abundant as it was in the time of Hatch and Roberts, it remains a widely distributed species. It may even be a little more common in northeastern Minnesota than Green and Janssen believed. Nevertheless, gone are the days when one could walk out the front door and 15 minutes later find a small population of Sora rails.

Throughout the Sora’s North American breeding range, the extent of its distribution has changed little in the past 100 years. Still widespread, its occurrence has become more localized in response to an extensive loss of wetland habitats (Melvin and Gibbs 2012). States and provinces that have completed two atlases have noticed little overall change in the species’ distribution, with the exception of Ohio, where the Sora appeared to be slowly expanding the southern periphery of its breeding range (Rodewald et al. 2016).

Like other secretive marsh birds, the Sora presents challenges to field biologists, and long-term studies regarding its life history, population dynamics, and breeding biology are often limited. Two in-depth studies of the Sora and the Virginia Rail conducted in Minnesota and Iowa remain among the most significant life history studies on both species. The first was conducted in Ramsey County in the early 1950s by Pospichal and Marshall (1954); the second was conducted by Kaufmann at a number of sites in Iowa and in Anoka County, Minnesota, in the 1960s (Kaufmann 1971, 1977, 1983, 1987, 1988, 1989). 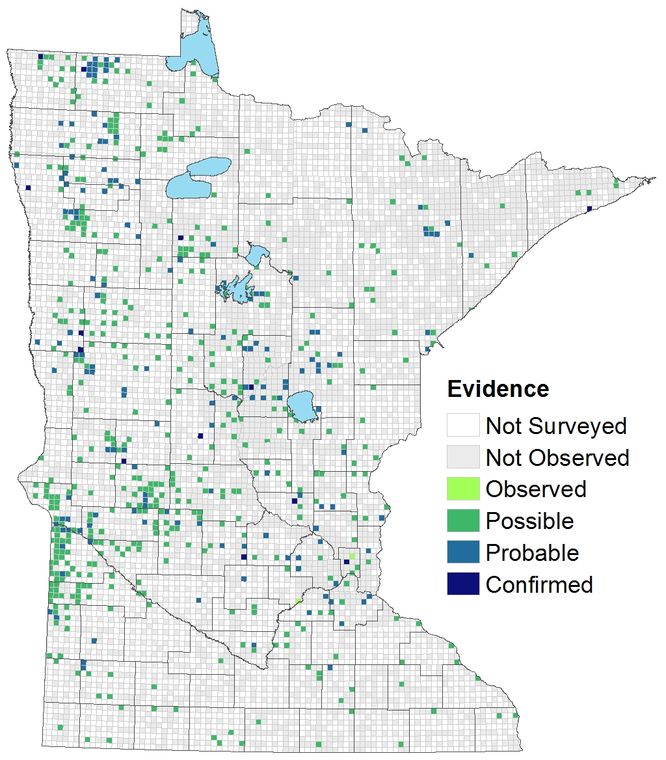 Breeding distribution of the Sora in Minnesota based on the Breeding Bird Atlas (2009 – 2013).

Summary statistics of observations by breeding status category for the Sora in Minnesota based on all blocks (each 5 km x 5 km) surveyed during the Breeding Bird Atlas (2009-2013).

Summary statistics for the Sora observations by breeding status category for all blocks and priority blocks (each 5 km x 5 km) surveyed during the Minnesota Breeding Bird Atlas (2009-2013). 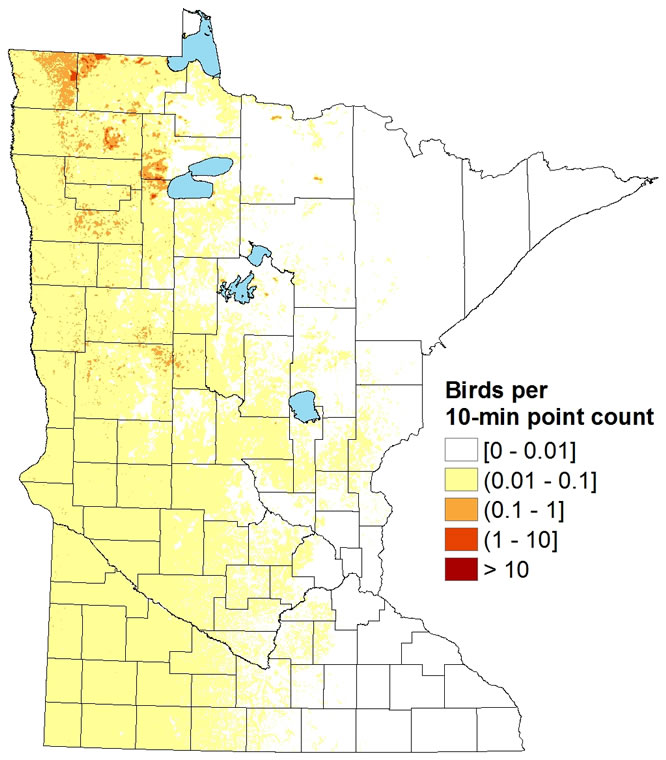 Predicted breeding distribution (birds detected per 10-minute point count) of the Sora in Minnesota based on habitat, landscape context, and climate data gathered during the Minnesota Breeding Bird Atlas (2009-2013) using the General Linear Modeling method without an adjustment for detectability.

A wetland inhabitant, the Sora demonstrates a preference for shallow, semipermanent wetland basins dominated by cattails, sedges, and bulrushes (Figure 5). Wetlands where the emergent vegetation is interspersed with small areas of open water are preferred; wetlands with large expanses of open water are often avoided (Soulliere et al. 2007; Zimmerman et al. 2002). Water levels vary widely, ranging from 0 to 92 cm in depth; in deeper marshes, floating and submerged vegetation enables the birds to walk atop the vegetation and cross open water (Zimmerman et al. 2002). Adjacent uplands may also be used once the young have hatched. Habitats within 200 m of MNBBA point counts where the Sora was detected demonstrated the species’ strong association with marshes and wet meadows, followed closely by drier grasslands (Figure 6).

Nests are usually placed within stands of vegetation, often at the boundary with open water. Some overhead vegetative cover appears important (Zimmerman et al. 2002). Although wetlands greater than 5 ha in size may harbor more birds, the Sora can be found nesting in sites as small as 0.5 ha (Melvin and Gibbs 2012). 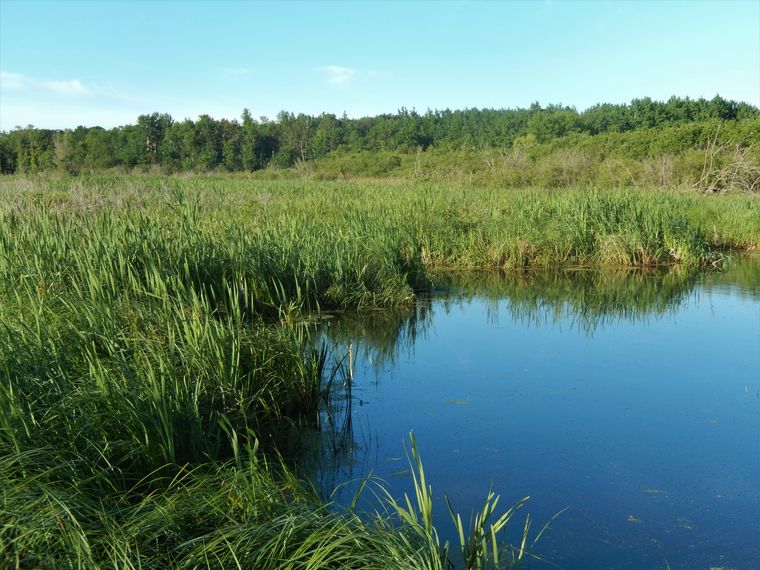 Typical breeding habitat of the Sora in Minnesota (©Lee A. Pfannmuller).

Habitat profile for the Sora based on habitats within 200 m of point counts where the species was present during the Minnesota Breeding Bird Atlas (2009-2013).

Although it is considered the most abundant rail in North America, information regarding the Sora’s population size is virtually nonexistent. Research biologists have only roughly estimated population numbers for some Bird Conservation Regions (BCRs). For example, estimates of the number of breeding pairs range from 1,190 to 6,620 throughout the entire Boreal Hardwood Transition Bird Conservation Region (BCR 12), which stretches across northern Minnesota, Wisconsin, and Michigan (Soulliere et al. 2007). The few estimates of breeding densities that are available vary from 0.1 bird per ha in North Dakota to 1.6 birds per ha in northern Iowa (Melvin and Gibbs 2012).

The only region in the BBS survey area to demonstrate a significant population decrease was the Boreal Hardwood Transition Region, which includes northeastern and north-central Minnesota (2.41% per year from 1966 to 2015). On the other hand, the only region to demonstrate a significant increase was the Prairie Pothole Region, which covers portions of southern and western Minnesota (1.72% per year). These data were more reliable for the Prairie Potholes, statistically, because of the species’ high relative abundance in the region (Sauer et al. 2017).

Monitoring data also are available from the Great Lakes Marsh Monitoring Program, coordinated by Bird Studies Canada. Begun in 1995, the binational program surveys marsh birds and frogs at more than 5,000 locations in the Great Lakes Basin. From 1995 until 2012, the Sora demonstrated a statistically significant decline of 2.3% per year (Figure 8), which corroborates the BBS trend in the Boreal Hardwood Transition Region. Wetland loss and wetland degradation, especially due to infiltration of aquatic invasive species and changes in water levels, are considered primary threats that are locally responsible for population declines (Soulliere et al. 2007). 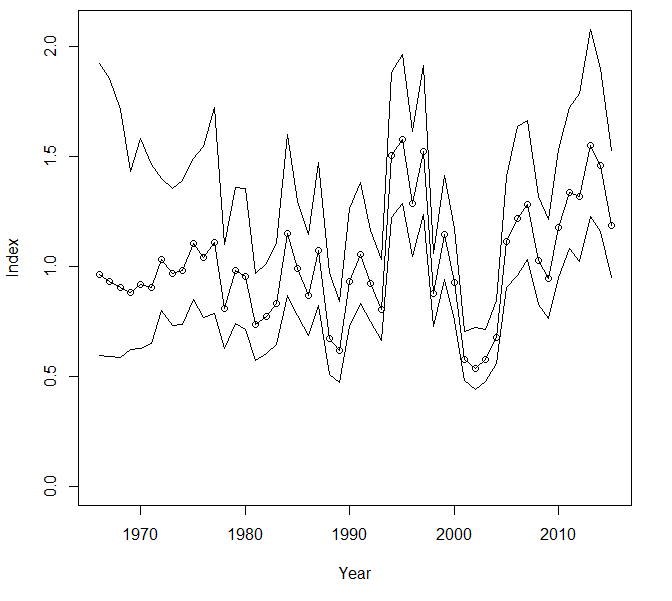 Breeding population trend for the Sora in North America for 1966–2015 based on the federal Breeding Bird Survey (Sauer et al. 2017). 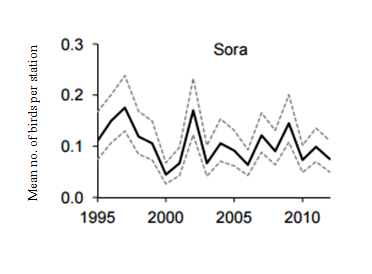 Given the species’ dependence on vulnerable wetland habitats, coupled with a poor understanding of overall population numbers, the North American Waterbird Conservation Plan designated the Sora as being of High Concern (2006). In light of the species’ stable population trend, Partners in Flight (2017) has recently assigned it a rather moderate Continental Concern Score of 9/20. The Sora is not state-listed in Minnesota, nor is it considered a Species in Greatest Conservation Need.

A harvested species, the Sora is legally hunted in 31 states, including Minnesota, and in Manitoba and Ontario (Melvin and Gibbs 2012). Bag limits are liberal. In Minnesota, for example, the daily limit for a combined bag of the Sora and the Virginia Rail is 25 birds and the total possession limit is 75 birds (Minnesota Department of Natural Resources 2016). In spite of the liberal allowable take, the level of hunting pressure is presumed small because rails are targeted by relatively few hunters. During the 2015–2016 Minnesota hunting season, the estimated number of rail hunters was only 445, compared to more than 76,000 for ducks. The estimated harvest per active hunter was 2.3 rails, for a total estimated harvest of 1,023 birds (Dexter 2016). Numbers vary considerably from year to year; in the 2014–2015 hunting season, the estimated harvest per active hunter was only 0.2 birds, with a total harvest of only 60 birds (Dexter 2016). Although the Sora likely contributes the highest numbers to the total rail harvest in Minnesota, the reported harvest total combines the Sora and the Virginia Rail with the Common Gallinule. This practice of reporting combined totals occurs in most other states as well (Melvin and Gibbs 2012).

Habitat loss is the single biggest threat to Sora populations. A warmer climate, however, could also pose challenges. In 2010, the species’ vulnerability to climate change was ranked as low (North American Bird Conservation Initiative 2010). Nevertheless, like other species that reach their greatest abundance in the Prairie Pothole Region, increased drought conditions, coupled with more extreme rainfall events, could have a severe impact on overall reproductive success.