A permanent resident; the Spruce Grouse was a rare species during the Minnesota Breeding Bird Atlas (MNBBA).

Widely distributed across the forested areas of the boreal forest in Canada from the Maritime provinces to British Columbia and Alaska. In the continental United States, resident populations extend southward into western Montana, Idaho, Washington, and Oregon. Resident populations are found in northern Minnesota, Wisconsin, and Michigan, and the northern portions of the Northeast, including Maine and New Hampshire.

A hunted species in Minnesota. Assigned a Continental Concern Score of 7/20 by Partners in Flight; designated a Species in Greatest Conservation Need by the Minnesota Department of Natural Resources. The Spruce Grouse is listed as a Regional Forester Sensitive Species on the Chippewa National Forest by the USDA Forest Service, Eastern Region.

Primarily conifer needles; some seeds, arthropods, and fruit depending on the season; forages in trees and on the ground.

On the ground, often in depressions of sphagnum moss at the base of a tree. 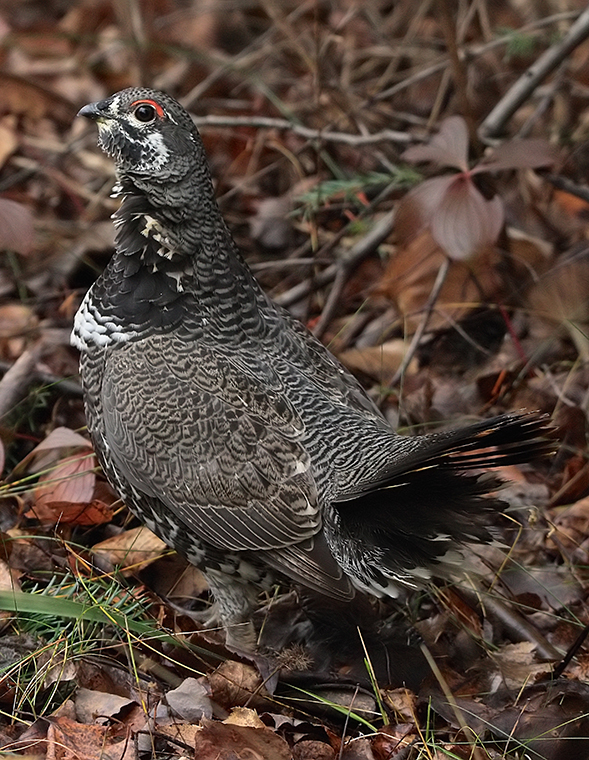 Roberts (1932) reported that the Spruce Grouse was found throughout the coniferous forest region of the state as far south as Mille Lacs and Carlton Counties, Wadena County in central Minnesota, and to eastern Marshall County in the northwest. He noted that the species was formerly “common, perhaps abundant, throughout the evergreen forests of the state.”

Roberts quoted notes made from 1865 to 1868 by Washburn, from the Mille Lacs region, who stated it was quite common about the lake, where observers were constantly running across coveys of 6 or more on walks. They nested in “mossy hummocks amongst the spruces.” He also cited observations from Trippe in 1871, who said it was abundant and breeding in the central part of the state from Carlton County west to the Mississippi River. However, the human population in the state continued to expand, and Roberts labeled it a “disappearing bird” by the early 1900s and stated that as of 1932, it “survived in numbers only in the wild, largely uninhabited region south of the International Boundary from Lake of the Woods to Lake Superior, which includes the Superior National Forest.”

Besides the observations of nesting in the Mille Lacs area in the 1800s, Roberts (1932) reported confirmed nesting only in Cook, Lake, and Roseau Counties; all were observations of hens with chicks or broods. In Roberts’s 1936 revision of his treatise on Minnesota birds, he stated that he felt compelled “to place on record all definite information in regard to this steadily disappearing species.” He included several additional observations from Lake of the Woods County, such as a survey made by Gustave Swanson in 1932 near International Falls on the northern border with Canada. Unfortunately, Swanson did not encounter a single Spruce Grouse but was told that the species had been seen near Ericsburg, Koochiching County, and that they were fairly common in the Northwest Angle of Lake of the Woods County. Roberts did add nesting activity from a brood of young that were just hatched near Ely, Minnesota, in July 12, 1933.

The Minnesota Biological Survey (MBS) reported 17 breeding season locations of the Spruce Grouse (Minnesota Department of Natural Resources 2017a). At present, they have not yet surveyed northern Beltrami, Koochiching, or Lake of the Woods Counties, but they identified multiple locations in Cook, Lake, and St. Louis Counties and 1 location in Roseau County.

The MNBBA included 87 records of the Spruce Grouse, including 21 blocks with confirmed nesting (Figure 1). These records included only 1.3% (63/4,735) of all surveyed blocks and 1.4% (33/2,337) of priority blocks (Figure 2; Table 1). Confirmed nesting was from 6 counties, all of which were previously identified by Janssen (1987) and Hertzel and Janssen (1998). No observations were made from the potential extant population noted by Janssen from northern Hubbard County. The records were most dense in northern St. Louis County and central Lake County. One record was included from southern Koochiching County.

Roberts (1932) clearly documented that Spruce Grouse formerly were found as far south as the Mille Lacs Lake region. The Spruce Grouse range in Minnesota has retracted considerably over the past 100 years. However, its distribution appears to have stabilized in the northern Minnesota counties from Cook to Roseau County and south to central St. Louis County and northern Itasca County. Zumeta and Cincotta (1982) identified a female Spruce Grouse in Pine County, but since that time, no other observations have been noted from that region.

The historical range retractions of Spruce Grouse from the early 1900s have been noted also in Michigan, Ontario, and Wisconsin (Cadman et al. 1987; Cutright et al. 2006; Chartier et al. 2013). Robinson (1980) stated that the population and range began to decline around 1912 in Michigan but since 1940 the species has been maintaining its numbers and even increasing in some parts of the Upper Peninsula. The range retractions and decline in populations were largely attributed to hunting, logging, forest fires, and human settlement.

Roberts (1932) emphasized that the “principal reason for its disappearance was undoubtedly the fact that it is naturally such a tame and indifferent bird in the face of danger that it was easily killed by whatever means happened to be at hand, even a club or stone serving in the absence of a gun.” It was from this behavior that the bird became known as “fools hen.” Stenlund and Magnus (1951) attribute a substantial reduction in the Spruce Grouse to intense logging and many forest fires from 1890 to 1915. They argued that the recovery of the species began in the early 1940s, when regenerating forests became mature enough to support understories of evergreen trees, such as jack pine, spruce, and balsam fir. 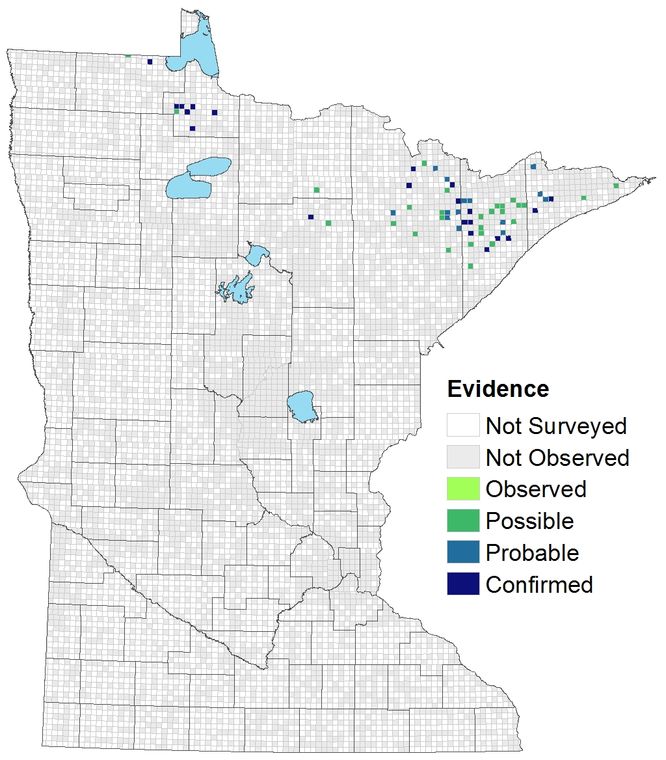 Breeding distribution of the Spruce Grouse in Minnesota based on the Breeding Bird Atlas (2009 – 2013).

Summary statistics of observations by breeding status category for the Spruce Grouse in Minnesota based on all blocks (each 5 km x 5 km) surveyed during the Breeding Bird Atlas (2009-2013).

Summary statistics for the Spruce Grouse observations by breeding status category for all blocks and priority blocks (each 5 km x 5 km) surveyed during the Minnesota Breeding Bird Atlas (2009-2013).

Spruce Grouse are primarily found in coniferous forests of pine and spruce but also use balsam or cedar, especially in recently burned areas and young successional stages (Figure 3). Boag and Schroeder (1992) suggest that the species prefers areas following fire, especially jack and lodgepole pine forest types. They also emphasize the importance of forest fires that leave islands of habitat in a mosaic across the landscape. More specifically, Haas (1974) and Boag and Schroeder (1992) stated the species prefers relatively young, dense successional stands (2,500 to 3,500 stems per ha), 7 to 14 m in height, and with a relatively well-developed middle story.

The descriptions of breeding habitat used by Spruce Grouse in Minnesota are confusing. Roberts (1932) included a long and detailed but eloquent description of the “Courting of the Spruce Grouse” abstracted from notes by Walter Breckenridge. He described the breeding habitat as “spruce swamps among the Laurentian hills that lie along the Canadian boundary lakes.” Furthermore, he noted “typical black spruce and cedar swamp flora with its ground-covering of sphagnum, Labrador tea, leatherleaf, and associated northern plants” and that “rocky outcroppings in and about the swamp were covered largely with spruce and jack-pine.” Stenlund and Magnus (1951) emphasized jack pine followed by black spruce, balsam, and tamarack in that order in their description of Spruce Grouse habitat. In contrast, Anderson (1973) and Haas (1974) both described breeding habitat as black spruce forest types. Zlonis et al. (2017), in a recent modeling effort, found Spruce Grouse in the Agassiz Lowlands Subsection of northern Minnesota highly associated with large patches of black spruce habitat.

The confusion on what forest types are used by Spruce Grouse was highlighted by Roy et al. (2017) in their study of the species in Minnesota. They recognized the conflicts in the literature describing Spruce Grouse breeding habitat in Minnesota, especially forest ages used by the species. Therefore, when they began their study in 2014, they initially included jack pine, black spruce, tamarack, and white cedar and all stand ages. White cedar was added because of specific interest by managers in this type. In 2015 they decided to also add balsam fir and red pine forest types because of detections in these types in 2014, and white spruce because of reported use by Spruce Grouse. Their future work will be of considerable use in deciphering the breeding habitat used by this elusive species.

Chartier et al. (2013) emphasized that landscape heterogeneity is important to Spruce Grouse because they historically were found in a disturbance matrix created by insect pests like spruce budworm and forest fire. They recommended conservation efforts be directed toward maintaining coniferous habitats affected by natural disturbances. 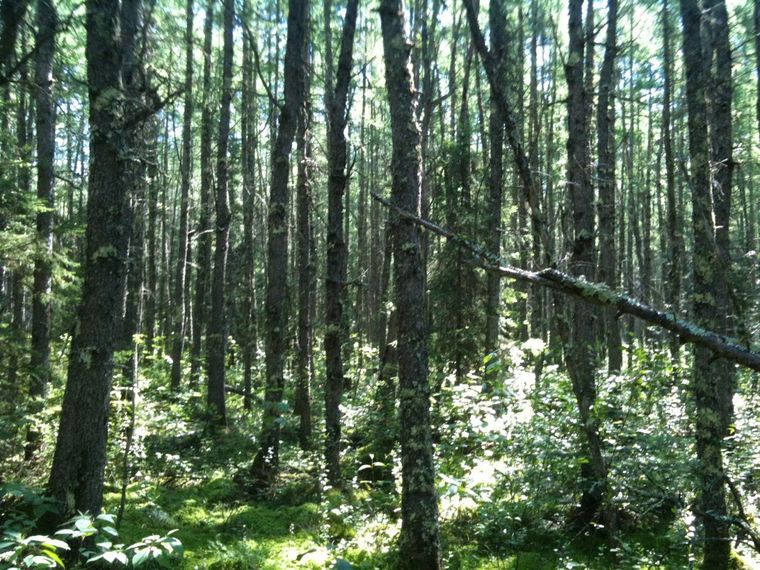 Partners in Flight estimated a global population of 11 million breeding adults, which reflects its population in the United States and Canada, where it is exclusively found (Rosenberg et al. 2016). Environment Canada (2014), however, estimated a population ranging from 5 to 50 million adults in Canada.

Boag and Schroeder (1992) reported population densities ranging from 0 to 83 birds per 100 ha in Ontario, and from 0 to 50 birds per 100 ha in Alaska, but they also state there are many reports of densities of less than 10 birds per 100 ha. Hence, populations can vary considerably, but they generally are quite low, and the species is hard to census because the birds do not vocalize, nor do they flush easily. “Wing-clap” playbacks and line transects with dogs have been used to estimate population sizes (Boag and Schroeder 1992). Minnesota birds do not “wing-clap” which is a trait of the western subspecies. Roy et al. (2017) are in the process of examining the efficacy of two field methods to census Spruce Grouse in Minnesota: the female cantus-call survey and a fecal pellet survey.

With its Continental Concern Score of 7/20, the Spruce Grouse is not considered to be a species of concern in North America (Rosenberg et al. 2016). This is primarily due to its estimated population increase and its wide distribution across the Canadian boreal forest. It is considered the most widely distributed grouse species in North America (Robinson 1980). The Minnesota Department of Natural Resources (2015) classified the species as a Species in Greatest Conservation Need primarily because of loss of coniferous forests and their fragmentation. Environment Canada (2014) considered the species to be secure in Canada.

Boag and Schroeder (1992) noted that modern forestry practices with the creation of open clear-cuts and subsequent single species plantations reduce Spruce Grouse populations and can eliminate them entirely. Szuba and Bendell (1983) suggested that forest practices can be beneficial to Spruce Grouse by mimicking fire and by keeping clear-cut areas small and interspersed with optimal habitat.

Canada (Environment Canada 2014) has identified a number of Bird Conservation Regional Strategies, many of which provide specific benefits for Spruce Grouse. Similarly, the Minnesota Department of Natural Resources (2015), in their State Wildlife Action Plan, have identified a number of Conservation Focus Areas that also have the potential to provide improved habitat conditions for the species. Even though it has not recovered much of its former range in Minnesota or in many others areas of North America, by most accounts, the Spruce Grouse is currently secure and its population is increasing. Hence, there is some optimism that this emblematic species of the dense north woods has a reasonable future in Minnesota. Yet, the reduction in coniferous forests as well as a less than an optimal thermal regime in the state with future climate change renders its future more precarious.