A regular summer resident and migrant; late migrants have been reported in early winter. The Turkey Vulture was common during the Minnesota Breeding Bird Atlas (MNBBA).

A widely distributed species throughout most of North America from southern Canada to southernmost South America. Turkey Vultures are rare in the open regions of western North America and most abundant in Texas, the southeastern United States, and parts of California (Figure 1).

Carrion, sometimes fruit; rarely a predator on vertebrates and insects.

On the ground, rock ledges, broken tree tops, and abandoned buildings, and in caves and hollow trees. 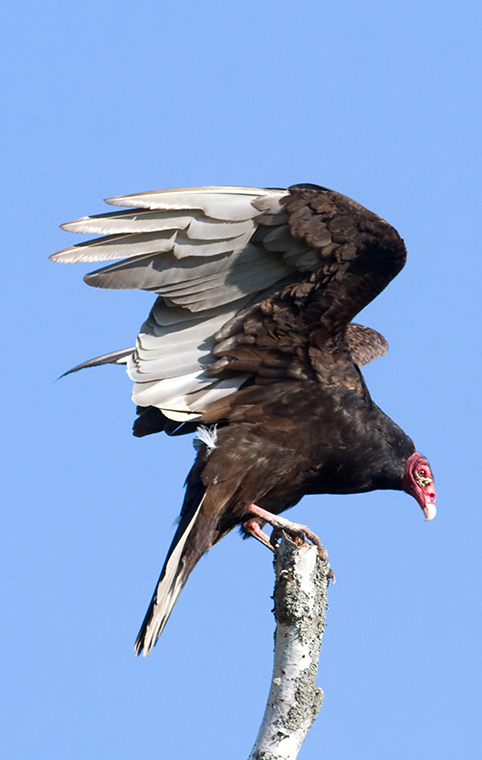 Breeding distribution and relative abundance of the Turkey Vulture in North America based on the federal Breeding Bird Survey, 2011–2015 (Sauer et al. 2017).

Historically, the Turkey Vulture has bred locally throughout the state. As of the 1930s, Roberts (1932) reported that it “was formerly more common in Minnesota” but “still to be seen in fair numbers throughout the state, reaching the Canadian boundary from Kittson County in the west to Lake Superior in the east.” He cited several accounts from the late 1800s that indicated the species was at least locally abundant throughout many parts of Minnesota. He described Turkey Vultures as “abundant; breeds” in east-central Minnesota in 1870; “very common” in the Red River valley in 1885; and “seen every hour in the day, sometimes several together” in Otter Tail County in 1893. A stronghold appears to have been southeastern Minnesota, along the Mississippi River and along the cliffs in Houston, Fillmore, and Winona Counties, and also along the St. Croix River.

Roberts noted several confirmed breeding records, including from Becker (eggs), Jackson (nest with young bird and infertile egg), and Nicollet (2 eggs) Counties. He included several 19th-century observations of nesting, which were simply attributed to Hatch in Hennepin and Traverse Counties, but there were no details in Hatch’s 1892 summary Notes on the Birds of Minnesota.

Green and Janssen (1975) and Janssen (1987) stated that the primary breeding range was the forested regions of northern Minnesota and the Mississippi and St. Croix River valleys. Johnson (1982) identified nesting records in the Flicker and The Loon from Clearwater County “around” 1930 and in 1965, from Beltrami County in 1951, and from St. Louis County in 1956. Confirmed nesting records since 1970 have been documented from 10 counties, including Beltrami and Clearwater Counties in the northwest; Aitkin, St. Louis, and Lake Counties in the northeast; Fillmore, Olmsted, and Wabasha Counties in the southeast; and Ramsey and Renville Counties (Johnson 1982; Hertzel and Janssen 1998).

The MNBBA documented the substantial population and distribution in Minnesota, consistent with the increase that has occurred throughout much of North America over the past 40 years. MNBBA records of the Turkey Vulture were carefully reviewed and scrutinized because although the bird is easily observed flying overhead, determining whether these observations imply breeding evidence can be difficult. Many probable and possible records were converted to observations, especially if details were lacking.

Roberts (1932) did not provide insight on the reasons for the apparent decline of the Turkey Vulture in Minnesota from the late 1800s to the 1930s. Kirk and Mossman (1998), in their review of the Turkey Vulture in North America, suggested that increases in human settlement, expanded agriculture, the species’ avoidance of human disturbance, and human persecution all likely contributed to this decline. Beginning between 1920 to 1940 and continuing into the 1990s, the species’ distribution began to expand northward in the Midwest and the Northeast and into eastern Canada. The observations during breeding bird atlases completed in Michigan, Ontario, and Wisconsin all strongly supported the substantial increases in the Turkey Vulture’s distribution and population in this region (Cadman et al. 2007; Cutright et al. 2006; Chartier et al. 2013). Chartier et al. (2013) emphasized that its “population increase is real and not an artifact of sampling—the same protocol was used for both Atlas efforts.”

The range and population expansion was largely attributed to increased road building resulting in a steady supply of carrion, increased deer populations, openings created by logging activity, and warming temperatures, which facilitate movement and increased survival northward (Kirk and Mossman 1998). 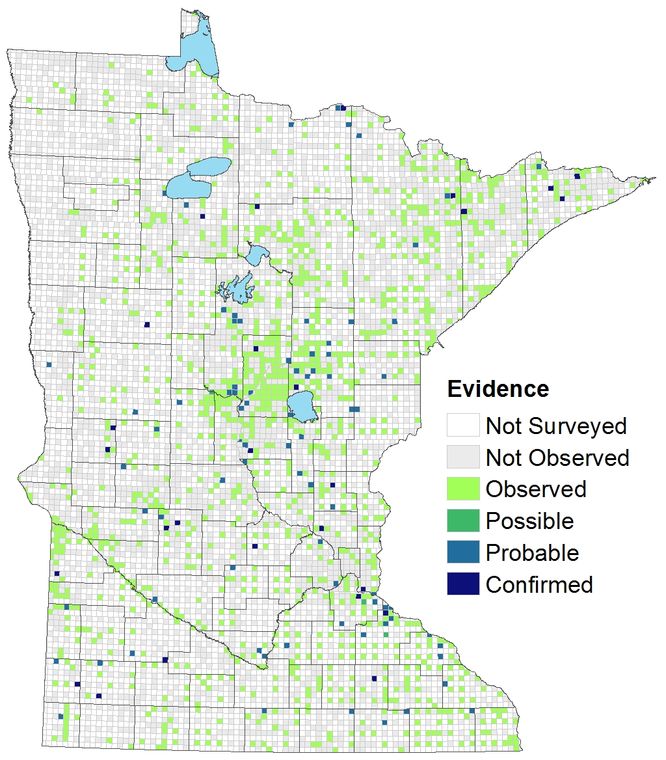 Breeding distribution of the Turkey Vulture in Minnesota based on the Breeding Bird Atlas (2009 – 2013).

Summary statistics of observations by breeding status category for the Turkey Vulture in Minnesota based on all blocks (each 5 km x 5 km) surveyed during the Breeding Bird Atlas (2009-2013).

Summary statistics for the Turkey Vulture observations by breeding status category for all blocks and priority blocks (each 5 km x 5 km) surveyed during the Minnesota Breeding Bird Atlas (2009-2013).

Turkey Vultures prefer a mix of open country and forested areas that provide a combination of both open foraging areas and isolated nesting opportunities, especially those away from human disturbance (Mossman and Hartman 1992; Kirk and Mossman 1998). They tend to avoid open cropland. They use large trees or cliffs free from disturbance for communal roosting, often located in hilly country that provides updrafts for flight. Turkey Vultures commonly are observed foraging near streams, lakes, and roads in search of carrion. As stated above, Turkey Vultures nest in a variety of locations including on the ground, on rock ledges, on broken tree tops, and frequently in abandoned buildings, and in caves and hollow trees (Figure 4).

Johnson (1982) pointed out that Roberts (1932) found the species present along the Red River valley in northwestern Minnesota, but much of this habitat has now been eliminated by agriculture and urbanization. Turkey Vultures were observed in this region, but observations were sparse, especially in Clay, Marshall, and Polk Counties near the Red River. 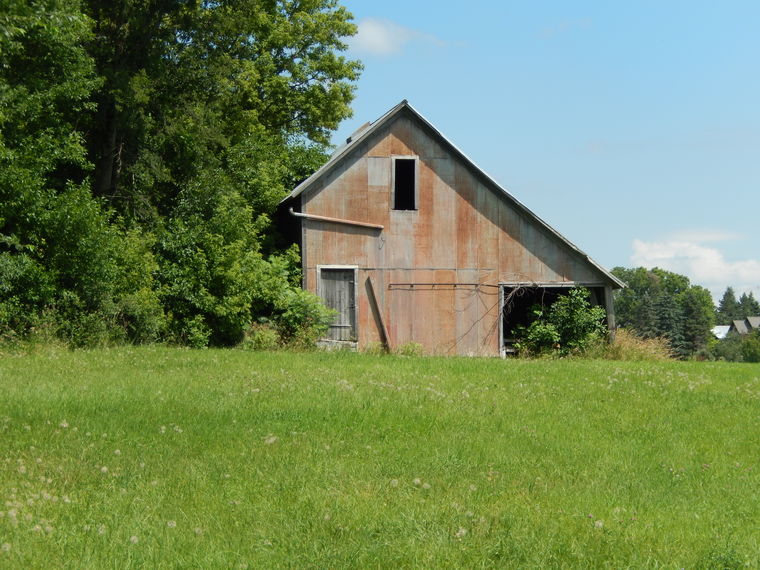 Besides forested areas, Turkey Vultures often use old farm structures for nesting such as barns and sheds, or old houses. Here is a typical example of a suitable structure in Minnesota (© Lee A. Pfannmuller).

Population trends were deemed unreliable for Minnesota based on the federal Breeding Bird Surveys (BBS), but the Central BBS Region illustrated a substantial increasing trend of 1.88% per year from 1966 to 2015 (Figure 5).

Population densities are very difficult to assess, but Kirk and Mossman (1998) reported a density estimate of 0.35 nests per km2 in southern Wisconsin. 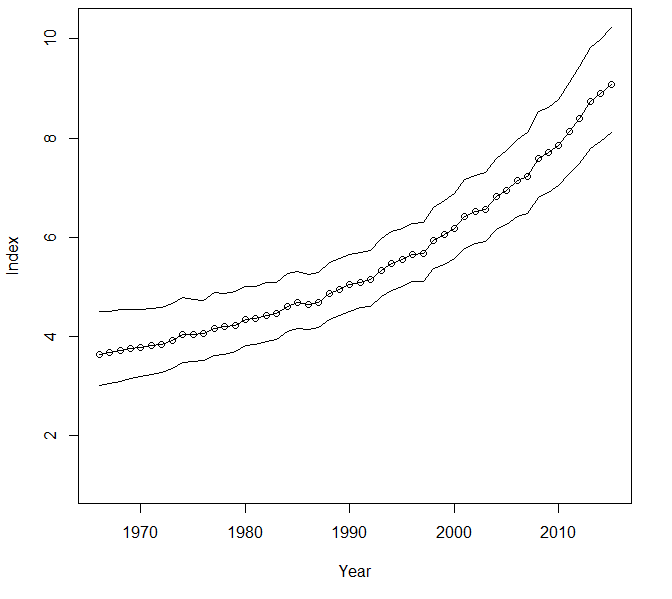 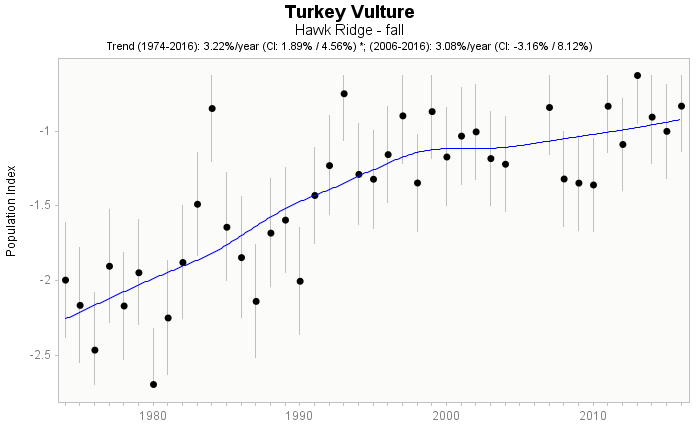 Fall migration counts of the Turkey Vulture at Hawk Ridge, Duluth, Minnesota, as calculated by the Raptor Population Index from 1974 to 2016.

The Turkey Vulture’s Continental Concern Score of 5/20 was one of the lowest scores reported for any native North American bird species (Rosenberg et al. 2016). The species’ substantial breeding population, its population increase and range expansions, and its wide distribution in the Americas renders it of little conservation concern.

As a carrion forager, the Turkey Vulture experienced egg-shell thinning due to increased loads of DDT, DDE, and other organochlorine compounds, but the extent to which populations were affected is unclear (Farmer et al. 2008). Habitat changes have continued, but shooting of Turkey Vultures has declined with educational programs that have emphasized the lack of harm this species has on humans and livestock.

The species was placed on Audubon’s Blue List in 1972 and 1980, but currently is a species of least concern globally and not listed as a species of concern in the United States or Canada (Farmer et al. 2008). It greatly benefits from human activities, such as garbage dumps, livestock operations, fishing, and especially road networks and roadkills, though vehicle collisions kill many vultures. It should be considered a valuable species that cleans up many of the unwanted items humans leave across the countryside.

Given its wide distribution across North, Central, and South America, the Turkey Vulture is not predicted to be affected by climate change. Rather the species’ distribution will likely expand farther northward.