A regular breeding species and migrant. Rare reports during the winter season, mostly of late migrants. The Western Grebe was a rare bird during the Minnesota Breeding Bird Atlas (MNBBA).

As its name implies, the Western Grebe is confined to the western United States and the southern half of the western Canadian Prairie Provinces. Minnesota is on the eastern periphery of its range. A colonial species, there are scattered pockets of abundance throughout its breeding range (Figure 1). Note that Figure 1 combines data for the Western Grebe and Clark’s Grebe. The latter was only identified as a separate species in 1985.

Assigned a Continental Concern Score of 13/20 by Partners in Flight and ranked as a species of Moderate Concern by the North American Waterbird Conservation Plan; designated a Species of Greatest Conservation Need in Minnesota.

Short- to medium-distance migrant; many northern birds winter along the Pacific coast. Southern and far-western populations are permanent residents.

A diver that feeds primarily on fish.

A platform of aquatic vegetation that is usually floating in open water but anchored to emergent or submerged vegetation. 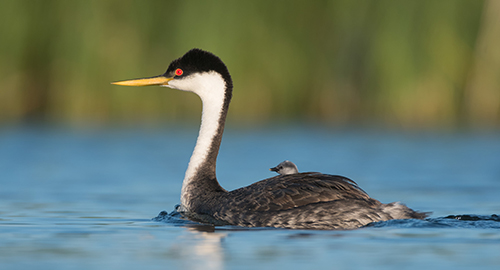 Breeding distribution and relative abundance of the Western and Clark’s Grebe in North America based on the federal Breeding Bird Survey from 2011 to 2015 (Sauer et al. 2017).

Roberts’s 1932 account of the Western Grebe is brief. He considered it a “rare summer resident” that occurred “irregularly and in limited numbers” along the western border of the state, from Iowa to the Canadian border. At the time there were but 2 nesting records from the late 1800s, both from Heron Lake in Jackson County. The birds continued to be sighted there until 1923. Since Roberts’s time, however, there have been only intermittent reports of the grebe’s presence on the lake (e.g., Koster 1995).

More than 30 years passed before the species was observed nesting at a new location, Lake Traverse in Traverse County in 1935. A total of 9 nests were counted at the site the following year. Additional reports later surfaced from Swan Lake in Nicollet County (1961), Frog Lake in Stevens County (1962), Agassiz National Wildlife Refuge in Marshall County (1969), and Sundberg Lake in Kandiyohi County (1970). Details of each record were discussed in a status summary of Minnesota’s Western Grebes by Burger in 1971. In addition to these new nesting records, the number of migrants passing through the state was increasing, most notably since 1960. Burger’s (1971) overall assessment was that the Western Grebe was increasing in numbers as it expanded eastward into suitable wetland habitat.

Little had changed by the time that Green and Janssen published their updated account in 1975. At about the same time, the newly established Nongame Wildlife Program in the Minnesota Department of Natural Resources launched an initiative to assess the status and distribution of all colonial waterbirds nesting in the state. They augmented a limited number of field surveys with field reports collected from an extensive network of natural resource professionals, professors, birders, and students throughout the state. In their first in-house report in 1977, 20 active Western Grebe colonies were identified (Henderson 1977); three years later, in 1980, the number had increased to 24 (Henderson and Hirsch 1980). A final summary report published in 1985 identified a total of 29 colonies in 17 counties that were active at least one year between 1981 and 1983. Seven of the colonies were located in Big Stone County, and all but 4 of the colonies numbered 50 or fewer nesting pairs. The largest nesting colony was located on Lake Osakis in Todd County and numbered over 200 nesting pairs in 1981 (Guertin and Pfannmuller 1985).

When Janssen (1987) published his updated account, Western Grebes had been documented nesting in 24 of Minnesota’s 87 counties since 1970. Nesting records stretched as far south as Freeborn County in south-central Minnesota and as far east as Hennepin County in east-central Minnesota. In 1998, Hertzel and Janssen (1998) added another 11 counties to the list, further expanding the species’ range eastward to Anoka County in the Twin Cities metropolitan region and to Crow Wing County in northern Minnesota.

Field surveys conducted by the Minnesota Biological Survey (MBS) beginning in the late 1980s documented 48 breeding season locations for the Western Grebe. All but 3 of the locations were confined to the Prairie Parklands and Tallgrass Aspen Parklands ecological provinces, suggesting the species might be retreating westward again (Minnesota Department of Natural Resources 2015).

During the MNBBA, observers reported Western Grebes in 53 of the surveyed atlas blocks and in 33 of the priority atlas blocks. Breeding was confirmed in only 7 blocks (Figures 2 and 3; Table 1). The birds were observed in 27 of Minnesota’s 87 counties and were confirmed breeding in 5 counties. Unlike the absence of reports in the Twin Cities metropolitan region documented by the MBS, 3 of the atlas reports came from the outlying metropolitan counties of Isanti and Wright; there also was 1 “possible” report from a block in northeastern Cass County that also straddled Itasca County. The species was locally abundant in west-central Minnesota but absent from much of southwestern, southeastern, north-central, and northeastern Minnesota. Of the five grebe species that were observed during the MNBBA, Western Grebes comprised only 5.4% of the atlas block records. The Pied-billed Grebe and Red-necked Grebe together accounted for 93% of all observations.

Because none of the MNBBA records included estimates of numbers, it is difficult to ascertain whether populations have changed in recent decades. Clearly the Western Grebe remains more widely distributed than Roberts was able to document in the early 1900s. Elsewhere within its breeding range, the only notable, wide-scale change in the grebe’s distribution has been an expansion in the lower Colorado River valley, where the species is nesting in wetlands on large reservoirs (LaPorte et al. 2013). West of Minnesota, South Dakota documented a substantial increase in the number of Western Grebe colonies between their first and second atlas. During their first atlas (1988–1992), the species was considered rare and local in abundance; during their second atlas (2009–2012) between 40 to 45 nesting colonies were documented each year. The first atlas was conducted during a dry period; the second atlas was conducted during a wet period (Drilling et al. 2016). 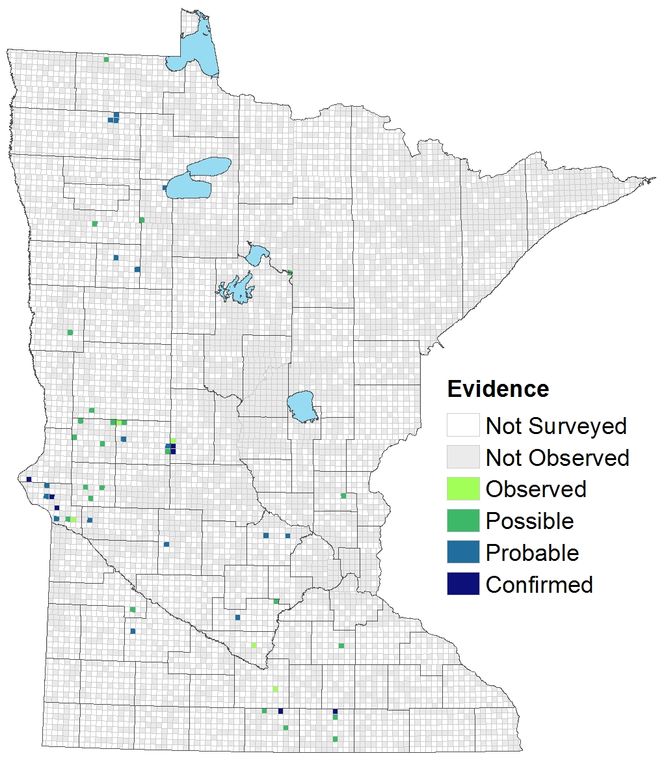 Breeding distribution of the Western Grebe in Minnesota based on the Breeding Bird Atlas (2009 – 2013).

Summary statistics of observations by breeding status category for the Western Grebe in Minnesota based on all blocks (each 5 km x 5 km) surveyed during the Breeding Bird Atlas (2009-2013).

Summary statistics for the Western Grebe observations by breeding status category for all blocks and priority blocks (each 5 km x 5 km) surveyed during the Minnesota Breeding Bird Atlas (2009-2013).

Western Grebes utilize large, semipermanent or permanent freshwater wetlands with extensive beds of emergent vegetation well interspersed with open water (Figure 4). Bulrushes and phragmites are generally preferred to cattails (Nuechterlein 1975). Dense stands of submerged vegetation, such as milfoil and pondweed, also may be used. Burger (1971) described wetlands used in Minnesota as having extensive areas of open water bordered by bulrushes and cattails. Nesting areas that she examined suggested the birds preferred nesting in the inlet bays to the wetlands where the vegetation was more sparsely distributed. Water depths were usually greater than 25 cm. 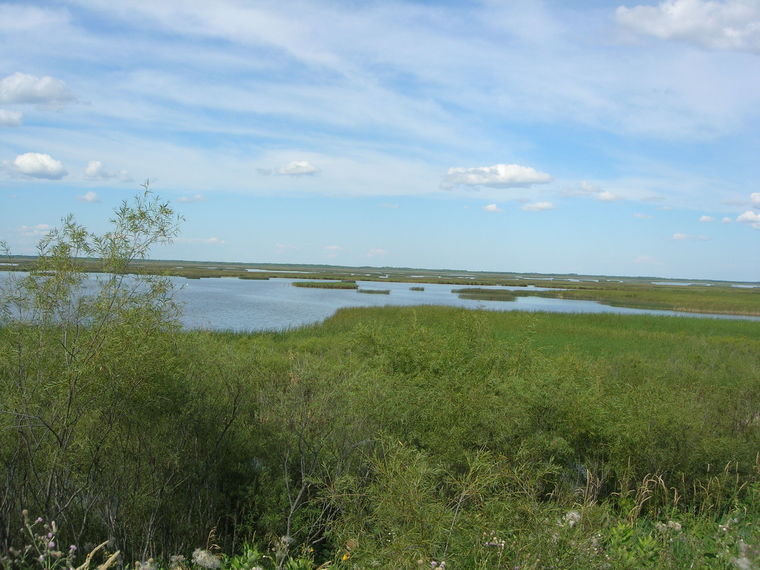 Although the federal Breeding Bird Survey (BBS) has recognized limitations for monitoring wetland species, particularly those that are colonial, it is the only long-term effort to monitor breeding populations throughout the species’ range. These data, collected since 1966, show a steep decline in the early years of the survey and a small, albeit erratic, increase in recent years (Figure 5). Overall, from 1966 to 2015, the trend is a nonsignificant annual decrease of 2.04% per year. Because Clark’s Grebe was recognized as a distinct species in 1985, the BBS data included both species (Sauer et al. 2017). Unfortunately Western Grebes are not effectively monitored by the BBS in Minnesota.

The only other long-term population data available for the Western Grebe are the National Audubon Society’s Christmas Bird Counts (National Audubon Society 2015a). Data have been reported separately for Clark’s and Western Grebes since at least the early 1980s. The reliability of observers’ differentiation between the two species, particularly in coastal waters during the winter, can be reasonably questioned. Yet, given the rarity of Clark’s Grebe, it may be a minor error. Regardless, if one examines only the data reported for Western Grebes since 1970, the results show a long-term decline (Figure 6). However, since 1980, the results for Clark’s Grebe show an increase (Figure 7), so some of the decline in Western Grebes may be attributed to reporting the number of Clark’s Grebes separately. But Western Grebes are far more numerous than Clark’s Grebe, so the decline cannot be attributed solely to counting the two species separately. Indeed, since 2005 the Christmas Bird Count numbers for Western Grebes have declined nearly 50% from numbers reported in earlier decades (LaPorte et al. 2013).

Explanations for this decline are not readily apparent. Numbers wintering in Puget Sound reportedly declined 50% to 90% from the 1970s to the early 2000s. At the same time, numbers began increasing along the California coastline in the mid-1990s, an area where winter food supplies are abundant (LaPorte et al. 2013). The lack of any counts or even estimates of breeding populations at some of the major colonies in Minnesota makes it difficult to ascertain whether the broad national trends are also apparent here. 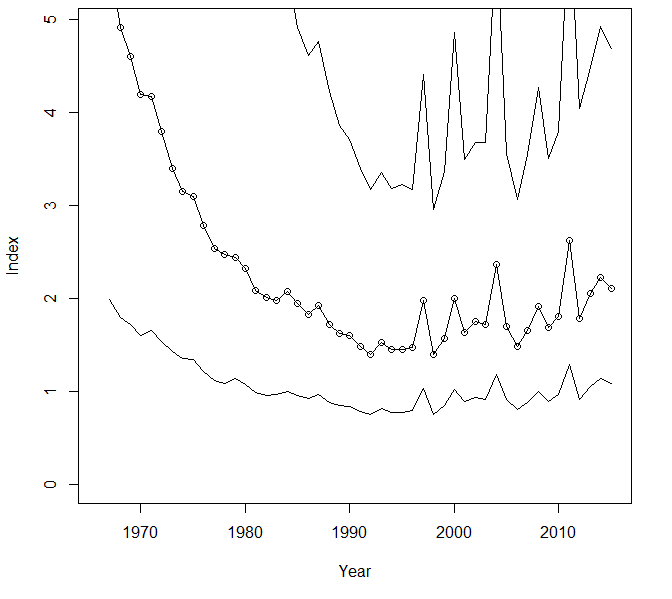 Combined breeding population trend for the Western Grebe and Clark’s Grebe in North America for 1966–2015 based on the federal Breeding Bird Survey (Sauer et al. 2017). 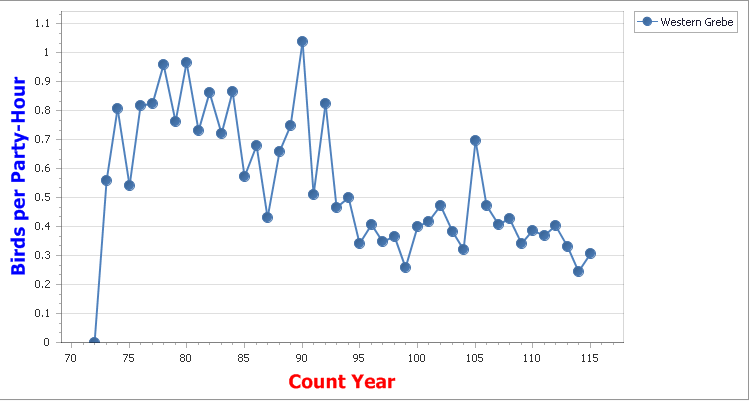 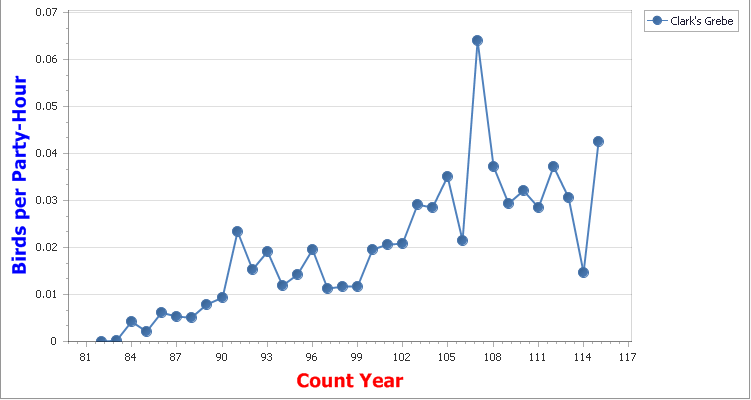 The North American Waterbird Conservation Plan (Kushlan et al. 2002) rated the Western Grebe as a species of Moderate Concern; the regional waterbird plan for the Northern Prairie and Parkland Region, one of the core areas where populations are most dense, rated the grebe a species of High Concern (Beyersbergen et al. 2004). It also has been assigned a relatively high Continental Concern Score of 13/20 (Partners in Flight 2017). Threats to its breeding and nonbreeding habitat are considered major concerns and are the prime reasons for these designations. These factors coupled with the species’ rarity in Minnesota prompted its designation as a Species of Greatest Conservation Concern (Minnesota Department of Natural Resources 2015).

Massacred by the thousands in the late 1800s and early 1900s for its silky white neck and belly feathers, prized for coats and hats, many large colonies in the West were decimated. Although the population recovered, concern remains regarding the species’ status. On the breeding grounds, loss and degradation of wetland habitats are a major concern. Wetland conservation policies as well as focused, on-the-ground conservation measures are strengths of natural resource efforts in Minnesota and may stem the tide of wetland loss. Recent efforts focused on wetland and grassland conservation guided by the Minnesota Prairie Landscape Conservation Plan are noteworthy (Minnesota Prairie Plan Working Group 2011). Because there is no long-term monitoring that effectively assesses the status of Minnesota’s population, periodic counts at some of the largest colonies, such as Lake Osakis, would provide essential data on this rare wetland species.

In its coastal wintering habitat, oil spills and gill nets are major sources of mortality. In 2005 alone, nearly 2,500 Western Grebes were killed by an oil spill in northern California (LaPorte et al. 2013).

Specific management recommendations that should be considered on the breeding grounds include maintaining stable water levels during the course of the breeding season and reducing disturbances to nesting colonies. Colonies on lakes that are heavily used for water-based recreation are vulnerable. Closing stands of emergent vegetation during the nesting season could help reduce disturbance and nesting failures.

Like all wetland-dependent species, climate change is predicted to have a significant impact on the distribution and abundance of wetland habitats and the rich diversity of species they support. The 2010 “State of the Birds” report projected that the number of wetlands in the Prairie Pothole Region alone could decline by two-thirds (North American Bird Conservation Initiative 2010). A recent modeling exercise by the National Audubon Society examined species distribution, abundance, and climate data for 588 North American birds. The Western Grebe was classified a “climate endangered” species, as modeling results predicted a loss of 96% of the species’ current summer habitat by the year 2080 (Langham et al. 2015; National Audubon Society 2015b). The future of an entire suite of wetland-dependent species requires vigilant attention to reduce the potential loss of wetlands in the wake of climate change.