A summer vagrant and regular migrant; the Willet bred once in Minnesota, from 1931–33.

The Willet has two “disjunct breeding populations differing in ecology, in morphology, and subtly in vocalizations. Populations breeding inland, primarily freshwater habitats of western states and provinces belong to the subspecies [T.] semipalmatus inornatus or Western Willet. Populations breeding in the marshes of the Atlantic coast, from New Brunswick to Tamaulipas, belong to the subspecies [T.] s. semipalmatus or Eastern Willet” (Lowther et al. 2001). The eastern population breeds locally along the entire Atlantic coast from all the Maritime provinces (Stewart et al. 2015) to Florida, where it nests on both the Atlantic and Gulf coasts. Its breeding range continues along the Gulf coast to Louisiana and Texas (Melvin 2006). It is also found in the West Indies, coastal Mexico, and locally in northern South America. The western population can be found in the grasslands of the Prairie Provinces of Alberta to Manitoba, south through the Dakotas to northern Nebraska, and west to northern California. Pockets of high abundance can be found throughout the species’ breeding range (Figure 1).

Designated a species of High Concern by the U.S. Shorebird Conservation Plan; assigned a Continental Concern Score of 14/20 by Partners in Flight.

May be a short- to long-distance migrant depending on how far birds travel to their wintering grounds. Birds in the West Indies are permanent residents. The winter range of the two subspecies has not been reliably delineated, but birds are found along the southern coasts of its eastern breeding range, from Virginia to Texas, and along the coasts of California, Mexico, and northern South America.

Feeds primarily on insects, crustaceans, and, along the coasts, marine worms; may also take small fish and some vegetation.

Ground nest lined with grasses or pebbles; when placed within marshes, nests are hidden by surrounding vegetation. 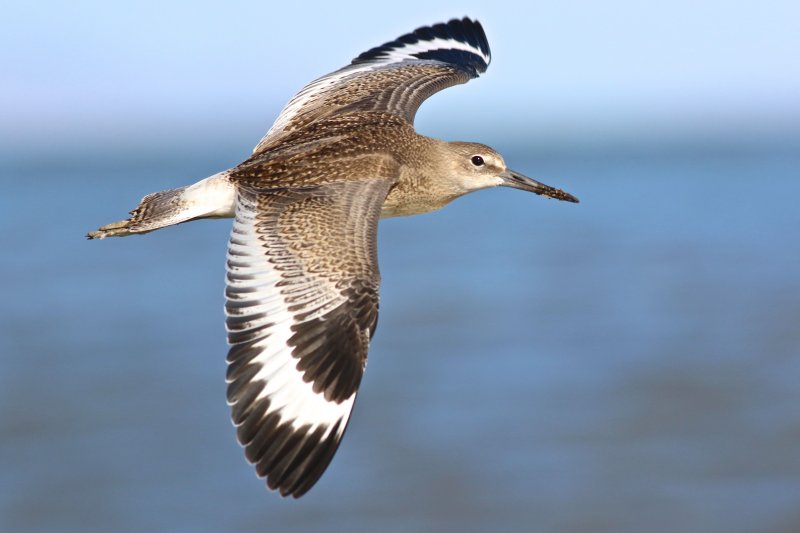 Breeding distribution and relative abundance of the Willet in North America based on the federal Breeding Bird Survey, 2011–2015 (Sauer et al. 2017).

Roberts knew this species from his first natural history summer trip as a young man to the prairie in 1879, when he and a companion visited Grant and Traverse Counties on June 5–21 (Krosch 1987). At this time the prairie was beginning to be settled by homesteaders and accessed by railroads. His notes about the Willet included two entries in his diary. The first was on June 16 at Lake Traverse: “A pair of willets made much ado and evidently has a nest in a marsh along the lake”; and the second on June 20 near Herman, Grant County: “pair of Willets that seemed to have a nest” (Roberts [1858-1946] 1991). A complete narrative and bird list of this trip were published in the Bulletin of the Nuttall Ornithological Club (1880) and reprinted in The Loon (Roberts and Benner 1987). In the list Roberts described the Willet as “common and breeding.” Many years later, when he wrote his definitive book on Minnesota birds, he listed those two breeding observations plus another from Cantwell, who “states that in May, 1889, it was numerous in Lac qui Parle County and one collected May 16 contained an egg ready to be deposited” (Roberts 1932). Roberts concluded that since about 1909, “it has almost entirely disappeared from the state.” He listed several migrant records from the 1920s.

The only modern breeding record of a Willet for Minnesota was obtained in 1931, 1932, and 1933 in western Swift County. Documented because of the field perseverance and bird knowledge of two small-town women and an adventurous boy, the location was on the Pomme de Terre River “four miles west of Halloway.” On July 26, 1931, “Mr. Peterson of Pipestone visited the locality where these birds were seen by Mrs. Wilson [July 5, 1931] and found there three Willets, one adult and two young. . . . A farmer boy living nearby said that he had found the nest at an earlier date on an island in the river. It contained two eggs only” (Roberts 1932). In 1932, “in the same locality where this species nested in 1931, two adult Willets and one downy young were found on June 24, 1932, by Mrs. C. E. Peterson and Mrs. E. O. Wilson; and again the next year, on June 2, Mrs. Peterson reported finding a pair at the same place” (Roberts 1936). This record was also documented in The Flicker (Risser 1932).

The Minnesota Ornithologists’ Union’s (MOU) seasonal reports from 1961 to 2015 show the Willet as a regular migrant in Minnesota, encountered more frequently in the spring than in the fall. Most records are from the southern half of the state and the northwestern prairie counties, where spring flocks of from 30 to 80 birds occasionally have been seen (Bardon 2002a). Nevertheless, as a migrant the Willet can be found anywhere in the state where there is shorebird habitat, especially at Duluth, where it is regular in the spring, including flocks (3 records of 15 to 25 birds), and occasional in the fall. Because the Willet is so common during migration, which may end in mid-June for spring migrants and begin again in early July for fall migrants, it is difficult to determine if summering birds are migrants or possibly near a nesting site (Bardon 2002b). Using a cautious approach for dates, with a summer gap of June 10–30 between spring and fall migration, there are several periods when Willets were reported in appropriate nesting situations in prairie counties. These were from 1961 to 1966 (mostly Salt Lake, Lac qui Parle County); 1970–1980 (Marshall, Swift, Traverse, and Wilkin Counties); 2002–2006 (Becker, Lac qui Parle, Marshall, and Traverse Counties). Breeding evidence, however, was never obtained. More investigation is still warranted in appropriate landscapes in Minnesota. There are persistent breeding populations in South Dakota, including in counties adjacent to Minnesota (Drilling et al. 2016; Peterson 1995; Tallman et al. 2002), and in North Dakota (Stewart 1975; North Dakota Game and Fish Department 2015). The literature from other states adjacent to Minnesota does not show evidence of nesting. The 1 record from Iowa in 1900 is considered doubtful (Kent and Dinsmore 1996), and in Wisconsin there are 3 records of summer vagrants (Robbins 1991).

MNBBA participants reported just 2 possible records: 1 in 2011, and 1 in 2013. Both were in early June and thus could still be spring migrants. They were seen in appropriate habitat in Big Stone County (T121R46a) and Lac qui Parle County (T120R45a), where many of the June records discussed above were obtained. About 20 miles east, in adjacent Swift County, is the locality where the 1 breeding record for Minnesota was obtained in 1931–1933. 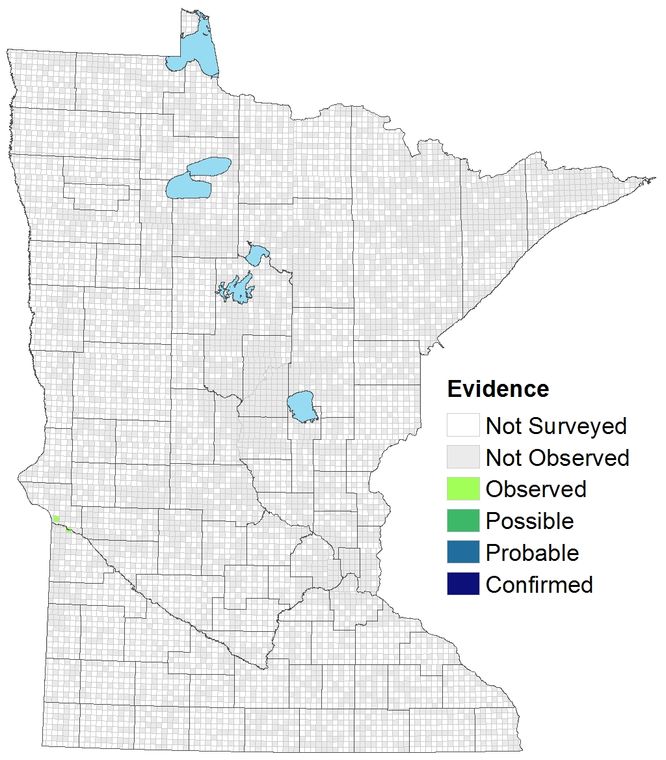 Breeding distribution of the Willet in Minnesota based on the Breeding Bird Atlas (2009 – 2013).

Summary statistics for the Willet observations by breeding status category for all blocks and priority blocks (each 5 km x 5 km) surveyed during the Minnesota Breeding Bird Atlas (2009-2013).

Along the Atlantic Seaboard, the Willet nests in coastal marshes and on barrier islands and beaches. Similarly, along the Gulf coast, breeding pairs “inhabit salt marshes composed of Spartina alterniflora” as well as sand dunes with clumps of beach grass or sea oats (Melvin 2006). During the breeding season, they may be found foraging on the beach surf edge. A description of the preferred habitat on the interior western prairies says the following: “expanses of short, sparse grasslands, particularly native grasslands are important for nesting and foraging. Prefer idle grassland during nesting, and to a lesser extent grazed pasture, compared to other land uses such as hayland and cropland. . . . A variety of wetland complexes of ephemeral, temporary, seasonal, semi-permanent, permanent wetlands, and intermittent streams used for foraging. Avoid wetlands with dense, emergent vegetation, and prefer shallow-water areas with sparse shoreline vegetation” (North Dakota Game and Fish Department 2015). Brackish or saline wetlands, and alkali flats may also be used in the Great Plains and Great Basin (Lowther et al. 2001). Lowther and his colleagues (2001) characterize the habitats of the eastern and western subspecies as differing in two key respects: “Eastern Willets often have abundant food resources but limited nesting habitat, while Western Willets often have abundant nesting habitat but unpredictable food resources, depending on wetland availability and drought.”

The U.S. Shorebird Conservation Plan (Brown et al. 2001) gives an estimate of the North American population as 160,000 birds with a confidence rating of “poor.” The species account on the Birds of North America website (Lowther et al. 2001) states that “recent estimates suggest total population of 250,000 with approximately 10% breeding in Canada” and gives estimates for the eastern subspecies, including the Maritime provinces, of 90,000 birds, and for the western subspecies, including Canadian Prairie provinces, of 160,000. A more recent review of the population estimates of North American shorebirds concluded that in the absence of new information the estimate of 90,000 birds in the East and 160,000 in the West was retained (Andres et al. 2012). Nearly 50% of the Willet population breeds in the Prairie Pothole Region (North Dakota Game and Fish Department 2015).

The federal Breeding Bird Survey (BBS) annual trend results for North Dakota from 1966 to 2015 demonstrated a nonsignificant annual decline of 0.32% (Sauer et al. 2017). The trend results for the United States and survey-wide also are stable, with a small decline in the early years of the survey that appears to have stabilized in more recent years. The results for the Prairie Pothole Region may be the best indicator of the regional population trend for the western subspecies in the northern Great Plains. BBS data in this region show a significant annual decline of 0.72% per year from 1966 to 2015 (Figure 3). The U.S. Shorebird Conservation Plan (Brown et al. 2001) considered the Prairie Pothole Region important for the Willet, and it is described as common or locally abundant there during breeding and migration. The loss of wetlands and grasslands is likely the primary factor responsible for the decline. Even when wetland complexes are protected and managed for waterfowl, they are only suitable if they provide “shallow water and little vegetation at edges, not steep slopes or cattails” (Lowther et al. 2001).

The eastern Willet population was almost extirpated from its range along the Atlantic coast by market hunters who sought its tasty flesh and eggs in the late 19th and early 20th centuries. Protection was finally obtained under the Migratory Bird Treaty Act of 1918. Not until the mid- to late 20th century did its recovery and recolonization take hold and produce a breeding population that appears to be stable (Schneider et al. 2010). 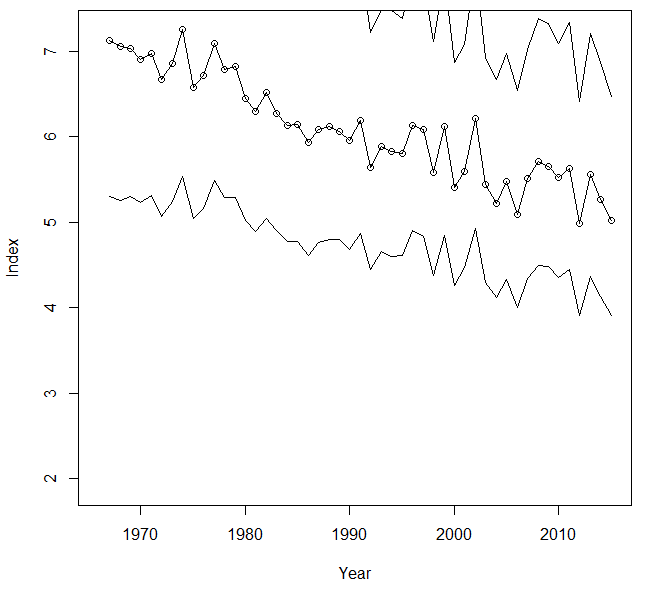 Breeding population trend for the Willet in the Prairie Pothole Region for 1966–2015 based on the federal Breeding Bird Survey (Sauer et al. 2017).

The Willet is not designated under any federal or state risk category. A recent assessment of the status of all shorebirds in the United States designated the Willet as a species of High Concern (U.S. Shorebird Conservation Plan Partnership 2016). Partners in Flight (2017) assigned it a moderately high Continental Concern Score of 14/20. Factors contributing to this high score were the species’ small population size, a declining population trend, and threats to its breeding and wintering habitat. Two states in the Northeast, where shoreland development is increasing, have some level of concern: Maine has designated the Willet a “priority 2 nesting species” in the state’s Wildlife Action Plan, and Connecticut designated it as a species of “Special Concern.” The increased conversion of native lands in North Dakota to cropland and energy development is a concern because the Willet needs large landscapes of “short, sparse grasslands, particularly native grassland, which are important for nesting and foraging” (North Dakota Game and Fish Department 2015).

The availability of suitable habitat may not be the only challenge this large, stocky inconspicuous shorebird has to contend with. A recent analysis by the National Audubon Society classified the Willet as “climate endangered.” Their models predicted that the western subspecies could lose 70% of its current winter habitat by the year 2080; coastal areas in particular may be threatened by rising sea levels and development (Langham et al. 2015; National Audubon Society 2017).