Regular, rare summer resident in counties along the Canadian border; uncommon spring and fall migrant statewide. The Wilson’s Warbler was a rare species during the Minnesota Breeding Bird Atlas (MNBBA).

The Wilson’s Warbler ranges across the northern forests and taiga regions of Canada and Alaska but excludes the tundra and Great Plains regions. There are three subspecies. The subspecies Cardellina pusilla pusilla breeds across the boreal coniferous forest and taiga from Newfoundland and the Maritime provinces westward to the Canadian Mackenzie District, and has small outlying populations in northern New England and the Great Lakes states. The western interior subspecies, C. p. pileolata, breeds from Alaska through interior British Columbia and the Rocky Mountains. The coastal western subspecies, C. p. chryseola, breeds on the Pacific coast from southwestern British Columbia south to southern California. Highest densities of the Wilson’s Warbler occur along the Pacific coast, in British Columbia, and in Newfoundland (Figure 1).

Assigned a Continental Concern Score of 10/20 and designated as a Common Bird in Steep Decline by Partners in Flight.

A short- to medium-distance migrant that winters in Mexico and Central America; some individuals winter in the United States along the Gulf coast in Louisiana and in southern California.

Primarily consumes insects and spiders; forages by gleaning, sallying, and hover gleaning from the ground to the canopy.

An open-cup nest built on or near the ground in a tussock of moss or sedge or base of a shrub, usually from the ground up to 1 m. 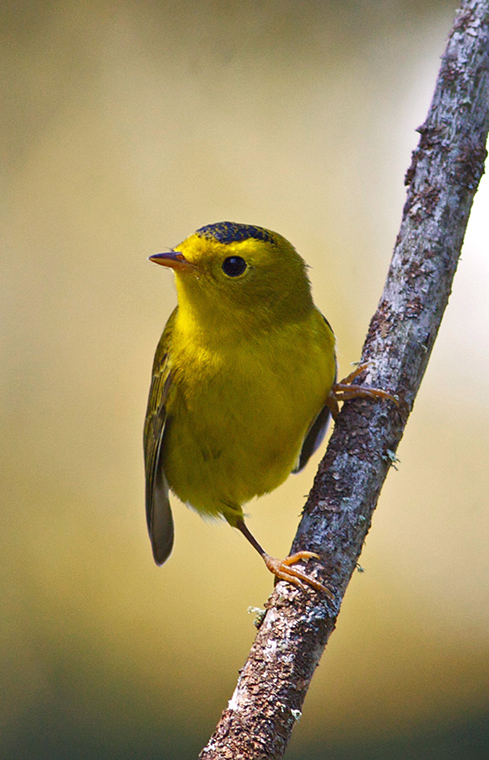 Breeding distribution and relative abundance of the Wilson’s Warbler in North America based on the federal Breeding Bird Survey from 2011 to 2015 (Sauer et al. 2017).

The Wilson’s Warbler is the smallest of the wood warblers in Minnesota (pusilla means small), but it was named after one of the giants of American ornithology, Alexander Wilson. The first record of the Wilson’s Warbler in Minnesota was in 1900, when Roberts and two companions took a trip (June 27 to July 11) to Mud Lake and Thief Lake, Marshall County. Travel was very rough, and the weather was terrible for observation and collecting birds on half the days. Roberts left the expedition on July 11, but his companion Leslie O. Dart stayed longer (Roberts [1858-1946] 1991). In 1900, they observed a couple of Wilson’s Warblers. In 1901, Dart went back to the big marshes in northwestern Marshall County and saw a pair “several times” on the “edge of a spruce and tamarack swamp near Mud Lake” (Roberts 1932). In his classic book The Birds of Minnesota, Roberts concluded that the Wilson’s Warbler was a “spring and fall migrant throughout the state, probably nesting in very limited numbers in the extreme northern part,” although firm evidence of breeding had not been found. Subsequently, further indication of resident Wilson’s Warblers in Marshall County was a checklist of the “Birds of Mud Lake National Wildlife Refuge” (Carlsen and Harris 1955) that designated the Wilson’s Warbler as a “Common migrant. Possibly breeds.”

Because the Wilson’s Warbler is a regular but uncommon migrant that often lingers in the spring as late as mid-June and can arrive in the fall by the end of July, most summer single observations cannot be used as an indicator of residency. Although the safe dates assigned to the species by the MNBBA were June 1 to August 8, in retrospect more accurate dates might be June 15 to July 20. If the later dates June 15 to July 20 are used, the seasonal reports compiled by the Minnesota Ornithologists’ Union (MOU) do not include any summer resident observations until 1975, when 1 was published: Itasca State Park, Hubbard County on July 13 (Fall 1977).  However, a Wilson’s Warbler was heard on June 16, 2007 (J. C. Green, personal files) in the same place it was detected 20 years earlier along Blesner Creek, adjacent to County Highway 7, Cook County (Eckert 1976).  Unfortunately, the year for this record was erroneously published in the MOU’s seasonal report as 2006.

Then in 1980, the first evidence of confirmed nesting for the state was recorded on June 29 in a small colony along Hog Creek in Lake County (Wilson 1980). From the mid-1970s to the years of the MNBBA, there were almost yearly observations, during midsummer, in appropriate habitat landscapes primarily in Cook, Lake, and St. Louis Counties; a few observations were in Clearwater, Pennington, and Lake of the Woods Counties. After the federal Breeding Bird Survey (BBS) routes were established in 1967, 1 to 4 birds were reported in seven years from 1980 to 1992 on northern routes. When new routes were created in 1993, especially several in swampy/brushy habitat in the north (i.e., the Jordan, Lude, and Red Lake BBS routes), from 4 to 10 birds were reported yearly from 1993 to 2015. It is not known if this increase was due to better sampling in appropriate habitat, or was an actual increase in the Wilson’s Warbler population.

The MNBBA participants reported 82 records of the Wilson’s Warbler. The survey work done for the MNBBA, plus other project surveys in northern Minnesota during the atlas years, increased the knowledge of the distribution of the Wilson’s Warbler significantly. The species was recorded from 1.2% (57 of 4,734) of the surveyed blocks and 1.2% (29 of 2,337) of the priority blocks (Figure 2; Table 1). Previously, there was only 1 state confirmed breeding observation, but the MNBBA produced 2 confirmed records (feeding just fledged young) and 12 probable records. There was a strong cluster of records in the peatlands and shrublands of the Agassiz Lowlands Subsection south of Lake of the Woods, mostly due to targeted field surveys. The other area that produced most of the records was the 3 northeastern counties: Cook, Lake, and north and central St. Louis. Additional possible breeding evidence was recorded from several other northern counties, including Itasca, Koochiching, and Roseau. Because this warbler is a very late spring migrant (through mid-June), it is difficult to tell if these birds were residents or migrants.

The Wilson’s Warbler was considered to be the rarest breeding warbler in Minnesota. However, based on the number of records from the MNBBA, there are nine warblers that are less common than the Wilson’s Warbler. The species appears to have a sustained population along the northern border from Cook County west to Lake of the Woods County. 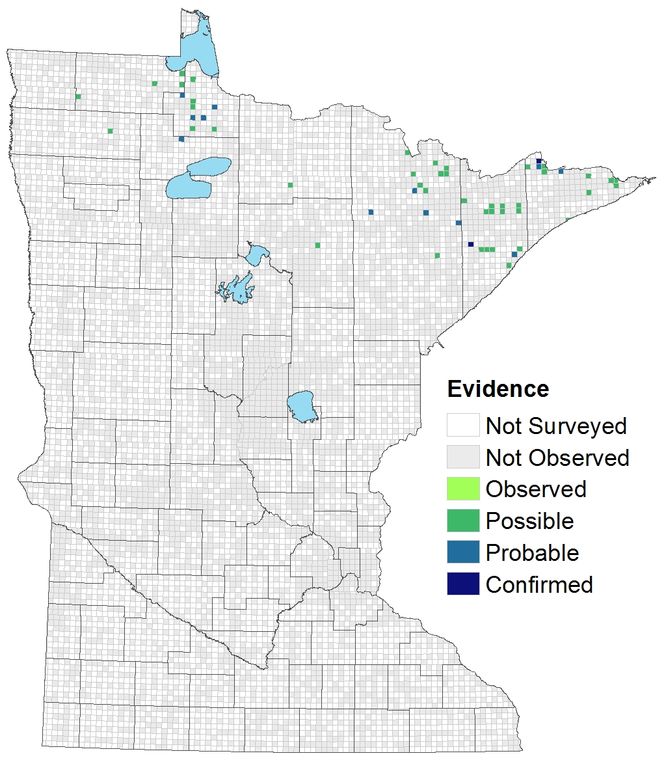 Breeding distribution of the Wilson's Warbler in Minnesota based on the Breeding Bird Atlas (2009 – 2013).

Summary statistics of observations by breeding status category for the Wilson's Warbler in Minnesota based on all blocks (each 5 km x 5 km) surveyed during the Breeding Bird Atlas (2009-2013).

Summary statistics for the Wilson's Warbler observations by breeding status category for all blocks and priority blocks (each 5 km x 5 km) surveyed during the Minnesota Breeding Bird Atlas (2009-2013).

Across its wide range, Wilson’s Warbler breeds in a variety of landscape conditions but always in dense ground cover in wet, shrubby habitat along streams, lakes, beaver ponds, bogs, and regenerating openings in forests (Ammon and Gilbert 1999). The dense shrubbery can be deciduous thickets of willow, alder, and other understory shrubs, or stunted confers in bogs with thick ericaceous species. In Minnesota, breeding birds were found in peatland landscapes, both in the northwest and northeast. In Cook County, just south of the Canadian border, breeding birds were also found in large, regenerating burns along the Gunflint Trail (e.g., the Ham Lake and Cavity Fire areas). Figure 4 is a picture from the 2011 Pagami River Fire that included a small patch of shrubby-wetland where the Wilson’s Warbler was found on two successive years  by different observers (E. Zlonis, pers. comm.). 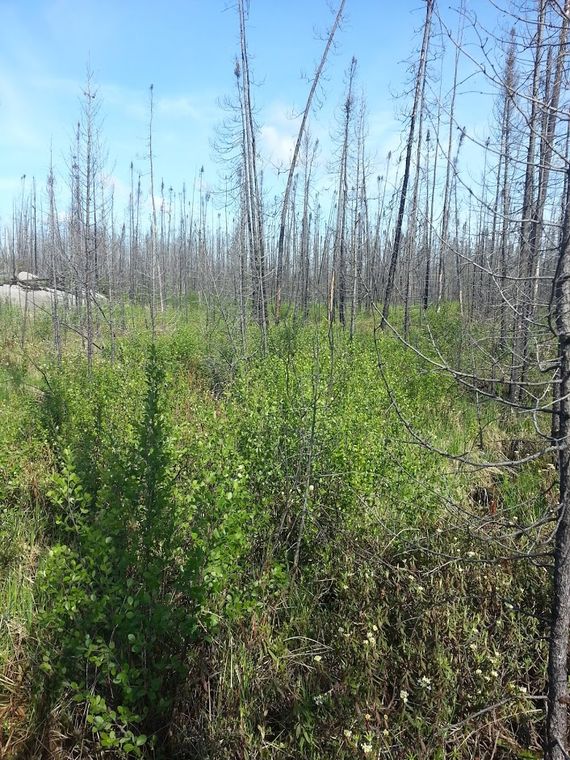 Breeding habitat where the Wilson’s Warbler was observed in a shrubby regenerating area of the Pagami River burn area in northeastern Minnesota (© Edmund J. Zlonis). 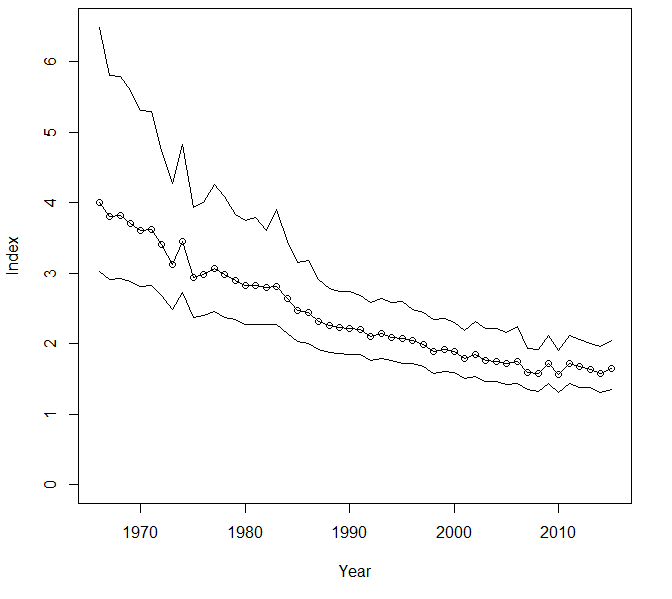 Breeding population trend for the Wilson’s Warbler survey-wide for 1966–2015 based on the federal Breeding Bird Survey (Sauer et al 2017).

Breeding population trend map for the Wilson’s Warbler for 1966–2015 based on the federal Breeding Bird Survey (Sauer et al 2017).

Partners in Flight assigned the Wilson’s Warbler a moderate Continental Concern Score of 10/20 and designated it as a Common Bird in Steep Decline (Rosenberg et al. 2016). The Wilson’s Warbler has no federal listing, but it is a conservation priority in several western states because of recent declining trends (Ammon and Gilbert 1999).

Recent research has shed some light on a possible reason for the substantial decline in the subspecies C. p. chryseola, which breeds along the Pacific coast. Using genetic markers from feathers in the three breeding subspecies to map their wintering ranges, this research showed that each subspecies has a distinct wintering area (McBride 2016). It also found that the Pacific coast subspecies winters primarily at the southern end of the Baja Peninsula in Mexico, an area that has undergone much land-use change from natural habitat to luxury resort and residential development (https://birdsnews.com/2013/1276). More research on the life-cycle connectivity between breeding, migration, and wintering areas for different subspecies is needed to understand causes of recent declines in other populations.