A regular breeding resident, migrant, and accidental in winter. The Yellow-rumped Warbler was common during the Minnesota Breeding Bird Atlas (MNBBA).

Short- to medium-distance migrant that over-winters in the southern United States, along the Atlantic, Gulf, and Pacific coasts, the Caribbean, Mexico, and Central America.

Cup-nest on a horizontal branch in coniferous trees and at highly variable heights. 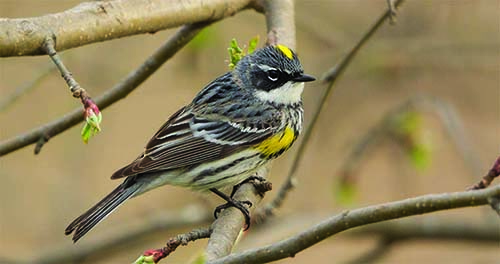 Breeding distribution and relative abundance of the Yellow-rumped Warbler in North America based on the federal Breeding Bird Survey from 2011 to 2015 (Sauer et al. 2017).

Roberts (1932) stated the Yellow-rumped Warbler distribution was primarily north of Minnesota but that it was detected in the evergreen forests as far south as Cass Lake and west to eastern Marshall County. He found it “not generally common as a breeding bird.” He reported very limited nesting activity, occurring primarily in regions of the state where he or many of his observers were located, including Itasca Park or in Marshall and St. Louis Counties. All of these observations were made of fledged young, young with adults, or feeding young out of the nest. One was even labeled “female with egg about ready to be laid,” presumably of a bird that was collected.

The Minnesota Biological Survey (MBS) has recorded 650 breeding season locations, many of which were found in the northeastern and north-central counties previously mentioned (Minnesota Department of Natural Resources 2016). MBS had breeding observation locations from northwestern Minnesota in Marshall and Roseau Counties, west to eastern Becker County and south to northern Mille Lacs, Pine, northeastern Todd, and eastern Wadena Counties.

The MNBBA reported 1,970 records of the Yellow-rumped Warbler, which were primarily distributed in the Laurentian Mixed Forest Ecological Province but included many records in the Tallgrass Aspen Parklands Ecological Province and in the Hardwood Hills Ecological Subsection (Figure 2). Confirmed nesting records beyond those previously reported included Becker, Crow Wing, Koochiching, Lake of the Woods, Pine, and Roseau Counties (Koochiching and Roseau Counties previously had inferred nesting by Green and Janssen [1975]). Probable nesting was also identified in Cass, central Otter Tail, and eastern Pennington Counties. The MNBBA included breeding observations for 964 blocks (Figure 3; Table 1). As with many other secretive nesting species, only 6.7% (65/964) of all recorded blocks of this species had confirmed nesting activity, with the vast majority in Cook, Lake, and St. Louis Counties.

The data from both the MBS and MNBBA expanded the potential breeding distribution to the west, southwest, and south in Minnesota from that reported by Roberts and subsequent compilers through 1997. In their review of the Yellow-rumped Warbler in North America, Hunt and Flaspohler (1998) reported southward range expansions in New York, Pennsylvania, and West Virginia when reforestation and the creation of pine plantations had occurred. Cutright et al. (2006) noticed “islands of habitat” in Wisconsin for this species that were significantly farther east than earlier references in their 1995–2000 breeding bird atlas. Confirmed nesting activity was extensive in the coniferous and mixed-coniferous forest in the northern counties of Wisconsin and extended south to Door, Green Lake, Marquette, and St. Croix Counties, even to Sauk County in south-central Wisconsin.

It is impossible to know whether Yellow-rumped Warbler breeding activity had been missed by Roberts and others during earlier times in Minnesota, such as in the fringes of its current breeding range in the northwest, western, or north-central regions where both the MBS and MNBBA observed this species. Alternatively, do these represent recent breeding range expansions in Minnesota? The Yellow-rumped Warbler is moderately difficult to identify by song but relatively easy to identify by sight. Given that coniferous trees and forests have contracted to the north with logging and forest clearing, an expansion south is counterintuitive. Observers in Minnesota should look for this species in more southern localities of Minnesota. This is especially true where substantial patches of coniferous trees or pine plantations occur. 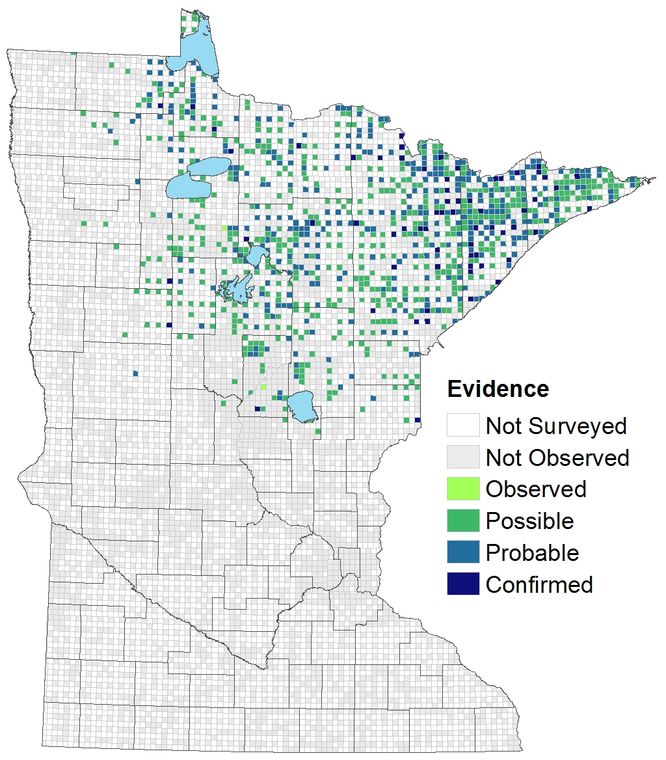 Breeding distribution of the Yellow-rumped Warbler in Minnesota based on the Breeding Bird Atlas (2009 – 2013).

Summary statistics of observations by breeding status category for the Yellow-rumped Warbler in Minnesota based on all blocks (each 5 km x 5 km) surveyed during the Breeding Bird Atlas (2009-2013).

Summary statistics for the Yellow-rumped Warbler observations by breeding status category for all blocks and priority blocks (each 5 km x 5 km) surveyed during the Minnesota Breeding Bird Atlas (2009-2013).

Yellow-rumped Warblers are considered a habitat generalist and found in many types of coniferous forest: mixed coniferous-deciduous forests, deciduous forests with scattered coniferous trees, and even in young forests (Collins et al. 1982; Hunt and Flaspohler 1998; Cutright et al. 2006). Habitat data compiled during the National Forest Bird (NFB) Monitoring Program in the Chippewa and Superior National Forests (Niemi et al. 2016) documented its use of many habitat types, but the species was most abundant in mature black spruce-tamarack lowlands (Figure 4). Other forest cover types used in these national forests were jack, red, and white pine; regenerating conifer; and mixed swamp conifer. Yellow-rumped Warblers were one of the most abundant and ubiquitous species in the Agassiz Lowlands Ecological Subsection in northwest Minnesota, where it occurred in every forest habitat type sampled, but again it was most abundant in mature black spruce-tamarack stands (Niemi and Hanowski 1992; Bednar et al. 2016).

During the MNBBA point counts, Yellow-rumped Warblers were found in conifer-dominated habitat types and most frequently in bogs, pine forests, and in both upland and lowland coniferous forests (Figure 5). 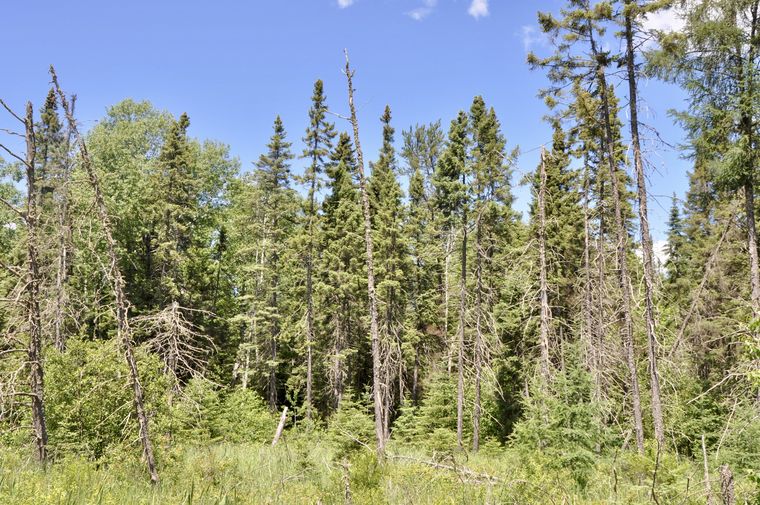 Habitat profile for the Yellow-rumped Warbler based on habitats within 200 m of point counts where the species was present during the Minnesota Breeding Bird Atlas (2009-2013).

Partners in Flight (Rosenberg et al. 2016) estimated a global North American breeding population of 150 million breeding adults, which makes the Yellow-rumped Warbler the most abundant warbler species in North America by far. Previously, Partners in Flight (Partners in Flight Science Committee 2013) had estimated 200,000 breeding adults in Minnesota. During the MNBBA, a substantially higher breeding population in Minnesota of 2.65 million breeding adults was estimated (95% confidence interval was 2.34 – 3.75 million). Like many species that occur in the northern portions of Minnesota, especially in the Boundary Waters Canoe Area Wilderness and the Red Lake Peatland, which are not well sampled by the federal Breeding Bird Survey (BBS), large discrepancies exist between the two methods. Because the MNBBA sampled these remote, roadless areas, it likely obtained a better population estimate for the state.

The BBS population trend estimate for the Yellow-rumped Warbler in Minnesota was significant, with a 1.78% per year increase from 1967 to 2015 (Figure 6). Similar increases were observed in Michigan (1.48% per year) and in Wisconsin (1.93%) over the same time period. In contrast, population trends were stable in Ontario, the United States, Canada, and survey-wide. Partners in Flight (Rosenberg et al. 2016) estimated a stable population, with no increase in the population from 1970 to 2014. 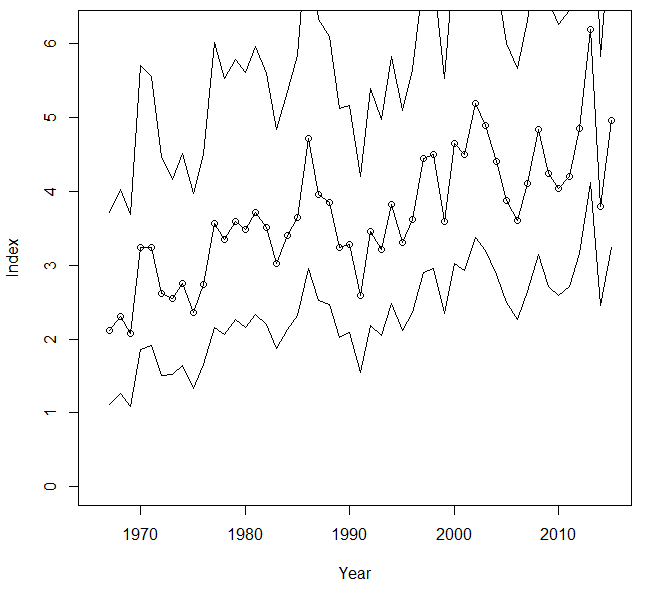 Breeding population trend for the Yellow-rumped Warbler in Minnesota for 1967–2015 based on the federal Breeding Bird Survey (Sauer et al. 2017). 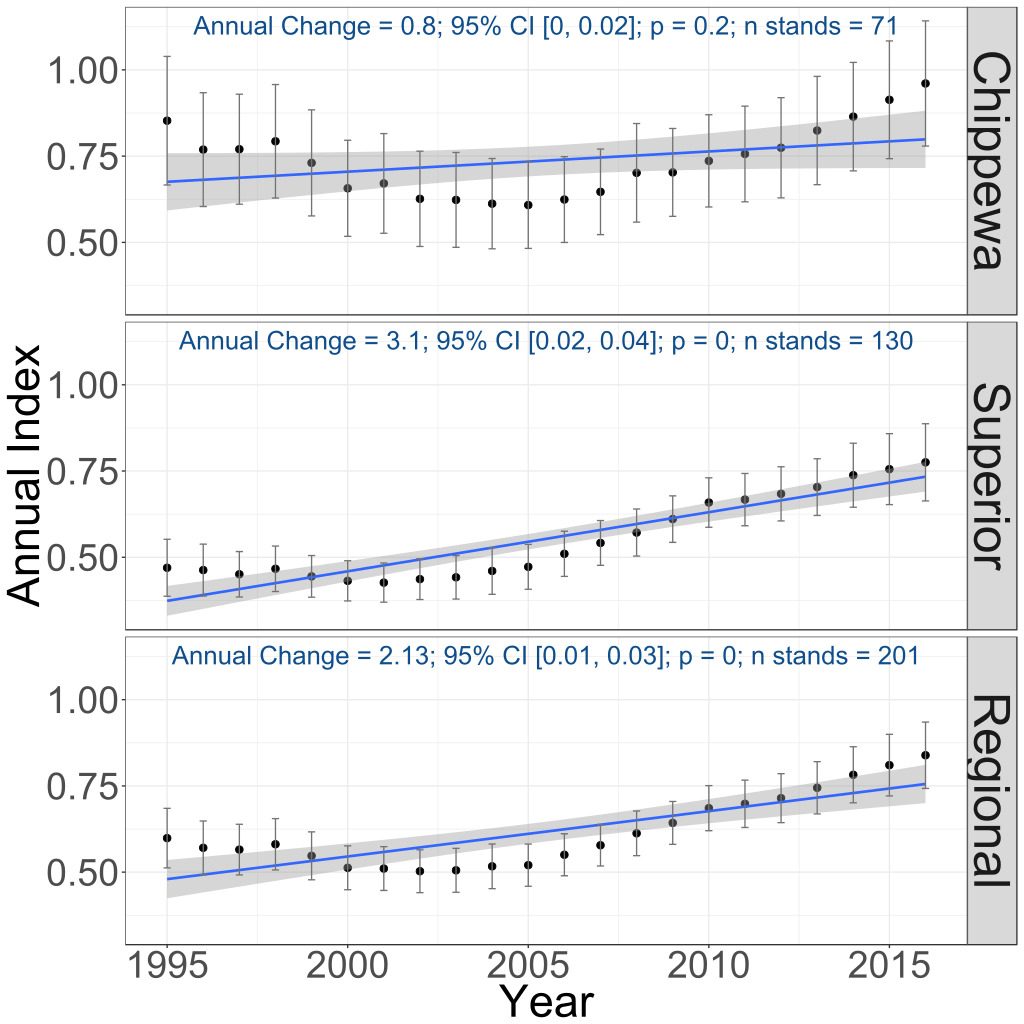 Breeding population trends of the Yellow-rumped Warbler in the Chippewa and Superior National Forests and the combined regional trend, 1995–2016 (Bednar et al. 2016).

The Yellow-rumped Warbler had a relatively low Continental Concern Score in North America of 6/20 and is of little concern at present (Rosenberg et al. 2016). This is primarily due to its substantial and stable population, plus its wide distribution in North America. As pointed out by Hunt and Flaspohler (1998), any forest management directed toward other coniferous forest species would also benefit this species.

Longcore et al. (2013) identified the Yellow-rumped Warbler as one of the most frequently killed species at communication towers, where it was ranked fourth among all species in the Southeastern Coastal Plain and fifth in the Eastern Tallgrass Prairie. In its review of 588 bird species in North America susceptible to climate change, Langham et al. (2015) and the National Audubon Society (2015) did not list this warbler among species of concern.

Overall, the status of the Yellow-rumped Warbler in Minnesota appears to be stable as long as suitable coniferous forest habitat is sustained.