A summer visitant that occasionally breeds in the state; a regular migrant, mostly during the spring and rare during the fall. The American Avocet was very rare during the Minnesota Breeding Bird Atlas (MNBBA).

The avocet’s breeding range is centered in the Great Basin and Great Plains and other areas of the arid west where shallow alkaline wetlands, potholes, mudflats, and saline lakes are found. It also breeds locally along the California coast, in the Central Valley, and in other inland basins from Washington to Utah and south through the Great Plains to the Texas Panhandle. Another breeding population in Texas occurs along the Gulf Coast. The northern part of the avocet’s range includes the Canadian provinces of Alberta, Saskatchewan, and Manitoba. The eastern margin of its range includes persistent breeding populations in North Dakota (Drilling 2015) and South Dakota (Tallman 2001) and sporadic nesting in western Minnesota. It appears to be just a rare migrant in Iowa (Kent and Dinsmore 1996). Some of its highest breeding densities are found in northern Utah (Figure 1). Historically in the 1800s, avocets were known to nest along the Atlantic Coast as far north as New Jersey, but commercial plume hunting apparently caused the extirpation of this breeding population by 1900 (Ackerman et al. 2013).

The U.S. Shorebird Conservation Plan ranks the American Avocet as a species of Moderate Concern; Partners in Flight assigned it a Continental Concern Score of 11/20.

A medium-distance migrant that winters along both coasts of the United States, from Texas to the Carolinas in the east and in California in the west. Further south it can be found along the coasts of Mexico as well as inland.

A scrape on the ground lined with vegetation or pebbles, or completely unlined. 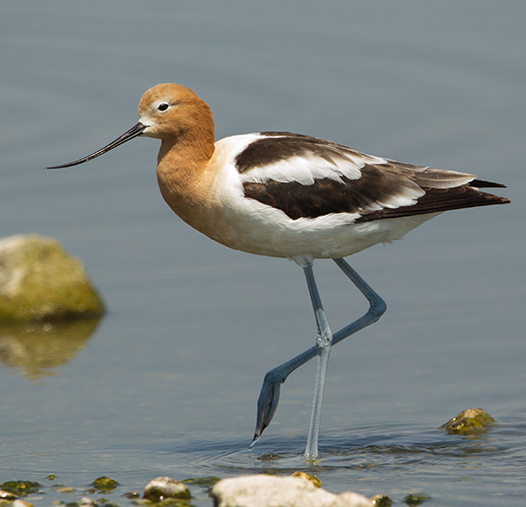 Breeding distribution and relative abundance of the American Avocet in North America based on the federal Breeding Bird Survey, 2011–2015 (Sauer et al. 2017).

In 1932 Roberts wrote, “Although still a common bird in western North Dakota, the Avocet has long been extinct in Minnesota and comparatively little is on record in regard to its former presence in the state. . . . There is reason, however, to believe that during the early years of the settlement of the state it was a summer resident and nested on the prairies of the west.” However, it could not have been very common, “as the early explorers . . . make no mention of it.” Roberts continues by citing records from the Dakotas and an anecdotal record from Jackson County. He also quotes Dr. Abbott, one of his correspondents, who claimed “he shot, in 1892, the only avocet he ever saw” near Faribault, Rice County. When Roberts began to study birds, he took a two-week trip to the prairie in Grant and Traverse Counties in June 1879, commenting that he “saw nothing of the Avocet.” The only other record from the nineteenth century is of birds collected near Brown’s Valley in Traverse County between June 21 and July 8, 1887 (Roberts 1932).

Fortunately, Roberts’s prediction did not come to pass. The first twentieth century observation, a sighting in Murray County in 1934, was published in the second edition (1936) of The Birds of Minnesota. Other early records include single observations in August 1937 from Lincoln and Big Stone Counties (Rysgaard 1937). Surprisingly the next record was from May 21, 1944, of a bird feeding in the surf on Minnesota Point, Duluth (Lakela 1944). When bird watching on the western Minnesota prairie became more common in the 1950s, the avocet was considered a regular migrant and irregular summer resident (Janssen 1987). The first nesting record was in Lyon County in 1956 (Southwick 1956). Subsequent detections include 23 records with breeding evidence from 1959 to 1993. All these records came from 11 counties near the prairie margin with the Dakotas and ranged geographically from Marshall to Lyon Counties, with outliers in Todd and Faribault Counties. These are well mapped and referenced by Peder Svingen in his 1998 review article, “The American Avocet in Minnesota.”

After Svingen’s article was published, seven more records with evidence of breeding were documented: Big Stone County (1999, 2000, 2003, 2005; all in seasonal reports in The Loon); Traverse County (Marengo 2000); Hamden Slough, Becker County (Wiens 2003), and Marshall County (Wiens 2004). Most of the breeding records and summer records in the twenty-first century were centered in Traverse, Big Stone (Toque Township), and Lac qui Parle Counties. Considering how scattered and irregular these breeding records are and the lack of bird-watchers in the early decades of the nineteenth century, it is not improbable that the avocet has always been nesting in Minnesota, present in the state as outliers from the more substantial breeding populations in North and South Dakota.

After 1950, the American Avocet was classified as a regular species in Minnesota. Most records, including hundreds documented throughout the twentieth century, were limited to the migration seasons (Janssen 1987). Two-thirds of the observations are in the spring; far fewer observations are in the fall, as would be expected for a species that does not nest north of Minnesota. At least half of the migration records were in counties near the borders of North and South Dakota. All but 18 of the 87 Minnesota counties have one or more records of the American Avocet, as displayed on the map in Svingen (1998), and a couple more counties have been added in recent years. Eighteen records from 1934 to 2014 are from the city of Duluth, a migration hot spot, as well as cities along the Iron Range in St. Louis County. If there are bird-watchers and open habitat in rural areas, it seems that this well-known vagrant will be spotted at some point in time.

During the MNBBA, participants reported four American Avocet records from four atlas blocks (one “confirmed,” one “probable,” and two “observed”). All four records were in Big Stone County (Figure 2). This distribution is a small echo of the breeding distribution described above. Because bird observations in recent years have focused more on identifying county sightings and not on delineating breeding context, it is difficult to judge if the range of the avocet delineated by the MNBBA is indeed more confined than in earlier years, having contracted to just a few managed wildlife areas and their adjacent surroundings. 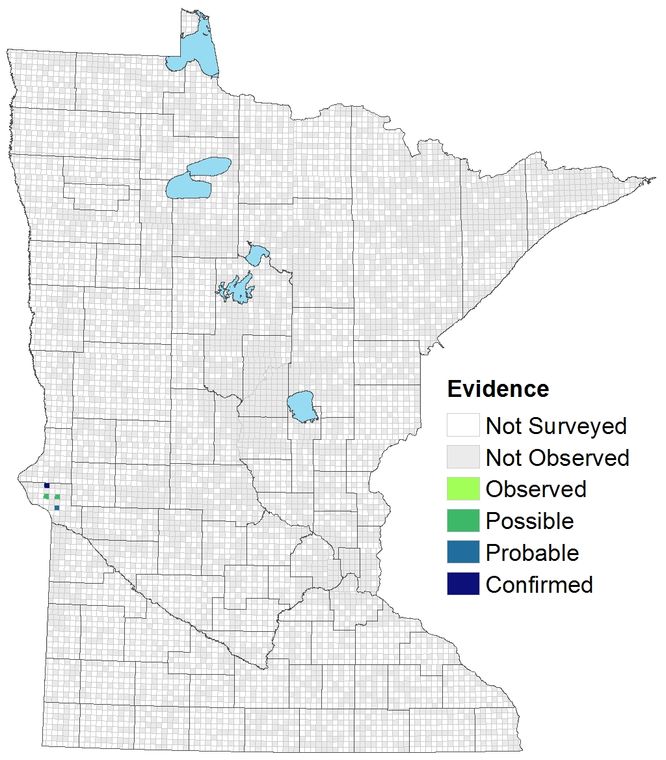 Breeding distribution of the American Avocet in Minnesota based on the Breeding Bird Atlas (2009 – 2013).

Summary statistics for the American Avocet observations by breeding status category for all blocks and priority blocks (each 5 km x 5 km) surveyed during the Minnesota Breeding Bird Atlas (2009-2013).

In North Dakota, breeding pairs are “largely restricted to ponds and lakes with exposed, sparsely vegetated shoreline or mud flats that are adjacent to expanses of shallow water. These conditions occur naturally on alkali ponds and lakes and on subsaline, semi-permanent ponds and lakes. During low-water conditions, exposed shorelines or mud flats are created in other types of wetlands by certain types of land-use practices, particularly overgrazing and tillage” (Stewart 1975). In Minnesota, the nesting site has seldom been described; sites mentioned included sewage treatment lagoons, impoundments, islands in a marsh, and bare edges of sloughs or lakes, most notably at Salt Lake in Lac qui Parle County.

Using data from the federal Breeding Bird Survey, the population trend for this species is relatively stable survey-wide, with a non-significant average annual decrease of 0.31% per year from 1966 to 2015. During the most recent 10-year reporting period of 2005–2015, the trend increased an average of 3.25% per year (Figure 3). A similar population trend has been documented in the Prairie Pothole Region of the northern Great Plains (Sauer et al. 2017). 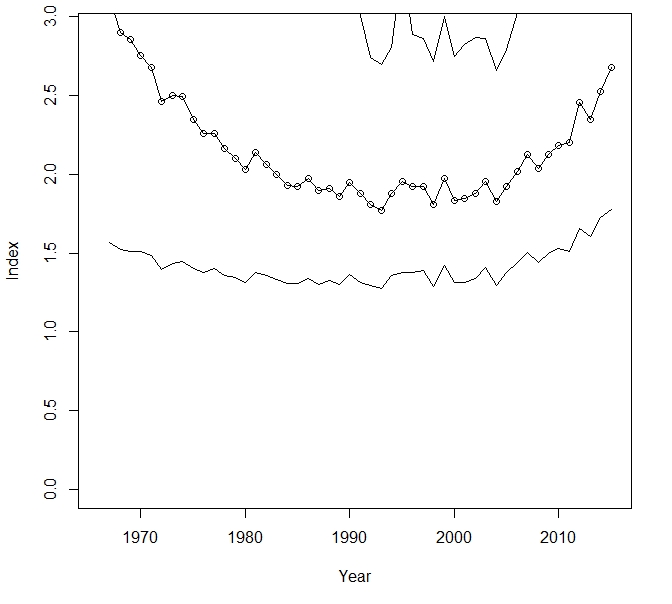 Breeding population trend for the American Avocet in North America for 1966–2015 based on the federal Breeding Bird Survey (Sauer et al. 2017).

The primary threat to the American Avocet is the loss of habitat on its breeding and wintering grounds due to habitat destruction and wetland drainage. Pesticides and other toxics are a concern because both selenium and methylmercury can be high in the species’ preferred habitats; in some circumstances the viability of eggs and the survival of chicks can be impacted by the high bioaccumulation levels of these substances (Ackerman et al. 2013).

Although the species is ranked as a Moderate Concern nationally by the U.S. Shorebird Conservation Plan Partnership (2016), it is listed as a Species of High Concern in the Prairie Pothole Region (Beyersbergen et al. 2004). Partners in Flight (2017) gave the species a Continental Concern Score of 11/20. This moderate score was influenced largely by the species’ relatively small population size and by the threats to its breeding and wintering habitats. As a species dependent on wetlands in the Great Plains, warming temperatures are a major concern. An analysis by the National Audubon Society classified the American Avocet as a “climate endangered” species. This work predicted that the species could experience a 96% loss of its breeding habitat by 2080 (Langham et al. 2015; National Audubon Society 2017). The future of this strikingly beautiful, long-legged wading bird is clearly in jeopardy.