A regular breeding resident, migrant, and regular in winter; the American Kestrel was common during the Minnesota Breeding Bird Atlas (MNBBA).

The American Kestrel’s breeding range is widely distributed throughout North America, including from Alaska to New Brunswick, virtually all of the United States except southern Florida and along the Gulf coast. American Kestrels nest throughout much of Central and South America. Seventeen subspecies are recognized, ranging from Alaska to Tierra del Fuego, Argentina. The species is locally absent from areas that lack suitable nest sites. Patches of high density are scattered throughout the midwestern and western United States (Figure 1).

A short-distance to long-distance migrant, the species overwinters from the midwestern United States to Central and South America.

Primarily a sit-and-wait predator on arthropods and small vertebrates, such as small mammal, birds, reptiles, and amphibians. The species will also hover while searching for prey.

An obligate, secondary cavity nester that relies on woodpecker-excavated or natural cavities, and on nest boxes. 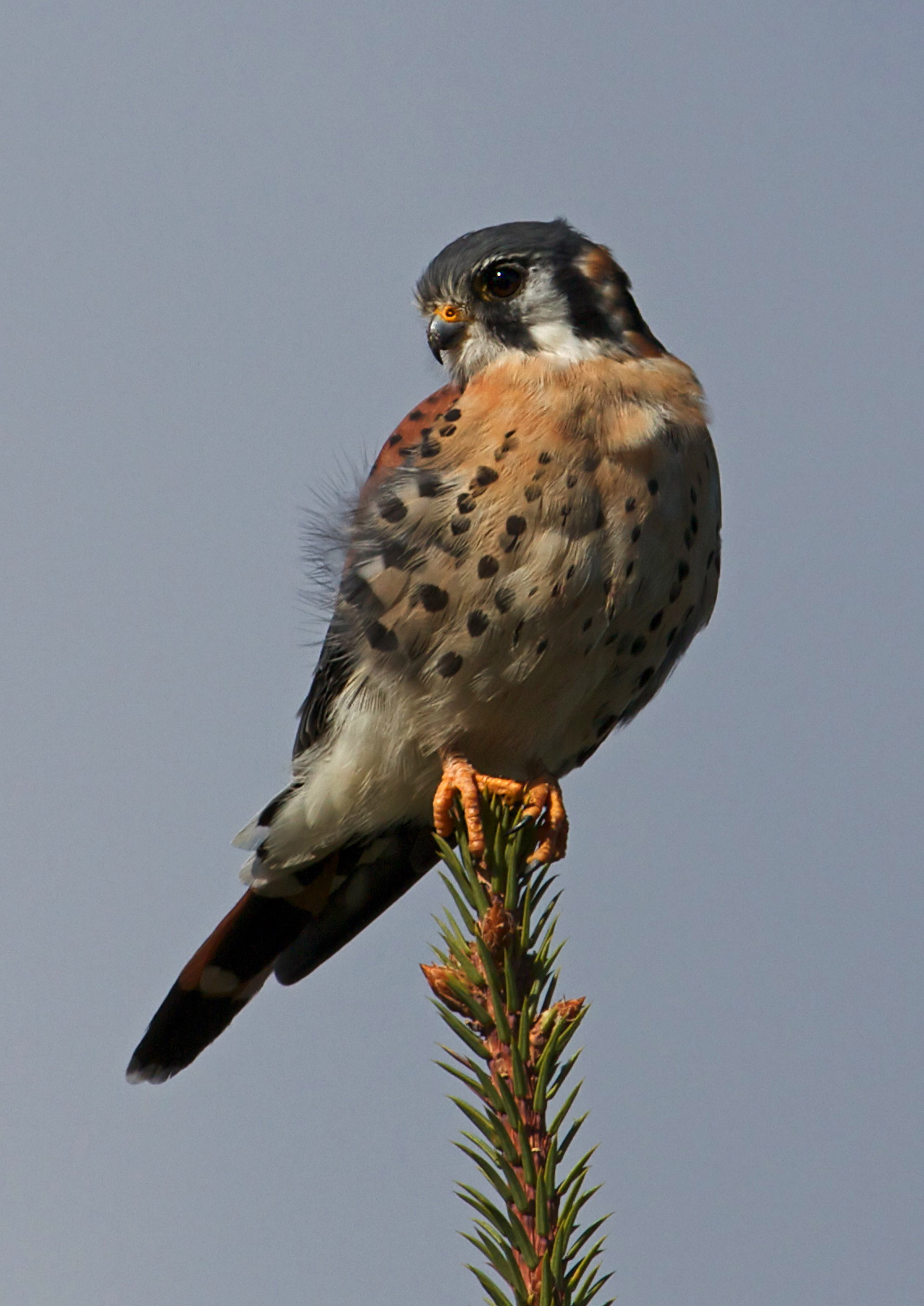 Breeding distribution and relative abundance of the American Kestrel in North America based on the federal Breeding Bird Survey, 2011–2015 (Sauer et al. 2017).

Roberts said it was “breeding throughout the state; rather infrequent in the prairie groves, most numerous northeastward.” He added, “Fifty years ago the Sparrow Hawk was an abundant summer bird throughout Minnesota. . . . In recent years it has disappeared to a considerable extent in the more thickly settled portion of the state.” He speculated that the considerable expansion of logging activity and more frequent forest fires had allowed American Kestrel populations to expand into the central and northeastern regions of the state.

Roberts (1932) describes nesting activity from Minneapolis and Cass Lake and from the widely distributed counties of Becker, Carlton, Lake of the Woods, Polk, and St. Louis. Nesting activity included a wide variety of behaviors, from nests with eggs to adults feeding downy young.

Decades later, Green and Janssen (1975) described the kestrel as “one of the most numerous breeding hawks” but “least numerous in the heavily wooded portions of the state.” They added that fire protection had reduced the availability of the burned-over areas that the species prefers in these forested regions. Johnson (1982) completed one of the first reviews of nesting of the American Kestrel in Minnesota. He documented positive nesting from 1960 to 1981 in 29 counties, ranging from Winona County in the southeast, west to Lac qui Parle County, northwest to Pennington County, and northeast to Cook County. Johnson also provided evidence on the importance of suitable nest sites for the kestrel. He placed 14 nest boxes prior to the 1981 field season in eastern Becker and southern Hubbard Counties and achieved 100% occupancy the first year of placement; 9 were placed in suitable habitat, and 5 were placed in previously occupied territories.

The Minnesota Biological Survey has recorded 279 breeding season locations of the American Kestrel during county surveys in the state (Minnesota Department of Natural Resources 2017). The locations were widely distributed statewide but were especially numerous in the southwest, the southern tier of counties, Clay County, Clearwater County, and central St. Louis County.

The MNBBA illustrated the extensive distribution of the American Kestrel in Minnesota and established it as the most abundant falcon, with 1,782 records (Figure 2). The number of MNBBA records also placed it as the third most abundant raptor behind the Red-tailed Hawk and the Bald Eagle. Reported from every county in the state, the species was recorded in 28.0% (1,352/4,831) of all blocks covered and in 36.4% (851/2,337) of the priority blocks (Figure 3; Table 1). Confirmed nesting was reported in 57 counties. The only counties without confirmed or probable nesting were Becker, Houston, Hubbard, and Watonwan, but all 4 had possible nesting activity. Ironically, Becker and Hubbard were the 2 counties where Johnson (1982) had his high success rate of nest box use. The MNBBA fills in many of the gaps in the breeding distribution previously described by Johnson (1982), Janssen (1987), and Hertzel and Janssen (1998).

The predicted distribution map based on point counts gathered during the MNBBA identified lands with highest suitability to be the open areas of southern and western Minnesota (Figure 4). Low landcover suitability was predicted for northeastern and southeastern forested areas and the Twin Cities metropolitan area.

In their review of the American Kestrel in North America, Smallwood and Bird (2002) emphasized that the species had increased greatly during the 18th and 19th centuries in eastern North America with widespread deforestation and “horse-powered” agriculture. Both provided open areas for foraging as long as suitable nesting sites were available. Subsequently, urban and suburban areas as well as reforestation rendered many locations again unsuitable for kestrels. Smallwood and Bird also suggest that suitable nest sites, available prey, and perch sites in open country may be limiting factors for the species.

In Minnesota, Roberts (1932, 1936) provided little insight into the reasons, besides human settlements, for the American Kestrel being “now much reduced in numbers.” He thought that logged and burned-over areas provided excellent habitat for the species. The use of logged areas was partly supported by Robbins (1991) in Wisconsin, but he also cited Kumlien and Hollister (1903), who stated that if the larger trees were removed, then kestrel numbers were diminished. Chartier et al. (2013) in Michigan stated that prior to European settlement, kestrels were uncommon in the heavily forested areas and probably restricted to occasional openings and edges.

In Minnesota, it seems likely that the American Kestrel was historically common or even locally abundant in open areas that had suitable nest sites in trees, hunting perches, and available prey. These situations likely existed in many areas of the state, except the open prairies and grasslands and densely forested areas that lacked edges or openings. Intensive agriculture, settlement, and logging that reduced the availability of important nesting and foraging opportunities resulted in declining populations. These activities appeared to be especially prevalent beginning in the early 1900s, leading to the species’ decline that Roberts lamented. 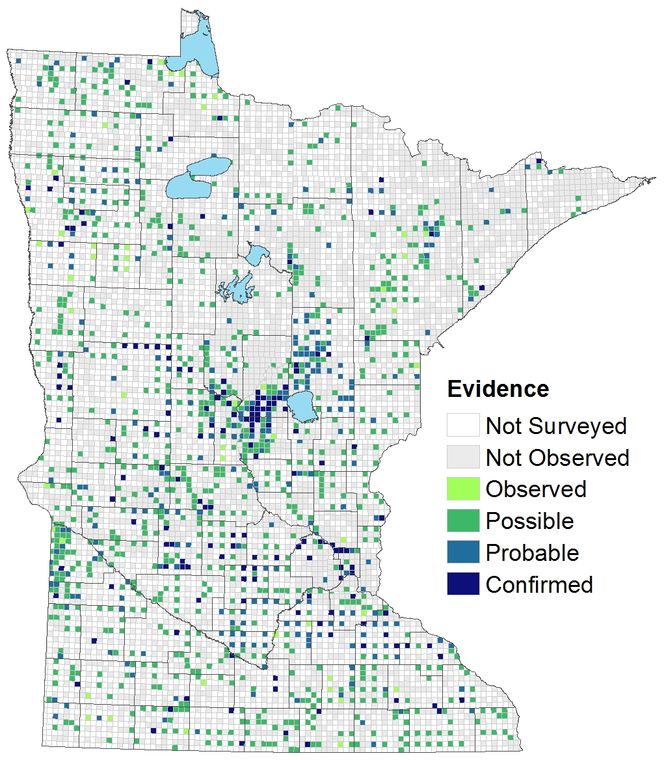 Breeding distribution of the American Kestrel in Minnesota based on the Breeding Bird Atlas (2009 – 2013).

Summary statistics of observations by breeding status category for the American Kestrel in Minnesota based on all blocks (each 5 km x 5 km) surveyed during the Breeding Bird Atlas (2009-2013).

Summary statistics for the American Kestrel observations by breeding status category for all blocks and priority blocks (each 5 km x 5 km) surveyed during the Minnesota Breeding Bird Atlas (2009-2013). 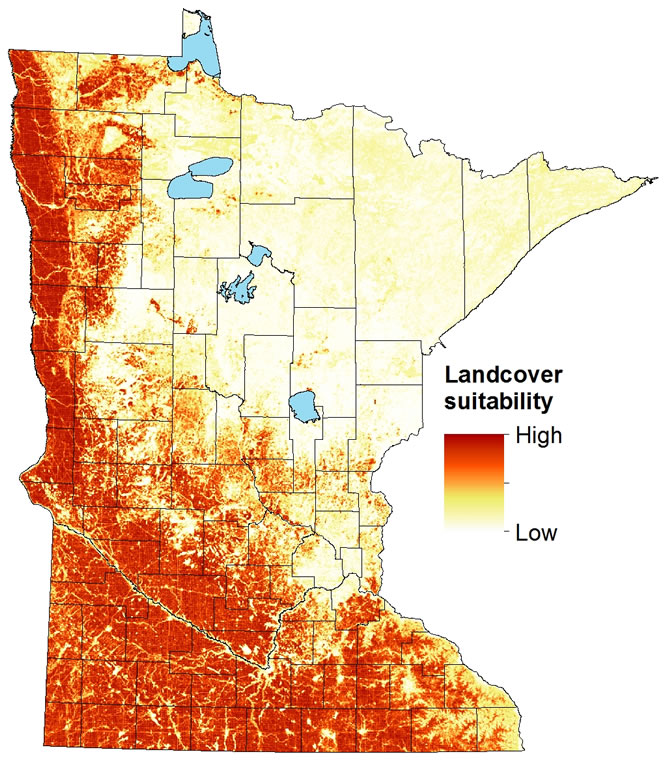 Landcover suitability of the American Kestrel in Minnesota based on habitat, landscape context, and climate data gathered during the Minnesota Breeding Bird Atlas (2009-2013) using the MaxEnt modeling approach.

In Minnesota, American Kestrels prefer open and partly open country with scattered trees, agricultural lands, some open urban areas, and recently logged or burned-over forests (Niemi and Hanowski 1992). The combination of suitable habitat, nest sites, and perch sites is essential for successful nesting (Figure 5). Smallwood and Bird (2002) suggested that nest sites be surrounded by greater than 20 ha of “open patches covered with ground vegetation with adequate hunting perches nearby.” In logged areas in Minnesota, the kestrel tends to be on relatively small sites (i.e., 10–20 ha), which suggests that larger landscapes are not essential, but productivity data in these areas are lacking (Niemi and Hanowski 1984). Available nest sites in larger trees within recently logged areas are essential. 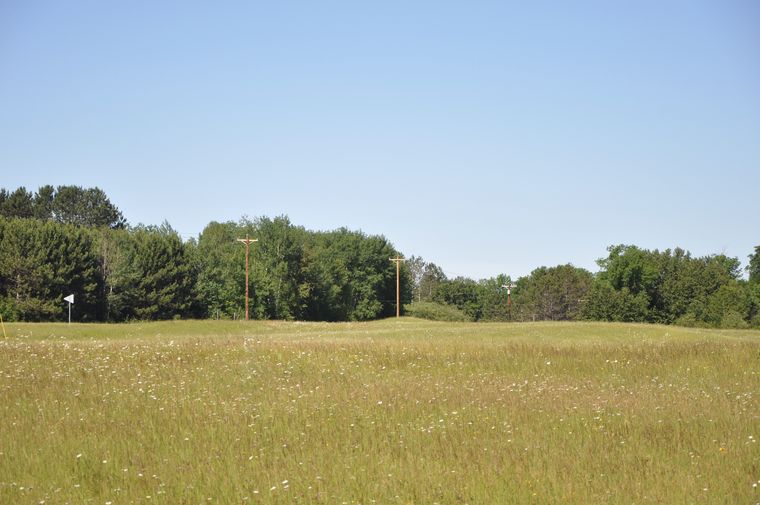 Habitat profile for the American Kestrel based on habitats within 200 m of point counts where the species was present during the Minnesota Breeding Bird Atlas (2009-2013).

Population trends for American Kestrels based on the federal Breeding Bird Survey (BBS) in Minnesota detected a significant decline of −2.68% per year from 1967 to 2015 (Figure 7). The population decline over the past 11 years, from 2005 to 2015, was even greater, at 3.91% per year. In most regions and states where the American Kestrel was common enough to monitor its population with the BBS, the trends were declining. Survey-wide, over the period from 1966 to 2015, the decline was 1.39% per year (Sauer et al. 2017). Overall the declining population was evident throughout most of the United States and Canada (Figure 8). Patches of increases are found in parts of the southeastern and midwestern United States, but data for the vast majority of regions indicate declining populations. Partners in Flight recently estimated that the American Kestrel population had been reduced by 48% from 1970 to 2014.

Christmas Bird Counts from 1959 to 1988 do not indicate a change in the population, and migration counts from Hawk Ridge in Duluth, Minnesota, are mixed. According to the Raptor Population Index (Farmer et al. 2008), migration counts of the American Kestrel were stable  from 1974 to 2016 (Figure 9). However, recent trends, from 2006 to 2016, were near significant and declining by 3.33% per year. The recent counts at Hawk Ridge are approaching those observed prior to 1990. Counts in the 1990s were much higher than those counted prior to 1990 and those observed since 2003.

Nesting densities of the American Kestrel have been estimated by Cade (cited in Smallwood and Bird 2002). His estimates ranged from 0.1 to 1.7 pairs per km2 across North America. 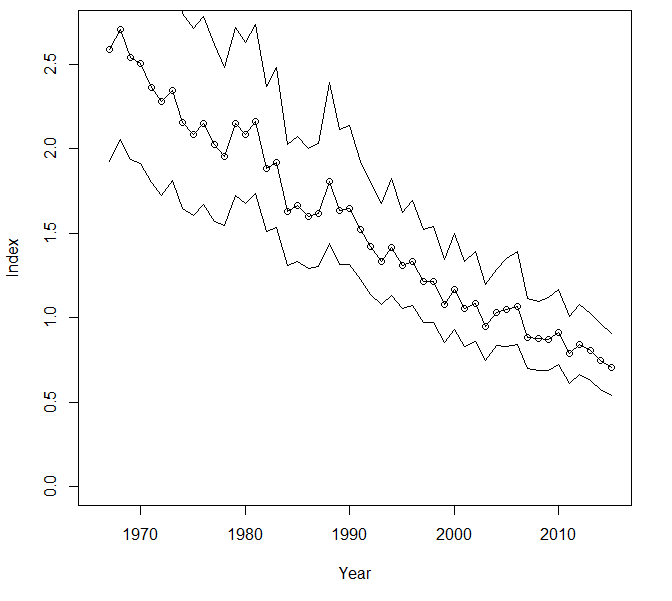 Breeding population trend for the American Kestrel in Minnesota for 1967–2015 based on the federal Breeding Bird Survey (Sauer et al 2017).

Breeding population trend map for the American Kestrel in the United States and Canada for 1966–2015 based on the federal Breeding Bird Survey (Sauer et al 2017).

Fall migration counts of the American Kestrel at Hawk Ridge, Duluth, Minnesota, as calculated by the Raptor Population Index from 1974 to 2016.

Given a Continental Concern Score of 11/20, the American Kestrel is considered of moderate conservation concern in North America (Rosenberg et al. 2016). Its high score was primarily because of its large population decline. However, there are currently few conservation actions for the species, primarily because of its large breeding distribution, which extends from Alaska to the southern tip of Argentina. Nevertheless, the widespread decline in its populations is noteworthy and a cause for alarm.

The American Kestrel has experienced considerable changes in population levels since European settlement in North America. As previously noted, American Kestrels expanded their population and distribution in the 18th and 19th centuries with widespread deforestation and conversion to agriculture, especially to pasture land. Modern agricultural practices that remove available nest sites and hunting perches have reduced populations. Providing nest boxes can partially mitigate these reductions but requires extensive efforts and is difficult to implement over large areas.

Shooting of American Kestrels, especially during migration periods, was likely a contributing factor to some reduction in the 20th century until migratory bird laws were enacted and enforced. Effects of pesticides during the DDT era may have contributed to some reductions in populations but are not thought to be a major cause of population decline. The species’ diet does not have a strong association with aquatic environments, where contaminant levels are often high, and its foods are primarily in the lower trophic levels.

Recent declines in the species have been largely attributed to “clean farming” and the subsequent lack of suitable nest or perch sites, and to the lack of available food (Smallwood and Bird 2002). The effects of current use of pesticides on American Kestrels are unclear; indirect effects of pesticides from their reduction of arthropod food resources may be greater.

The introduction of the European Starling to the United States in the late 1800s and its appearance in Minnesota in 1929 may have contributed to population declines because starlings compete for nest boxes. More recently, predation by Cooper’s Hawks has been reported, but its effect on populations is largely unknown.

The American Kestrel has been determined to be “climate threatened” because of a potential 13% loss in available breeding habitat from climate change during the next 80 years (Langham et al. 2015). In contrast, wintering habitat is projected to increase by 61% (National Audubon Society 2015).