A regular breeding resident and migrant in Minnesota, the Blackburnian Warbler was common during the Minnesota Breeding Bird Atlas (MNBBA).

The Blackburnian Warbler is primarily found in the northeastern and upper midwestern regions of the United States and the eastern and central provinces of Canada. It is also found south in the Appalachian Mountains as far as northern Georgia. The highest densities have been observed in northeastern Minnesota, northern Wisconsin, central Ontario, and northern New York (Figure 1).

Cup-nest, primarily in coniferous trees of variable height and usually high in the canopy. 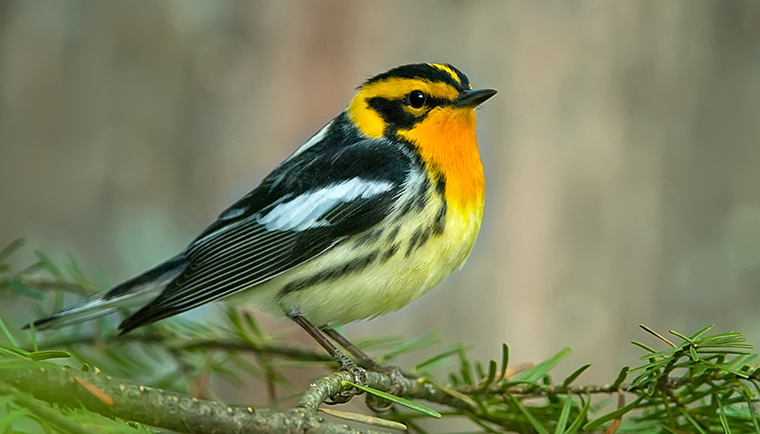 Breeding distribution and relative abundance of the Blackburnian Warbler in North America based on the federal Breeding Bird Survey from 2011 to 2015 (Sauer et al. 2017).

Described by Roberts (1932) as found in evergreen forests in areas as far south as northern Isanti County, as well as in northern Sherburne, west to northeastern Otter Tail, eastern Becker, and Polk Counties. He also reported confirmed nesting in Becker, Cass, Cook, Itasca, and Lake Counties, and in Itasca State Park and Mille Lacs. All of these areas either had eggs, young in the nest, or young out of the nest being fed by adults. Roberts described the population in the evergreen forests as “evenly distributed and generally common through the entire region.”

By 1975, Green and Janssen emphasized that the Blackburnian Warbler’s primary distribution was in the northeastern and north-central regions, essentially the Laurentian Mixed Forest Province. They expanded confirmed nesting to include Beltrami, Clearwater, Hubbard, Mille Lacs, Pine, and St. Louis Counties. The authors highlighted that this species was found sparingly in the eastern fringes of the northwestern part of the state and the northern portions of counties in the east-central regions and that none had been observed in the cedar and tamarack bogs of Isanti and Sherburne Counties since the 1930s. Several years later, Janssen (1987) and Hertzel and Janssen (1998) added the species to the list of confirmed nesting in a total of seven counties since 1970, including Aitkin, Crow Wing, Clearwater, Cook, Hubbard, Lake, and St. Louis Counties.

The Minnesota Biological Survey recorded 526 breeding season locations, most of which were in areas previously identified. However, they also identified the presence of the Blackburnian Warbler in north-central and eastern Roseau, northeastern Marshall, southeastern Mahnomen, northeastern Becker, northeastern Wadena, northern Mille Lacs, Kanabec, and eastern Chisago Counties, plus a stray observation in northeastern Douglas County (Minnesota Department of Natural Resources 2016).

The MNBBA reinforced the previously described breeding distribution with virtually all 1,622 records reported in a total of 786 blocks, aside from three, in the Laurentian Mixed Forest Province (Figure 2). The exceptions were nesting observations in northwestern Minnesota, including possible nesting in central Roseau County and probable nesting in northeastern Marshall County. As with many secretive nesting species, only 4.6% of block records reported confirmed nesting (Figure 3; Table 1). The MNBBA did not add any additional counties with confirmed nesting records; probable and possible breeding activity was greatly increased for poorly sampled counties in extreme northern Minnesota, such as Beltrami, Koochiching, and Lake of the Woods.

Current evidence suggests that the Blackburnian Warbler has experienced a northward contraction all along the southern, western, and northwestern fringes of its breeding range in Minnesota. Isolated populations appear to exist in some areas where patches of large coniferous trees are found but certainly not in an “even distribution,” as suggested by Roberts (1932). Patches with confirmed nesting still exist in many parts of central and southern Wisconsin, even as far south as Walworth County (Cutright et al. 2006). This may be due to the greater presence of hemlock in Wisconsin. The National Forest Bird (NFB) monitoring program identified the Blackburnian Warbler as equally prevalent in mature white pine and hemlock forest cover types; the latter was exclusively found in the Chequamegon-Nicolet National Forest in northern Wisconsin (Niemi et al. 2016, p. 153).

In his review of the Blackburnian Warbler in North America, Morse (2004) cited limited evidence for range expansion into western Canada, as well as changes in the Blackburnian Warbler’s distribution in New York State over the past 100 years. He also suggested that the changes in New York were a result of recent reforestation in the Appalachian Plateau.

The Blackburnian Warbler’s presence during the breeding season can be easily overlooked because its high-frequency, insect-like song is most often emitted from the tallest of coniferous trees, where observations are challenging. Given its more southerly presence in Wisconsin, this species warrants more attention in areas of Minnesota with tall coniferous pines or spruce by observers with good hearing and visual skills. 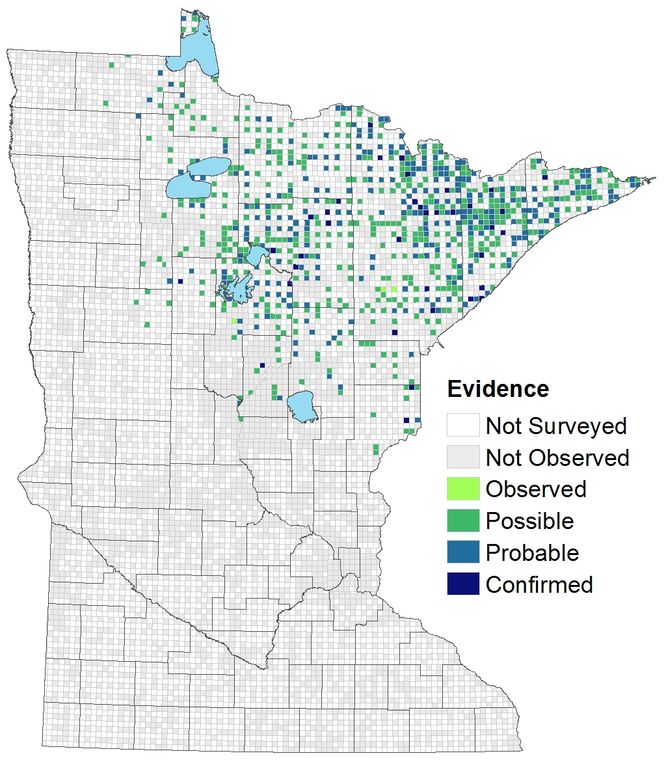 Breeding distribution of the Blackburnian Warbler in Minnesota based on the Breeding Bird Atlas (2009 – 2013).

Summary statistics of observations by breeding status category for the Blackburnian Warbler in Minnesota based on all blocks (each 5 km x 5 km) surveyed during the Breeding Bird Atlas (2009-2013).

Summary statistics for the Blackburnian Warbler observations by breeding status category for all blocks and priority blocks (each 5 km x 5 km) surveyed during the Minnesota Breeding Bird Atlas (2009-2013).

Roberts (1932) aptly described the Blackburnian Warbler’s habitat as “most commonly in heavy mixed timber, keeping constantly in the topmost branches of the tallest trees,” adding that “Towering pines and spruces are its special favorites.” Morse (2004) considers its habitat to be “coniferous and mixed coniferous-deciduous forests, and especially in mature forests” (Collins et al. 1982). In Minnesota, the NFB program found it most abundant in white pine forests, but it was also common in mature aspen-spruce-fir, jack pine, and red pine forest cover types (Figure 4).

Hobson and Bayne (2000) emphasized that the species was most common in white spruce forests in Saskatchewan and absent from black spruce and jack pine. Its limited use of black spruce and tamarack stands in the Agassiz Lowland Ecological Subsection in northern Beltrami County was consistent with their observations (Bednar et al. 2016). Niemi and Hanowski (1992) found the species in low abundance in the Red Lake Peatland of the Agassiz Lowlands region of northern Minnesota, reporting that it was primarily limited to mixed lowland white cedar and mixed lowland conifer forest cover types. The MNBBA point counts primarily detected the species in pine and upland coniferous forests (Figure 5). 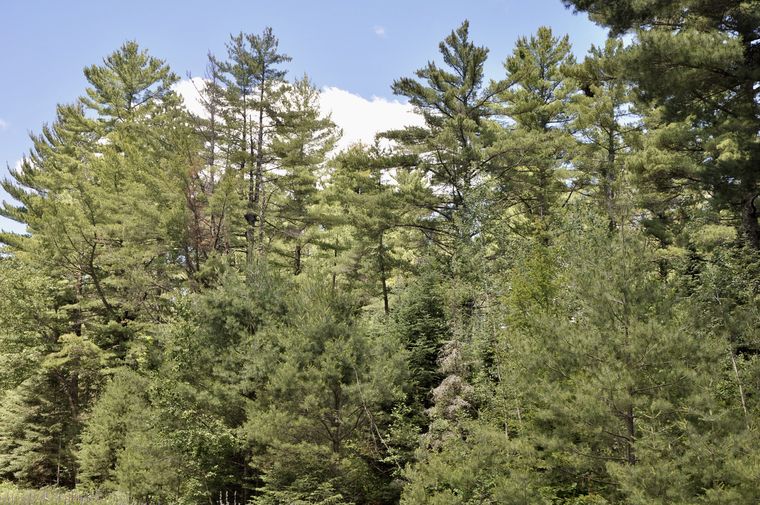 Habitat profile for the Blackburnian Warbler based on habitats within 200 m of point counts where the species was present during the Minnesota Breeding Bird Atlas (2009-2013).

Partners in Flight estimated a global population of 14 million breeding adults (Rosenberg et al. 2016) and previously estimated that 4.3% (600,000 adults) of its population occurred in Minnesota (Partners in Flight Science Committee 2013). Based on random point counts throughout the state, the MNBBA estimated a breeding population over 4 times that size, at 2.76 million breeding adults.  However, the estimate was highly variable with wide confidence intervals and should be interpreted with caution. Population estimates for Canada, where its primary breeding population resides, ranged widely from 5 to 50 million adults (Environment Canada 2011).

The federal Breeding Bird Survey (BBS) trends in Minnesota from 1967 to 2015 indicated a stable population (Figure 6). The species was not abundant enough in Michigan or Wisconsin to confidently estimate a trend, but Ontario also recorded a stable population trend over the same time frame. In contrast, Manitoba had a significantly declining population trend of 2.27% per year. Overall, the species trend was also stable when all routes in Canada, in the United States, or survey-wide were included in the analyses from 1966 to 2015. Partners in Flight (Rosenberg et al. 2016) estimated an overall increase of 10% in the Blackburnian Warbler population from 1970 to 2014. Estimates from the NFB also suggested a stable population, based on consistent annual sampling of 215 forest stands in northern Minnesota from 1995 to 2015 (Figure 7). 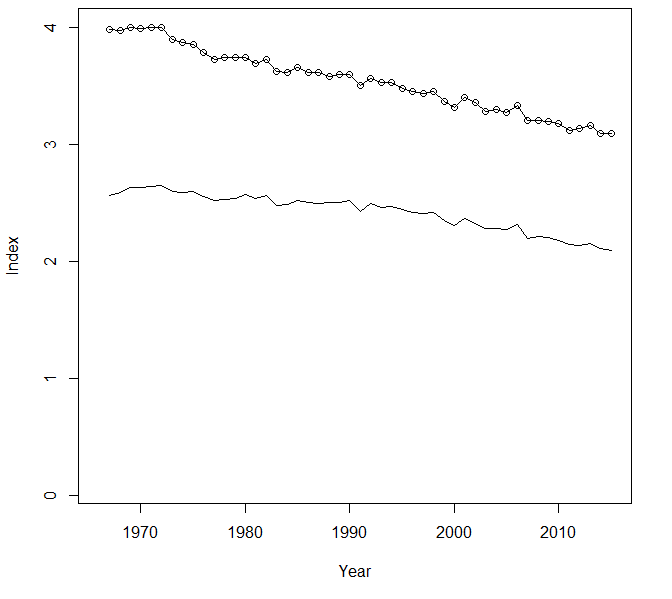 Breeding population trend for the Blackburnian Warbler in Minnesota for 1967–2015 based on the federal Breeding Bird Survey (Sauer et al 2017). 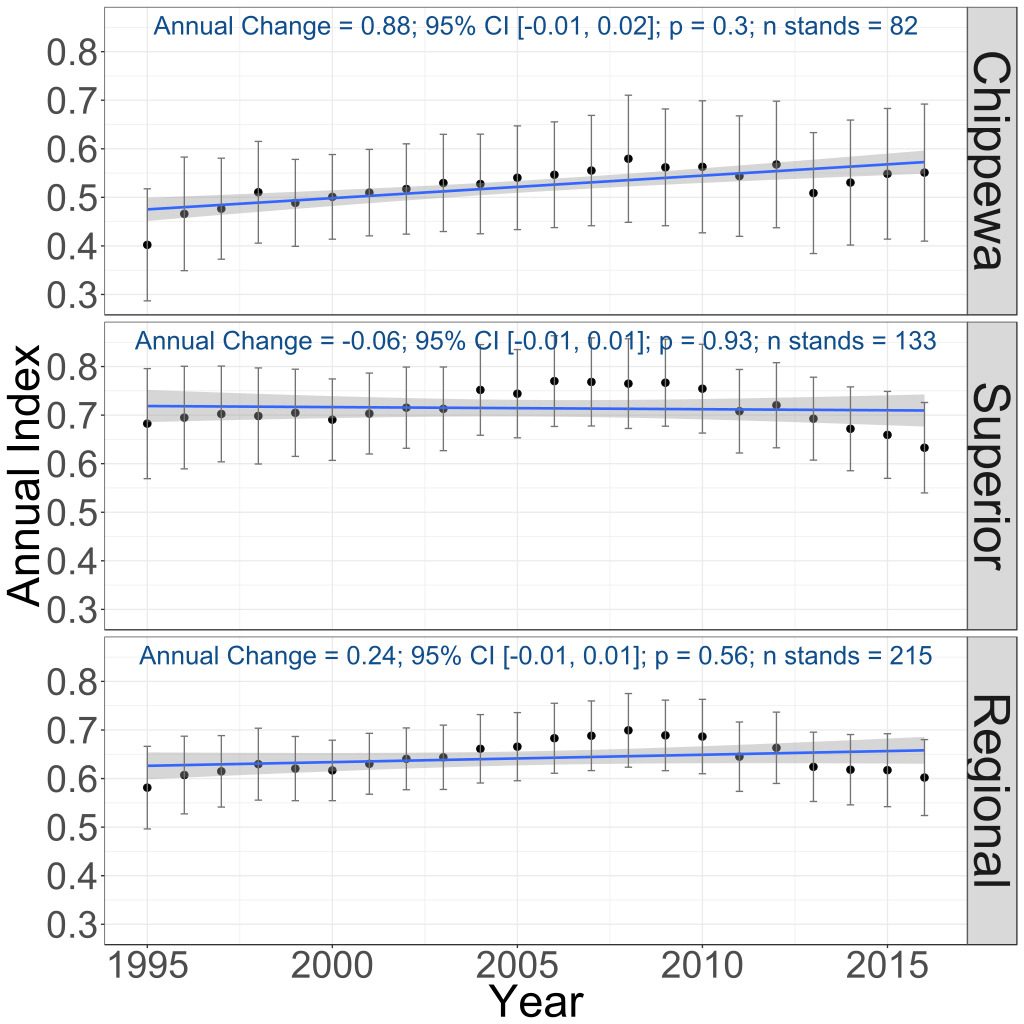 Breeding population trends of the Blackburnian Warbler in the Chippewa and Superior National Forests and the combined regional trend, 1995-2016 (Bednar et al. 2016).

Overall, Partners in Flight (Rosenberg et al. 2016) calculated a score of 9/20 in their assessment of conservation concerns for the Blackburnian Warbler. This score indicated that the species is of minimal conservation concern in North America. Environment Canada (2011) stated that there were few known threats for this species on its breeding grounds. However, the authors emphasized that: 1) short logging rotations will decrease the age of coniferous forests below optimum levels, 2) the species is sensitive to habitat fragmentation (e.g., Hobson and Bayne 2000), and 3) deforestation on wintering grounds in northern South America could be detrimental (Terborgh 1989). Howe (1979) found the Blackburnian Warbler on small islands (<1 ha) in Burntside Lake in northern St. Louis County. Where large pines are present, the species may be tolerant of reduced patch sizes as long as suitable tall coniferous trees exist.

Morse (2004) summarized that many factors could ultimately affect the population of Blackburnian Warblers, including deforestation in North and South America. He also identified climatic factors, such as late snow in spring and cold and rain during the breeding season. Nest predation by squirrels and birds such as jays and accipiters are detrimental to successful nesting. In its review of climate change susceptibility in North American birds, Langham et al. (2015) and the National Audubon Society (2015) identified this species as “climate threatened” because of the potential northward movement of its primary habitat, coniferous forests. The society also points out that the species is one of the most southerly distributed species in its wintering grounds in South America, having even greater distances to migrate as its breeding grounds move northward. In addition, Longcore et al. (2013) listed the Blackburnian Warbler as susceptible to tower kills.

In Minnesota, a key issue to sustaining this warbler is maintenance of large coniferous trees, especially white pine and white spruce. The Blackburnian Warbler is emblematic of the statuesque, towering pines and spruce found in Minnesota. Reforestation of these large coniferous trees in many marginal areas of the western and southern fringes of its current range could provide great benefits to this species.