A regular breeding resident and migrant; the Blue Grosbeak was a rare species during the Minnesota Breeding Bird Atlas (MNBBA).

Broadly distributed across the southern United States, from central California east to the mid-Atlantic coast states, where it is found from New Jersey south to central Florida. Breeding populations also extend south throughout Central America. In the Great Plains, the breeding range extends north to southern North Dakota and southwestern Minnesota. The species reaches its highest breeding densities in the southeastern United States, from southern New Jersey south to Georgia and Alabama (Figure 1).

A medium- to long-distance migrant that winters in Central America and the Caribbean; there are occasional reports from the very northern portion of South America.

An omnivore that feeds on insects and seeds and forages on the ground and on foliage.

An open-cup nest placed in small trees or shrubs. 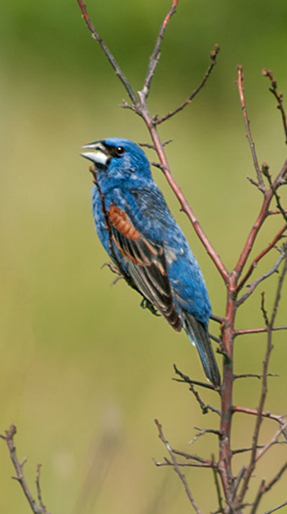 Breeding distribution and relative abundance of the Blue Grosbeak in North America based on the federal Breeding Bird Survey, 2011–2015 (Sauer et al. 2017).

A relative newcomer to the state, the Blue Grosbeak was first observed in Rock County in the summer of 1961 near the small town of Beaver Creek (Anderson 1962), just miles from the borders of South Dakota and Iowa. Two females and a male were seen along a gravel road. A dead male, the apparent victim of a car collision, was found just a little farther away.

The Blue Grosbeak steadily expanded its range northward from the core of its breeding distribution in the southern United States throughout the 20th century. Lowther and Ingold (2011) note that it isn’t entirely clear when the expansion began. The species had been reported sporadically north of its breeding range in the northeastern United States since the early 1800s. But, farther west, in the northern Great Plains, the northward expansion clearly began in the early 1900s. Anderson (1907) considered it a hypothetical species in Iowa until 1932, when the first observation was documented. The first specimen was collected in 1934 (Youngworth 1958), but nesting was not confirmed in the state until 1964 (Jackson et al. 1996). Although Blue Grosbeaks are now found in scattered locations throughout Iowa, they are most abundant in the far western region along the Missouri River (Iowa Ornithologists’ Union 2016). In South Dakota, the earliest known report was in 1911 on the Pine Ridge Indian Reservation in the southwestern corner of the state (Lovell 1951). Today, the species is broadly distributed throughout the southern and western regions of the state (Drilling et al. 2016). In North Dakota, the grosbeak was first observed in 1967 in Emmons County, on the South Dakota border in south-central North Dakota (Igl 1995). It is still an uncommon species in the state; the first nesting was documented in 1979. According to Igl (1995), most observations in the state are near the Missouri River, where shrubby riparian habitats are common.

Following the first documented observation of Blue Grosbeaks in Minnesota in southwestern Rock County, the species was consistently observed in the area and became a regular summer resident. By 1975, Green and Janssen reported it was slowly expanding north and east into Murray and Nobles Counties as well.  A pair was even observed much further east in Dakota County on May 17, 1972 (Dempsey 1980). The only evidence of breeding, however, was “an observation of two adults and three immatures near Beaver Creek, Rock County, on September 4, 1972” (Green and Janssen 1975). Breeding was inferred also during the 1974 breeding season, when a female was observed carrying nest materials at Blue Mounds State Park (Eckert 1975). Finally, in 1976, nesting was confirmed at the park (Janssen 1987). Since then, with Rock County as a stronghold, the grosbeak has steadily expanded its range farther east and north. By 1998 Hertzel and Janssen confirmed nesting in 4 counties: Murray, Nobles, Pipestone, and Rock.

As the Minnesota Biological Survey staff were conducting fieldwork in southwestern Minnesota, they identified 69 breeding season locations for the Blue Grosbeak. Records were documented as far north as the Minnesota River valley in Redwood County and as far east as Brown County (Minnesota Department of Natural Resources 2017). Meanwhile, other observers were reporting summer records even farther east and north of the southwest corner of the state. A male was observed singing in early July 1988 at the Felton Prairie in Clay County (Bolduc 1998) and, in addition to the initial sighting of a pair in 1972, an immature male was seen in Dakota county in July 1999 (Minnesota Ornithologists’ Union 2017).

During the MNBBA, participants reported 64 Blue Grosbeak records in 1.1% (52/4,740)2 of the surveyed atlas blocks and 1.4% (33/2,337) of the priority blocks. Breeding evidence was documented in 4 blocks (Figures 2 and 3; Table 1). The birds were reported from 19 of Minnesota’s 87 counties (1 block in the Minnesota River valley straddled Renville and Redwood Counties and 2 blocks straddled Nicollet and Blue Earth Counties) and were confirmed nesting in 3 counties: Dakota, Lyon, and Renville. One of the four blocks with confirmed nesting straddled Renville and Redwood Counties, but the observer provided notes that documented the birds were observed in Renville County (“seen along co 15; pair with female carrying food to unseen nest”).  The Interactive Map for the Blue Grosbeak, however, displays the location of the block so both counties are highlighted for confirmed nesting. Blue Grosbeaks were observed as far north as Stevens and Clay Counties in western Minnesota, and as far north as Dakota County in eastern Minnesota.

The Blue Grosbeak is a bit of an enigma. As Iowa ornithologist William Youngworth noted in 1958, its expanding distribution is just the opposite of what has been observed for decades for the majority of grassland species found in the Great Plains, whose populations have notably declined. Factors responsible for its northward movements are poorly understood. The species, which at first glance looks like an Indigo Bunting on steroids, is an uncommon bird throughout much of its breeding range. It is also a poorly studied bird. Little is known regarding many aspects of its life history, including its breeding biology, behavior, site fidelity, and reproductive success (Lowther and Ingold 2011). 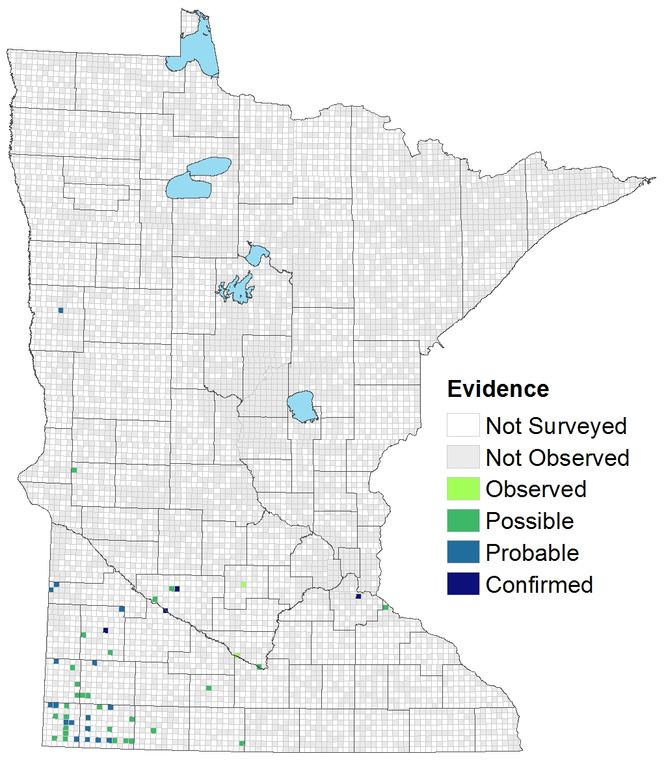 Breeding distribution of the Blue Grosbeak in Minnesota based on the Minnesota Breeding Bird Atlas (2009–2013).

Summary statistics of records by breeding status category for the Blue Grosbeak in Minnesota based on all blocks (each 5 km × 5 km) surveyed during the Minnesota Breeding Bird Atlas (2009–2013).

Summary statistics for Blue Grosbeak records by breeding status category for all blocks and priority blocks (each 5 km ×5 km) surveyed during the Minnesota Breeding Bird Atlas (2009–2013).

The grosbeak inhabits a wide range of semiopen habitats, including woodland edges, overgrown fields, shrubby thickets along streams or in grasslands, and hedgerows (Figure 4). Although it occupies a diversity of sites throughout its range, some of the common primary habitat requirements appear to include low canopy cover, low shrub density, few trees, and heavy ground cover. It is often found in low shrubby vegetation near water (Lowther and Ingold 2011).

In Minnesota, the birds have been observed in farm shelterbelts (Huber 1964), farm woodlots (McIntosh 1964), and shrubby riparian thickets (Eckert 1975). A breeding territory in Dakota County was described by Hertzel (2012) as “an overgrown, weedy embankment dike” bordering a landfill. “A few cedar trees were scattered about the top of the dike and a marshy area was directly to the west.” Common features in many descriptions are small trees or shrubs located near water or wetlands. 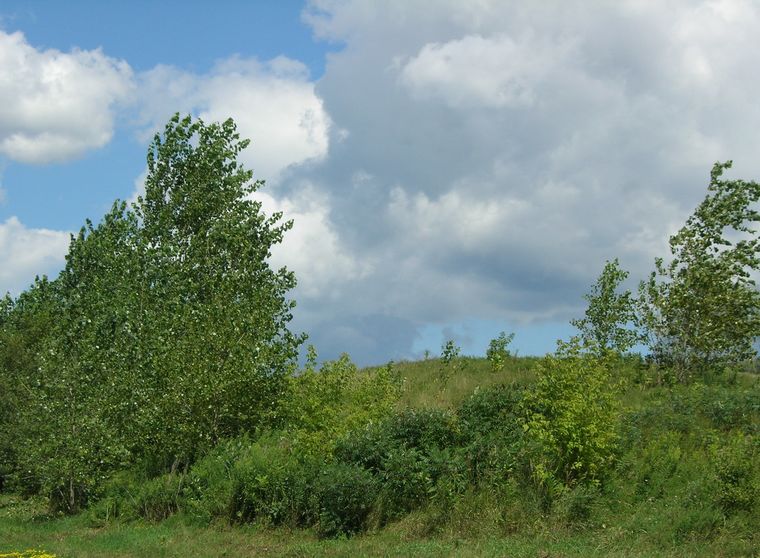 On the northern periphery of its breeding range in Minnesota, the Blue Grosbeak is rarely encountered along BBS routes, even in southwestern Minnesota. Some of the highest detections along BBS routes are found along the mid-Atlantic coast, where an average of 12 grosbeaks are observed on routes in North Carolina, 16 in South Carolina, and 15 in Delaware (Sauer et al. 2017).

Since the BBS began in 1966, the Blue Grosbeak has demonstrated a slow and significant population increase, averaging 0.81% per year from 1966 to 2015 (Figure 5). Biologists estimate that the population has increased 45% from 1970 to 2014 (Rosenberg et al. 2016). The species is not detected frequently enough in Minnesota to generate a robust statistical analysis, but BBS data reflect the species’ steadily expanding population in the state (Sauer et al. 2017).

Although factors responsible for the species’ expanding distribution and increasing population are not well understood, Johnson (1993) postulated that the changes were due to climate change. In particular, he suggested that a suite of southern species expanding north, including the Blue Grosbeak, were responding to increases in annual precipitation and humidity, climate variables that characterized the regions from which they were expanding. More than a century earlier, Coues (1874) attributed the bird’s northern expansion to clearing of the eastern deciduous forest. 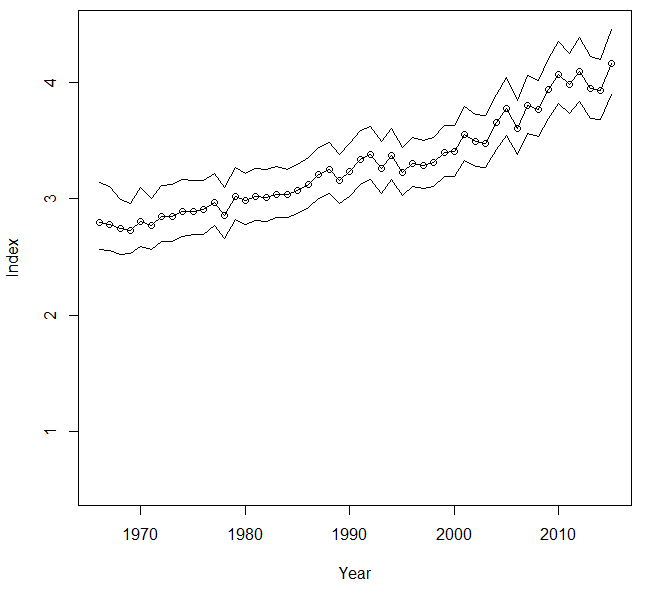 Breeding population trend for the Blue Grosbeak in North America for 1966–2015 based on the federal Breeding Bird Survey (Sauer et al. 2017).

Although it is rarely abundant anywhere, the Blue Grosbeak is expanding its range and has an increasing population. It is not considered a conservation priority at either the federal or state level and has been assigned a relatively low Continental Concern Score of 8/20 (Rosenberg et al. 2016). The North American Conservation Initiative (2010) rated its vulnerability to climate change as low. Indeed, as temperatures continue to rise, the Blue Grosbeak may continue its northward and eastward expansion throughout the state, gradually becoming an even more prominent member of the state’s avifauna.