A regular summer resident and migrant. The Blue-headed Vireo was an uncommon species during the Minnesota Breeding Bird Atlas (MNBBA).

Found throughout northeastern North America, south in the Appalachian Mountains to northeastern Mississippi, and northwest across Canada to British Columbia (Figure 1). The highest densities are observed in Nova Scotia and north-central Ontario.

Short- to long-distance migrant, the species overwinters in the southeastern United States, Mexico, and Central America.

Insects and some spiders gleaned from foliage.

Cup nest suspended from fork usually at the end of a conifer shrub or sapling branch. 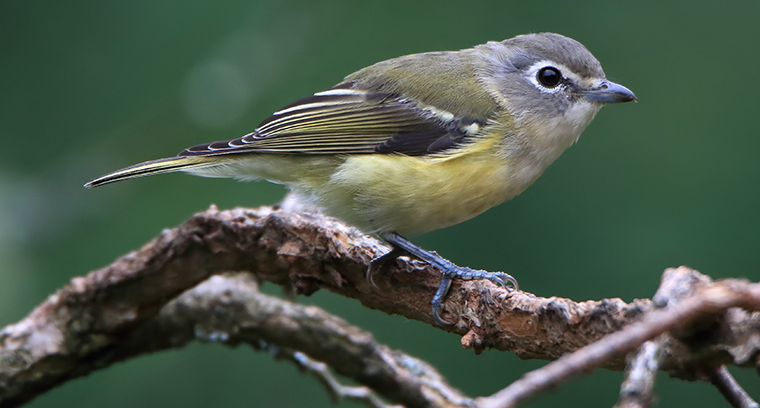 Breeding distribution and relative abundance of the Blue-headed Vireo in North America based on the federal Breeding Bird Survey from 2011 to 2015 (Sauer et al. 2017).

Roberts (1932) primarily knew the Blue-headed Vireo from his time at Itasca State Park and described it overall as a “frequent summer resident of the coniferous forests.” He reported nesting records from 1886 in Becker County (nest with eggs), at Itasca Park in 1919 and 1928 (nests with eggs), and one from Itasca County in 1930 (young ready to leave the nest). Overall he described its breeding distribution as south to Lake Mille Lacs, west to Itasca Park, and northeast to Cook, Lake, and St. Louis Counties.

During nest searches in Pine County in 1996, Pirjo and Dr. Markku Kuitunen of the country of Finland found a nest of the Blue-headed Vireo. This observation was gathered as part of a research project on the Least Flycatcher at the Natural Resources Research Institute at the University of Minnesota–Duluth. Unknown to them at the time, this is the most southerly confirmed nesting of the species in Minnesota.

The MNBBA included 915 breeding season records of the Blue-headed Vireo, including many from Cook and Lake Counties (Figure 2). These records also extended its possible breeding range to Kittson and Marshall Counties in the northwest as well as westward to Becker, Polk, and Wadena Counties. The species was recorded in 10.9% (514/4,734) of the surveyed atlas blocks and 13.2% (309/2,337) of priority blocks (Figure 3; Table 1). The MNBBA added confirmed nesting in Beltrami and Lake of the Woods Counties, plus evidence of probable nesting in Koochiching and Roseau Counties. It is likely that the Blue-headed Vireo nests throughout the northern region of Minnesota and as far northwest as coniferous trees are present.

Roberts (1932) noted a June 4, 1873, observation by Coues from Pembina on the Red River, at the border of North Dakota and Minnesota. This date also could represent a late migrant. Regardless, habitats along the Red River and other suitable habitats are very rare or no longer exist in many of these western counties. Similarly, many potential coniferous forests in its southwestern or southern range in Minnesota have been greatly reduced and converted to agricultural or urbanized areas.

Cutright et al. (2006) cited observations in the early 1900s from southern areas of Wisconsin and range retractions northward. However, during the Wisconsin breeding bird atlas from 1995 to 2000, nesting was confirmed in Calumet and Waukesha Counties. Waukesha County is south of the Minnesota and Iowa border, while Calumet County is equivalent in latitude to Winona County. Perhaps the unusual observation in 1983 from Houston County cited by Janssen (1987) should signal further scrutiny along the southeastern counties in Minnesota. In their review of the Blue-headed Vireo in North America, Morton and James (2014) emphasized that the species has been recolonizing places where they formerly occurred in the nineteenth century. In these areas reforestation of conifers has been implemented in the midwestern United States, such as in Wisconsin, Illinois, Michigan, and the province of Ontario. 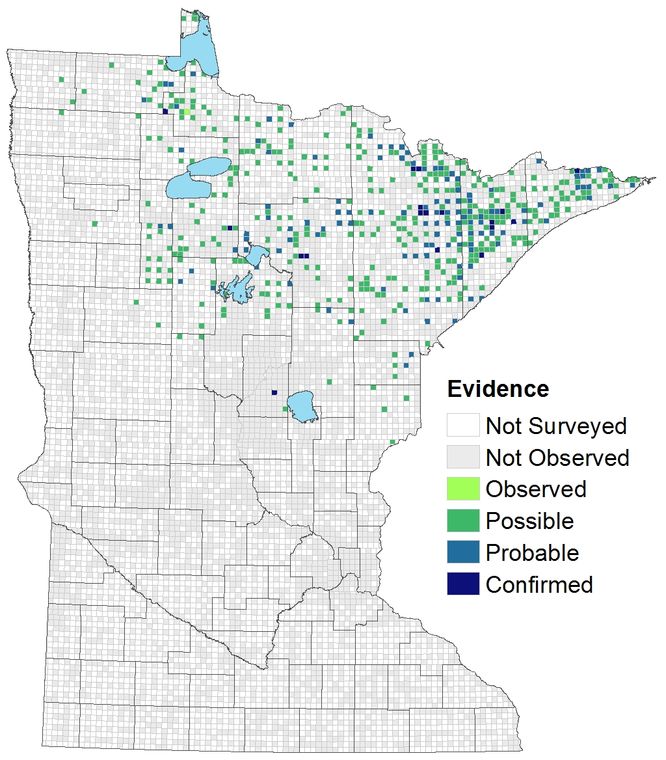 Breeding distribution of the Blue-headed Vireo in Minnesota based on the Breeding Bird Atlas (2009 – 2013).

Summary statistics of observations by breeding status category for the Blue-headed Vireo in Minnesota based on all blocks (each 5 km x 5 km) surveyed during the Breeding Bird Atlas (2009-2013).

Summary statistics for the Blue-headed Vireo observations by breeding status category for all blocks and priority blocks (each 5 km x 5 km) surveyed during the Minnesota Breeding Bird Atlas (2009-2013).

Blue-headed Vireo breeding haunts are described as evergreen forests with spruce, hemlock, and pine or often associated with deciduous growth with alder or willow in the understory (Morton and James 2014). In Minnesota, the species primarily occurs in coniferous forests (Niemi and Pfannmuller 1979; Green 1995) (Figure 4).

The National Forest Bird (NFB) Monitoring Program included 1,731 records during the breeding season between 1995 and 2010 (Niemi et al. 2016) in the Chippewa and Superior National Forests. Observations have occurred in many forest cover types, but it has been found most abundantly and most frequently in black spruce-tamarack forests. Additional cover types commonly used include pine forests (jack, red, and white) and mixed swamp conifer forests comprised of white cedar, spruce, and black ash. In the extensive lowland conifer forests of the Agassiz Lowlands Ecological Subsection, the Blue-headed Vireo was uncommon. This species was most often found in mixed black spruce-tamarack forest types (Bednar et al. 2016). 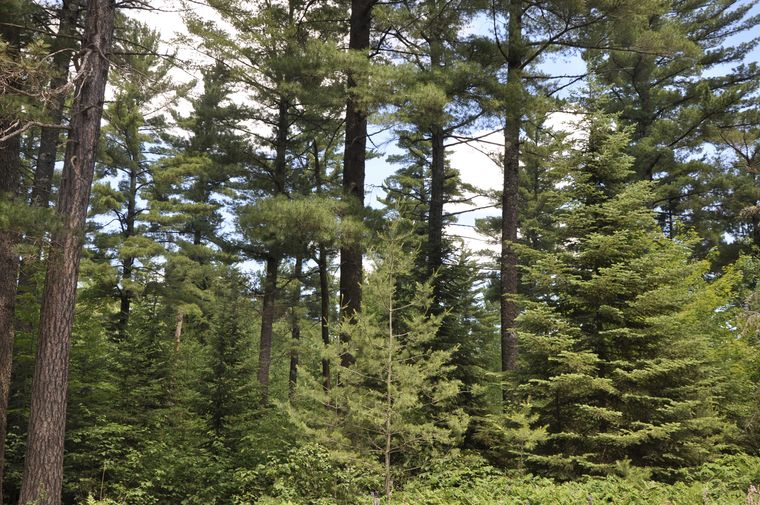 Habitat profile for the Blue-headed Vireo based on habitats within 200 m of point counts where the species was present during the Minnesota Breeding Bird Atlas (2009-2013).

The federal Breeding Bird Survey (BBS) trend in Minnesota was unreliable, but estimates for the Boreal Hardwood Transition Region indicated a significantly increasing population of 3.57% per year from 1966 to 2015 (Figure 6). Using data from the BBS, Rosenberg et al. (2016) suggested an overall 200% increase in the breeding population from 1970 to 2014! The North American trends for the Blue-headed Vireo illustrate increasing populations throughout the species’ breeding range, with the exception of its extreme northwestern distribution in Canada (Figure 7).

In contrast, data from the NFB program indicated a non-significant trend from 1995 to 2016 and a definite downward trend from 2005 to 2016 (Figure 8). Despite substantial increases in many parts of the species’ range, details from patterns of change in BBS trends from Minnesota indicated a large declining trend in north-central Minnesota (e.g., in the Chippewa National Forest) and only moderate increases in northeastern Minnesota (Figure 7). Coverage in the national forests during the NFB program was greater than during the BBS in which the BBS had a mean of less than 1 detection per route per year. This discrepancy in estimates of species trends had previously been identified and discussed by Niemi et al. (2016, Table 12). In general, the species is uncommon throughout the forests of Minnesota. Breeding populations may be locally and regionally variable and difficult to reliably detect. 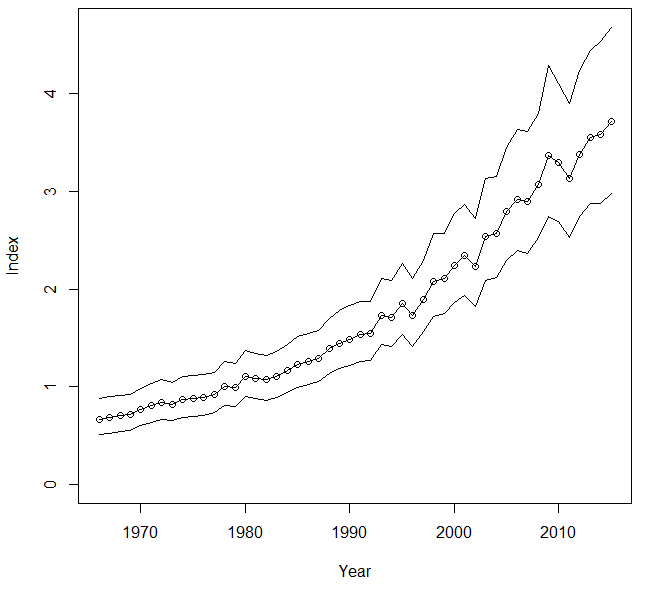 Breeding population trend for the Blue-headed Vireo in the Boreal Hardwood Transition Region from 1966–2015 based on the federal Breeding Bird Survey (Sauer et al. 2017).

Population trend map for the Blue-headed Vireo in North America from 1966–2015 based on the federal Breeding Bird Survey (Sauer et al. 2017). 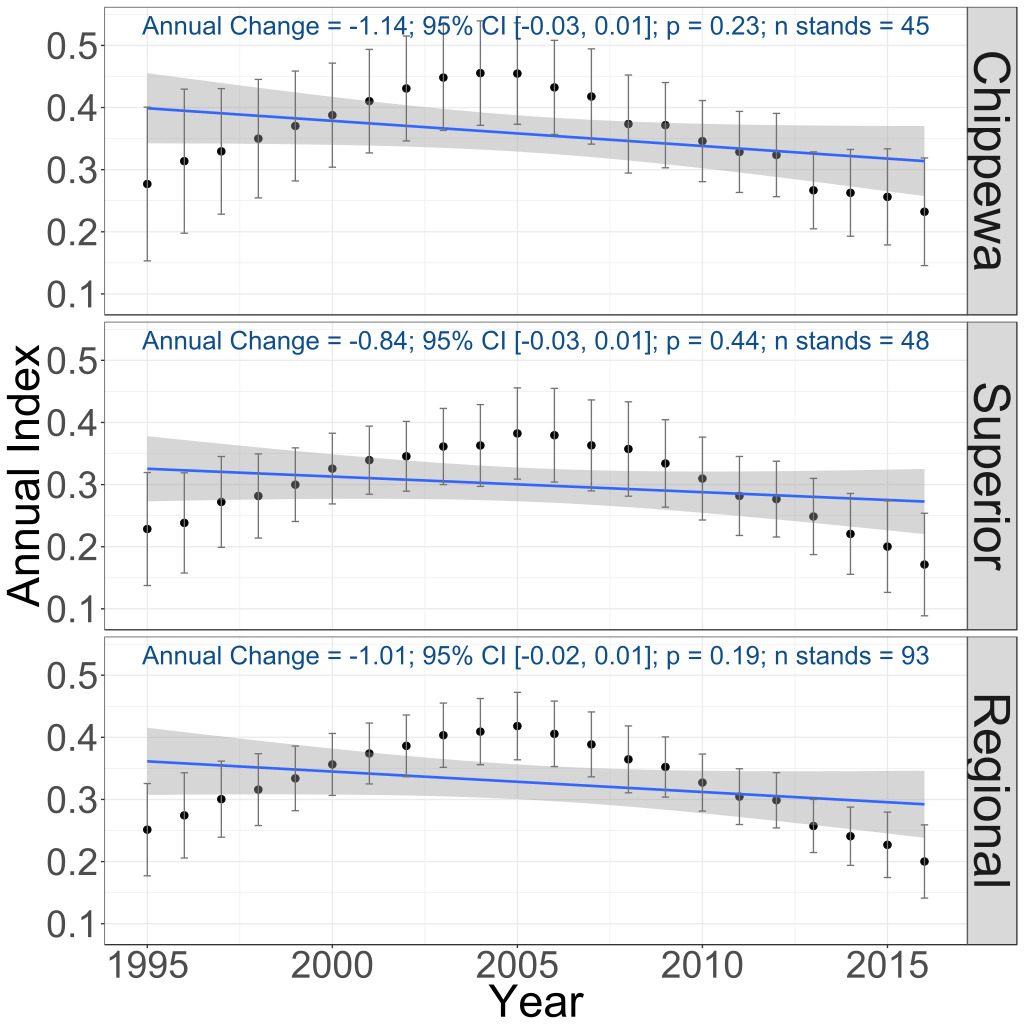 Breeding population trends of the Blue-headed Vireo in the Chippewa and Superior National Forests and the combined regional trend, 1995–2016 (Bednar et al. 2016).

Partners in Flight (Rosenberg et al. 2016) estimated a low overall continental concern for the Blue-headed Vireo of 7/20. Given its current population size and its substantially increasing population throughout many parts of North America, there is little current conservation concern. Its population would be susceptible to substantial increases in logging activity of intermediate and mature coniferous forest cover types. Reductions in its population were predicted under moderate and high harvesting scenarios in Minnesota (Niemi and Hanowski 1992). However, these scenarios have never come to fruition, and coniferous forest cover types have remained stable or have increased (e.g., Niemi et al. 2016, Figure 13). The recent decline of the species in the NFB program deserves closer scrutiny and continued monitoring.

Morton and James (2014) reported low numbers of the species observed in collisions with towers or buildings, suggesting that the species does not appear to be overly sensitive to mortality from human structures. In its review of climate sensitivity for over 500 bird species, Langham et al. (2015) and the National Audubon Society (2015) did not include it as a species of concern. This is likely due its current high population and wide distribution in North America, plus the potential breeding habitat available to the north in Canada.