A regular breeding species and migrant; observed during the winter months along the Mississippi River in southeast Minnesota and in scattered open-water locations in central Minnesota. The Canvasback was a rare species during the Minnesota Breeding Bird Atlas (MNBBA).

The breeding distribution of the Canvasback stretches from central Alaska south across the Prairie Provinces of Canada and the northern Great Plains of the United States. Western Minnesota is the eastern periphery of the species’ breeding range in the United States. Scattered populations are found to the east and west of the core breeding range. Breeding densities are highest in portions of Alaska, the northern Yukon and Northwest Territories, and the prairie potholes of Canada and north-central North Dakota. Its relative abundance within the federal Breeding Bird Survey (BBS) region is illustrated in Figure 1.

A game species, the Canvasback is assigned a Moderately High Continental Priority by the North American Waterfowl Management Plan. It has been assigned a Continental Concern Score of 10/20 by Partners in Flight.

A diving duck that feeds primarily on aquatic plants and aquatic invertebrates.

A platform constructed in emergent vegetation over shallow water; occasionally placed on the ground. 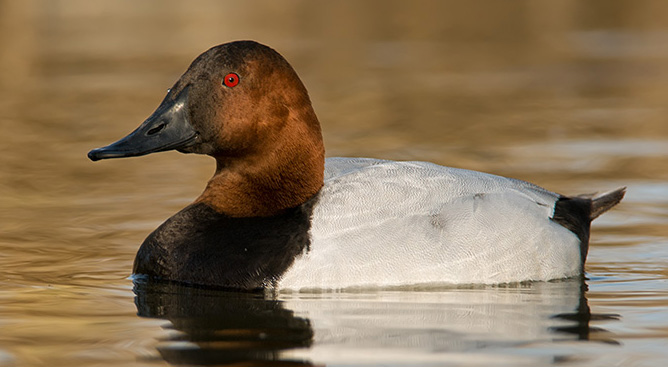 Breeding distribution and relative abundance of the Canvasback in North America based on the federal Breeding Bird Survey from 2011 to 2015 (Sauer et al. 2017).

In 1932 Roberts wrote that the Canvasback, a species of the northern Great Plains, was formerly “a common summer resident” throughout the western region of the state.” At the time of his writing, he lamented that it had “almost entirely disappeared as a breeding bird,” although it continued to migrate through each spring and fall. He references a survey conducted by Breckenridge in June 1929, from Lincoln County in southwestern Minnesota, north to Kittson County in the northwest. Not a single Canvasback was sighted. Prior to this time, in the late 1800s, this handsome species was considered a regular summer resident at Heron Lake in southwestern Minnesota and in some of the larger, shallow wetland basins in northwestern Minnesota, such as Thief and Mud Lakes in Marshall County. Nesting had been confirmed at all three of these sites between 1896 and 1900. Roberts had also observed the birds in Minneapolis in early June 1925, which suggested they were breeding.

More than 40 years later, the Canvasback’s plight had improved considerably. Green and Janssen (1975) described it as a regular summer resident, restricted primarily to the northwestern region of the state, stretching from northwestern Becker County north to the Canadian border. Reports of nesting birds were occasionally documented, however, as far south as Le Sueur, Lincoln, and Lyon Counties, and as far east as Hennepin County.

A few years later, Jessen and Henderson (1979) reported that the summer of 1978 was the “best year for Canvasbacks breeding in Minnesota in recent history.” Jessen, a waterfowl specialist with the Minnesota Department of Natural Resources for many years, reported 699 young from 46 broods. All but 1 of the broods was reported in west-central and northwestern Minnesota; the 1 outlier was in Faribault County, in south-central Minnesota.

In 1987 Janssen included a statewide distribution map in his updated account of the species that identified all of western Minnesota as within the species’ breeding range, stretching east to Hennepin, Sherburne, and Wright Counties in the north, and Faribault County in the south. Noting once again that northwestern Minnesota constituted the core of the species’ range, Janssen reported that nesting had been confirmed since 1970 in 23 counties, from Faribault in the south, east to Hennepin, and north to Kittson. Hertzel and Janssen (1998) later added 4 additional counties to the map, all within the primary breeding range delineated by Janssen (1987).

As of 2015, the Minnesota Biological Survey had reported 46 breeding season locations for the Canvasback. The records were widely dispersed across the grasslands and aspen parklands of western Minnesota. The most eastern location was in northern Freeborn County (Minnesota Department of Natural Resources 2015).

During the MNBBA, participants documented 94 Canvasback reports from 1.6% (77/4,741) of the surveyed atlas blocks and from 1.6% (38/2,337) of the priority blocks. Breeding was confirmed in 24 of the surveyed blocks (Figures 2 and 3; Table 1). The birds were reported in 21 of Minnesota’s 87 counties, and breeding was confirmed in 11 counties, all within the species’ primary breeding range. Only 1 record was found south of the Minnesota River, in Freeborn County; other outliers were in northwestern Hennepin County (French Lake) and in northern Cass County (shallow northern bay of Leech Lake). Seven of the 24 confirmed breeding records were from Marshall County. Grant County was new to the list of confirmed breeding records compiled by Hertzel and Janssen (1998); all 3 reports in the county were of fledged young.

Although never abundant in Minnesota, Canvasbacks have made a significant comeback from the late 1800s, when Roberts (1932) considered them on the brink of extirpation. Beyond Minnesota, the species’ breeding distribution appears to be shifting farther to the northwest in Canada and Alaska, while the bird is becoming less common in the eastern portions of its breeding range in Canada (Mowbray 2002). 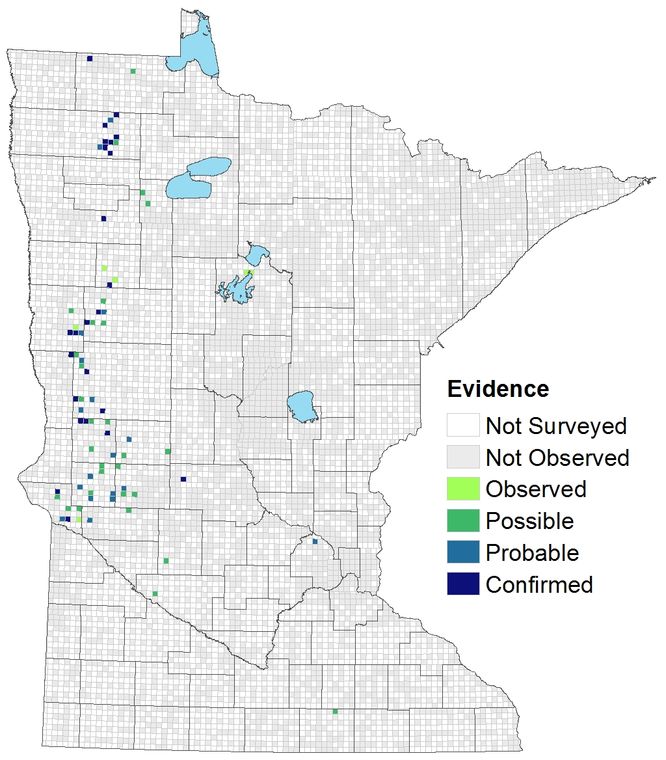 Breeding distribution of the Canvasback in Minnesota based on the Breeding Bird Atlas (2009 – 2013).

Summary statistics of observations by breeding status category for the Canvasback in Minnesota based on all blocks (each 5 km x 5 km) surveyed during the Breeding Bird Atlas (2009-2013).

Summary statistics for the Canvasback observations by breeding status category for all blocks and priority blocks (each 5 km x 5 km) surveyed during the Minnesota Breeding Bird Atlas (2009-2013). 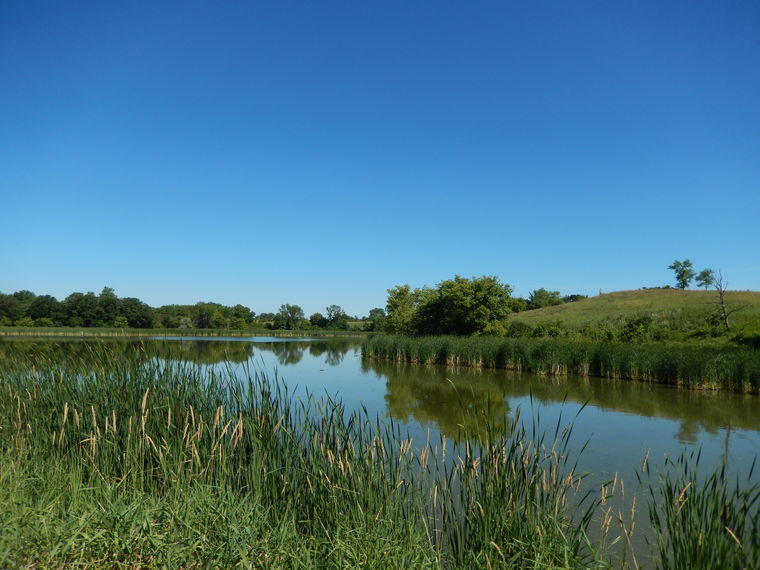 Typical breeding habitat of the Canvasback in Minnesota (© Lee A. Pfannmuller).

The North American Waterfowl Breeding and Habitat Survey is the gold standard for monitoring waterfowl populations in the United and Canada. It focuses on two large areas: the Prairie Pothole Region of the United States and Canada (known as the Traditional Survey Area), and the eastern Canadian provinces and the state of Maine (known as the Eastern Survey Area). Minnesota is not included in either area. The survey conducted in the Traditional Survey Area is considered the benchmark regarding the status of all grassland-nesting waterfowl species, including the Canvasback.

In 2015, the survey estimated the continental breeding population of Canvasbacks at 757,000 birds, 30% above the long-term average of 600,000 birds (Zimpfer et al. 2015). This number is also significantly higher than the continental goal of 581,000 birds established by the North American Waterfowl Management Plan (2004). There have been large fluctuations in population numbers since the survey began in 1955, but overall the numbers demonstrate a stable population trend (Figure 5). Although it is not a particularly robust monitoring tool for waterfowl, data collected by the federal Breeding Bird Survey (BBS) corroborates this stable trend across North America; in the most recent 10-year sampling period (2005–2015), there even is a relatively large, nonsignificant population increase of 3.65% per year (Sauer et al. 2017).

In Minnesota, the state waterfowl survey focuses primarily on the central and western regions of the state where waterfowl densities are highest. These data show that Canvasback populations have fluctuated widely but, on average, maintain a relatively stable trend line (Figure 6). The exceptions are the years 2005 and 2006, in which the abundance of many other waterfowl species also declined (Cordts 2015). One of the primary factors responsible was the weather. Most years the surveys are conducted in early May, but weather delays resulted in much of the survey (70% in 2005 and 80% in 2006) being conducted in late May, when leaf-out hinders detection from the air and when most migrants have already left the state (Cordts 2005, 2006). Some migrants are counted during most years of the survey.

In 2015, Canvasbacks comprised only 1.6% of Minnesota’s breeding waterfowl population (Cordts 2015). Federal BBS data from Minnesota, not entirely reliable for wetland species that are rarely encountered along BBS routes in the state, document a steadily increasing population since 1967 (Sauer et al. 2017).

Since at least the 1950s, Canvasback populations have demonstrated widely fluctuating populations throughout their range. They experienced a prolonged decline from 1982 to 1995, a time when most waterfowl populations were suffering from a protracted drought in the northern Great Plains. Other short-term fluctuations are largely considered a response to precipitation levels and wetland conditions (Mowbray 2002). Never a common species, Canvasbacks can be negatively impacted by harvest intensity; regulations, therefore, require tight management of this species. 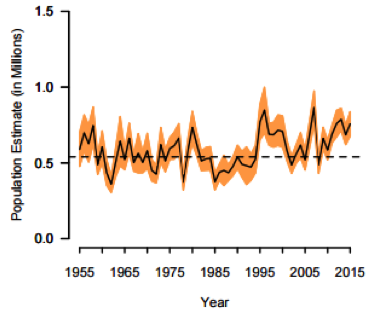 Population estimates for the Canvasback in the Traditional Survey Area, 1955–2015 (Zimpfer et al. 2015; dashed line is the NAWMP). 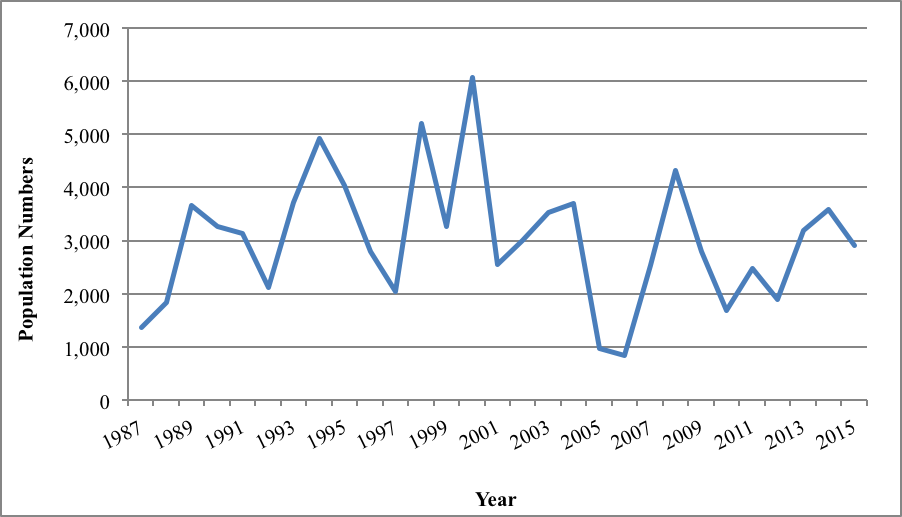 Canvasback numbers reported during the Minnesota Waterfowl Survey, 1987–2015 (data not corrected for visibility; taken from data presented in Cordts 2015).

In light of its small population, its wide population fluctuations, and its popularity among waterfowl hunters, the North American Waterfowl Management Plan (2004) has assigned the Canvasback a Moderately High Continental Priority. Partners in Flight (2017) assigned it a moderate Continental Concern Score of 10/20. Because of the importance of the Upper Mississippi River pools for migrating Canvasbacks, the Upper Mississippi River and Great Lakes Region Joint Venture has designated the Canvasback a high conservation priority and a focal species (Souilliere et al. 2007). Navigational pools 7 and 8, near La Crosse, Wisconsin, are significant fall staging areas for the entire North American Canvasback population.

Hunting is a major source of mortality for the population, and waterfowl managers track population levels closely, making frequent modifications to the harvest framework, including complete season closures. In 1994, the U.S. Fish and Wildlife Service outlined a harvest management strategy guided by three major objectives: (1) maintaining a breeding population of 500,000 birds, (2) permitting a larger sustained sport harvest than had been allowed prior to 1994, and (3) maximizing the fall harvest without causing the spring population to fall below the goal of 500,000 (Mowbray 2002). Population models that incorporate data from population surveys and the abundance of wetlands each spring are used to guide the regulatory framework.

Like all wetland-dependent species in Minnesota, the Canvasback will benefit from the aggressive conservation efforts underway by the Minnesota Prairie Conservation Plan (Minnesota Prairie Plan Working Group 2011) and the Minnesota Duck Recovery Plan (Minnesota Department of Natural Resources 2006). In particular, the latter plan aims to reverse the decline of all waterfowl populations in Minnesota by restoring and protecting an additional 2 million acres of habitat by the year 2056.

The impact of warming temperatures on the region’s wetlands, however, is a significant concern. Although the “State of the Birds 2010 Report on Climate Change” ranked the Canavasback’s vulnerability to climate change as low (North American Bird Conservation Initiative 2010), the potential loss of nearly two-thirds of the region’s wetlands is certain to have a devastating impact on the region’s entire suite of wetland-dependent species, including the Canvasback (North American Bird Conservation Initiative 2010; Minnesota Interagency Climate Adaptation Team 2013).

During the nonbreeding season, the Canvasback’s dependence on the rhizomes and tubers of aquatic plants, secured by probing wetland sediments, increases its ingestion of many contaminants, including spent lead pellets. Although lead shot is now prohibited for waterfowl hunting, its persistence in wetlands that are popular hunting spots harmed Canvasback populations for many years. More recent studies, however, suggest the incidence of lead shot ingestion is decreasing, one of many factors contributing to the species’ comeback (Baldassarre 2014).