A summer resident in Clay County only, formerly breeding in the state’s far western counties from Jackson to Marshall. A rare spring and fall migrant in western counties and a vagrant elsewhere. The Chestnut-collared Longspur was very rare during the Minnesota Breeding Bird Atlas (MNBBA).

Assigned a Continental Concern Score of 15/20 by Partners in Flight; the Chestnut-collared Longspur is officially listed as an Endangered Species in Minnesota and is identified as a Species in Greatest Conservation Need by the Minnesota Department of Natural Resources.

A short- to medium-distance migrant that winters in the Chihuahuan grasslands of north-central Mexico as well as in Arizona, New Mexico, western Oklahoma, and Texas.

A slight depression on the ground comprised of grasses; sometimes lined with feathers or animal hair. 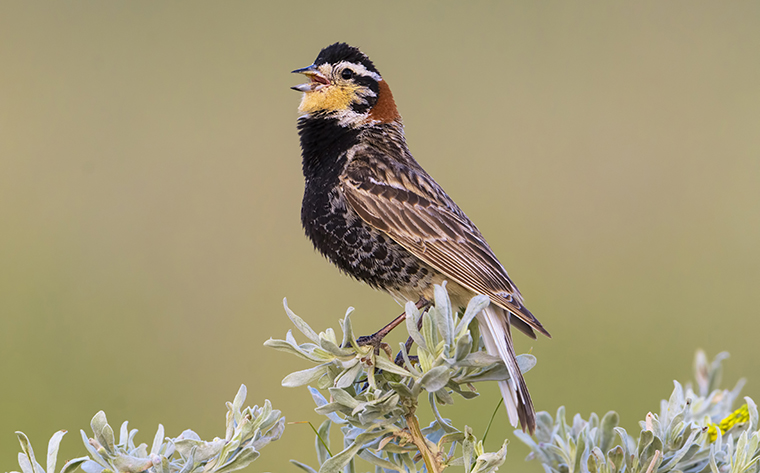 Breeding distribution and relative abundance of the Chestnut-collared Longspur in North America based on the federal Breeding Bird Survey, 2011–2015 (Sauer et al. 2017).

The Chestnut-collared Longspur is a prairie grassland specialist of the northern Great Plains. It was first collected in the spring of 1834 on the Platte River in western Nebraska by John K. Townsend, a leading naturalist from Philadelphia. The early history of the Chestnut-collared Longspur in Minnesota was well described by Roberts (1932), whose personal experience with this species started in 1879. Roberts first documented the species’ presence in the state when exploring the prairie in Grant and Traverse Counties with his friend Franklin Benner (Roberts and Benner 1880), where he found a nest and collected specimens (Krosch 1987). His description of the 1879 trip conveys the prairie scene before settlement and his surprise “to find the Chestnut-collared Longspur, previously known only from the plains farther west, an abundant breeding bird all over the dry upland prairies. In some sections it was so numerous as to outnumber all other birds together” (Roberts 1932). In the early 1880s he had further contact with the species while doing topographical surveys in eastern North Dakota.

In the early decades of the twentieth century, trips to western Minnesota by staff from the Bell Museum of Natural History (BMNH) produced only a few records from the northwestern counties and none from the southwest. By the 1920s, the high, dry, native rolling prairie of southwestern Minnesota was mostly settled, and only remnant populations of the Chestnut-collared Longspur were found on the uncultivated sandy beach ridges of Glacial Lake Agassiz that border the eastern Red River valley (in Norman, Pennington, and Polk Counties) (Roberts 1932). In the 1930s, 1940s, and 1950s, a few more locations with breeding birds were found and documented. The county locations of confirmed breeding records (with eggs or nestlings) in these early years are as follows: 1879 in Grant County (Roberts 1932); 1889 in Lac qui Parle County (Roberts 1932); 1898 in Jackson County (Roberts 1932); 1928 in Polk County (Roberts 1932); 1933 in Pennington County (Woolsey 1933); 1936 in Clay County, (June 23, reported fourteen miles east of Moorhead by L.E. Wagner; letter in Bell Museum of Natural History (BMNH) files); 1937 in Grant County (June 22–23, 3 miles northwest of Norcross; BMNH notes, Dinsmore); 1937 in Marshall County (Rysgaard 1937); 1942 in Wilkin County (Harrell 1942); 1949 in Clay County (south of Felton, T141R46 Sec. 33; Nelson 1949); and 1956 in Clay County (southeast of Averill; BMNH notes, Breckenridge and Warner).

In 1960, a birding trip by the Avifaunal Club stumbled on the Felton prairie complex and found a breeding colony of the Chestnut-collared Longspur with at least 25 displaying males (Huber 1960). The bird-watchers returned and documented a nest with young on June 17, 1961  (Pieper 1963) and documented a nest with four eggs on June 9, 1962 (Minnesota Ornithologists’ Union 2017). Ever since, yearly summer observations and some population surveys have been reported on this remnant population. The first survey was conducted in 1980 and estimated 65 pairs (Eckert 1980). More structured surveys were conducted in 1984 and 1985, which estimated a population of 234–262 birds (Wyckoff 1986a). These 1980s surveys were conducted mostly in the northwest quarter of Keene Township (atlas block T141R45d) and in the northeast quarter of Flowing Township (atlas block T142R45a).

Subsequently, seasonal reports in The Loon have indicated the species’ presence or its probable nesting at Felton Prairie every year from 1986 to 2014, but no monitoring of this population has occurred since the early 1980s. These observations are not specific about exactly where the species was seen at Felton Prairie, which covers three townships in Clay County (Felton, Flowing, and Keene). There is little doubt, however, that the breeding colony has declined to a few birds, with only 3–8 reported per year during the decade of 2005–2014. These recent observations appear to occur largely along the access via 170th Street North, a dirt track mostly in the southwest quarter of Keene Township (atlas block T141R45c).

Both the spring and fall migration of the Chestnut-collared Longspur is mostly confined to the western tier of counties, stretching south from Lake of the Woods to Jackson County, plus the adjacent counties of Kandiyohi, Renville, and Wadena. According to data from the MOU seasonal report (1961–2016), birds are more numerous in the spring (64 records in 14 counties) than in the fall for these western counties (25 records; all but one were from Felton and Clay Counties). The much-visited Felton prairie complex accounted for 67% of the spring reports and 96% of the fall reports. For 1961–2016, the spring migration occurred in April and May, with records from 50 years, but the fall migration records are spotty, with records from just 25 years and no records after 2006. There are very few records outside these western counties: 8 in the spring (Blue Earth, Dakota, Lake, and St. Louis Counties) and 2 in the fall (Aitkin and St. Louis Counties).

All 3 records reported during the MNBBA were on the Felton prairie complex in Clay County (Figure 2; Table 1). The records occurred on May 21, 2009 (confirmed nest with 4 eggs); July 25, 2011 (“possible”); and June 14, 2012 (“possible”). All observations were made at the traditional site for observing longspurs, along the dirt track (170th Street North) in the southwest quarter of Keene Township (on the western boundary of T141R45c). A query to the MOU web database for 2009–2013 turned up other records for this location, which was visited by many observers each year. Most observations just indicated the presence of the species or a count of 1–2 birds; the maximum count for each year was 4–5 birds. One observation on June 16, 2010, described a location in the northwest quarter of Keene Township (T141R45d). The observation was of one female carrying food (spotted twice), with a total of 4 birds at that site. 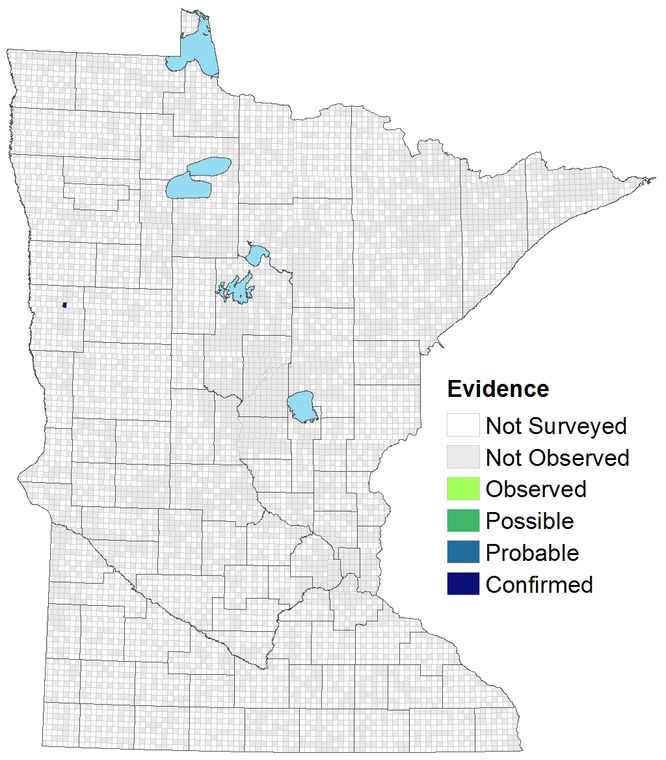 Breeding distribution of the Chestnut-collared Longspur in Minnesota based on the Breeding Bird Atlas (2009 – 2013).

Summary statistics for the Chestnut-collared Longspur observations by breeding status category for all blocks and priority blocks (each 5 km x 5 km) surveyed during the Minnesota Breeding Bird Atlas (2009-2013).

The Chestnut-collared Longspur breeds only on the dry prairies of the northern Great Plains; the bulk of the population is in the Canadian provinces and three of the Great Plains states: Montana, North Dakota, and South Dakota. The species preference is for short- to mixed-grass prairie on rolling landscapes with sparse, open vegetation (Figure 3). This vegetative structure can be found on native dry prairies or on sites that have been recently grazed, mowed, or burned. The species will also use mowed pastures or fallow fields with stubble but at much lower densities (Bleho et al. 2015). In a study in Felton Prairie, Wyckoff (1985) summarized that the Chestnut-collared Longspur preferred “well-drained sites away from trees and shrubs, in close-proximity to wet areas, where the vegetation was relatively short, sparse, and devoid of litter.” 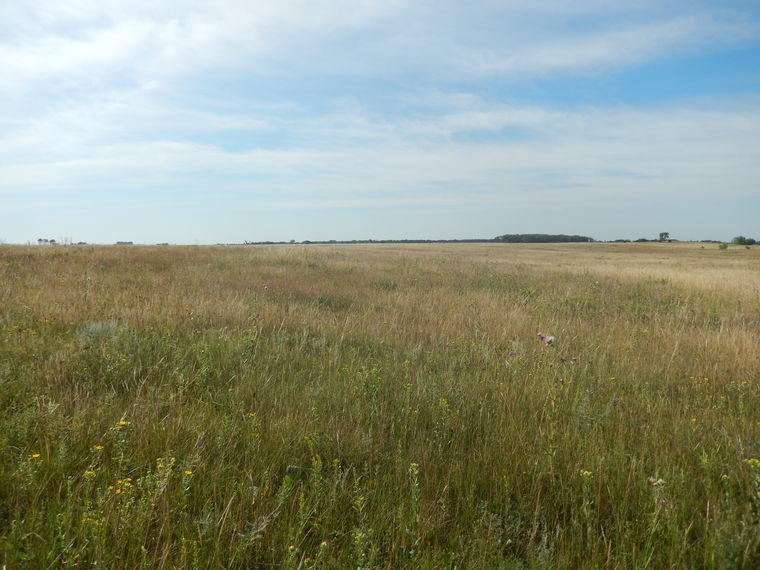 Typical breeding habitat of the Chestnut-collared Longspur (© Lee A. Pfannmuller).

Another estimate from 10 years earlier that also used data from the BBS gave a global population of 5.6 million birds (Pool and Austin 2006). It is difficult to assign reasons for the different estimates, but analytical methods probably play a role. However, an assessment of land-use change from 2009 to 2013 in the very large Mississippi River Basin-Great Plains area concluded that one-third of the area’s land had been converted from natural habitat to cropland and that the conversion of “grassland to cropland has accelerated over the past decade due to high crop prices, government incentives and a growing global human population” (Gage et al. 2016). 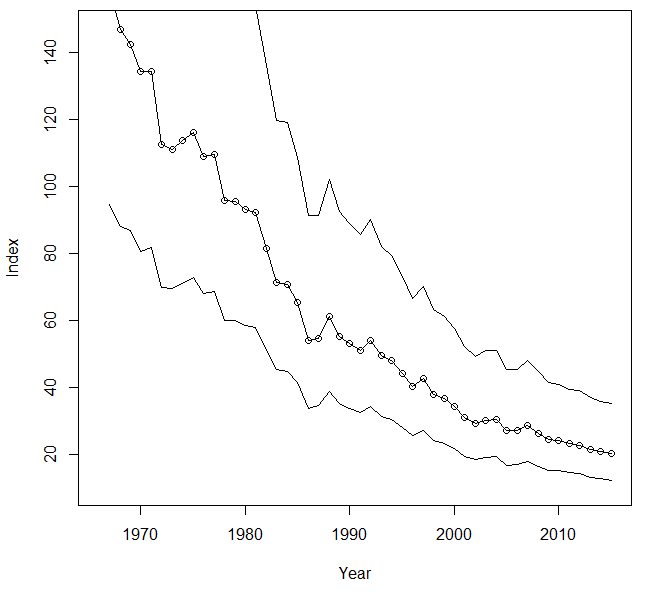 Breeding population trend for the Chestnut-collared Longspur in North America for 1966–2015 based on the federal Breeding Bird Survey (Sauer et al 2017).

With less than 1% of the native Minnesota prairie remaining, the Chestnut-collared Longspur was officially designated an Endangered Species in Minnesota in 1984 (Coffin and Pfannmuller 1988). It was recommended that the relict population on the Felton Prairie be “monitored annually for changes” (Minnesota Department of Natural Resources 2014). Unfortunately, that has not happened, nor has monitoring occurred on other identified breeding populations on protected prairie sites (Miller Prairie, Traverse County; Clinton Prairie SNA, Big Stone County; Prairie Coteau SNA, Pipestone County). The Committee on the Status of Endangered Wildlife in Canada designated the Chestnut-collared Longspur as Threatened in 2009 under the federal Species at Risk Act (SARA). The species is classified as Endangered in Manitoba under the province’s Endangered Species and Ecosystem Act. The reasons for designation under SARA were stated as, “The species is threatened by habitat loss and fragmentation from road development associated with the energy sector” (Committee on the Status of Endangered Wildlife in Canada 2009). This species is also on BirdLife International’s Red List category of Near Threatened, and this assessment found that “annual declines over the past decade (2005–2015) were most rapid in Alberta (−7.5%), Manitoba (−7.5%), and Wyoming (−8.2%).” based on federal BBS data from 2016 (BirdLife International 2017).

Other factors pose serious threats to the long-term future of the Chestnut-collared Longspur as well. One is its identification as a species most susceptible to collisions with communication towers (Longcore et al. 2013). It has also been identified as highly susceptible to future climate change and was classified as “climate endangered” by the National Audubon Society (2017). Based on its climate models, the society predicted that only 1% of the species’ summer range would be stable and that its summer range would decrease 98% by 2080. The society did predict that the winter range of this prairie- and grassland-loving species would substantially increase by 2080 (Langham et al. 2015; National Audubon Society 2017).