A regular summer resident and migrant; regular statewide during the winter. The Common Grackle was an abundant species during the Minnesota Breeding Bird Atlas (MNBBA).

Distributed across the eastern two-thirds of North America, the Common Grackle reaches its highest breeding densities in the northern Great Plains, including southwestern Minnesota, and across the Eastern Tallgrass Prairie, including the states of Illinois, Indiana, and Ohio (Figure 1).

Assigned a Continental Concern Score of 9/20 by Partners in Flight and designated a Common Bird in Steep Decline.

Breeding populations located in the northern states and southern Canada, as well as many western populations, are short-distance migrants that winter in the southern United States; southern populations are year-round residents. 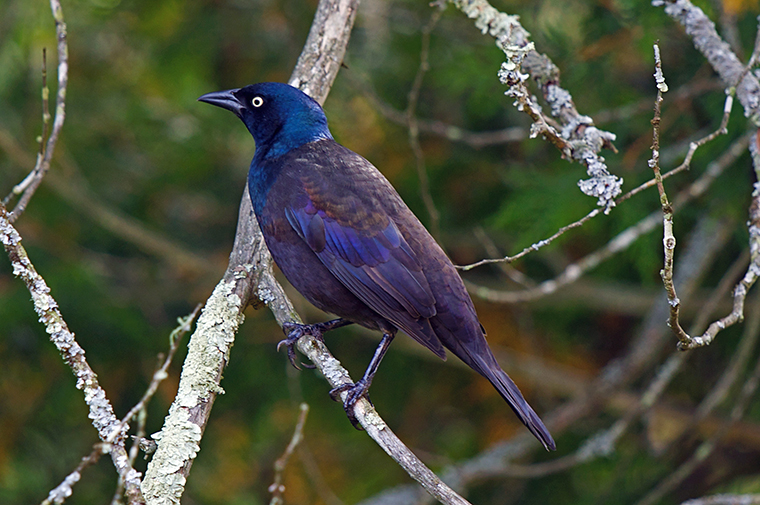 Breeding distribution and relative abundance of the Common Grackle in North America based on the federal Breeding Bird Survey from 2011 to 2015 (Sauer et al. 2017).

The handsome and well-adapted Common Grackle has long been a common summer resident of Minnesota’s open woodlands and agricultural landscapes. The conversion of Minnesota’s extensive western grasslands into productive agricultural fields provided the perfect setting for the grackle to exploit its opportunities even further. By June 1926, when Roberts took a trip across southern Minnesota, he found them to be the most abundant bird along the entire route (Roberts 1932):

It was constantly in sight and even at that season was in flocks, sometimes covering several acres when feeding in pastures and fields. Although the Grackle was known to have increased in numbers its great abundance was a surprise.

The Common Grackle had even become a very common bird in cities and parks. Confirmed nesting records (nests with eggs or young; flightless young) were available from 9 counties, including numerous records from Minneapolis in Hennepin County, as well as from Aitkin, Goodhue, and Isanti Counties in the eastern half of the state. Further west, records stretched from Jackson and Pipestone Counties in the southwest, north to Grant, Marshall, and Polk Counties. Although Roberts did not specifically address their abundance in northeastern Minnesota, the species was probably scarce across the region’s extensively forested landscape.

Green and Janssen (1975) would later note its sparse distribution in the northern forested counties but wrote that it was not restricted entirely to agricultural lands or urban areas. They observed that the brushy riparian shorelines of rivers and lakes, often some distance from settled areas, also provided suitable habitat. Janssen (1987) also documented its abundance within windbreaks separating agricultural fields and in cities where conifer plantings were common. He reported a total of 41 counties scattered across the state where nesting had been confirmed since 1970. By 1998, Hertzel and Janssen would report the species had been confirmed nesting in 48 counties. The Minnesota Biological Survey further confirmed its statewide distribution, including numerous breeding season locations found throughout the northeastern Arrowhead region (Minnesota Department of Natural Resources 2016).

During the MNBBA, participants reported 5,841 Common Grackle records in 58.1% (2,802/4,822) of the atlas blocks that were surveyed and in 72.2% (1,688/2,337) of the priority blocks. Breeding was confirmed in 21.3% (1,027) of all blocks surveyed (Figures 2 and 3; Table 1). The birds were reported and confirmed breeding in all 87 counties. With a few exceptions, they were reported from virtually every priority block south of a line that extends from the Fargo–Moorhead region in northwestern Minnesota southeast to the Twin Cities, basically following Interstate 94. Although they were broadly distributed north of this line, occurrences were reported from nearly 50% fewer blocks.

Clearly, the extensive clearing and development that has occurred in Minnesota’s northern forest has provided opportunities for the Common Grackle in the past 100 years. Yet, as the species expanded into northeastern Minnesota, the most significant change in its North American distribution in the twentieth century was its expansion westward. Facilitating this expansion was an increase in the number of shelterbelts, an ideal habitat for the species. As arid lands across the northern and central plains were irrigated and cultivated, shelterbelts became a more common feature across the landscape (Peer and Bollinger 1997). One only needs to encounter the cacophony of sounds emitted by a dense colony of nesting grackles in western Minnesota’s shelterbelts to appreciate the importance of this modified habitat to the birds. 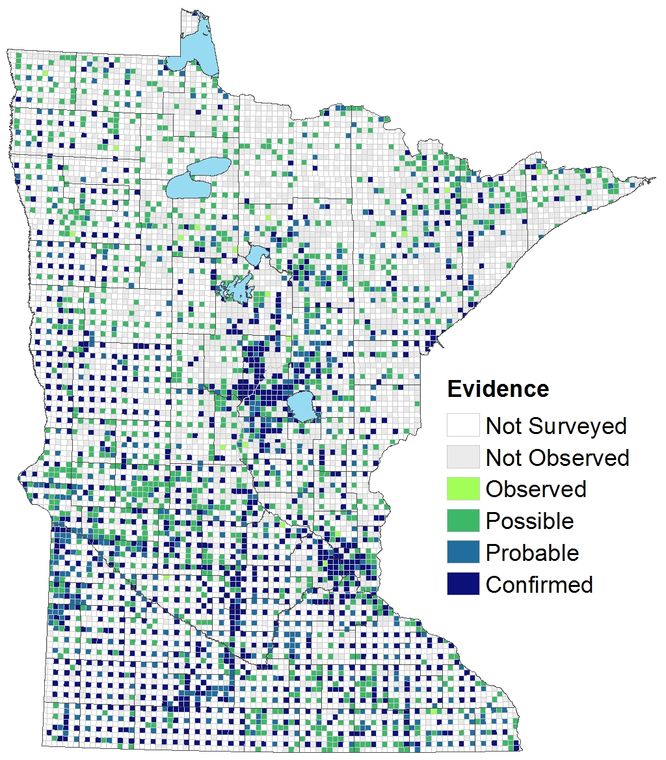 Breeding distribution of the Common Grackle in Minnesota based on the Breeding Bird Atlas (2009 – 2013).

Summary statistics of observations by breeding status category for the Common Grackle in Minnesota based on all blocks (each 5 km x 5 km) surveyed during the Breeding Bird Atlas (2009-2013).

Summary statistics for the Common Grackle observations by breeding status category for all blocks and priority blocks (each 5 km x 5 km) surveyed during the Minnesota Breeding Bird Atlas (2009-2013).

It is perhaps easier to describe what habitats the Common Grackle avoids than to list the wide variety of habitats it finds suitable. Although it is least abundant in densely forested landscapes, even here forest edges, clearings, riparian areas, and small settlements attract the birds to an otherwise unattractive landscape. During a 20-year songbird monitoring program on the Superior and Chippewa National Forests that focused exclusively on managed forest stands, grackles were observed but were extremely uncommon. An average of only 0.5 to 0.9 was detected on 100–10 minute, unlimited distance point counts. This compares to an average of 140 to 210 detections for one of the most common forest songbirds, the Red-eyed Vireo (Niemi et al. 2016).

Overall, grackles prefer any open, or partially open, landscape with scattered trees (Peer and Bollinger 1997). They are especially abundant in agricultural regions, where the combination of an abundant food source, open fields for foraging, and shelterbelts that provide nesting cover, offer the ideal combination of features for successful reproduction (Figure 4). Conifers are particularly attractive to grackles. They are frequently found in loose colonies of up to 200 breeding pairs in conifer windbreaks and shelterbelts (Kaufman 1996; Peer and Bollinger 1997). During the height of the breeding season, the harsh and squeaky calls of young grackles emanating from within a small nesting colony as they beg to be fed can be one of the most raucous scenes in an otherwise pastoral setting.

Habitat data collected from the MNBBA point counts illustrate the species’ strong preference for croplands and a variety of developed areas, such as small towns, cities, and parks (Figure 5). Indeed, the species responded very positively to the clearing of the eastern deciduous forest in the 1700s and 1800s. Today it continues its expansion west of the Mississippi as more lands are irrigated and more trees are planted. Prior to these changes, grackles were probably most common in the region’s semi-open, riparian habitat along rivers, streams, and lakes (Mumford and Keller 1984). Although the species is strongly associated with human-modified landscapes today, it can be found in riparian habitats some distance from development. 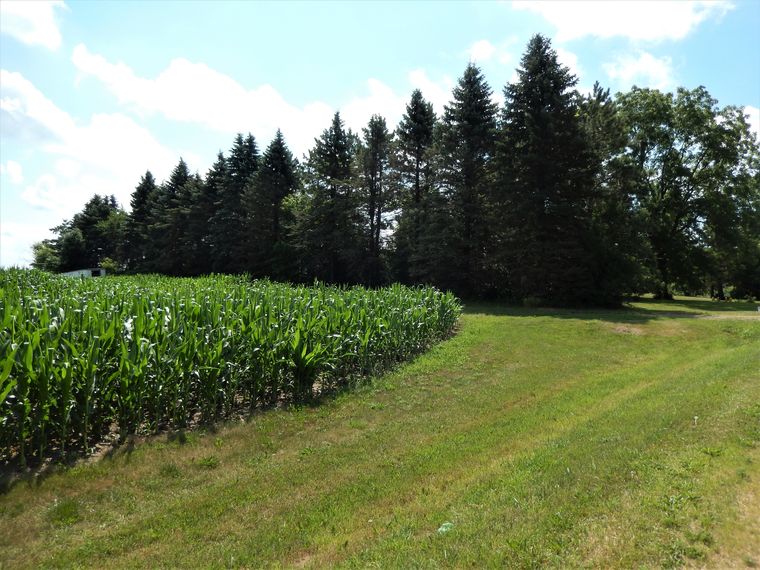 Typical breeding habitat of the Common Grackle in Minnesota (© Lee A. Pfannmuller).

Habitat profile for the Common Grackle based on habitats within 200 m of point counts where the species was present during the Minnesota Breeding Bird Atlas (2009-2013).

Southwestern Minnesota has some of the highest breeding densities of Common Grackles in the United States and southern Canada (Figure 1). It is not uncommon along BBS routes in this region to observe more than 100 birds along a 25‑mile route; indeed several routes in this region have reported as many as 200–300 birds per route. For many routes, however, the highest counts were reported 20–30 years ago, with numbers declining significantly in more recent years (Pardieck et al. 2017). Statewide, the average number of grackles observed on a BBS route each year is 74. Some of the highest densities were reported in the Eastern Tallgrass Prairie region (122 birds per route per year) and in the New England/Atlantic Coast region (125 birds per route per year) (Sauer et al. 2017).

Despite their abundance, Common Grackle populations have been declining quite steeply since wide-scale monitoring began in the 1960s. Across the United States and southern Canada, they have shown a statistically significant decline of 1.75% per year since 1966 (Sauer et al. 2017). This represents a cumulative decline of 54% from 1966 to 2014 (Rosenberg et al. 2016). In Minnesota the decline has been equally steep and statistically significant, averaging 2.03% per year since 1967 (Figure 6).

The species’ decline may be due in large part to its overwhelming success. Common Grackles are considered a major agricultural pest. Along with other members of the blackbird family, Common Grackles are responsible for millions of dollars of damage to a variety of crops each year, including corn, sunflowers, grains, and fruit. Collectively their damage just for sunflowers was estimated at $7 million to $10 million annually (Kleingartner 2003). Damage by blackbirds is cited as one of the primary reasons North Dakota farmers have reduced sunflower production by more than 75% since the 1970s (Klosterman et al. 2013).

Although they are a protected species under the Federal Migratory Bird Act, most blackbirds, including Common Grackles, can be taken legally without a permit when “they are causing serious injuries to agricultural or horticultural crops” (50 CFR §21.43—Depredation order for blackbirds, cowbirds, crows, grackles, and magpies). Indeed, an entire industry is built on the farmer’s need to control blackbirds. The success of these efforts over the years has had an impact on population numbers (Peer and Bollinger 1997). 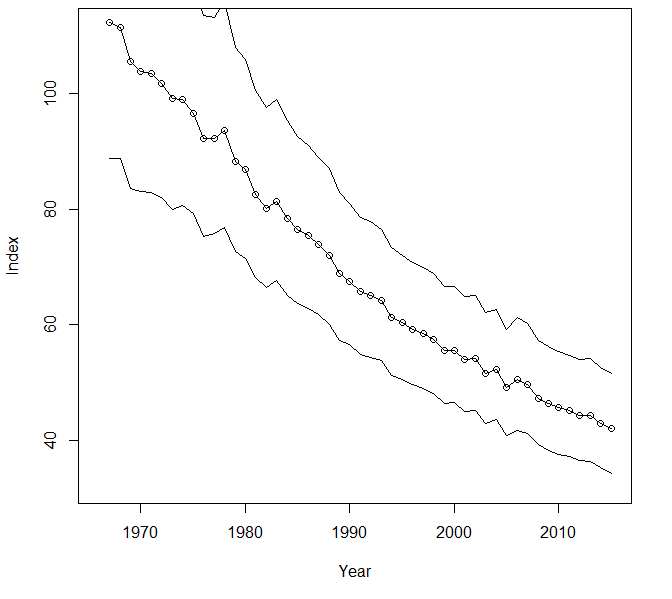 Breeding population trend for the Common Grackle in Minnesota from 1967-2015 based on the federal Breeding Bird Survey (Sauer et al. 2017).

As one of the most abundant species in North America, the Common Grackle has a continental conservation score of 9/20 (Rosenberg et al. 2016); its moderate ranking is influenced largely by its long-term population decline.  Preliminary assessments are that a warming climate also does not pose a threat to this species (North American Bird Conservation Initiative 2010). Despite a rather dramatic decline in abundance, its status as a major economic pest means that management is focused on damage control rather than on conservation. Its designation as a Common Bird in Steep Decline in 2016 (Rosenberg et al. 2016), however, is a call to closely monitor populations in the years ahead and not take this “common” species for granted.