A regular breeding resident and migrant; the Common Yellowthroat was a very abundant species during the Minnesota Breeding Bird Atlas (MNBBA).

The Common Yellowthroat’s breeding range stretches from the southeast coast of Alaska through the boreal forests and parklands of Canada. In the United States it occurs from the Pacific Northwest to the Atlantic Coast, but its distribution is spotty in the southwestern United States. Populations also occur further south in Mexico. High breeding densities occur in southeastern Canada and in the northern United States, from the Great Plains east across the Ohio River valley and New England (Figure 1). Within this core area the highest breeding densities are attained in central Minnesota.

An insectivore that gleans prey items from foliage, hovers to snatch items from the vegetation, or catches items in midair.

An open-cup nest usually located on or just a few centimeters above the ground; the structure may include a slight overhang or roof. In very wet habitats the nests are usually placed a bit higher to prevent flooding (up to 3 feet above the ground) and are anchored to the surrounding vegetation. 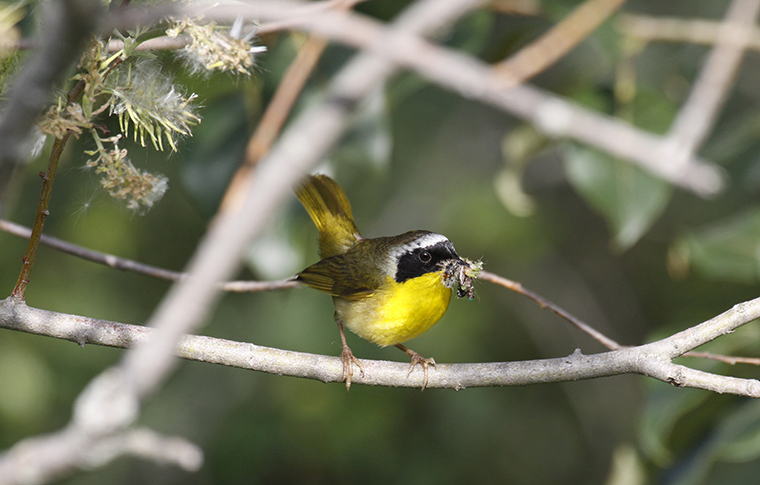 Breeding distribution and relative abundance of the Common Yellowthroat in North America based on the federal Breeding Bird Survey, 2011–2015 (Sauer et al. 2017).

Since Hatch first wrote his account of the Common Yellowthroat’s status in Minnesota in 1892, the species has been known to be widespread throughout all corners of the state. Even 40 years later, Roberts (1932) wrote:

Rare indeed would it be to find a bushy meadow by brook or lake-side, anywhere within the confines of our state, where the cheery and forcible ditty—witch-t-te witch-t-te—of the beautiful and animated little male Northern Yellow-throat would not greet the late spring and early summer visitor.

At the time of his writing, nesting had been confirmed(nests with eggs or young) in 8 counties across western and central Minnesota: Cass, Douglas, Grant, Hennepin, Isanti, Jackson, Otter Tail, and Pennington. Breeding was inferred in Goodhue and Scott Counties, where nests had been built or were under construction.

Little changed 40 years later, when Green and Janssen (1975) prepared an updated account of the species, noting that the little yellowthroat was the most “widespread and numerous warbler species in the state.” Janssen (1987) added that it was “probably one of the most evenly distributed breeding species in the state.” He included a statewide distribution map that identified 28 counties where the species had been documented nesting since 1970. Hertzel and Janssen (1998) later added 5 more counties to the list. The Minnesota Biological Survey further confirmed the species’ statewide abundance. Through 2014, the 4,616 breeding season locations the survey documented were more than the number of locations tallied for any other breeding bird in the state (Minnesota Department of Natural Resources 2016).

MNBBA participants reported a total of 9,609 Common Yellowthroat records in 80.6% (3,881/4,814) of the surveyed atlas blocks and in 95.5% (2,232/2,337) of the priority blocks. Breeding was confirmed in 291 blocks (Figures 2 and 3; Table 1). The birds were observed in all 87 Minnesota counties and were confirmed breeding in a total of 68 counties. Breeding was less frequently confirmed in the heavily cultivated counties south of the Minnesota River. The Common Yellowthroat was the second most abundant species during the MNBBA, second only to the American Robin, with 10,227 records.

In Minnesota little seems to have changed regarding the distribution of the Common Yellowthroat during the past hundred years. Today the Common Yellowthroat appears as widely distributed and as exceedingly common as it did in Roberts’s day. It is as likely to be found in an extensive prairie wetland in Rock County in southwestern Minnesota as it is to be found in a tiny, low-lying, wet opening in the forested landscape of St. Louis County in northeastern Minnesota. But despite its abundance, the significant loss of wetland habitat, especially in the southern and western regions of the state, has no doubt negatively impacted abundance levels. Nevertheless, the little yellowthroat still finds enough suitable habitat in Minnesota’s most intensely cultivated counties to thrive. The same is true throughout its breeding range, where few changes to its overall distribution have been noted (Guzy and Ritchison 1999). 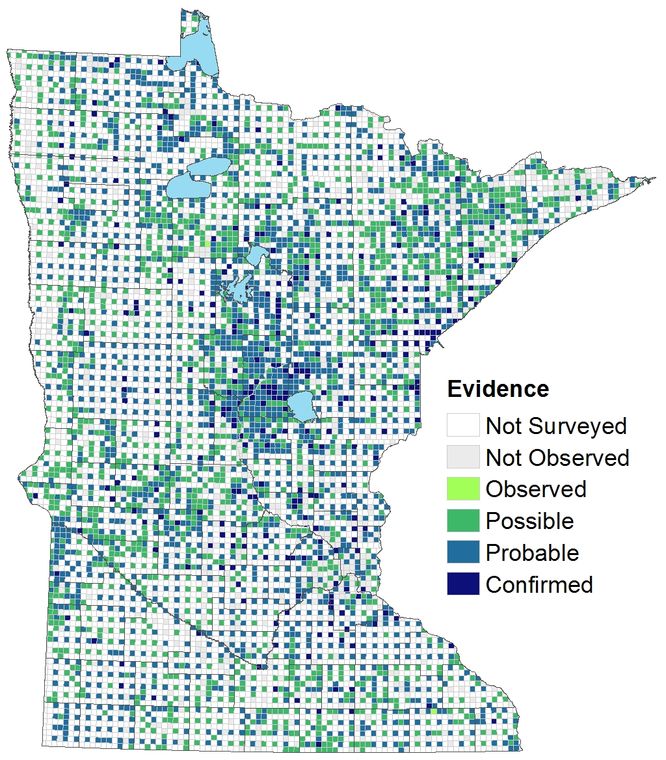 Breeding distribution of the Common Yellowthroat in Minnesota based on the Breeding Bird Atlas (2009 – 2013).

Summary statistics of observations by breeding status category for the Common Yellowthroat in Minnesota based on all blocks (each 5 km x 5 km) surveyed during the Breeding Bird Atlas (2009-2013).

Summary statistics for the Common Yellowthroat observations by breeding status category for all blocks and priority blocks (each 5 km x 5 km) surveyed during the Minnesota Breeding Bird Atlas (2009-2013). 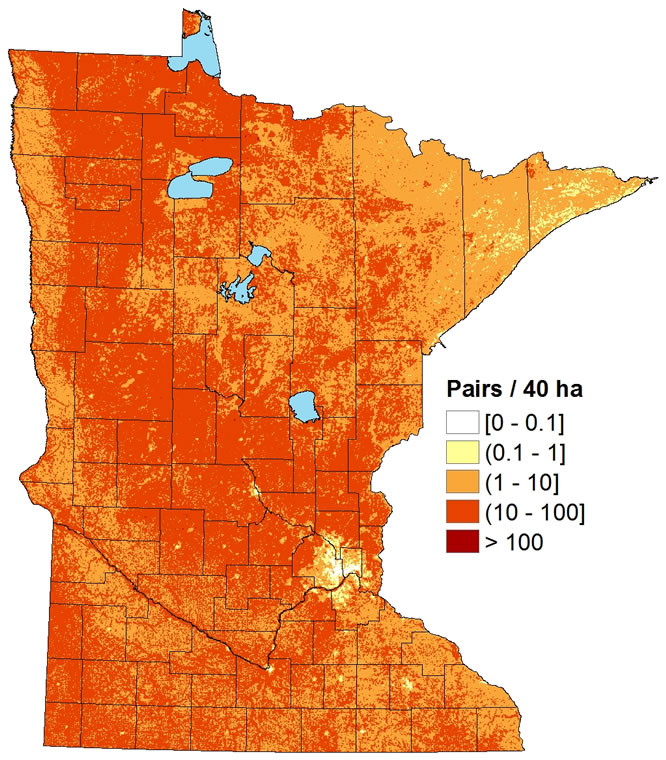 Predicted breeding distribution (pairs per 40 hectares) of Common Yellowthroat in Minnesota based on habitat, landscape context, and climate data gathered during the Minnesota Breeding Bird Atlas (2009-2013) using the General Linear Modeling method with an adjustment for detectability.

One of the reasons the Common Yellowthroat is such a successful species is that it is able to occupy a wide range of habitats. Although typically associated with marshes and shrubby wetlands (Figure 5), it also occupies nearly any patch of dense, low-lying vegetation. In northern Minnesota’s extensively forested landscape it can be found in young regenerating stands of conifers, in forested wetlands, in sedge wetlands, and in any mature upland forest where small pockets of wet shrubs are present (Danz et al. 2007; Niemi et al. 2016). The range of habitats within 200 m of MNBBA point counts where Common Yellowthroats were detected clearly illustrates why the species is considered a habitat generalist (Figure 6). Although it was most strongly associated with marshes and shrub wetlands, the birds also were reported from a wide variety of other habitats, including grasslands, bogs, and lowland conifers. 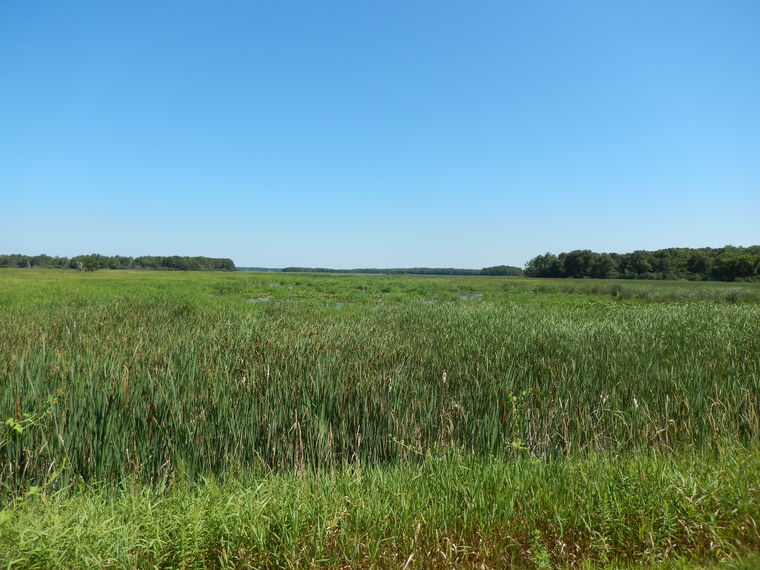 Typical breeding habitat of the Common Yellowthroat in Minnesota (© Lee A. Pfannmuller).

Habitat profile for the Common Yellowthroat based on habitats within 200 m of point counts where the species was present during the Minnesota Breeding Bird Atlas (2009-2013).

Data collected by the federal Breeding Bird Survey (BBS) were used to generate a global population estimate of 81 million breeding adults (Rosenberg et al. 2016). In 2013 Minnesota was estimated to support 6.5% of the North American population (Partners in Flight Science Committee 2013), which yields a current statewide estimate of approximately 5.3 million individuals. MNBBA point count data, however, generated a much higher statewide estimate of 14.7 million breeding adults (95% confidence interval of 14.2 to 15.4 million).

The importance of Minnesota to the Common Yellowthroat population is evident in Figure 1. In central Minnesota, where breeding densities are especially high, it is common to detect 50 or more yellowthroats on each BBS route. Statewide an average of 38 detections are reported per route, the highest anywhere in the United States. Local breeding densities are variable and can be quite high in prime habitat. In the Upper Midwest and Ontario, the average number of territories per 40 ha ranged from a low of just 7 in tallgrass prairies in Illinois to a high of 135 in bogs in Ontario (Guzy and Ritchison 1999). In northern Minnesota, breeding densities in the Chippewa and Superior National Forests averaged 5.8 pairs per 40 ha and 1.8 pairs per 40 ha, respectively (Niemi et al. 2016).

Although the Common Yellowthroat would appear to have a large, robust population, the BBS data reveal a slow but steadily declining population. From 1966 to 2015, the species experienced a significant annual decline of 1.01% per year throughout the BBS survey area (Sauer et al. 2017). Since 1970, the cumulative population loss has been 34% (Rosenberg et al. 2016). The decline has been slower but still significant in Minnesota, with an average annual decline of 0.59% (Figure 7). Data from the National Forest Bird (NFB) Monitoring Program on the Chippewa and Superior National Forests corroborates this trend line (Figure 8). Although the population trend is not significant in either forest, it certainly suggests a decreasing population from 1995 to 2016, particularly in the Chippewa.

When population trends are examined across the BBS survey area, Common Yellowthroats are declining throughout much of the eastern United States, the northern Great Plains, and in the Prairie Parklands of Canada. Localities where the birds are increasing are scattered throughout the west, from central British Columbia, south through Washington, Oregon, and California, and in the Central Plains and southern Texas (Figure 9).

Nest predation, parasitism by Brown-headed Cowbirds, collisions with communication towers and buildings, and weather all impact local populations (Guzy and Ritchison 1999; Longcore et al. 2013). But habitat loss and degradation are certainly the most important factors affecting this abundant little warbler. Although it is a habitat generalist, the Common Yellowthroat is most strongly associated with shrubby and herbaceous wetlands, habitats that have been under assault for decades as they were drained for agricultural production and urban/suburban development. Aggressive legislation to protect Minnesota’s wetlands was passed in 1991, but approximately 50% of the state’s original acreage had already been lost, with even higher percentages lost in the western and southern regions of the state (Kloiber 2010). An effort launched in 2006 to monitor the quality and quantity of wetlands statewide will provide better data in future years and help the Minnesota conservation community ensure that the No-Net Loss legislation passed in 1991 is effective and that wetland inhabitants are protected (Kloiber 2010). 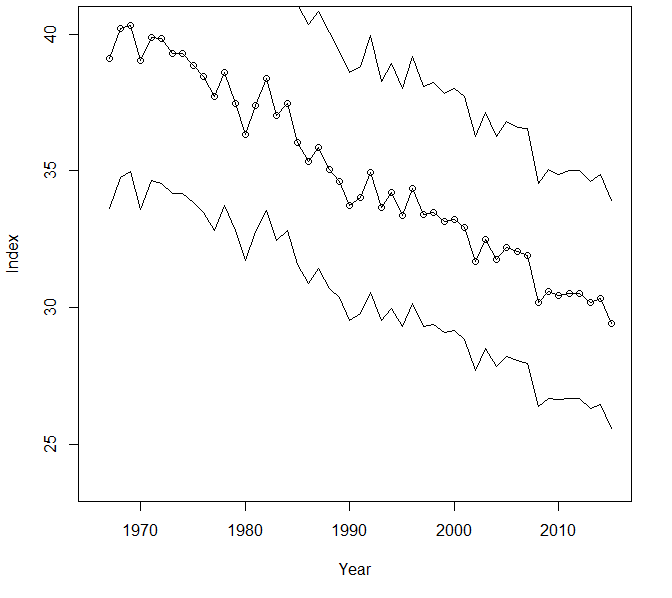 Breeding population trend for the Common Yellowthroat in Minnesota for 1967–2015 based on the federal Breeding Bird Survey (Sauer et al. 2017). 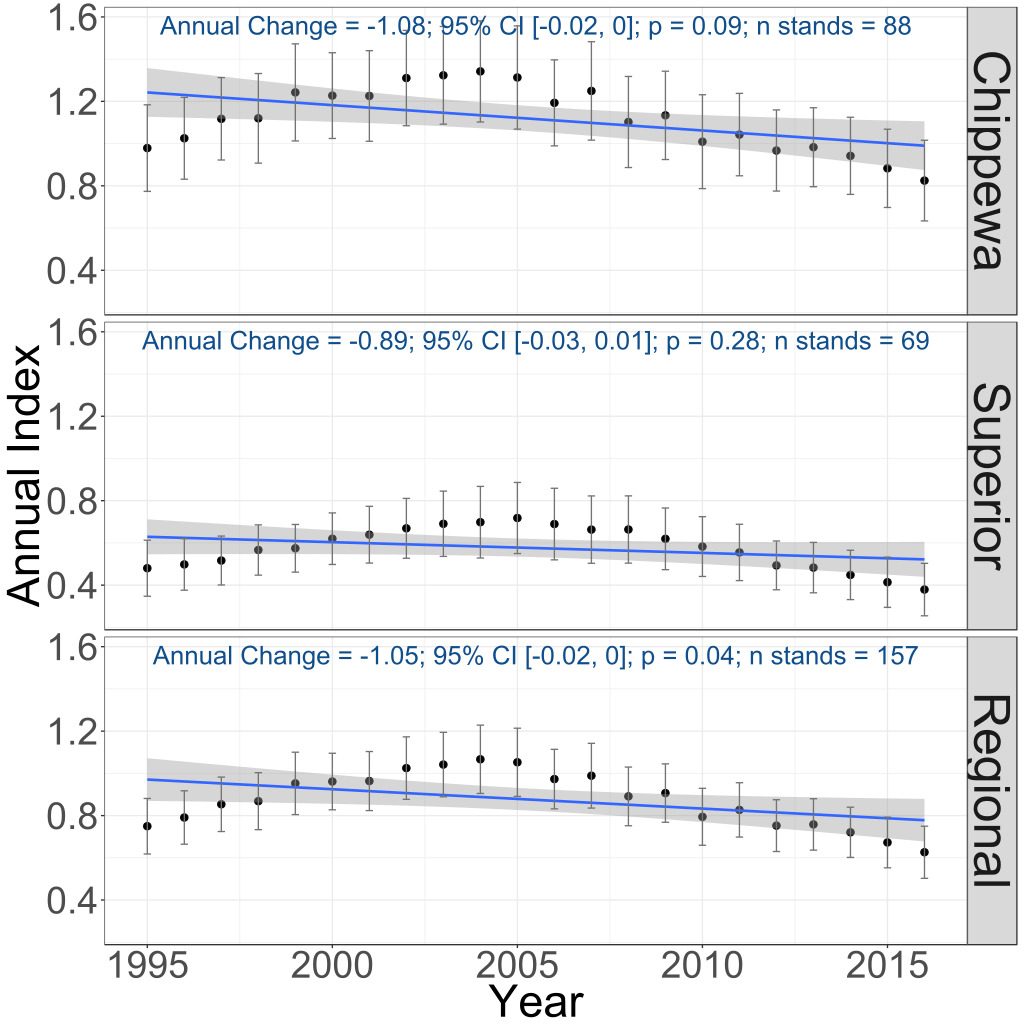 Breeding population trends of the Common Yellowthroat in the Chippewa and Superior National Forests and the combined regional trend, 1995–2016 (Bednar et al. 2016).

Although the Common Yellowthroat has been steadily declining over the past 50 years, it continues to be a widespread and abundant species. As a result, from a conservation perspective, yellowthroats do not rank as high as species with much smaller populations, unique habitat requirements, or significant threats. Partners in Flight has assigned it a Continental Concern Score of 9/20, influenced largely by concern regarding its long-term decline (Rosenberg et al. 2016). Even its vulnerability to climate change is considered low (North American Bird Conservation Initiative 2010).

Lacking specific management recommendations, the most important conservation measures that will benefit the Common Yellowthroat are those that target the protection and restoration of wetlands. In the grasslands region of the state, where wetland losses have been greatest, implementation of the Minnesota Prairie Conservation Plan (Minnesota Prairie Plan Working Group 2011), designed to protect and restore both wetlands and grasslands, will help ensure that Minnesota remains a stronghold for the Common Yellowthroat’s North American population for years to come.