The Downy Woodpecker can be found from southern Alaska across Canada to the Atlantic Coast, south to the Gulf Coast, and throughout all but the extreme southwest region of the United States. Breeding densities are highest in southern New England and in the southeastern United States (Figure 1). 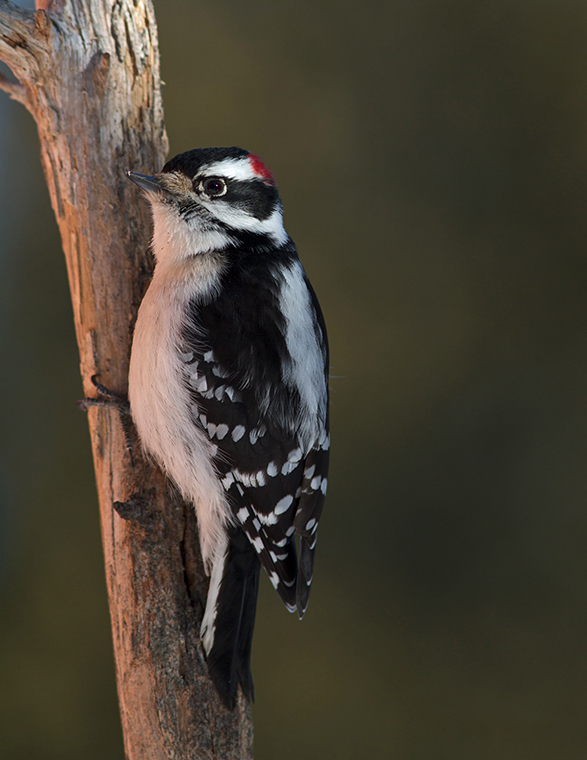 Breeding distribution and relative abundance of the Downy Woodpecker in North America based on the federal Breeding Bird Survey from 2011 to 2015 (Sauer et al. 2017).

Nearly 100 years ago, Roberts (1932) described the Downy Woodpecker, Minnesota’s smallest woodpecker, as a common, permanent resident throughout the state. In comparing its habits to that of the Hairy Woodpecker, he wrote, “It is not as partial to heavy timber as is the Hairy and is more frequently seen about orchards and wood-lots and in city streets and parks.” Confirmed nesting reports (nests with eggs or young) were available from Hennepin, Houston, and Isanti Counties and from Leech Lake.  Inferred nesting reports (nest excavation and adults carrying food) were available from Goodhue County and the Mille Lacs region.

Green and Janssen (1975) and Janssen (1987) also described the woodpecker as a common resident statewide. Both accounts, as well as Roberts (1932), mention the presence of two subspecies in the state, Picoides pubescens medianus (the Northern Downy) and P. p. nelson (Nelson’s Downy). The Northern Downy is the common, statewide resident; Nelson’s Downy occurs to the north, from Alaska to Ontario. P. p. nelson is a bit larger and is thought to be an occasional winter visitant to the state. Other than a review of 18 Minnesota Downy Woodpecker specimens conducted by the U.S. Biological Survey nearly 100 years ago, there is little specific information regarding the distribution of P. p. nelson in the state. The latter review found one definitive specimen taken from Hennepin County in the fall and three questionable ones taken at Fort Snelling in the spring.

Janssen’s 1987 account identified 34 Minnesota counties where nesting had been confirmed since 1970. Hertzel and Janssen (1998) added an additional 10 counties to the list, covering all regions of the state. To date, the Minnesota Biological Survey has documented a total of 699 breeding season locations, again broadly distributed statewide wherever survey work has been completed (Minnesota Department of Natural Resources 2016).

During the MNBBA, observers reported a total of 2,724 Downy Woodpecker records in 36.5% (1,730/4,745) of the surveyed atlas blocks and in 49.1% (1,147/2,337) of the priority blocks. Breeding evidence was documented in 301 surveyed blocks (Figures 2 and 3; Table 1). The birds were observed in all 87 Minnesota counties, and breeding evidence was gathered in 71 counties; 4 counties were included along the upper Minnesota River valley because of blocks that straddled counties (Brown, Redwood, Renville, and Yellow Medicine). Thirty-three of these counties were additions to the list published by Hertzel and Janssen in 1998. Records were truly statewide in distribution, including from some of the most intensively cultivated regions of the state. Among the nine woodpecker species that inhabit Minnesota, the diminutive Downy was the third most commonly reported species during the MNBBA, exceeded only by the Northern Flicker and the Yellow-bellied Sapsucker. It is, however, the most common woodpecker in eastern North America (Jackson and Ouellet 2002).

Over the years, the extent of the Downy Woodpecker’s distribution in the state appears to have changed very little. It may be more abundant in the southern and western edges of the Laurentian Mixed Forest Province, where residential and industrial development have replaced much of the forested landscape. Elsewhere in its breeding range there are few data to suggest that there have been any major distributional changes (Jackson and Ouellet 2002). 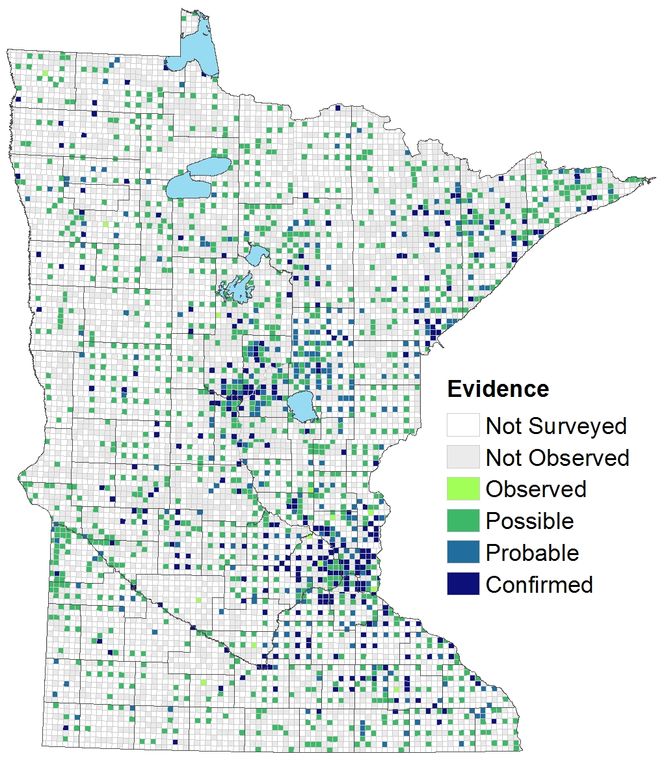 Breeding distribution of the Downy Woodpecker in Minnesota based on the Breeding Bird Atlas (2009 – 2013).

Summary statistics of observations by breeding status category for the Downy Woodpecker in Minnesota based on all blocks (each 5 km x 5 km) surveyed during the Breeding Bird Atlas (2009-2013).

Summary statistics for the Downy Woodpecker observations by breeding status category for all blocks and priority blocks (each 5 km x 5 km) surveyed during the Minnesota Breeding Bird Atlas (2009-2013).

The Downy Woodpecker occupies a wide variety of habitats that are generally characterized by more open canopies in both upland and lowland forests and in both deciduous and mixed forests (Figure 4). The species is frequently found in forest edges and open woodlands; its dependence on mature trees for nesting and foraging precludes its use of the earliest successional stages of forest communities. The woodpeckers’ general requirements, however, are easily met in many human-modified landscapes including orchards, city parks, and residential areas. Even farm shelterbelts and small woodlots can provide sufficient habitat if mature trees are present. Although the availability of suitable trees for roosting and nesting may be a limiting factor, the woodpeckers’ small size allows them to use limbs as small as 10 cm in diameter for excavating cavities. Ample habitat opportunities are thus available wherever there are trees (Jackson and Ouellet 2002).

In Minnesota’s forested landscape the species is found in low numbers in a wide variety of forest communities. A long-term study of birds on the national forests in Minnesota and Wisconsin documented their occurrence in many different upland and lowland hardwood stands as well as in wetland communities with scattered trees and snags. With the exception of hemlock stands in Wisconsin, they did not use coniferous forest stands. They were most frequently associated with oak forest stands (Niemi et al. 2016).

Atlas data collected in Minnesota were used to characterize the Downy Woodpecker’s habitat preference statewide across Minnesota (Figure 5). Within 200 m of each point count where Downy Woodpeckers were detected, the species showed the strongest affinity for oak woodlands, followed by pine-oak barrens, northern hardwoods, and residential woodlots (i.e. developed habitats). 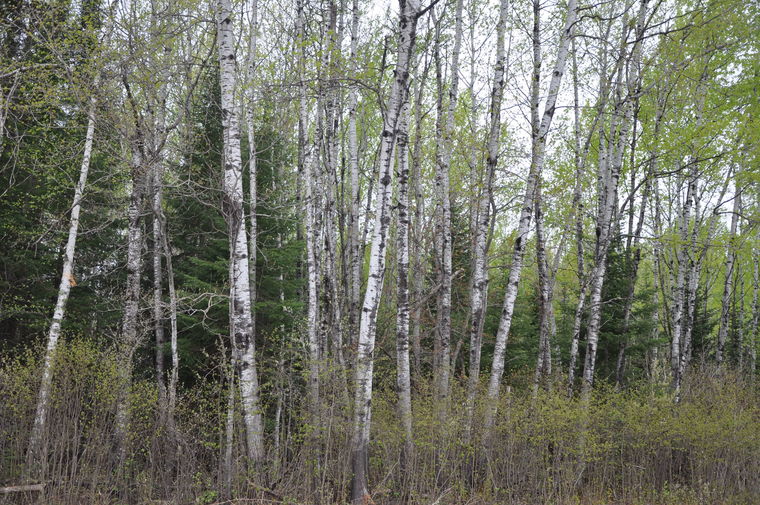 Habitat profile for the Downy Woodpecker based on habitats within 200 m of point counts where the species was present during the Minnesota Breeding Bird Atlas (2009-2013).

Data collected by the federal Breeding Bird Survey (BBS) have been used to generate a 2016 population estimate of 13 million Downy Woodpeckers in North America (Rosenberg et al. 2016). A few years earlier Minnesota was estimated to support 1.7% of the continental population (Partners in Flight Science Committee 2013). When that percentage is applied to the current population estimate, Minnesota is projected to support approximately 220,000 breeding adults.

Although the species can be found across North America, breeding densities are highest in the southeastern United States and in southern New England (Figure 1). Along BBS routes in Minnesota, observers have recorded an annual average of approximately 1 Downy Woodpecker per route each year; in the mid-Atlantic coastal region of New England, the average number of birds per route was 4 and ranges from 2 to 3 in most southeastern states (Sauer et al. 2017).

In northern Minnesota, forest birds have been closely monitored on the national forests since the early 1990s. On the Chippewa National Forest, from 1995 to 2010, surveyors detected an average of 3.30 Downy Woodpeckers on 100 unlimited radius, 10 minute point counts; on the Superior National Forest they detected an average of 2.23 woodpeckers. This compares to an average of 26.08 Yellow-bellied Sapsuckers on the Chippewa and 22.17 sapsuckers on the Superior, the most common woodpecker in the northern forest region (Niemi et al. 2016).

Since the BBS began in the mid-1960s, Downy Woodpecker populations have demonstrated a stable to slightly increasing population trend when examined across their breeding range (Figure 6). Partners in Flight estimated the population has increased 8% since 1970 (Rosenberg et al. 2016). The species’ relatively low abundance in Minnesota generates a trend line with less precision, but it is nearly identical to the trend line evident at the national level (Sauer et al. 2017). There are pockets throughout the species’ breeding range where populations may be increasing or decreasing, but the level of change per year (both positive and negative) in most regions is less than 1%.

The regional decline in Downy Woodpeckers likely reflects broad land-use changes. The Downy Woodpecker is a species of more open and fragmented forests. In northern Minnesota such habitats are created by natural disturbances, such as windstorms and fire, and by timber management activities. Since the national forest bird monitoring program began in the early 1990s, the level of timber harvest has consistently declined on both of Minnesota’s national forests (Niemi et al. 2016). An aging forest landscape might provide less suitable habitat for the Downy Woodpecker. On the other hand, an older forest should provide an abundance of aging aspen trees with heartrot that are suitable for excavating nest cavities. Further work is necessary to assess the factors responsible for the species’ decline. 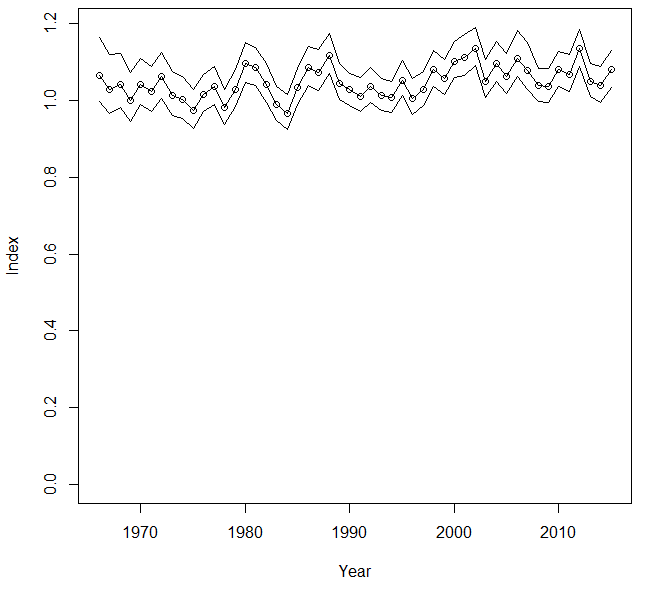 Population trend map for the Downy Woodpecker in North America from 1966-2015 based on the federal Breeding Bird Survey (Sauer et al. 2017). 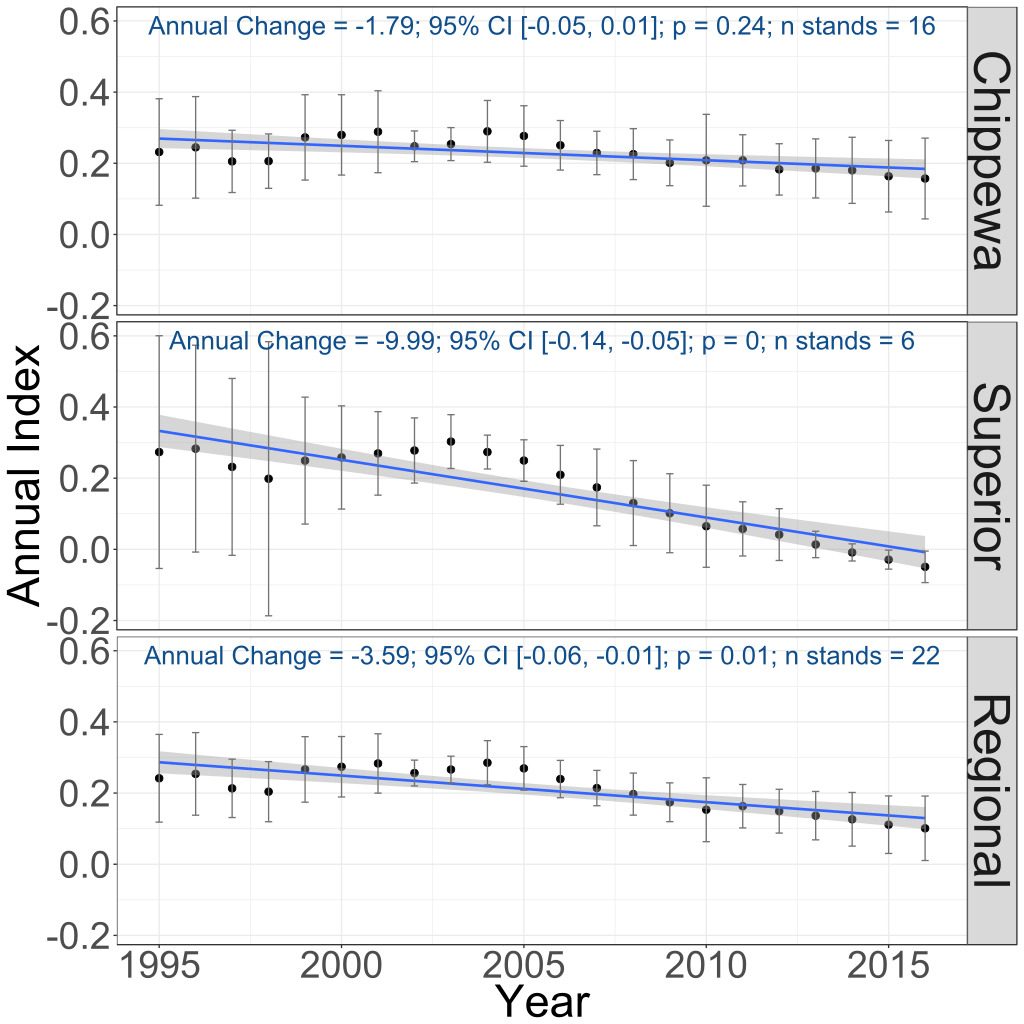 Breeding population trends of the Downy Woodpecker in the Chippewa and Superior National Forests of Minnesota from 1995-2016 (Bednar et al. 2016).

Widely distributed with a long-term stable population, the Downy Woodpecker is not considered a conservation priority by Partners in Flight and has been assigned a relatively low Continental Concern Score of 7/20 (Rosenberg et al. 2016).

This adaptable little species, familiar to all who enjoy feeding backyard birds, is quite adaptable. Only broad-scale alterations to the habitat, such as that observed in northern Minnesota, likely have a significant impact on overall population abundance. Although few in-depth assessments of its potential response to climate change have been conducted, a preliminary examination has rated its vulnerability as very low (North American Bird Conservation Initiative 2010).

Specific management recommendations are limited. With respect to populations in Minnesota’s extensive northern forests, forest management plans that ensure the availability of mature deciduous trees with heartrot fungus are important for the species’ long-term sustainability (Danz et al. 2007). The soft interior of these trees is ideal for cavity excavation. A habitat suitability model prepared for the species suggests that optimal habitat is provided by forest stands with a basal area of 10 to 20 m2 per ha and with five or more snags greater than 15 cm dbh per 0.4 ha (Jackson and Ouellet 2002). An earlier study recommended providing 320–400 snags per 40 ha that range in size from 15 to 25 cm dbh and average 3 to 9 m high (Evans and Conner 1979).

The sentiments expressed by many 19th century naturalists ring true today. The little Downy Woodpecker, one of our most familiar year-round residents, is a “model of patient industry and perseverance,” qualities that will serve it well into the future regardless of any uncertainties (Bent 1939).