A regular breeding species and migrant, rare in winter. The Eastern Phoebe was a common species during the Minnesota Breeding Bird Atlas (MNBBA).

Broadly distributed across central and eastern North America, the Eastern Phoebe occurs as far north as the southern regions of the Yukon and the Northwest Territories and as far southeast as Texas and portions of Louisiana, Mississippi, Alabama, and Georgia. The species does not attain high breeding densities anywhere within its range, but overall it is most abundant east of the Great Plains (Figure 1).

Assigned a Continental Concern Score of 8/20 by Partners In Flight.

A migrant throughout much of its range, the phoebe is a year-round resident in the southeast. Winters are spent along the southern Atlantic Coast, the Gulf Coast, and in eastern Mexico.

An open cup with a base of mud and then built up with leaves, grasses, and moss. Although natural sites, such as steep stream banks or rocky outcrops, are still used, it is common to find nests built on human structures such as bridges, culverts, or buildings. 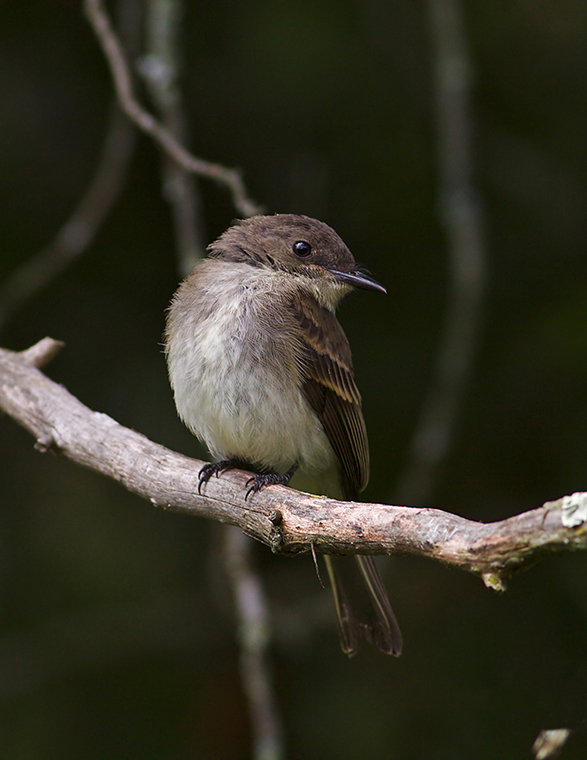 Breeding distribution and relative abundance of the Eastern Phoebe in North America based on the federal Breeding Bird Survey from 2011 to 2015 (Sauer et al. 2017).

Roberts (1932) considered the phoebe a common summer resident throughout the state. Commenting on its close and long-standing association with people, Roberts wrote:

Nearly everyone knows this plainly dressed little bird by one name or another, as it comes so familiarly about man’s habitations and mingles its home activities so intimately with those of its host. There is scarcely a farm or dwelling in the country or a deserted shack in the forest that has not its pair of sociable, tail-wagging Phoebes.

Even the long list of nesting records submitted by friends and colleagues throughout the state were a testament to the ease of documenting nesting efforts by a bird often sharing one’s home as a nesting abode. All total, Roberts had breeding evidence (both confirmed and inferred nesting accounts) from 17 counties as well as from Cass Lake, Itasca State Park, and Leech Lake. The records were confined primarily to the forested regions of the state, including the Tallgrass Aspen Parklands Province, and stretched from Houston County in the southeast to Kittson and Roseau Counties in the northwest, Lake of the Woods in north-central Minnesota, and Carlton and St. Louis Counties in the northeast. At the time, the absence of records from the southwest or extreme northeast regions suggested that the species was relatively uncommon in the open grasslands and sparsely settled forest landscapes.

Green and Janssen (1975) described the phoebe as a summer resident breeding in all regions of the state. Janssen (1987) provided additional details, noting that the species was most common in northern Minnesota, decreasing in abundance as one moved south, and “scarce to absent in large portions of the south-central and southwestern regions south of the Minnesota River.” He included a distribution map that identified 42 counties where nesting had been confirmed since 1970, including 3 in the southwestern corner of the state (Lac qui Parle, Pipestone, and Yellow Medicine). Hertzel and Janssen (1998) would later add 12 more counties to the list. More than half of the counties without confirmed nesting records (18) were south of the Minnesota River.

During the MNBBA, observers reported 2,809 Eastern Phoebe records from 37.6% (1,789/4,763) of the surveyed atlas blocks and from 49.9% (1,167/2,337) of the priority blocks. Breeding evidence was documented in 651 blocks (Figures 2 and 3; Table 1). There was at least one record from each of Minnesota’s 87 counties and breeding evidence from 81 counties (one block with breeding evidence straddled both Renville and Redwood Counties). The 6 counties without breeding evidence were all in west-central and southwest Minnesota: Big Stone, Chippewa, Lyon, Nobles, Pipestone, and Traverse. Of the counties with confirmed nesting records, 29 were new to the list published by Hertzel and Janssen (1998). Although widely distributed across the state, the Eastern Phoebe was least abundant in the Prairie Parkland Ecological Province.

The predicted distribution map for the Eastern Phoebe, which combines MNBBA data with data on climate, habitat, landscape context, and detectability, demonstrated the species’ close association with major rivers, especially in southeastern Minnesota (Figure 4). A species primarily of the Eastern Broadleaf Forest and the southern and western regions of the Laurentian Mixed Forest, the map predicts the species absence from some of the most densely forested landscapes of Cook and Lake Counties..

The overall distribution of the phoebe may have changed little in the past one hundred years. Nevertheless, today it likely is more common across Minnesota’s agricultural and northern forested landscapes. Historically the species’ distribution and abundance was limited by the availability of natural nest sites, including rocky outcrops and ledges located near forested streams and lakeshores. Roberts’s account (1932) actually included a photo of three phoebe nests that were placed within the crevices of Barn Bluff in Red Wing, Minnesota, in the early 1900s. He also noted the species’ use of rocky ledges along the North Shore of Lake Superior. But European settlement, and the subsequent construction of buildings and bridges, provided more nesting opportunities for this adaptable species. As settlement progressed to the west and north of its breeding range, farmsteads and riparian corridors also provided the woodlands, water, and nearby structures that the species requires. This facilitated its expansion into the northern Great Plains and along the Gulf Coast of the southeastern United States (Weeks 2011). 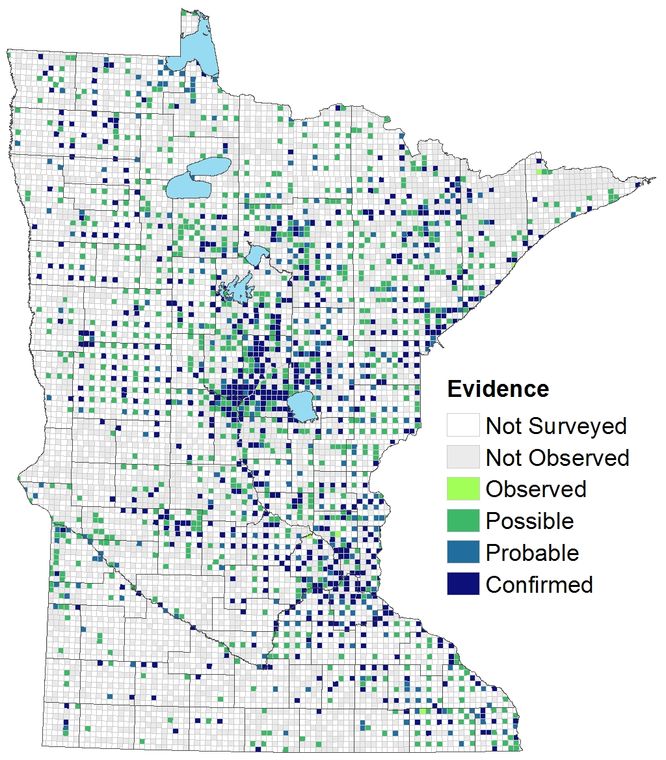 Breeding distribution of the Eastern Phoebe in Minnesota based on the Breeding Bird Atlas (2009 – 2013).

Summary statistics of observations by breeding status category for the Eastern Phoebe in Minnesota based on all blocks (each 5 km x 5 km) surveyed during the Breeding Bird Atlas (2009-2013).

Summary statistics for the Eastern Phoebe observations by breeding status category for all blocks and priority blocks (each 5 km x 5 km) surveyed during the Minnesota Breeding Bird Atlas (2009-2013). 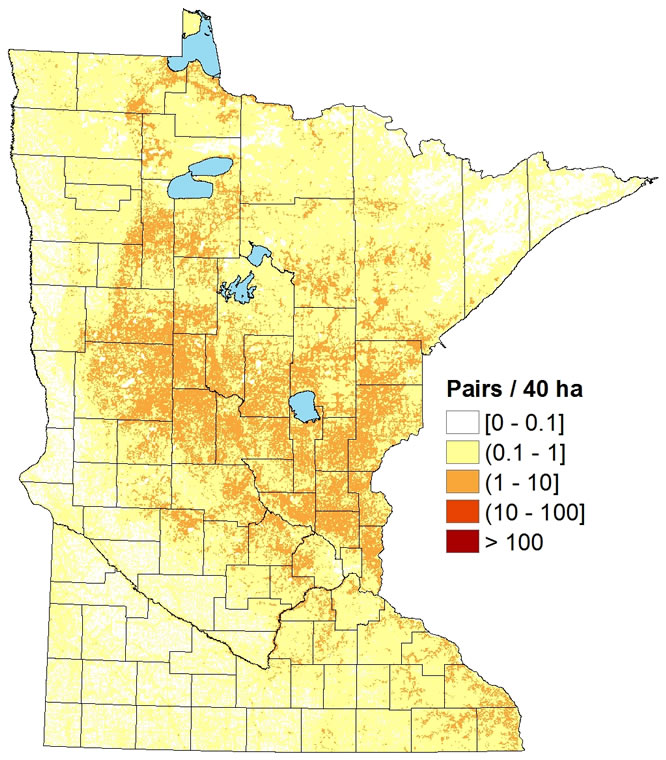 Predicted breeding distribution (pairs per 40 hectares) of the Eastern Pheobe in Minnesota based on habitat, landscape context, and climate data gathered during the Minnesota Breeding Bird Atlas (2009-2013) using the General Linear Modeling method with an adjustment for detectability.

The Eastern Phoebe occupies a wide range of habitats, from woodland edges, rural farmsteads, and bridges to rocky ravines, lakeshores, and stream banks (Figure 5). As noted previously, the most limiting factor for breeding is the availability of suitable nesting sites. Specifically, the birds need a structure, natural rock outcropping, or stream bank that provides some protection from predators and inclement weather (Weeks 2011). As a result, many nests are located on lakeshore cabins and homes.

Once found, the sites usually share at least two other features: they are in the vicinity of water, and trees and woodlands are nearby (Weeks 2011). A diverse understory of small trees and shrubs seems particularly important, as the small limbs and branches are frequent perching sites used by this aerial insectivore to scout for prey. Decalesta (1994) found that woodlands where the understory was heavily grazed by deer supported fewer phoebe nesting pairs. The birds are relatively uncommon, however, in extensive forest landscapes except around small towns and cities that provide buildings or bridges with suitable nesting substrates.

Figure 6 illustrates the close association of the Eastern Phoebe with a wide range of communities within 200 m of MNBBA point counts where the species was detected. As long as water and suitable nest sites are nearby phoebes are habitat generalists. 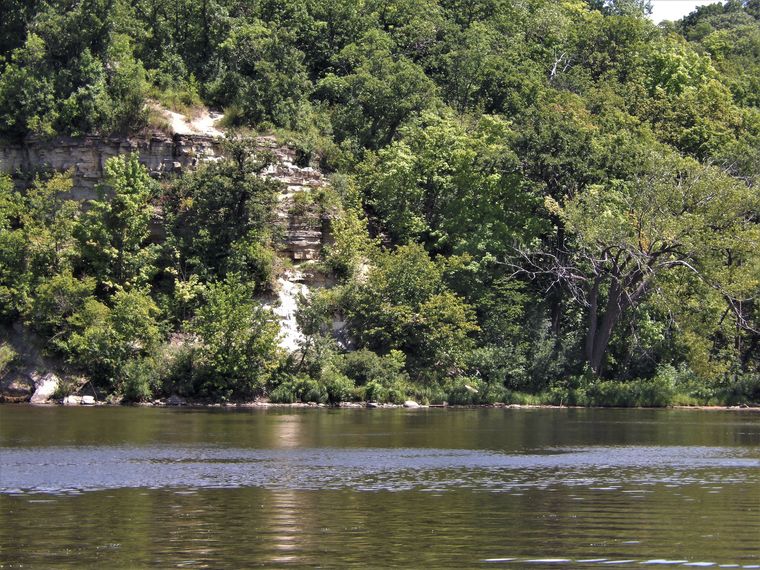 Typical breeding habitat of the Eastern Phoebe in Minnesota (© Lee A. Pfannmuller).

Habitat profile for the Eastern Phoebe based on habitats within 200 m of point counts where the species was present during the Minnesota Breeding Bird Atlas (2009-2013).

Since the BBS began monitoring birds in the mid-1960s, the population of the Eastern Phoebe has remained relatively stable, even increasing slightly. This is particularly true within the United States, where populations have demonstrated a significant annual increase of 0.86% per year. The long-term population trend in Minnesota is nearly identical, with a nonsignificant trend line that suggests a slight upward trend (Figure 7). Overall, the national data indicated populations have increased 29% since 1970 (Rosenberg et al. 2016).

The only notable and rather sudden change in North America population levels was observed following the winter of 1976–1977. A long stretch of subfreezing temperatures in the southeastern United States, the northern portion of the species’ winter range, resulted in a significant loss of phoebes and a subsequent decline in breeding populations in the eastern and central regions of North America. The impacts were most severe on phoebes that nested in the core of the species’ breeding range, stretching from Maryland north through New England. Although the population recovered slowly, the impacts were noticeable for several years (Robbins et al. 1986). 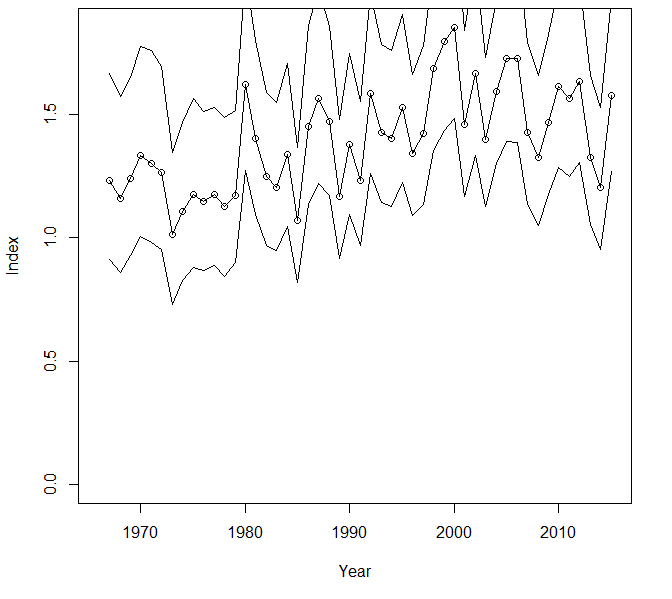 Breeding population trend for the Eastern Phoebe in Minnesota for 1967–2015 based on the federal Breeding Bird Survey (Sauer et al. 2017).

Given its stable population, its relatively large population size, and its adaptability to human-modified landscapes, the Eastern Phoebe is not considered a conservation priority at either the state or federal level. It has been assigned a relatively low Continental Concern Score of 8/20 by Partners in Flight (Rosenberg et al. 2016). No immediate threats to the species’ future are foreseen. Even the 2010 State of the Birds report (North American Bird Conservation Initiative 2010) ranked the species as having a low vulnerability to climate change. The Eastern Phoebe is likely to remain a common, and often endearing, member of Minnesota’s avifauna for years to come.