A regular breeding resident and migrant; the Green Heron was an uncommon species during the Minnesota Breeding Bird Atlas (MNBBA).

The Green Heron is primarily a species of the eastern United States and the Pacific Coast. Populations extend north into British Columbia on the West Coast and into southern Ontario, Quebec, New Brunswick, and Nova Scotia in the east. Farther south, populations can be found through portions of Central America. During the breeding season, the Green Heron avoids the dry interior of the western United States and Central America. Non-migratory populations occur along the southern coasts, throughout the Caribbean, and along the coasts of Central America. Sparsely distributed throughout their breeding range, the highest breeding densities in North America occur along the Gulf Coasts of Louisiana and eastern Texas (Figure 1).

Assigned a Continental Concern Score of 12/20 by Partners in Flight and designated a species of Low Concern by the North American Waterbird Conservation Plan.

Northern populations are medium-distance migrants that spend winters along the coasts of the southeastern United States and Mexico and in the Caribbean Islands.

Principally small fish but aquatic and terrestrial invertebrates are also taken, as well as amphibians, reptiles, and small mammals. Tools, such as twigs, may be used to attract prey items.

A platform of small twigs usually placed in a tree or shrub close to water. Typically a solitary nester but some birds nest in small, loose colonies that rarely number more than 10 to 20 pairs. 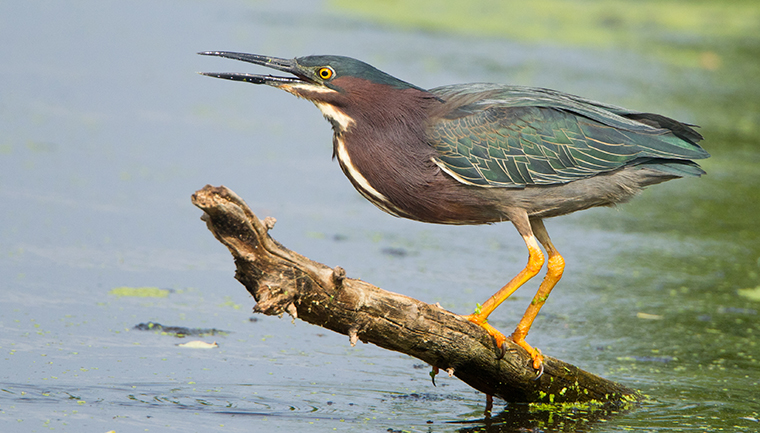 Breeding distribution and relative abundance of the Green Heron in North America based on the federal Breeding Bird Survey, 2011–2015 (Sauer et al. 2017).

In the early 1930s, Roberts (1932) described the Green Heron as a species restricted to the southern half of the state and most common along the Mississippi River valley from the Twin Cities south to the Iowa border. The most northerly report was of a nesting pair with young along the St. Croix River in Pine County. Sherburne and Pine Counties were the northern limit of its breeding range in eastern Minnesota; in western Minnesota the heron was absent north of Lincoln County. Occasional reports of birds collected in eastern North Dakota and Manitoba led Roberts to speculate that “it may be a straggler in northern Minnesota but thus far has eluded observation.” Confirmed nesting records (nests with eggs or young) were limited to the Pine County record and to three east-central counties: Carver, Hennepin, and Ramsey.

More than 40 years later, Green and Janssen (1975) reported an increasing number of summer reports from northern counties, including as far north as Lake of the Woods, Marshall, and St. Louis Counties. Breeding, however, remained limited to those counties south of Crow Wing and Pine. At the time their book was published, the Green Heron was considered a separate North American species (B. virescens). The bird belongs to a group of small herons that display varying degrees of differences in plumage and size. Their taxonomic relationship with one another has been and continues to be debated among ornithologists. When they are lumped together they are often collectively referred to as the Green-backed Heron (B. striatus). When they are split, three species usually are recognized: the Green Heron (B. virescens), the Striated or Mangrove Heron (B. striatus), and the Galapagos Heron (B. sundevalli) (Davis and Kushlan 1994).

When Janssen published his updated account in 1987, the species had continued its northward expansion in the state. Breeding had been confirmed as far north as southern St. Louis County in the east and Clearwater County in the west. Summer reports further north continued to increase, as did reports from the southwestern corner of the state. Since 1970 breeding had been confirmed in a total of 15 widely distributed counties. When Janssen’s book was published, the Old World’s Striated Heron was taxonomically combined with North America’s Green Heron and they were collectively referred to as the Green-backed Heron (B. striatus).

Beginning in the late 1980s, field biologists with the Minnesota Biological Survey documented a total of 188 breeding season locations across much of the state. Records were found from Houston County in the southeast to Rock County in the southwest and north to the Canadian border in Roseau County. Records remained sparse from the northeastern and north-central regions. Records in southeastern Minnesota were largely limited to the Mississippi River corridor (Minnesota Department of Natural Resources 2016).

Meanwhile, the taxonomic debate about the relationship among members of the Butorides genus, as well as their relationship to other members of the heron family, continued. In 1998, the North American Green Heron was, once again, officially delineated as a separate species, B. virescens (American Ornithologists’ Union 1998). As several ecologists have pointed out, much remains to be learned about this intriguing genus and additional changes may still lie ahead (Davis and Kushlan 1994). For now, Minnesota’s smallest member of the heron family is again known as the Green Heron.

Also in 1998, Hertzel and Janssen published an updated map of all county nesting records documented since 1970 for all Minnesota breeding species. A total of 27 counties were delineated for the Green Heron. Most were restricted to southern and central regions of the state.

MNBBA participants reported a total of 974 Green Heron records in 15.4% (732/4,754) of the surveyed atlas blocks and in 17.0% (398/2,337) of the priority blocks. Breeding was confirmed in just 1.8% (84) of the surveyed blocks (Figures 2 and 3; Table 1). Observed in 81 of Minnesota’s 87 counties, the Green Heron was absent only from Cook, Kittson, and Lake of the Woods Counties in the north and from Martin, Pipestone, and Traverse Counties in the west. Breeding evidence was documented in a total of 38 counties (1 block straddled Sibley and Le Sueur Counties); 20 of the counties were additions to the list published by Hertzel and Janssen (1998). All 38 were within the core of the species’ breeding range, extending from southeastern Minnesota, throughout the Greater Twin Cities metropolitan region, and north as far as Beltrami, Itasca, and St. Louis Counties.

A statewide landcover suitability model for the Green Heron was developed using MNBBA data (Figure 4). The model predicts the most suitable habitat is located in east-central Minnesota north to the southern edges of the extensively forested landscape of northern Minnesota and west through the prairie-forest ecotone. Elsewhere in southern and western Minnesota, forested floodplains, especially the upper Minnesota River valley, also provide quality habitat opportunities.

The Green Heron has clearly expanded its range northward since Roberts first summarized its status nearly one hundred years ago. MNBBA breeding records in northern Itasca and St. Louis Counties are nearly 150 miles north of the Pine County record documented by Roberts in 1919. Davis and Kushlan (1994) also noted a northward range expansion across the middle of the continent in the twentieth century, as well as an expansion north along the Pacific Coast. In neighboring Wisconsin the birds were documented as far north as the southern shore of Lake Superior during the state’s first atlas (1995-2000), but historical accounts make it unclear if this represented a range expansion or if the birds were always present statewide but largely undetected in early years (Cutright et al. 2006). During its first state atlas (1983-1988), Michigan observers noted an increase in the number of reports from the Upper Peninsula. Once again, biologists were unsure if this represented a real breeding range expansion or the dispersal of post-breeders (Chartier et al. 2013). Once the nesting season is over, Green Herons are known to wander over large distances, presumably in search of quality foraging habitat prior to migration (Davis and Kushlan 1994). 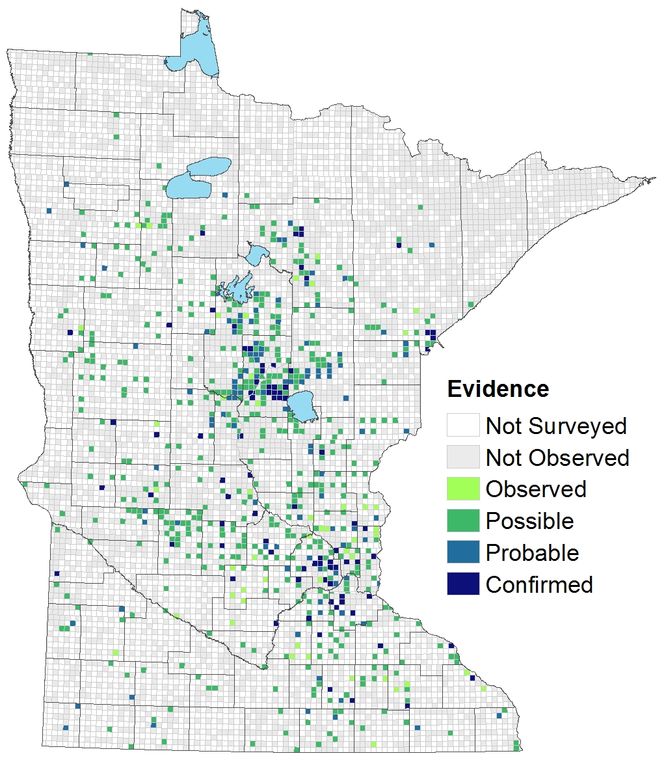 Breeding distribution of the Green Heron in Minnesota based on the Breeding Bird Atlas (2009 – 2013).

Summary statistics of observations by breeding status category for the Green Heron in Minnesota based on all blocks (each 5 km x 5 km) surveyed during the Breeding Bird Atlas (2009-2013).

Summary statistics for the Green Heron observations by breeding status category for all blocks and priority blocks (each 5 km x 5 km) surveyed during the Minnesota Breeding Bird Atlas (2009-2013). 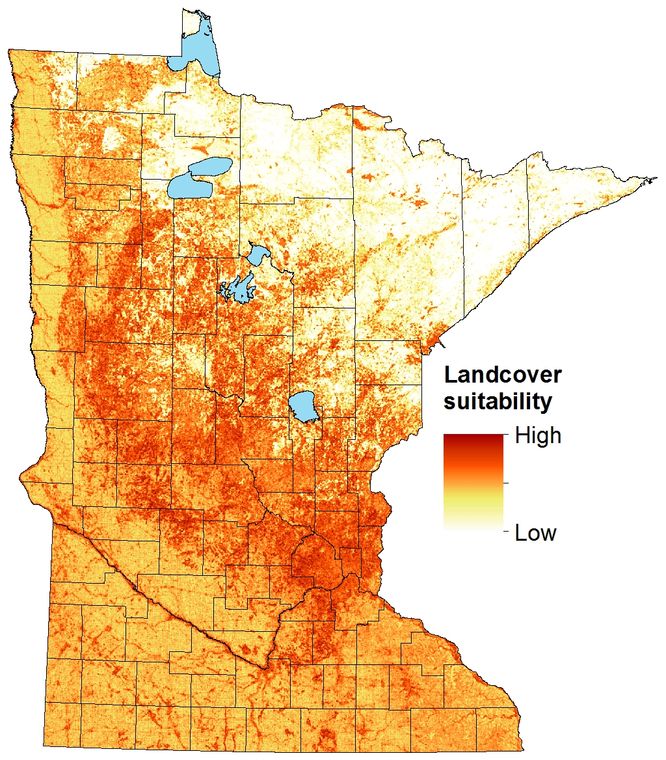 Landcover suitability of the Green Heron in Minnesota based on habitat, landscape context, and climate data gathered during the Minnesota Breeding Bird Atlas (2009-2013) using the MaxEnt modeling approach. 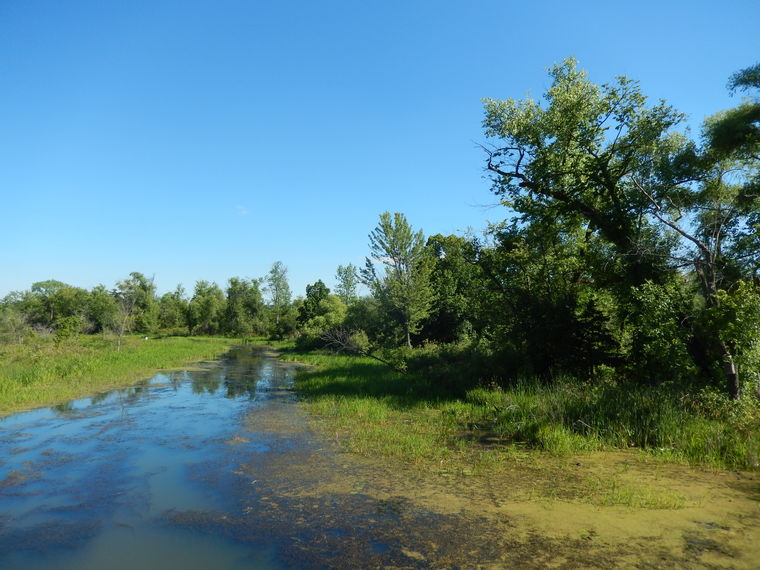 Typical breeding habitat of the Green Heron in Minnesota (© Lee A. Pfannmuller).

Given its largely solitary nesting habits and its secluded wetland habitats, it is difficult to assess the size and status of the Green Heron’s population. Biologists did not even venture an estimate of its continental population size when they prepared the North American Waterbird Conservation Plan, noting simply that insufficient data were available (Kushlan et al. 2002). Several years later, biologists preparing the Upper Mississippi River/Great Lakes Waterbird Conservation Plan provided population estimates for two of the bird conservation regions within the heron’s breeding range: the Eastern Tallgrass Prairie and the Prairie Hardwood Transition Regions. Their combined estimate was approximately 55,000 breeding pairs. These regions comprise less than 10% of the species’ entire breeding range (Wires et al. 2010).

Sparsely distributed throughout North America, the Green Heron is most abundant in the Gulf Coastal Prairie region of southern Louisiana and Texas and in the Florida peninsula (Figure 1). In the Gulf Coastal Prairie, an average of 5 herons are observed on federal Breeding Bird Survey (BBS) routes; in the Florida peninsula an average of approximately 3 herons are observed on BBS routes. This compares to less than 1 bird per route in 32 of the 43 states where the Green Heron has been observed on BBS routes, including Minnesota (Sauer et al. 2017). Although the heron does not appear to be an abundant species anywhere in its breeding range, like so many wetland inhabitants, its solitary habits challenge most monitoring programs, especially the roadside protocol of the BBS.

Despite its limitations for monitoring wetland birds, the BBS is the only long-term data set available for the species. Unfortunately, because the Green Heron is encountered so infrequently along most routes, the statistical robustness of its trend lines is compromised in all states and regions where an average of less than one bird is observed per route. This is true not only for Minnesota, but also for the entire BBS sample area in North America. Only those regions and states where more than one bird per route is encountered provide reliable statistical trends. Overall, there is no state or ecological region in North America where Green Heron populations demonstrate a significant increase. Of the seven southern regions where an average of more than one bird is encountered per route, five have demonstrated significant declines that range from 1.92% per year to as high as 3.71% per year since 1966 (Sauer et al. 2017). Across the entire BBS region, the data are categorized as imprecise but also demonstrate a significant average annual decline of 1.77% per year. Factors responsible for the widespread decline are not known, but undoubtedly the large-scale loss and degradation of wetlands is a likely candidate at play. BBS data in Minnesota suggest a stable population.

When the North American Waterbird Conservation Plan was first published in 2002, the Green Heron was designated a species of Low Concern (Kushlan et al. 2002). At the time the assessment was made, data suggested that the population was increasing. It also was considered a widespread species with no significant threats to its breeding habitat. A more recent assessment has assigned it a moderate Continental Concern Score of 12/20 (Partners in Flight 2017). Unfortunately, the general absence of information on the species’ true status and population size is an impediment to understanding its true conservation status.

The heron’s ability to utilize a variety of altered habitats, such as reservoirs and stormwater ponds, provides a level of adaptability and flexibility that helps guard against the loss and degradation of natural wetland habitats. Although its vulnerability to warming temperatures is considered relatively low, further study is warranted, since wetlands are particularly at risk in a more arid environment (North American Bird Conservation Initiative 2010). In the meantime, concerted efforts to protect and restore wetlands will help secure the future of this shy yet clever wetland inhabitant.