A regular breeding species and migrant; the House Wren was an abundant species during the Minnesota Breeding Bird Atlas (MNBBA).

The breeding range of the House Wren extends from British Columbia east across the central Canadian provinces and the very southern reaches of the eastern provinces, and south throughout the northern and central United States. Relatively abundant throughout its range; the highest breeding densities occur in central Canada and the north-central United States, including southern Minnesota (Figure 1).

Assigned a Continental Concern Score of 5/20 by Partners In Flight.

A short- to medium-distance migrant that winters in the southern United States and Mexico.

Primarily insectivorous, gleaning terrestrial invertebrates, such as bugs, grasshoppers, caterpillars, and beetles, from trees, shrubs, and the ground. 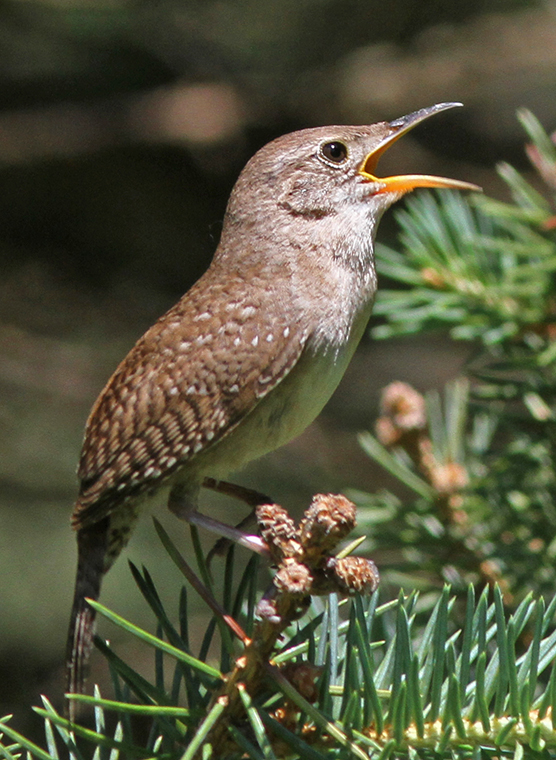 Breeding distribution and relative abundance of the House Wren in North America based on the federal Breeding Bird Survey, 2011–2015 (Sauer et al. 2017).

In Minnesota, Roberts (1932) considered the species to be an abundant summer resident throughout the state. He wrote:

Not only is the House Wren a common bird among the dwellings of man but it is especially common throughout all the wild places of the state, particularly the desolate, burned-over areas of the north.

Confirmed nesting records (nests with eggs or young) were available from 8 counties, stretching from Fillmore County in the southeast, to Chisago, Grant, Isanti, McLeod, and Kandiyohi Counties in central Minnesota, and then north to Polk and Marshall Counties in the northwest. Inferred nesting records (nests or fledged young) were available from Goodhue, Lake of the Woods, and St. Louis Counties.

Roberts always paid close attention to the taxonomic details of species that resided in the state. In the case of the House Wren, two North American subspecies were recognized: the darker Eastern House Wren (Troglodytes aedon aedon), and the lighter Western House Wren (T. a. parkmani). At the time, Minnesota was thought to include the dividing line between the two subspecies. Roberts, however, believed that most of Minnesota’s House Wrens were so lightly colored that they must be the western subspecies. He sent a series of skins from the university’s collections, mostly from eastern Minnesota, to another expert for closer examination. The response back confirmed Roberts’s suspicions: “They are the most typical specimens of parkmani I ever saw.” Today these two subspecies are still recognized, along with 29 other subspecies that are all restricted to Central and South America (Johnson 2014).

Little had changed when Green and Janssen (1975) and later Janssen (1987) prepared their updated accounts of the species’ status. The House Wren remained a widespread and abundant species throughout the state. Janssen identified 61 counties where nesting had been confirmed since 1970. Hertzel and Janssen (1998) later added another 7 counties to the list.

MNBBA participants reported 4,750 House Wren records from 50.4% (2,402/4,769) of the surveyed atlas blocks and from 68.7% (1,605/2,337) of the priority blocks. Breeding was confirmed in a total of 547 blocks (Figures 2 and 3; Table 1). The birds were reported in all 87 Minnesota counties and were confirmed nesting in all but 3 counties: Traverse, Lincoln, and Nobles. Although they were found statewide, House Wrens were least abundant in northeastern Minnesota and the far northern counties of north-central Minnesota.

The MNBBA predicted distribution map clearly predicts a strong association with the more densely developed regions of the state, especially the Twin Cities metropolitan region, where the species is a frequent inhabitant of backyard nest boxes and the region’s small, fragmented woodlands (Figure 4). Moderately high breeding densities are predicted in scattered pockets throughout southern and western Minnesota, especially along the prairie-forest border and in riparian habitats throughout the northwest. In the Laurentian Mixed Forest Province, suitable habitat is restricted to deciduous woodlands in the southern and western edges of the province and to residential communities, the Iron Range, and sites of recent disturbance. The latter includes the site of the 2007 wildfire near the Canadian border north of Grand Marais.

The House Wren remains a widely distributed species 100 years after Roberts described it as an abundant statewide resident. Its sparse distribution in the northern counties, however, is likely a more “recent” phenomenon. During the late 1800s and early 1900s, the region’s vast stands of pine, aspen, birch, fir, and spruce were harvested, leaving behind a landscape of slash that was prone to fires. As Roberts noted in 1932, the open country, where snags abounded, provided ideal habitat for the House Wren. Today harvested sites still provide suitable habitat but at a much reduced scale now that federal, state, and county forest lands are responsibly managed. A similar scenario also has been noted in northern Michigan. Early logging cleared much of the state’s northern forest and likely resulted in a northern range extension of House Wrens until the mid-20th century, when second-growth forests that provided far less suitable habitat dominated the landscape (Brewer et al. 1991).

The major change in the species’ range over the years has been its steady southward expansion as forests in the eastern United States were cleared for agriculture and residential development. It became a common and widespread species in Ohio in the mid-1800s (Rodewald et al. 2016), reached West Virginia by the late 1800s, and South Carolina and Georgia by the 1940s and 1950s. Farther west, it reached northern Alabama by the early 1970s, and central and southern Missouri by the 1960s. Along the leading line of expansion the wrens are usually present as disjunct populations. The birds first become established in residential areas and then expand outward from these centers of abundance (Johnson 2014). 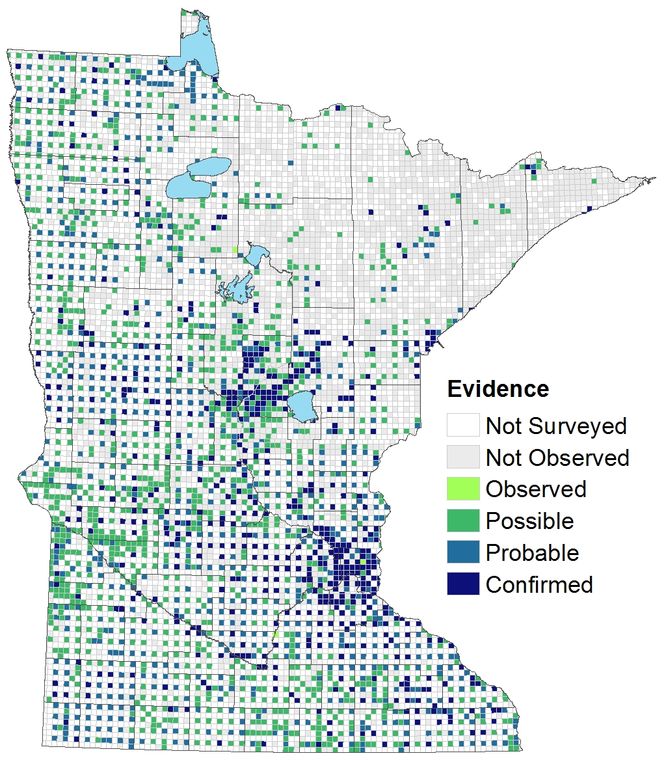 Breeding distribution of the House Wren in Minnesota based on the Breeding Bird Atlas (2009 – 2013).

Summary statistics of observations by breeding status category for the House Wren in Minnesota based on all blocks (each 5 km x 5 km) surveyed during the Breeding Bird Atlas (2009-2013).

Summary statistics for the House Wren observations by breeding status category for all blocks and priority blocks (each 5 km x 5 km) surveyed during the Minnesota Breeding Bird Atlas (2009-2013). 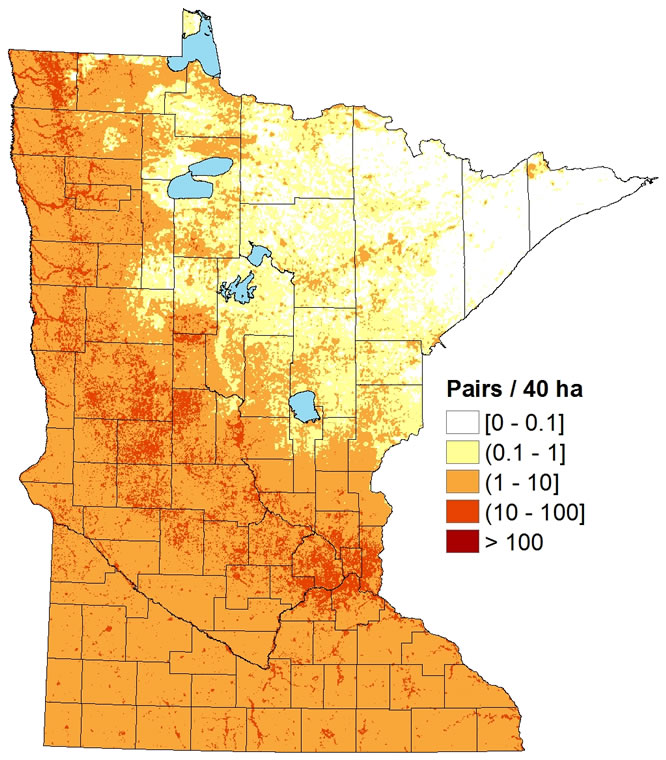 Predicted breeding distribution (pairs per 40 hectares) of the House Wren in Minnesota based on habitat, landscape context, and climate data gathered during the Minnesota Breeding Bird Atlas (2009-2013) using the General Linear Modeling method with an adjustment for detectability.

House Wrens occupy a wide range of semiopen habitats in the Upper Midwest, including the edges of upland and lowland deciduous forests, burns and clear-cuts with residual trees, farmsteads, parklands, and suburban lots (Danz et al. 2007). Their primary requirements are the presence of dead trees or dead tree limbs that provide suitable cavities, clearings or canopy gaps, and brushy tangles in the understory for feeding (Figure 5). Nest boxes attract them to sites that lack natural cavities but only if other important features, such as suitable cover and food resources, are also available. Large contiguous forest landscapes are generally avoided, with the exception of recently harvested areas or burns.

The National Forest Bird (NFB) Monitoring Program in northern Minnesota and Wisconsin found the birds were restricted entirely to open, dry sites that were typically young regenerating stands, and to small towns (Niemi et al. 2016). Data collected within 200 m of MNBBA point counts where House Wrens were detected showed a strong preference for oak forests and development (Figure 6). Croplands and grasslands that are used are invariably along woodland edges that provide the required nesting cavities. 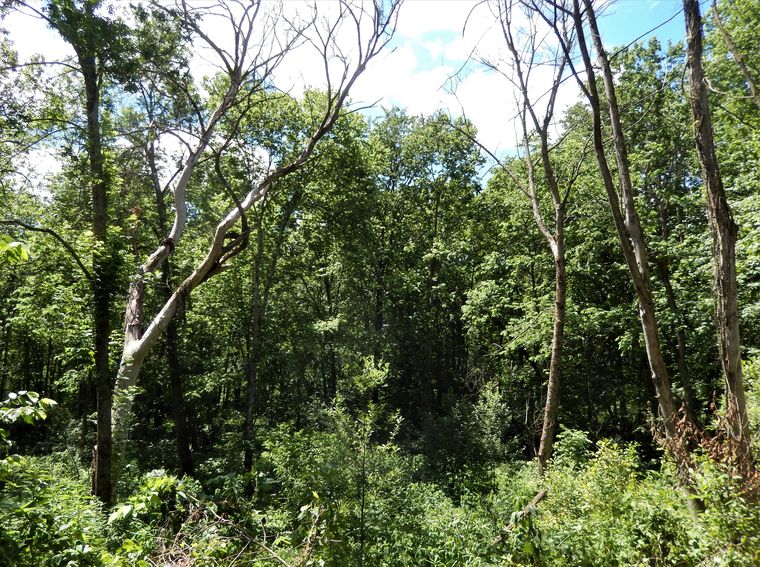 Typical breeding habitat of the House Wren in Minnesota (© Lee A. Pfannmuller).

Habitat profile for the House Wren based on habitats within 200 m of point counts where the species was present during the Minnesota Breeding Bird Atlas (2009-2013).

Monitoring data collected by the federal Breeding Bird Survey (BBS) was used by biologists to generate a North American population estimate for the House Wren of 42 million breeding adults (Rosenberg et al. 2016). That estimate has not changed since 2013, when an estimated 2 million birds occurred in Minnesota, or 4.7% of the continental population (Partners in Flight Science Committee 2013). MNBBA data was used to test the BBS-derived estimates and generated an estimate that was more than twice as large, at 4.9 million adults (95% confidence interval of 4.5 to 5.4 million adults).

The House Wren is an abundant species throughout the central United States and Canada; Minnesota is one of many states that support high breeding densities (Figure 1). An average of 16 House Wrens are reported on BBS routes in Minnesota each year. This compares to a survey-wide average of only 6 wrens per route (Sauer et al. 2017). Local breeding densities can be quite high. In southern Ontario, for example, 40 territorial pairs per 40 ha were reported in birch-oak savanna stands; in South Dakota 14 to 70 pairs per 40 ha were reported in farmland woodlots (Johnson 2014). In northern Minnesota, where the species is relatively uncommon, only 0.04 and 0.02 House Wrens were detected per 40 ha on the Chippewa and Superior National Forests, respectively. In this extensively forested landscape, House Wrens were far outnumbered by the more common Winter Wren (1.4 pairs/40 ha and 2.1 pairs/40 ha detections, respectively, on the Chippewa and Superior National Forests) (Niemi et al 2016).

Since the BBS began monitoring landbird populations in the mid-1960s, the population of House Wrens has remained fairly stable, with a significant annual increase of 0.26% per year since 1966. Populations in Minnesota demonstrate a very similar trend line (Figure 7). Overall, biologists estimate that House Wrens have experienced an 8% increase in numbers since 1970 (Rosenberg et al. 2016).

The provision of nest boxes certainly enhances local House Wren abundance. Other environmental factors that impact survivorship are not well studied. Only one study, in central California, has analyzed changes in abundance relative to a suite of environmental factors. It found that both precipitation during the preceding 36 months and winter temperatures immediately preceding the breeding season were the best predictors of abundance (Verner and Purcell 1999). The authors speculated that drought conditions and cold winters could both affect insect abundance. 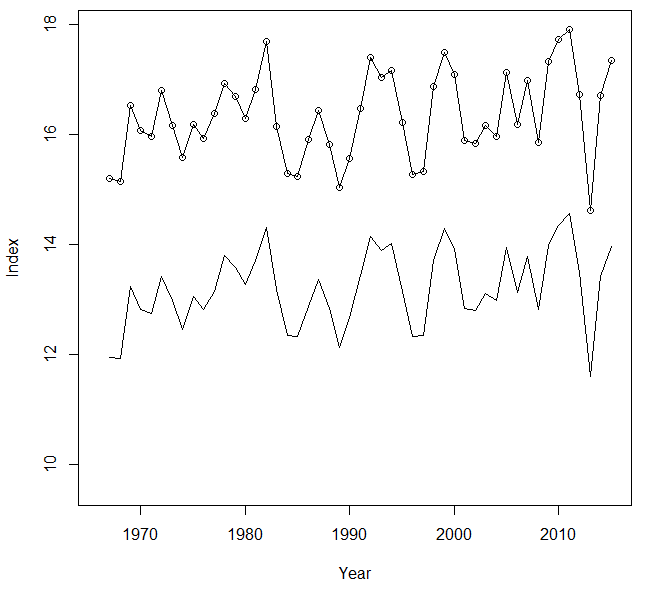 Breeding population trend for the House Wren in Minnesota from 1967-2015 based on the federal Breeding Bird Survey (Sauer et al. 2017).

An abundant species that has adapted well to human-modified landscapes, the House Wren is not a conservation priority at either the federal or state level. It has been assigned a relatively low Continental Conservation Score of 5/20 (Rosenberg et al. 2016). Threats to both the breeding and wintering ranges are deemed low, and “The State of the Birds 2010 Report on Climate Change” classified the species as having low vulnerability to climate change (North American Bird Conservation Initiative 2010). This familiar backyard bird, a bundle of tireless energy, is well positioned to be an abundant member of Minnesota’s avifauna for years to come.