A summer visitant, formerly breeding in 1992 and 1993; a regular spring migrant and fall vagrant. The Kentucky Warbler was very rare during the Minnesota Breeding Bird Atlas (MNBBA).

The range of the Kentucky Warbler encompasses most of the eastern states, from southern Pennsylvania west to Iowa and then south to east Texas with fingers along the wooded river valleys in Nebraska, Kansas, and Oklahoma. At the northern edge of its range there are pockets of breeding birds in New York; northern portions of Ohio, Indiana, and Illinois; southern Michigan; and southeastern Wisconsin. The core of its range, where many of its highest densities occur, is along the Ohio River and the southern Mississippi River drainage (Figure 1).

Assigned a Continental Concern Score of 14/20 and designated a Yellow Watch List species by Partners in Flight.

A long-distance migrant that winters from the Caribbean coast of southern Mexico through Central America to the northern areas of Columbia and Venezuela. It may also be found in winter in Bermuda and some of the Caribbean islands.

Feeds on many types of insects, spiders, and some berries that are gleaned from vegetation.

A cup nest placed on or near the ground in dense understory vegetation, often at the base of a shrub, hummock, or low branch of a small tree. 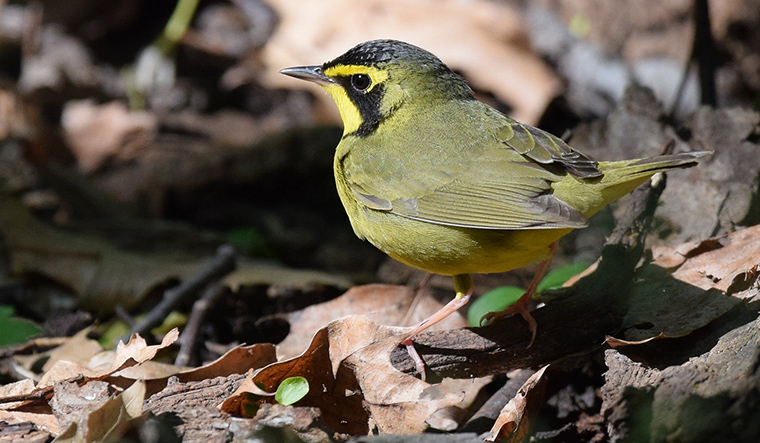 Breeding distribution and relative abundance of the Kentucky Warbler in North America based on the federal Breeding Bird Survey, 2011–2015 (Sauer et al. 2017).

In 1811 Alexander Wilson “discovered this handsome warbler and named it for the State in which he found it most abundant. The name is not inappropriate, for Kentucky is not far from the center of its abundance in the breeding season” (Bent 1953). The Kentucky Warbler was not part of the known avifauna of Minnesota in 1932, when Roberts wrote his iconic book, The Birds of Minnesota. The first sighting was a persistent singing male near St. Mary’s College, Winona County, in July 1952 (Theodore 1952). A few scattered records occurred over the next few years: Hennepin County, May 22, 1956; Winona County 1958; Hennepin County, September 6, 1959; and Mower County, September 5, 1960. Noteworthy records after 1960 were as follows: Hennepin County, May 23, 1961 (road-kill specimen given to the Bell Museum; Huber 1961); Hennepin County, August 29, 1963 (below the Coon Rapids dam, Mississippi River, Pearson 1963); and Lake Superior, July 24, 1964 (found on board an ore boat by Capt. J. P. Perkins in Lake Superior [fide JCG]; Green and Janssen 1975).

In 1964, a singing male was observed singing from June 3 through July 16 on the Anoka County side of the Mississippi River below the Coon Rapids dam (Pearson 1964), where one had also been seen in 1963. In 1965 purportedly the same male was in the same location and was observed several times from May 19 to June 30 (Pearson 1965; Huber 1966). This indication that the Kentucky Warbler might breed in Minnesota was finally confirmed by observations in Nicollet County at Seven Mile Creek in 1992 (Filter 1993) and 1993 (Fall 1994).

During the years from 1965 until breeding was confirmed in 1992 and 1993, many observations, both in the spring migration and during summer, indicated probable breeding of the Kentucky Warbler in the southeastern part of the state. Data from the Minnesota Ornithologists’ Union (MOU) seasonal reports during this period (1965–1992) showed that migration records from May 25 to early June were concentrated in the southeastern counties: Hennepin, Washington, and Anoka south to Le Sueur, Olmsted, Rice, Mower, Winona, and Houston, with a few outliers in Lyon, Redwood, and Lac qui Parle. The only northern record was from Itasca State Park in Hubbard County on June 4, 1978 (McKenzie 1978). In addition to the three fall records mentioned above, there are two fall migrant records: Hennepin County, October 6, 1987 (Carlson 1987) and Dakota County, August 20, 1988 (Bolduc et al. 1989).

After the Kentucky Warbler was documented nesting in Minnesota and its MOU status changed in 1983 from casual to regular but rare, there are no more descriptive notes of interest about Kentucky Warbler sightings. This skulking warbler is notoriously hard to spot in the dense vegetation of its preferred habitat, and most observations are of singing males. No formal studies in Minnesota of this warbler have been conducted at the northern edge of its range. The species has a specialized habitat that requires a large patch of mature, moist hardwood forest with a dense understory. This habitat exists in southeastern Minnesota, especially along the Minnesota and Mississippi Rivers, and in other pockets of protected old‑growth hardwood forest. After the early 1990s, the number of observations in the MOU seasonal reports increased substantially. The Kentucky Warbler is known for its high site fidelity. A search of the MOU records for warbler sites in conjunction with observations that give the actual locality in the county where the species was observed during the late May to July breeding season identified habitat areas where the Kentucky Warbler has had a persistent presence.

There are several such places along the Minnesota River, from the bend of the river at Mankato to its junction with the Mississippi River. These include Seven Mile Creek, Nicollet County (1991–1996, 2002); Williams Nature Center, Blue Earth County (2000–2009, 2011); and Minneopa State Park, Blue Earth County (2000, 2001, 2004, 2007). In Hennepin County, Murphy-Hanrehan Park Preserve has many records from 1998 to 2008. Other places along or near the Minnesota River show incidental records in appropriate habitat: Chamberlain Woods Scientific and Natural Area (SNA), LeSueur County; Rasmussen Woods, Mankato, Blue Earth County; and Louisville Swamp, Minnesota Valley National Wildlife Refuge (NWR), Scott County. Other protected areas with multiple incidental records and appropriate habitat include Lost Valley Prairie SNA, Washington County (Longley 1990); Lebanon Hills Regional Park, Dakota County; Lac qui Parle State Park, Lac qui Parle County; and Nerstrand Big Woods State Park, Rice County. Because of the secretive nature and dense habitat used by this warbler, actual breeding evidence has not been documented. Diligent efforts over long periods of time in these places are required to demonstrate whether or not a sustainable breeding population exists in Minnesota.

Participants in the MNBBA reported four records of the Kentucky Warbler, all within the distribution and landscapes described above (Figure 2). These records, except the one from Blue Earth County, were new state locations for the Kentucky Warbler. The first record, coded “possible” in T101R14c, was on June 4, 2009, in Lake Louise State Park in Mower County. The habitat was described as “mature deciduous forest (‘basswood-bur oak-green ash forest’),” but another visit on July 2, 2009, did not relocate the bird. The second record, also coded “possible,” was in T37R20d and detected on July 17, 2009, along the St. Croix River in Chisago County at the junction of County Roads 3 and 5. The third record, coded “probable” in T28R22a, was of a bird seen and photographed June 11–18, 2013, by many observers in Battle Creek Regional Park/Battle Creek West in Ramsey County, east of the Mississippi River and north of Pig’s Eye Lake. The final record was coded as “probable” from 2009 and identified on the MOU website. It included a precise location (T108R27d) and was seen by many observers from May 29, 2009, to June 11, 2009. An observation on June 3, 2009, included two males singing to one another at Williams Nature Center, where the Kentucky Warbler was previously present from 2000 to 2008.

Although rare statewide in Wisconsin, the Kentucky Warbler has had a breeding population in the southwestern portion of the Western Coulee and Ridges Ecological Landscape since 1924 (Grant County) and other areas south and north of the confluence of the Wisconsin and Mississippi Rivers (Robbins 1991). In Iowa, there is an old nesting record from 1884 and many other subsequent records, 1960–1995, mostly east and south, including a nesting record (1975) from Allamakee County, which borders Minnesota (Kent and Dinsmore 1996). Iowa’s breeding bird atlas (1985–1990) reported eight confirmed nesting records. 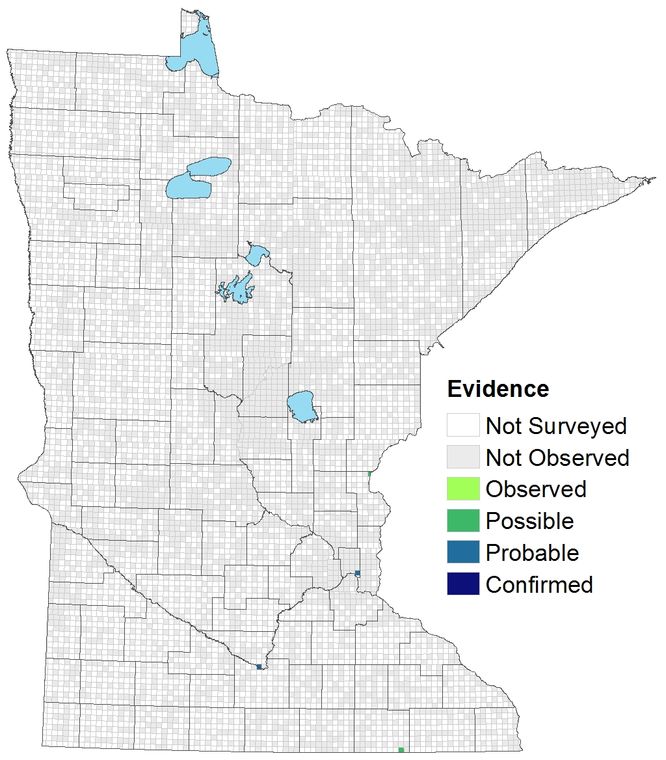 Breeding distribution of the Kentucky Warbler in Minnesota based on the Breeding Bird Atlas (2009 – 2013).

Summary statistics for the Kentucky Warbler observations by breeding status category for all blocks and priority blocks (each 5 km x 5 km) surveyed during the Minnesota Breeding Bird Atlas (2009-2013).

The Kentucky Warbler is a southern deciduous forest species with a specialized preferred habitat. It is found in “deep shaded woods with dense, humid thickets, bottomlands near creeks and rivers, ravines in upland deciduous woods, and edges of swamps” (Kaufman 1996). About the species McDonald (2013) stated, “Well-developed ground cover for ground nesting, and a thick understory, are essential.” Robbins et al. (1989) classified it as a forest interior and area-sensitive species. Field studies and species accounts have emphasized that forest patch size and riparian corridor width are important for the occurrence of this species (McDonald 2013). A structurally varied understory and the existence of small overstory gaps also appear to be important habitat features.

Field studies of the Kentucky Warbler across its range show much variation in the species’ density, depending on geography and habitat. Using the Breeding Bird Survey routes, one study gave three examples of the Kentucky Warbler with high relative abundance on routes with prime habitat (humid deciduous forest, dense second growth, and swamps): two routes in Louisiana with means of 24.7 birds per route and 19.5 birds per route, respectively, and one from Indiana with a mean of 12.3 birds per route (Price et al. 1995). Another study by Gibbs and Faaborg (1990 [cited in McDonald 2013]) included densities in different forest patch sizes across the breeding range of the Kentucky Warbler. They found “[l]arge forest tracts (>500 ha) contain an average of 2.2 males per 10 ha, compared with 1.4 males per 10 ha in smaller (<140 ha) fragments.” 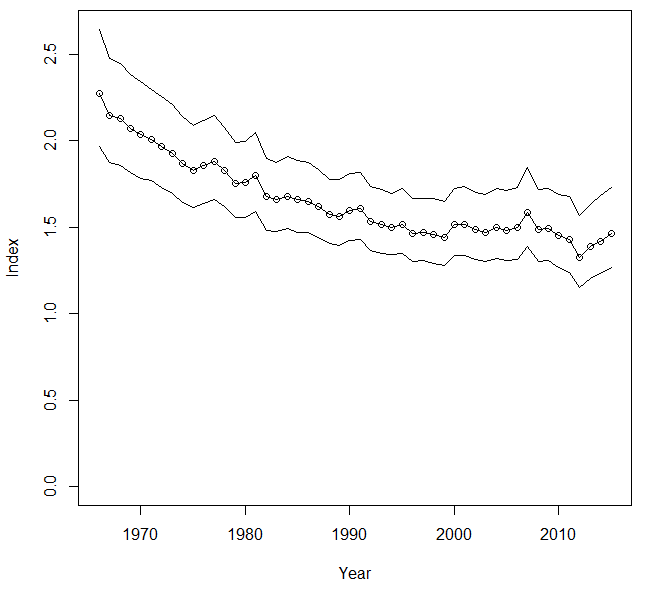 Breeding population trend for the Kentucky Warbler in Minnesota from 1967-2015 based on the federal Breeding Bird Survey (Sauer et al. 2017).

Partners in Flight (Rosenberg et al. 2016) puts the Kentucky Warbler on its Watch List with a Conservation Concern Score of 14/20, which indicates that significant conservation actions are needed to reverse declines and reduce threats. The high score was primarily based on the species’ long-term population decline and the threats to its nonbreeding population. The U. S. Fish and Wildlife Service, Midwest Region, lists this warbler as a Bird of Conservation Concern due to its declining population trend. Reasons for the decline include breeding habitat loss, forest management practices that simplify the structure and composition of forest stands, and habitat loss on its wintering grounds in the tropics. Three states that have completed a second Breeding Bird Atlas show a negative change between surveys: Maryland and the District of Columbia (−38% between 1983–1987 and 2002–2006), Pennsylvania (−29% between 1983–1989 and 2004–2009), and New York (−71% between 1980–1985 and 2000–2005). The summary of reasons for the decline shown in New York’s atlas is typical of other comments: “threats include loss and fragmentation of mature, moist deciduous forest, primarily from development as well as loss of dense shrubby understory in remaining forests, the result of overbrowsing by white-tailed deer and lack of disturbance in closed-canopy forests” (McGowan and Corwin 2008).

In its review of North American birds, the National Audubon Society (2017) did not identify the Kentucky Warbler as susceptible to climate change. However, Loss et al. (2014) identified the species as vulnerable to building collisions. They calculated that the Kentucky Warbler’s risk of fatal collisions was 20.2 times greater with low-rise buildings and 14.0 times greater with high-rise buildings compared with the average bird. Greater awareness and management of understory habitat and efforts to reduce susceptibility to collisions are essential if this reclusive species is to remain part of Minnesota’s avifauna.