A regular breeding resident and migrant; the Least Bittern was an uncommon species during the Minnesota Breeding Bird Atlas (MNBBA).

The species has a unique distribution that stretches from the coast of Canada’s Maritime Provinces, south to the Caribbean and portions of Central America, and west through the eastern deciduous forest region. It is absent from much of the Appalachian region and has scattered populations in the Great Plains and several western states. Because it is a sparsely distributed, secretive marsh bird, its relative abundance across its breeding range is poorly known. The only long-term monitoring data available suggest that breeding densities may be highest along the Gulf coast of Louisiana (Figure 1).

Assigned a Continental Concern Score of 10/20 by Partners in Flight and ranked a High Concern by the North American Waterbird Conservation Plan ; designated a Species in Greatest Conservation Need by the Minnesota Department of Natural Resources.

A short-distance migrant that winters in the southeastern United States, Central America, and the Caribbean Islands. 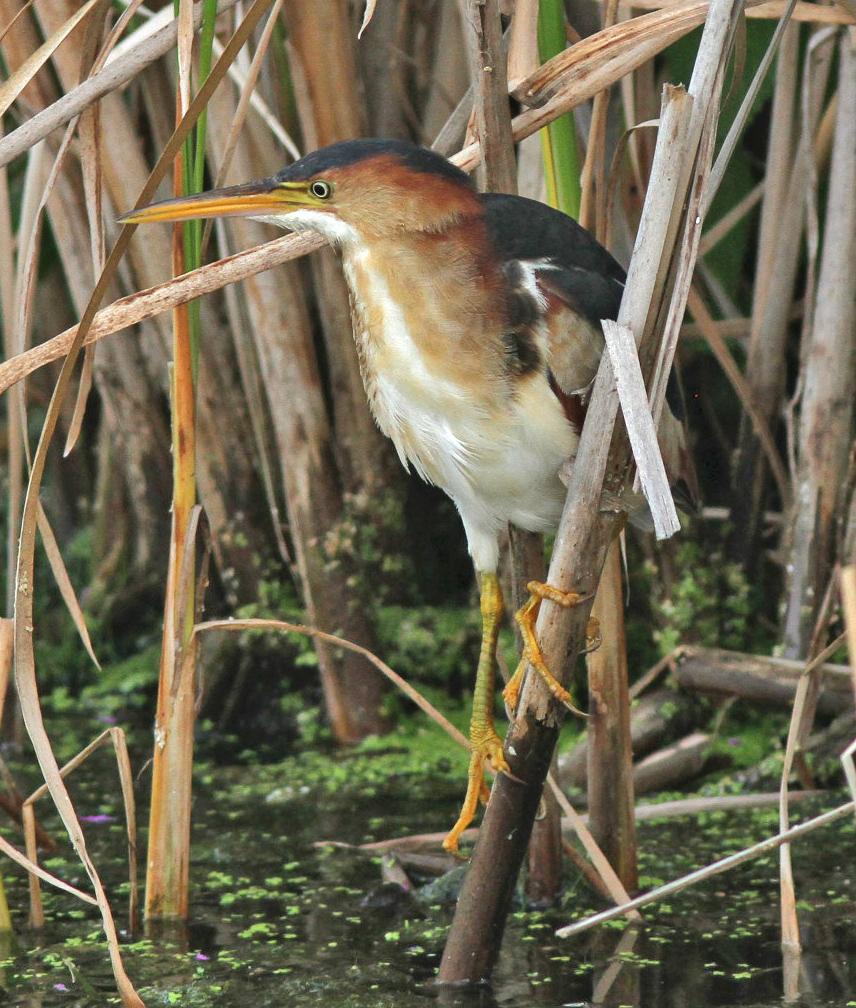 Breeding distribution and relative abundance of the Least Bittern in North America based on the federal Breeding Bird Survey, 2011–2015 (Sauer et al. 2017).

In the early 1900s, Roberts (1932) wrote that “this nimble little acrobat of the reeds is a common inhabitant of the more extensive sloughs and cane-fringed lakes of southern and western Minnesota.” Although observations were apparently common from Heron Lake in Jackson County, north to the Canadian border, and east along the Minnesota River valley, confirmed nesting records (nests with eggs) were available from just 6 counties: Carver, Hennepin (Minneapolis), Meeker, Marshall, Otter Tail, and Polk. Commenting on the lack of records from northern Minnesota, Roberts wrote, “Our files contain no records for the heavily forested portion of the state although suitable lowlands are not lacking.”

Green and Janssen (1975) described the Least Bittern as a resident throughout much of the state, with the exception of northeastern Minnesota and the adjacent counties of Itasca and Koochiching. Several years later, Janssen (1987) included a distribution map that excluded northeastern Minnesota and all or portions of the adjacent north-central counties, the Red River valley, and all of southeastern Minnesota with the exception of the backwaters of the Mississippi River. He noted that the number of observations in southern Minnesota was increasing, but it was unclear if this represented an increase in Least Bitterns or an increase in the number of observers. Seven counties where nesting had been confirmed since 1970 were delineated: Clearwater, Marshall, Nicollet, Polk, Pope, Stearns, and Wright. Hertzel and Janssen (1998) later deleted Clearwater from the list.

Intensive survey work by the Minnesota Biological Survey, beginning in the late 1980s, documented 68 breeding season locations. Surprisingly, more than one-third of the locational records were from wetlands in southwestern Minnesota (Minnesota Department of Natural Resources 2016).

During the course of the MNBBA, participants reported Least Bitterns in 2.2% (103/4,741) of the surveyed atlas blocks and in 2.1% (49/2,337) of the priority blocks. Breeding was confirmed in only 4 blocks (Figures 2 and 3; Table 1). Bitterns were reported in 57 of Minnesota’s 87 counties and were reported breeding in 5 counties: Cass/Morrison (one block straddled both counties), Hennepin, Scott, and Nicollet. All but Nicollet were additions to the list published by Hertzel and Janssen in 1998.

Although the MNBBA records were few in number, they were widely scattered throughout many regions of the state. The species remains rare throughout northeastern Minnesota, from Pine County north across the Arrowhead region and west to Beltrami, Itasca, and Koochiching Counties. The exception was one Probable record in northern St. Louis County and a Possible breeding record in northern Koochiching County. In southeastern Minnesota, they were restricted primarily to the Mississippi River valley. It is difficult to know if the paucity of Least Bittern records is an accurate representation of its abundance or a consequence of its secretive nature. For instance, the wetland habitats of the Least Bittern are usually inaccessible, and many observers are unfamiliar with its vocal repertoire. These challenges were also noted by Roberts (1932), who commented, “the elusiveness and quiet disposition of the Least Bittern, combined with its slender form and perfect mimicry of its surroundings in color and action, cause it to be overlooked even where it is dwelling commonly.”

Roberts’s (1932) broad assertions regarding the species’ abundance in southern and western Minnesota in the late 1800s and early 1900s suggest that the small number of MNBBA records represents a decline in overall abundance in the past century. Certainly the significant loss of wetlands, especially in southern Minnesota, supports that conclusion. It seems, however, that the extent of the bittern’s distribution in the state has changed very little. It is encouraging that despite the extensive loss of wetlands in the southern and western regions of the state, the species retains a presence in these regions. Although there are sufficient wetlands to support a robust population of Least Bitterns in the northeastern and north-central counties, these habitats appear to be unsuitable to the species, whose Minnesota breeding distribution represents the northern periphery of the species’ breeding range in North America.

A comprehensive review of the species in 2009 makes no mention of historical change to its distribution anywhere within its breeding range (Poole et al. 2009). The loss of 68% of the wetlands in southern Ontario resulted in a significant decline in Least Bitterns in the province prior to the initiation of its first breeding bird atlas in 1981 (Cadman et al. 2007). Similar declines were noted in Ohio between the 1930s and 1960s (Rodewald et al. 2016), and in Michigan between the 1950s and 1980s (Chartier et al. 2013). Declines in both states were due primarily to the loss of critical wetland habitats. Despite these declines in abundance, the species’ overall distribution remained relatively unchanged. 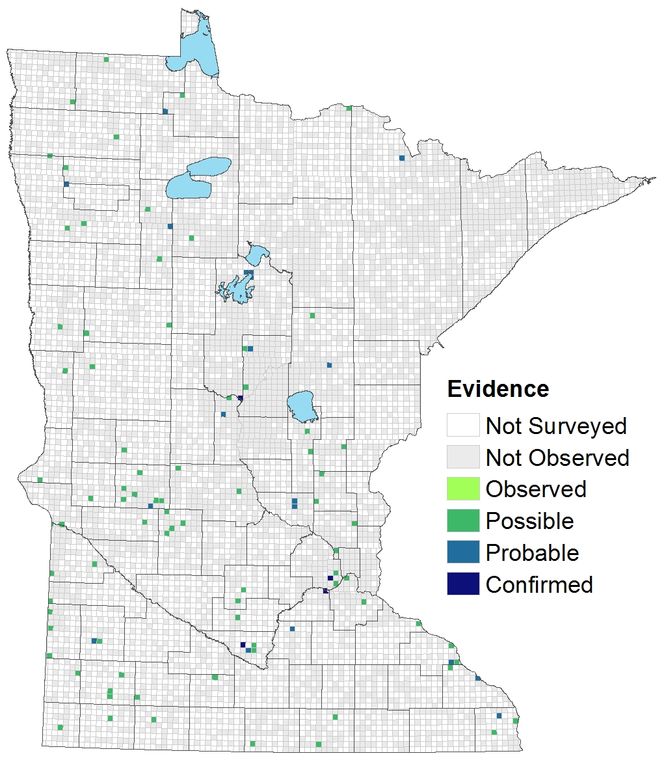 Breeding distribution of the Least Bittern in Minnesota based on the Breeding Bird Atlas (2009 – 2013).

Summary statistics of observations by breeding status category for the Least Bittern in Minnesota based on all blocks (each 5 km x 5 km) surveyed during the Breeding Bird Atlas (2009-2013).

Summary statistics for the Least Bittern observations by breeding status category for all blocks and priority blocks (each 5 km x 5 km) surveyed during the Minnesota Breeding Bird Atlas (2009-2013).

Least Bitterns nest in both freshwater and brackish wetlands with dense stands of emergent vegetation, including cattails, bulrushes, and sedges (Figure 4). Clumps of wetland shrubs also may be present. Hemi-marshes, with an equal dispersion of vegetation and open water, are preferred. Drier wetland sites are usually avoided, as are sites with dry, muddy openings and/or shorter vegetation. In addition to natural wetland basins and floodplain wetlands, impoundments also are used (Poole et al. 2009).

The Least Bittern differs in one important aspect from its relatives in the heron family. The taller herons and egrets use their long legs to wade through the shallows of the wetlands, searching for food items. The smaller Least Bittern often avoids wading, instead deftly maneuvering through the dense emergent vegetation by grasping shoots with its feet and then dipping down to access food morsels in the deeper waters below. Such behavior enables them to utilize permanent, deep-water sites that might otherwise seem unsuitable for such a small bird (Bent 1926; Poole et al. 2009).

Studies in Iowa suggest the species may be area sensitive, preferring wetlands larger than 10 ha in size. Other studies, however, have found Least Bitterns in wetlands as small as 0.4 ha (Poole et al. 2009). 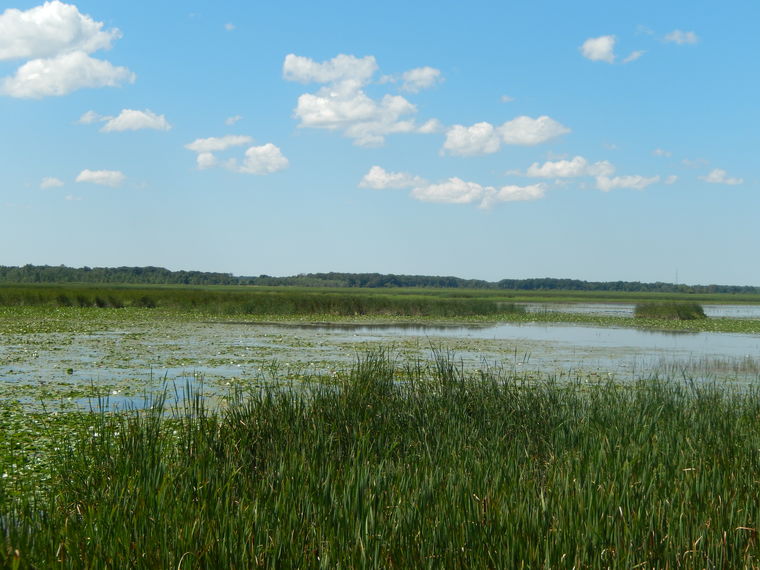 Typical breeding habitat of the Least Bittern in Minnesota (© Lee A. Pfannmuller).

Estimates of the size of the Least Bittern population are, at best, professional guesses. In 2001, waterbird biologists established a rough estimate of only 128,000 breeding adults for the nominate subspecies found in North America, Ixobrychus exilis exilis (Wetlands International 2016). Statewide estimates are not available.

Estimates of breeding densities range from a low of 0.4 calling males per ha in Wisconsin to 1.6 calling males per ha in Mississippi (Waterbird Conservation for the Americas 2016). Because the species is so secretive, the federal Breeding Bird Survey (BBS) does not adequately monitor Least Bittern populations. Survey-wide it only has been detected on 114 of the nearly 2,900 routes that are surveyed each year; nearly 32% (36) of the routes with detections are located in just two states, Florida and Louisiana (Sauer et al. 2017). By comparison, Least Bitterns have been detected on only 4 of Minnesota’s 84 BBS routes. An average of less than 1 bird (0.03) is detected on BBS routes in Minnesota; in Louisiana the average number of bitterns per BBS route is 2 (Sauer et al. 2017).

The species’ sparse distribution and low detectability on BBS routes result in a trend line that has low reliability, even at the national level. Nevertheless, BBS data are the only long-term data available and suggest that the population trend may be stable, with a nonsignificant increase of 0.17% per year (Sauer et al. 2017).

Monitoring data are also collected by the Great Lakes Marsh Monitoring Program coordinated by Bird Studies Canada. Begun in 1995, the binational program surveys marsh birds and frogs at more than 5,000 locations in the Great Lakes Basin. From 1995 until 2012, Least Bitterns were found to have a nonsignificant annual decline of 1.9% per year (Tozer 2013).

Despite the absence of solid information, there is a consensus among long-time bird watchers that the species has declined. Others, however, contend that knowledge of the species is too sparse to make any accurate assessment of its population trends (Poole et al. 2009). A recent assessment of the species’ status by Partners in Flight (2017) resulted in assigning the Least Bittern a population trend score of three out of five, largely suggesting that data are uncertain or that the population is either stable or experiencing a small decrease. Certainly the large-scale loss and degradation of wetlands throughout eastern North America are likely to have negatively impacted such a wetland-dependent species to some degree.

The Least Bittern’s very small population size, its uncertain population status, and its dependence on wetland habitats are primary factors influencing the species’ Continental Concern Score of 10/20 (Partners in Flight 2017) and its assignment as  a species of High Concern by the North American Waterbird Conservation Plan (2006). The U.S. Fish and Wildlife Service designated the Least Bittern a Species of Conservation Concern in the Upper Midwest Region (U.S. Fish and Wildlife Service 2008). It is also a High Conservation Priority in the Upper Mississippi River and Great Lakes Region Joint Venture area (Soulliere et al. 2007) and is designated a species of High Concern by the Regional Upper Mississippi Valley/Great Lakes Regional Waterbird Plan (Wires et al. 2010). In Minnesota, the Least Bittern has been listed as a Species in Greatest Conservation Need by the Minnesota Department of Natural Resources (2015).

Management recommendations tailored specifically to Least Bitterns are lacking. More in-depth study of the species’ breeding biology and habitat requirements would help direct site-specific conservation efforts. In the meantime, aggressive programs designed to protect and restore wetland habitats will have the greatest benefit to this species. Both the Minnesota Duck Recovery Program (Minnesota Department of Natural Resources 2006) and the Minnesota Prairie Conservation Program (Minnesota Prairie Plan Working Group 2011) have established goals for protecting, restoring, and actively managing wetland habitats throughout the western region of the state and should provide multiple benefits to all wetland-nesting species.

Unfortunately, as for all wetland-dependent species, the impacts of climate change are a major concern. The Least Bittern was among 588 birds recently analyzed by the National Audubon Society as part of a comprehensive analysis of climate change impacts on breeding birds (Langham et al. 2015; National Audubon Society 2016). Using climate data as its principal modeling tool, the analysis predicted a loss of 69% of the bittern’s current summer range by 2080. As a result of this analysis, the society classified the Least Bittern as “climate endangered.” Hopefully, biologists will learn more about this unique, secretive marsh bird before it quietly disappears from Minnesota’s wetlands.