A regular breeding resident, migrant, and accidental in winter. Lincoln’s Sparrow was uncommon during the Minnesota Breeding Bird Atlas (MNBBA).

Widely distributed across Canada from the Maritime Provinces to British Columbia (Figure 1). In the United States, this species is found in the northern portions of the upper Midwest, in the northeast, and scattered throughout the western states. The highest densities are found in British Columbia, northwestern Alberta, western Colorado, and Labrador.

Short- to medium-distance migrant, where it overwinters in the southern United States, Mexico, and northern Central America.

Arthropods and seeds or fruit primarily foraged from the ground or from low vegetation.

Cup-nest on the ground or slightly elevated in sedge, moss, or shrubs. 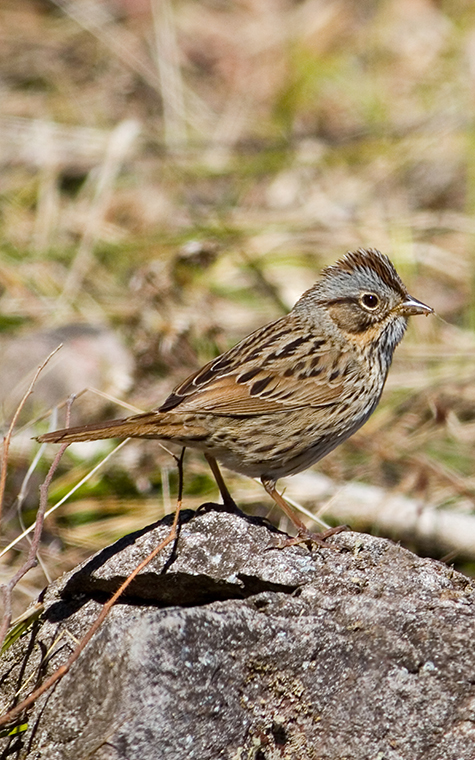 Breeding distribution and relative abundance of the Lincoln’s Sparrow in North America based on the federal Breeding Bird Survey from 2011 to 2015 (Sauer et al. 2017).

Historically, the Lincoln’s Sparrow was not known to nest in Minnesota until the mid-1930s (Roberts 1932, 1936). Roberts stated that “it may nest in the spruce swamps of the northern part of the state, but thus far there is no entirely satisfactory record of the finding of the nest.” He disputed the potential finding of a nest by Peabody near Hibbing in 1900 on the basis of a conversation with him and what he determined was insufficient evidence. He also questioned the many collections of specimens or observations from June to September from throughout Minnesota as possible late or early migrants. He summarized its breeding status in Minnesota as a “problem as to its nesting in the state remains to be definitely solved.”

The possible first nests of the Lincoln’s Sparrow were reported by Lupient (1945), who documented three nests with five eggs each found by Brother Hubert in Cook County.

Green and Janssen (1975) summarized the species’ primary breeding range as the northeastern region of the state as far south as northern Aitkin County and west to eastern Beltrami, Cass, and Lake of the Woods Counties. Besides Cook County, they included confirmed nesting in Lake County and as far south as Kelsey in St. Louis County. Janssen (1987) extended the potential breeding range south to northern Pine County and northwest to Roseau County, where a nest was found in 1976 (Nero 1982). He did not include Cass County in the breeding range. Hertzel and Janssen (1998) later added Cook County, for a total of only 2 confirmed counties since 1970.

The MNBBA included 518 breeding records found throughout most of the Laurentian Mixed Forest Ecological Province and in 2 blocks in the Tallgrass Aspen Parklands (Figure 2). A total of 6.2% of surveyed blocks (292/4,735) recorded either confirmed, probable, or possible nesting (Figure 3; Table 1). New counties with confirmed nesting included Aitkin and Koochiching. Probable nesting was documented in Beltrami, Carlton, Cass, Clearwater, Hubbard, Itasca, Lake of the Woods, and Pine Counties. Overall, the current breeding distribution of the Lincoln’s Sparrow ranges from Cook to Lake of the Woods Counties and possible nesting to western Minnesota in Becker, Marshall, and Roseau Counties and south to Mille Lacs and Pine Counties.

The probability distribution of the Lincoln’s Sparrow in Minnesota primarily predicted its highest densities in the big bog areas north of upper Red Lake as well as the bogs in the Sax-Zim area of northeastern Minnesota (Figure 4). Scattered populations were also predicted in a variety of potentially suitable habitats throughout northern Minnesota.

Data from both the MBS and the MNBBA showed a broader distribution for breeding season locations of the Lincoln’s Sparrow in Minnesota than what has previously been reported. This suggests that either the species has been overlooked or it has expanded its range since the early 1900s. Walkinshaw (1983) contemplated this same question in Michigan, where he also found the species more common than previously thought. He favored the expanded range concept because, he argued, there were “many good ornithologists 50–100 years ago and most of them were collectors.” Both Brewer et al. (1991) and Granlund et al. (1994) also supported the idea that the species’ range had expanded southward in Michigan.

Surprisingly, Ammon (1995), in her summary of the Lincoln’s Sparrow in North America, stated that no historical changes in its distribution were known, but her report did not cite the changes discussed by Walkinshaw (1983). In contrast, Cutright et al. (2006) reported that the species appeared to have retracted northward since the early 1900s in Wisconsin because there were two nineteenth century nest records from southeastern counties. Based on the Wisconsin breeding bird atlas of 1995–2000, the species was only found nesting in the northernmost counties and in relict bogs of the central and eastern parts of the state.

The two Ontario breeding bird atlases of 1981–1985 and 2001–2005 also indicated an increase southward of the Lincoln’s Sparrow (Cadman et al. 1987, 2007). They stated that the increase in the number of detections was real, but their “regional coordinators” pointed out that the increased number of detections may be a reflection of improved song recognition. It was also emphasized that the Lincoln’s Sparrow is known to be difficult to detect, even by skilled observers, because when approached the birds stop singing and skulk away. Cadman et al. also attribute an increase in breeding detections to an increase in regenerating forests.

Roberts (1932) reported, “This Sparrow had been taken or satisfactorily identified in Minnesota in every month from June to September, but the localities are scattered from the southern to the northern counties and probably are explained by late spring and early fall migrants and stray birds not on their breeding-grounds.” He admitted, however, that he had “never heard the song of the Lincoln’s Sparrow.” Unfortunately, whether its breeding range has recently expanded or whether the species had been previously overlooked remains unknown. 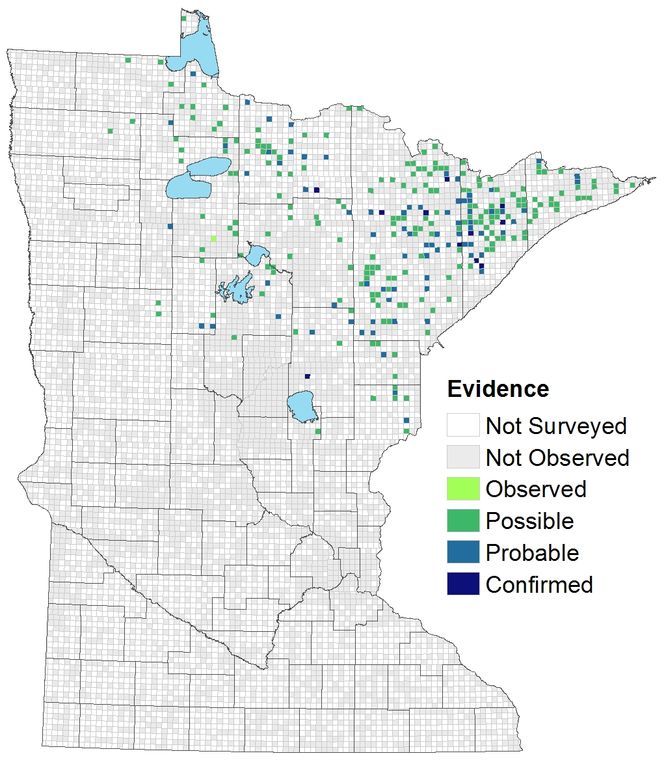 Breeding distribution of the Lincoln's Sparrow in Minnesota based on the Breeding Bird Atlas (2009 – 2013).

Summary statistics of observations by breeding status category for the Lincoln's Sparrow in Minnesota based on all blocks (each 5 km x 5 km) surveyed during the Breeding Bird Atlas (2009-2013).

Summary statistics for the Lincoln's Sparrow observations by breeding status category for all blocks and priority blocks (each 5 km x 5 km) surveyed during the Minnesota Breeding Bird Atlas (2009-2013). 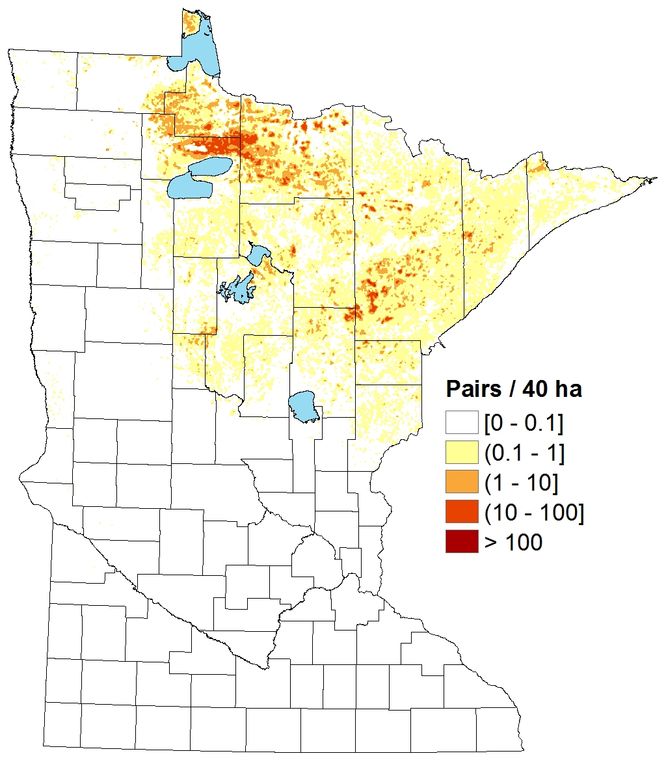 Predicted breeding distribution (pairs per 40 hectares) of the Lincoln's Sparrow in Minnesota based on habitat, landscape context, and climate data gathered during the Minnesota Breeding Bird Atlas (2009-2013) using the General Linear Modeling method with an adjustment for detectability.

The Lincoln’s Sparrow nests in open bogs and sedge meadows with understories of moss and ericaceous shrubs and frequently with scattered willows, bog birch, black spruce, or tamarack (Ewert 1982; Walkinshaw 1983; Niemi and Hanowski 1992; Cutright et al. 2006) (Figure 5). The species is also known to use early stages of recently cut forests (Walkinshaw 1983), especially when found near open bogs (Erskine 1977). Cadman et al. (2007) suggested it was an early successional habitat specialist in Ontario and may benefit from large-scale natural and anthropogenic disturbances such as fire, blowdowns, and logging activity. 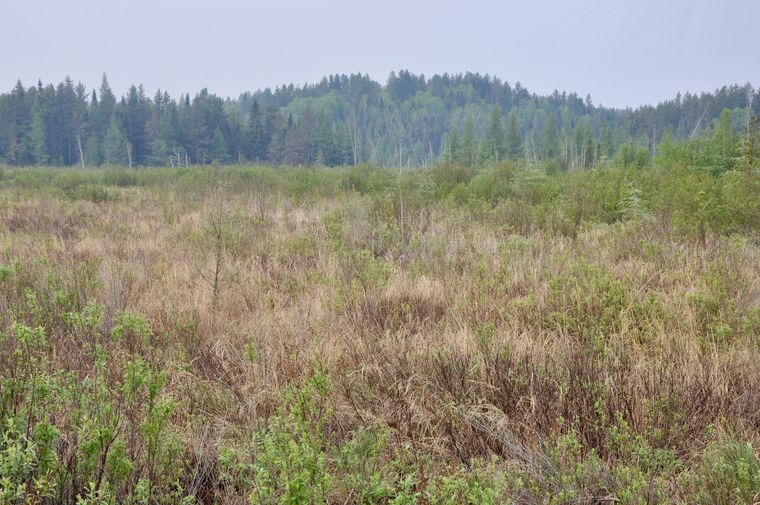 Habitat profile for the Lincoln's Sparrow based on habitats within 200 m of point counts where the species was present during the Minnesota Breeding Bird Atlas (2009-2013).

Partners in Flight (Rosenberg et al. 2016) estimated a North American population of 76 million adults, with an approximate 90,000 adults in Minnesota (Partners in Flight Science Committee 2013). Using its point count data, the MNBBA estimated the Minnesota population as more than 4 times that size, or approximately 383,000 breeding adults; however, the confidence intervals were very large which indicates substantial variation in this population estimate. The large estimate for the global population primarily was due to the extensive habitat available across Canada to Alaska, in the Rocky Mountains, and in the western coastal region. Environment Canada (2011) estimated a Canadian population of more than 50,000 adults.

Detections of the Lincoln’s Sparrow on the federal Breeding Bird Survey (BBS) were too scarce in Minnesota to confidently estimate the species’ trend, but populations throughout the Boreal Hardwood Transition Region indicated a significant decline of 2.19% per year from 1966 to 2015 (Figure 7). The decline was higher in this region compared with insignificant trends throughout Canada (−0.45% per year) and survey-wide (−0.36% per year) over the same time period. Partners in Flight (Rosenberg et al. 2016) estimated an overall 25% decline in its population from 1970 to 2014. The greatest declines were indicated in northeastern Minnesota, eastern Canada, and northern Alberta (Figure 8).

The species was too rare in the NFB program to estimate a trend in the Chippewa or Superior National Forests.

Based on point counts, mean population densities in both the Chippewa and Superior National Forests were relatively low at less than 0.10 pairs/40 ha. 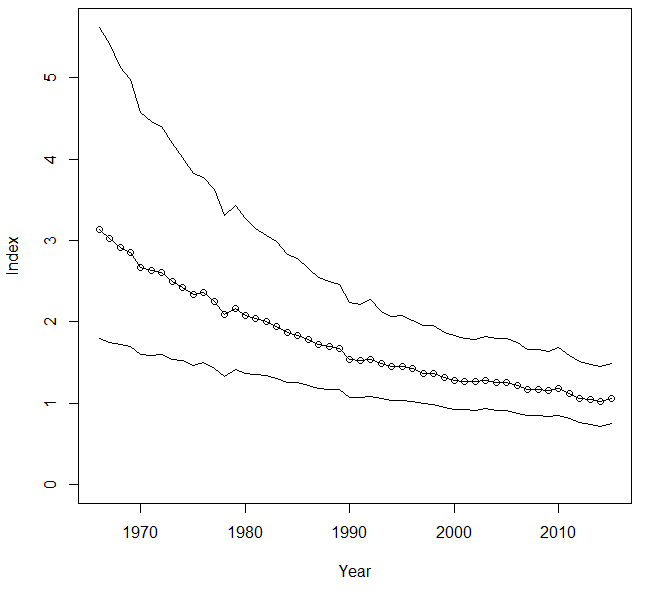 Breeding population trend for the Lincoln’s Sparrow in the Boreal Hardwood Transition Region for 1966–2015 based on the federal Breeding Bird Survey (Sauer et al 2017).

Population trend map for the Lincoln’s Sparrow in North America for 1966–2015 based on the federal Breeding Bird Survey (Sauer et al. 2017).

Partners in Flight designated a relatively low Continental Concern Score of 9/20 for the Lincoln’s Sparrow (Rosenberg et al. 2016). Despite a recent population decline, its overall high breeding population renders it of low concern. Also, few data are available on the causes for the species’ population decline. Canada, with an estimated 86% of the breeding population, suggested that BBS trends were unreliable because routes only cover the southern portion of the species’ breeding range (Environment Canada 2014). The authors proposed that few threats to the species are currently known.

In its review of species susceptible to climate change in North American, Langham et al. (2015) and the National Audubon Society (2015) did not list the species as vulnerable. This was likely due to the considerable habitat that appears to be available in northern Canada and Alaska.